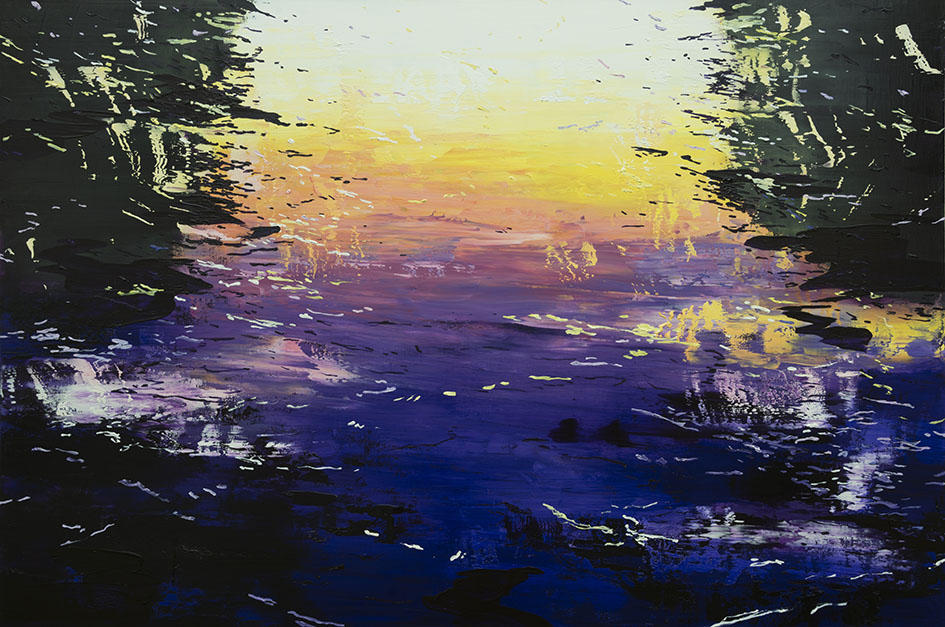 Takako Hojo says she first painted the subject of water in 2004. This was in a piece entitled Blind Touch - Momoike 2, where she represented the surface of a pond near her house. Hojo used whites, pinks and dark greens, drifting to and fro, reminiscent of the transient tone of trees. These were painted across a canvas showing pale cherry blossoms suggestive of spring. We can see that water led her to a concern with light, and such was the genesis of her interest in that topic. This attention to light was manifested in various ways in Hojo’s previous works, such in rays filtering through thick leaves, or falling on lush flowers, or else dazzling light reflected on snow lying on tree branches, or sunshine altering the appearance of mountains crowned with snow.
In her latest work, Hojo again focuses on water surfaces. It is as if she was returning to basics. I prefer not to use the term ‘water surface’ paintings anymore, however, since the pieces also deploy wide manipulations in brushwork, using dots, lines and facets, evincing a highly sophisticated sensitivity to colour. This was also present in Hojo’s earlier works, and has appeared intermittently since. In her new paintings, water and light engross the viewer leaving them hardly even able to blink. More than before, we now feel a profound sense of space, which is brought about by Hojo weaving together her previous techniques. Water surfaces are now not just ‘surfaces’ of layered pigments. Rather, they show a situation in which two things compete, one the landscape as recalled in our brain, the other, a sense of representation itself, that is, the materiality of paint suddenly standing out, sometimes in wild brushstrokes on the canvas. Hojo’s picture planes admirably express ungraspable charms, and we sense this all the more strongly when recalling the trajectory she has followed thus far.
People might be tempted to assess Hojo’s latest work under the familiar notions of representation and abstraction. But can these grasp the essence of what she does? Such concepts might rather lead to a confinement of her painting under banal interpretations, and words that became misread over time. Undaunted by any anxiety, Hojo paints against these worn-out views. I hope visitors will enjoy Takako Hojo’s work, which seriously engages with the act of painting itself, pursuing issues of modes of being for paint in the contemporary world. I invite viewers to stand before her work as if addressing nature itself. I’m sure that as you look you will quietly forget the passage of time.