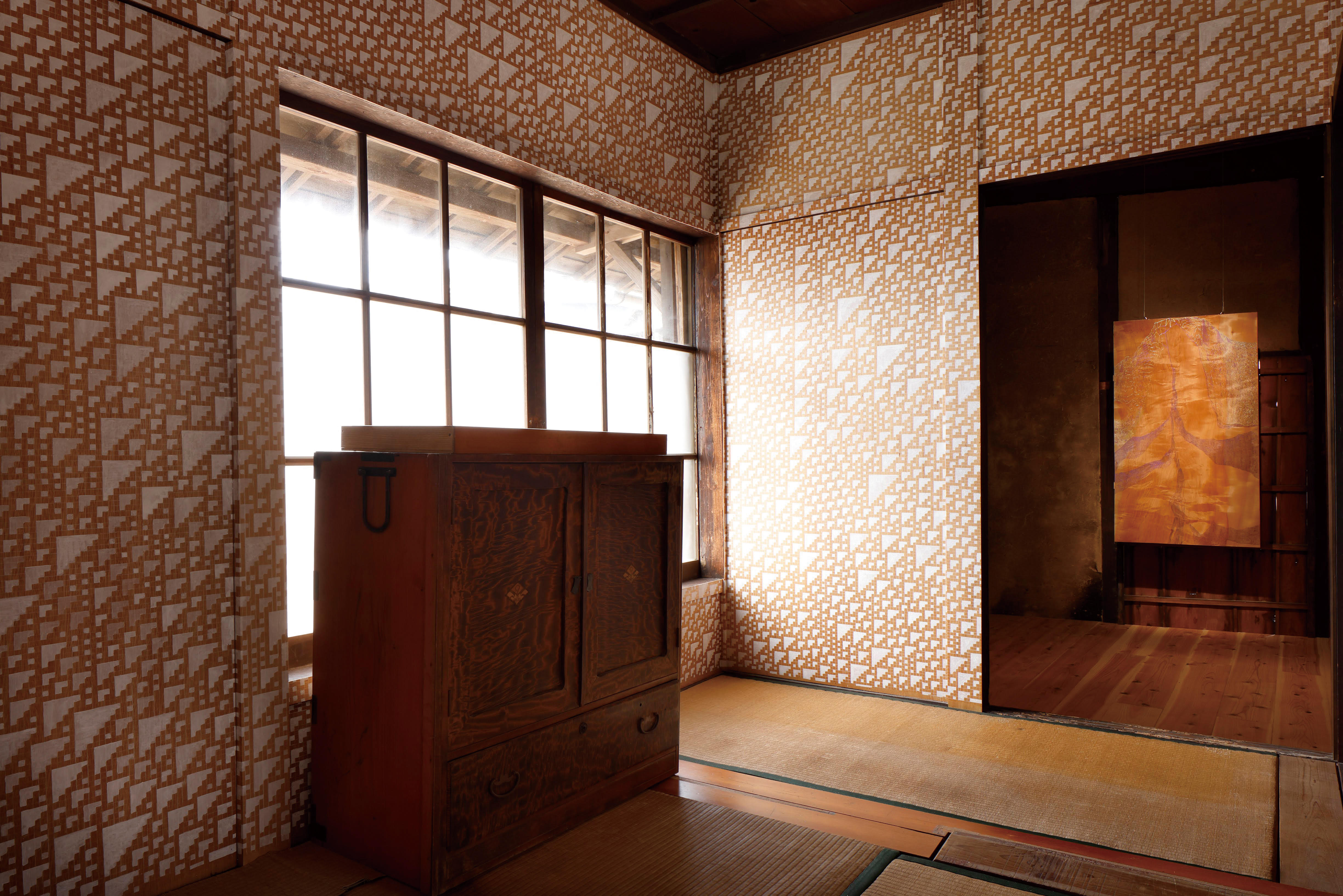 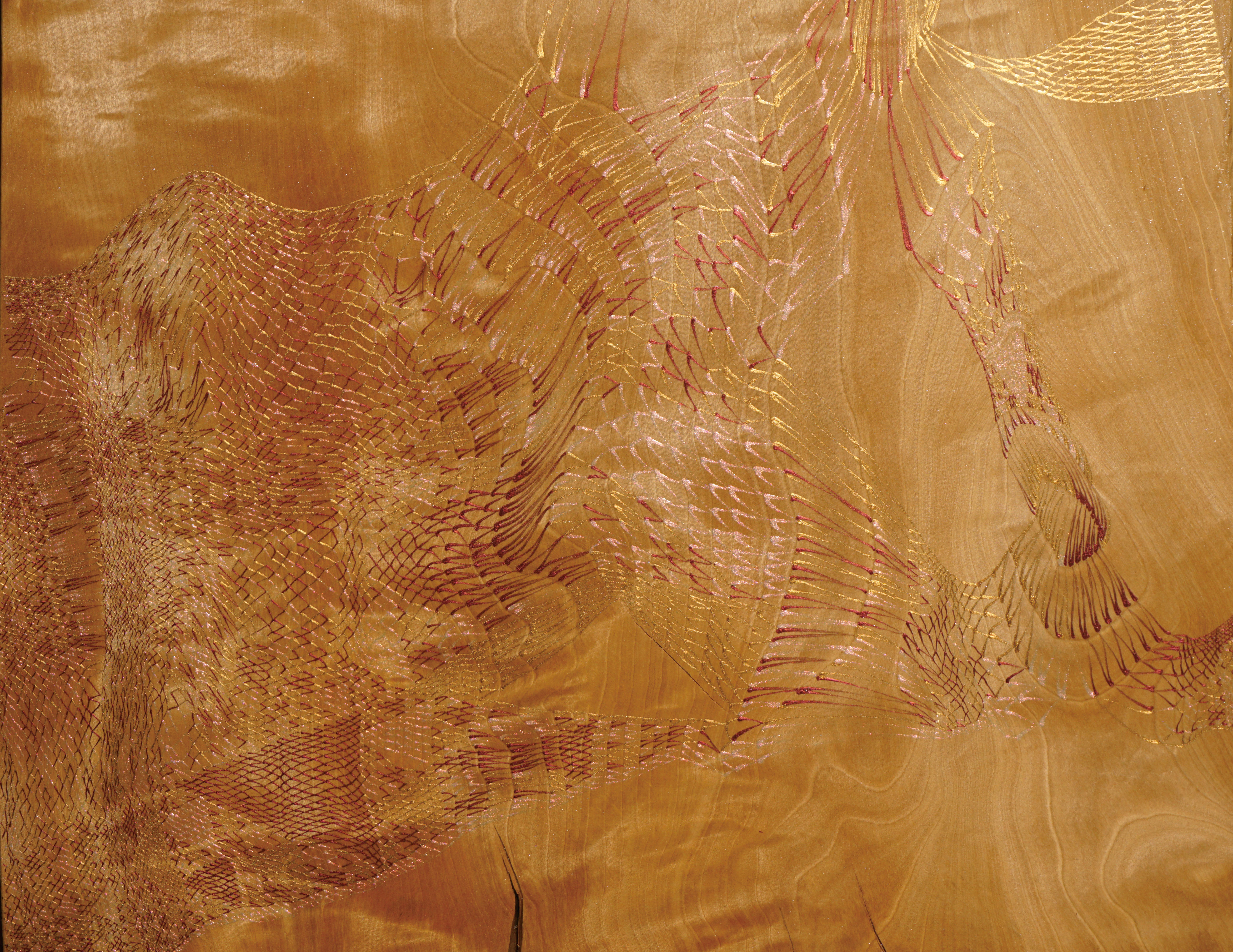 On the work of Goro Murayama——

Goro Murayama was my recommendation when I served on the Artist-selection Advisory Bboard for the Setouchi Triennale 2019 (Setouchi), and while on site he produced a mural in a traditional house at Ogi Island. The same year I curated the Aichi Triennale (Aichi), and when I asked Murayama to participate, he created a performance and installation piece.

Not many visitors would have realized both works were by the same artist. At Aichi the theme had been ‘Taming Y/Our Passion’, and Murayama based his piece on ‘gait identification’, a developing technology that identifies people by walking patterns. He created movements to elude identification, making these into a dance piece with a marching pace set by a drum that gradually collapsed. This installation consisted of a green backdrop and decoys intended to confuse the radar and infrared.

Murayama’s mural at Setouchi stood in marked contrast with his Aichi piece. It looked like a cutting-edge scientific experiment into physical properties of movement, but in fact, the thrust of his Setouchi mural was automation too. It was a drawing made according to rules he had set up for himself. Murayama stayed on the island working with a dozen collaborators producing the mural according to codes, in a proliferation of web-like lines. Both works were connected by an interest in the automation of recognition.

They also had a second feature in common: ‘deviation from automation’, or what we might call ‘error’, and ‘noise’. Murayama looked at what cannot be grasped automatically, and the betrayals of mechanised systems. Such was the crux, but the Setouchi work also allowed spaces for freedom and choice by the collaborators, inviting randomness and uncertainty. If at first the works looked oppositional, in fact they were fundamentally connected.

Next to the mural, Murayama displayed a group of shells. These linked the automatically-generated lines to natural forms. They prompted questions of whether identification systems liked ‘gait identification’ can also be regarded as natural.

Consistency in an artist’s work, across many contexts and in works with different appearance is, to my mind, a sign of excellence. The wider the variety in which it is expressed, the more attractive exhibitions will be. Murayama is such a figure.

Born in Kyoto in 1990. Master’s degree in Intermedia Art at Tokyo University of
the Arts in 2017.
Solo exhibition “Kazuto Imura – mirrorrim” at Mitsukoshi Contemporary Gallery (2021)
Sense Island Sarushima Dark Museum 2021,MATSUMOTO Architecture +ArtFestival(2022)
With his on-going research on vision and recognition, he is focusing on optical works using half-mirrors, spherica mirrors and LED.
His recent interest lies in the history of mirrors and lookism, Imura is reconstructing the materials and techniques of the mirrors, and creating “Invisible Mirrors” that do not reflect you. 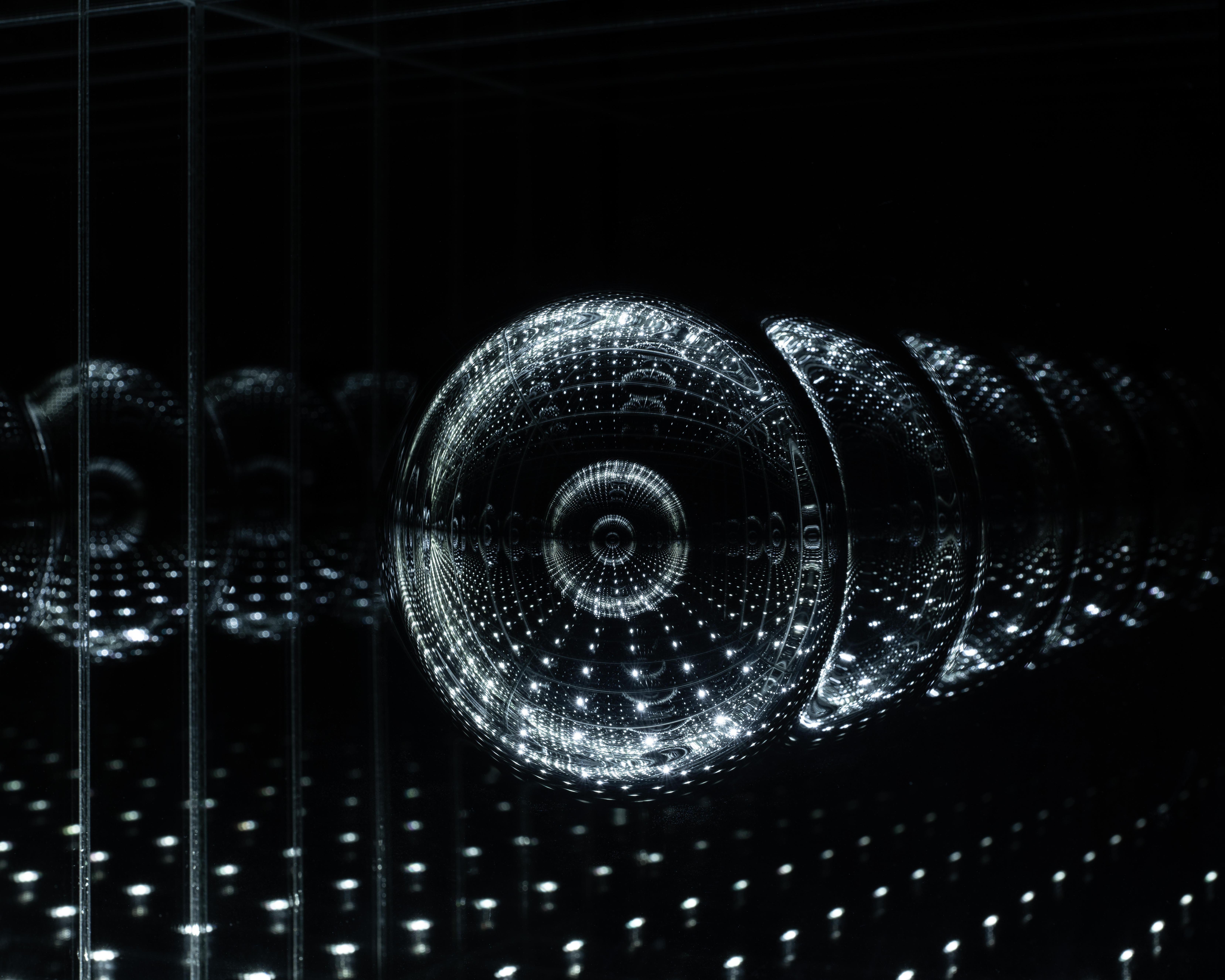 We never see ourselves directly. It is only others who see us, and what they see remains inaccessible to us. Like the surface of water in ancient times, the mirror is a device that allows us to see ourselves. We usually do not remember the first time we gazed into a mirror and recognized the face in it as our own, but before long we learned that this is the face that belongs to us (that this is what we look like) and saved that knowledge to our memory. If enough time passes to let a gap emerge between the face in the mirror and the face we have committed to memory, it is like we are brought back to that first time we recognized ourselves in the mirror. I think of mirrors as feedback systems for such self-recognition. Within an infinity mirror, the images continue onward into a bottomless depth, repeating ad infinitum, a little more distant from the present moment with each iteration.

Mirrors reflect objects placed in front of them as images. They are depthless surfaces reflecting light; to paint a mirror is to paint the image reflected in the mirror. What is a mirror without an object to reflect? After all, a mirror is named for its function, not for its materials. Kazuto Imura’s “mirror in the rough,” constructed using glass and metal, is made from the same materials as a mirror, but light scatters within it, and objects are not reflected. While mirrors appear like depthless spaces reflecting flat images, Imura’s artwork seems like an object that encapsulates light and space.

At a time when we have grown used to (or tired of) seeing our own faces in video chats, a mirror that does not show us ourselves prompts us to appreciate once more what mirrors actually are. In his “wall-ordered” series, created using half-mirrors and self-made mirrors, an order emerges from the repetition of images in the space between the mirrors. These box-like, deep artworks have no object to reflect; they are mirrors reflecting mirrors. Somewhere between the mirror plates, geometric rules let a microscopic virtual space emerge. And like with “mirror in the rough,” the gaze of the viewer sinks down into the deep darkness of the proliferating space.


Goro Murayama’s practice employs systems to introduce complicated and life-like behaviors into the process with which he creates his works. Instead of placing every aspect under the complete control of the artist, Murayama tries to use random and iterative mechanisms to facilitate organic rhizomatic change during the production of a work. However, his approach does not aim to de-center or remove the artist by entrusting the production of the work to systems. Rather, it is a systems-based approach in which the artist’s direct input becomes one variable among many to influence the final state of the artwork.

Murayama takes inspiration from the cellular automaton, a mathematical model to repeatedly calculate how the state of a cell in a grid changes depending on its neighboring cells, with complex patterns emerging from the sum of these changes. In a sense, Murayama acts as a human-powered computer as he reflects these arithmetic processes in his work. His mural paintings are representations of a class 4 cellular automaton (as defined by Stephen Wolfram), in which periodic and chaotic patterns exhibit the kind of complex behaviors found at the root of natural phenomena such as life, and that are considered the foundation of complex systems science.

From drawings and paintings to textile pieces, Murayama creates his computer simulation-themed works by hand. Even though he makes use of external systems to produce his artworks, they remain subject to the influence of various chance events and conditions introduced by the artist’s manual involvement and by the materials and technologies used. The circumstance that Murayama’s process also involves creating the very canvases that shape and define his works is perhaps further evidence of his iterative methodology. On the other hand, it may hint at the fact that Murayama’s practice also express a body rebelling against the systems that engage with it.
Exhibition