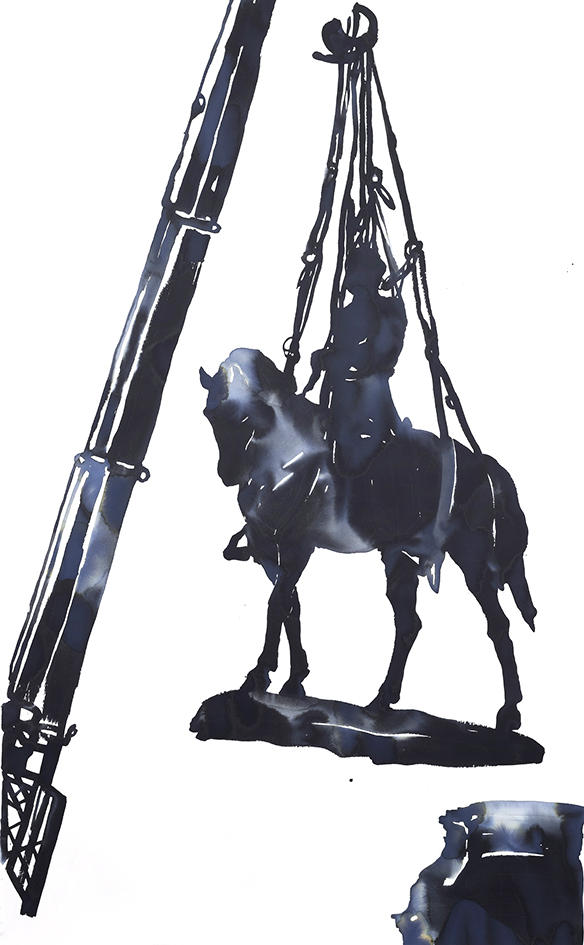 “Breaking History” consists of two separate series of watercolors. The first series is titled “Women in Black”. It is dedicated to a wave of quiet protests that engaged women dressed in black, holding white flowers as if in mourning. These protests against the war in Ukraine took place in different cities of Russia. The activists were mostly women, as the female anti-war movement is very intense. Sometimes the protesters were detained, sometimes not. Initially, this form of protest originated in Israel, during the First Intifada, with female activists from the Left protesting violations by Israeli soldiers. It was taken up by many feminist organizations worldwide to criticize the actions of their governments. In photographs of the recent Russian protests I used for these works, the heads are often cropped out, so the authorities cannot identify the activists. The word “War” is banned in Russia in discussions of the situation, so protesters often hide this word behind asterisks or other slogans, for example, in calling for peace. Even then, protesters are not immune from persecution by the authorities. I sometimes use these alternative slogans in these paintings.

Anti-war protests in Russia are not that visible from the outside, because all mass demonstrations are violently suppressed, and the protesters face criminal charges. Even in these circumstances, dissent comes through in new disguises. I created these works to share my belief that it is possible to raise your voice against injustice under any kind of pressure, even if your protest looks like a wake. I stand in solidarity with everyone who has the courage to protest the war in any possible manner.

The second series is titled “Take Lee Down”. It shows the process of dismantling the monument to Confederate General Robert E. Lee in Richmond, Virginia. Every change in a society’s history is usually accompanied by the destruction of the symbols of the past. Monuments fall down to clear the space for embodiments of the new ideals. That happened in Russia and Eastern Europe thirty years ago, and is happening in today’s North America. I was a witness to another shift of history while living in the US. The gradual disappearance of General Lee’s figure leaves a vast negative space that creates a waiting room for the potential of change.

The figures are always at the center of attention in my work. During armed conflicts, a human figure often becomes a sign of presence without a personality. The human body turns purely functional by taking a side in the conflict and standing or losing its ground. My figures are sometimes defined by their physical existence and sometimes by their absence or gradual disappearance. These two series are examples of the two states of the figure: “Women in Black” demonstrate their protest by the fact of their appearance, and General Lee’s monument is made physically absent.

Behind every piece is a personal narrative, which makes all my works examples of visual storytelling. “Telling stories doesn’t solve anything, doesn’t reassemble broken lives. But perhaps it is a way of understanding the unthinkable. If a story haunts us, we keep telling it to ourselves, replaying in silence while we shower, while we walk alone down streets, or in our moments of insomnia.” (*1) I am always searching for haunting and meaningful voices to enhance them through my work.