40 minutes by car into deep mountain side heading north-east from Tokamachi city center, there is a village called Gannyu of Gejo area. This small village of only 4 families living is known by the pottery museum “Ubusuna House”, one of the most popular facilities of Echigo-Tsumari Art Field. The art work “The Plancenta - Mishaguchi” by Japanese artist Hiroshi Furugori, is little more drive up the mountain from Ubusuna House. 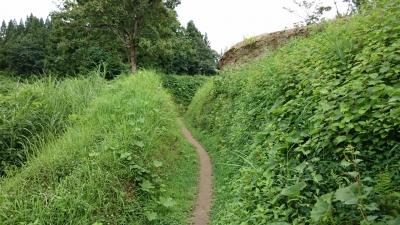 The art work is there quietly hidden behind thick grass covered bank, a patio kind of space made by huge mud wall corridor. The roof once there was collapsed after the Chuetsu Great Earthquake in 2011, and now the planted trees such as beech and maple grow to cover the patio. Wild plants grow elsewhere, but still the trace of human labor is left under the erosion of nature vitality. 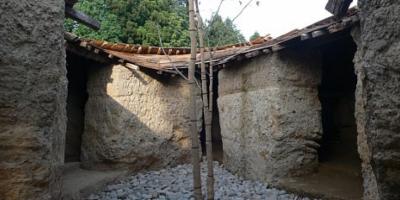 This art work was first presented in 2006, the 3rd edition of Echigo-Tsumari Art Triennale. It was one of the most popular art works of that edition and we could see a long cue lined up outside the art work. Its overwhelming presence of soil and the feeling of sheltered calmness gave people a fresh impression of one type of contemporary art work in this rural site. The traces of land opened up for this installation was rather raw but after these years passed, the work seems to fit into the land as though it stood for 1000 years. This landscape we can see today may let you imagine and think of the long process of how was the contemporary art made commitment to this land of Echigo-Tsumari. 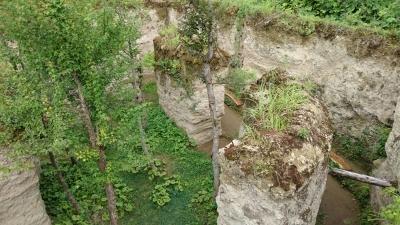 Furugori was born in 1947 in Japan. After graduating from Musashino Art University in Japan, he studied in Brera Academy of Italy and worked there until 1984. His relation with the Echigo-Tsumari Art Triennale was from the first edition in 2000. His work “Bonkei-2” for the 2nd edition in 2003 is now a legendary spoken. He used the resting rice terrace in Gejo area, making a huge soil walls. When the production became very tough and it was not on schedule, the people of Gejyo, from old to young, helped the artist to go through this production days and days even under the bad weather. In the end the impossible was possible and work was completed. This work was broke down in the spring for the rice planting. This marvelous collaboration and exchange between the artist and the local people through labor is one special episode spoken until today which shows us the actual concept of Echigo-Tsumari Art Triennale.