Liu Jianhua was born in 1962 and based in Shangahi. He has been using porcelain as a material to create contemporary art. He participated in many international biennales such as, Sydney, Moscow and Venice. He is one of the leading Chinese artist and belong to the next generation after Cai Guo-Qiang, Huang Yong-Ping and Ai Wei Wei who are born in 1950s. 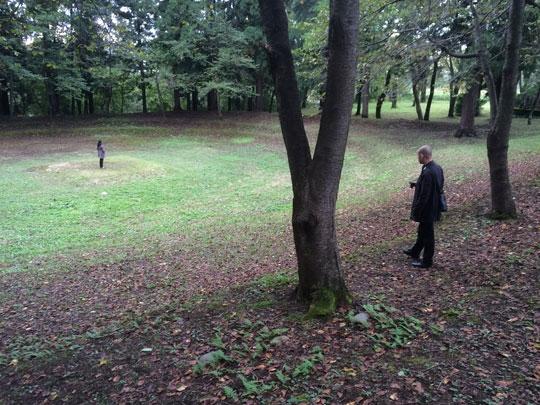 Recently, there are number of art projects using empty houses and school buildings in this triennale. We hear that many visitors also like to see those works which are installed in such historic indoor spaces. But we have a Japanese name of Echigo-Tsumari Art Triennale called “Daichi-no Geijyutsu-sai, meaning “Art Festival of the Land”. We hoped that there would be new interesting work realized in outdoors.From this point of view, the project site for Liu was very important. It is located beside the old shrine, and is a historic site where local Sumo wrestling was held in the old days. It is a quiet and excellent environment surrounded by trees and we were looking for a good artist whom we can expect a very good art project. 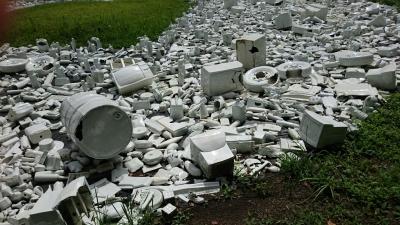 For this time, he is working in outdoors and the size of the project itself give us a large impact, as well as the reflective meanings the work rises up from its surrounding environment. The artist brought thousands of pieces of porcelain made in Jingdezhen which have a shape of common daily objects such as TV, toys, bottles, etc which also looks like a trash from the city.

As shown in his title, “discard, the objects are wastes which lost their functions. The most interesting point about the work is that the artist is using a square mound in the center, which used to be a Sumo wrestling field in the old days. 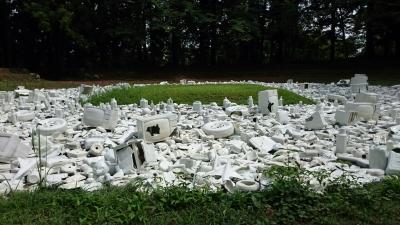 As we see the work, we begin to realize that the porcelain resembles to buildings of the city, such as Tokyo. As the Imperial palace in Tokyo, or Central Park in NY, there are large green preserved area which makes a large contrast to the buildings. Here the green mound gives a clear skyline to the work.

We assume that the Sumo section in the center is covered with glass. This human made and protected square space makes another contrast with the surrounding natural environment. Maybe this historic square space is another discarded area which would be forgotten in the future. The project intentionally covered the square space with man-made nature, to be protected by the ruins from the city. The real nature is quietly surrounding the whole. 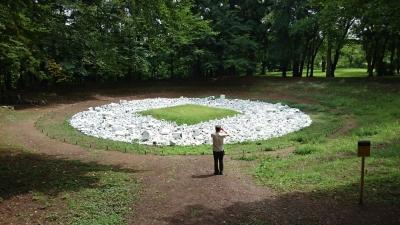 The most impressive experience to visit this work is that the old people from the neighborhood are waiting for visitors to offer us a cold glass of tea. They will talk about the old days and talk about their experience when they helped to create the installation. We can understand that even they would not able to understand the work from the beginning, they must have experience special moment by supporting the project. By comparing the photograph before the installation and the result of the installation, we can imagine how people collaborated not mere to install the piece but to create the environment to install the work.

Environment not be a part of the work, and we do not actually compare photographs when you stand in front of the work. However, for the site specific piece, environment directs how the viewer would see the work. And we can see here ow the artist and the coordinators worked to connect the work, space and people. Seeing those elderlies, I was able to imagine that a sort of miracle had happened here which would never happen without this triennale.