The Vernissage of Alfredo & Isabel Aquilizan was welcomed by "friends in Japan" awaiting for their performance after five-year absence at Art Front Gallery. Isabel started to greeting that "Konban-wa, it is nice to be back. We always consider Japan as another home." 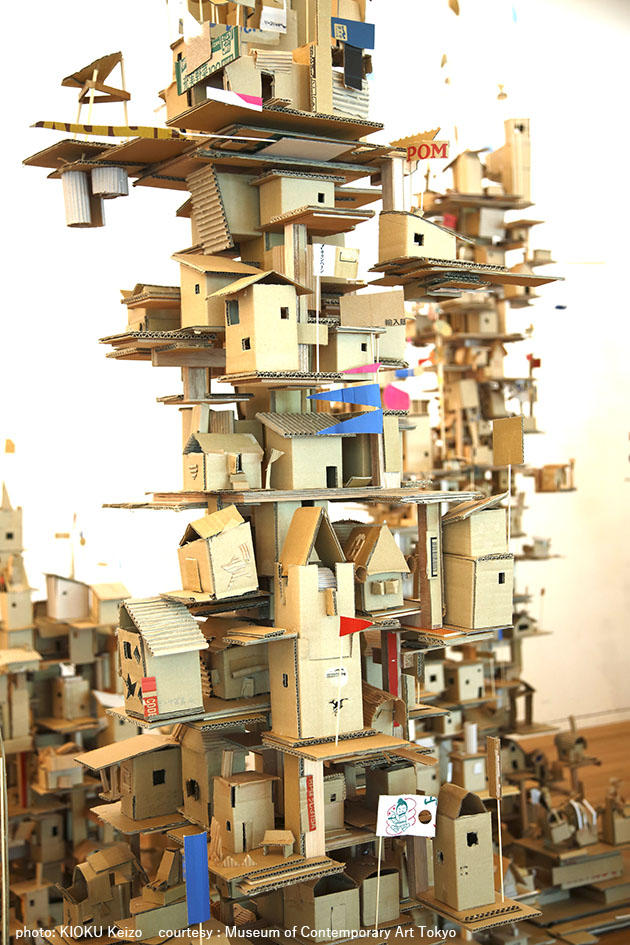 Their artwork often features on movement, travel and being home. Accumulation of parts made of cardboard composing habitat, ship or cityscape are their credit, creating an installation on home-coming as centered issue for the first time in Japan. They exhibited tower composed of cardboard houses in Museum of Contemporary Art Tokyo in 2015 where local children had produced in workshop with the artist their "favorite houses". A part of this installation was brought to Taipei and Philippines returning to Tokyo on this occasion whence comes the exhibition title "Home / Return". (image1）

According to Alfredo,
"Against these visible installation, there is engagement we appreciate very much as engagement of space, of material and of people to work with, which multiplies the meaning of the work.
What you will see in the space is a narrative, a documentation of vision we did in the past. After the project MOT they managed to bring the work to another states which we usually do and brought back here to recreate situation. It reminds everyone the situation in the past, or something consistent with your family."

In fact, Project Another Country is a seminal and multipart ongoing series that spans over a decade. It first began in 2006, when the artists relocated their whole family of seven from Philippines to Australia. Creating complex installations, the artists often work with communities around the world to create site-specific works that explore narratives of displacement, change, memory and community. These monumental installations often reflect the artists own experiences, while conveying points of exchange and communication that extend beyond borders.

Below is some of the selected works in the past. 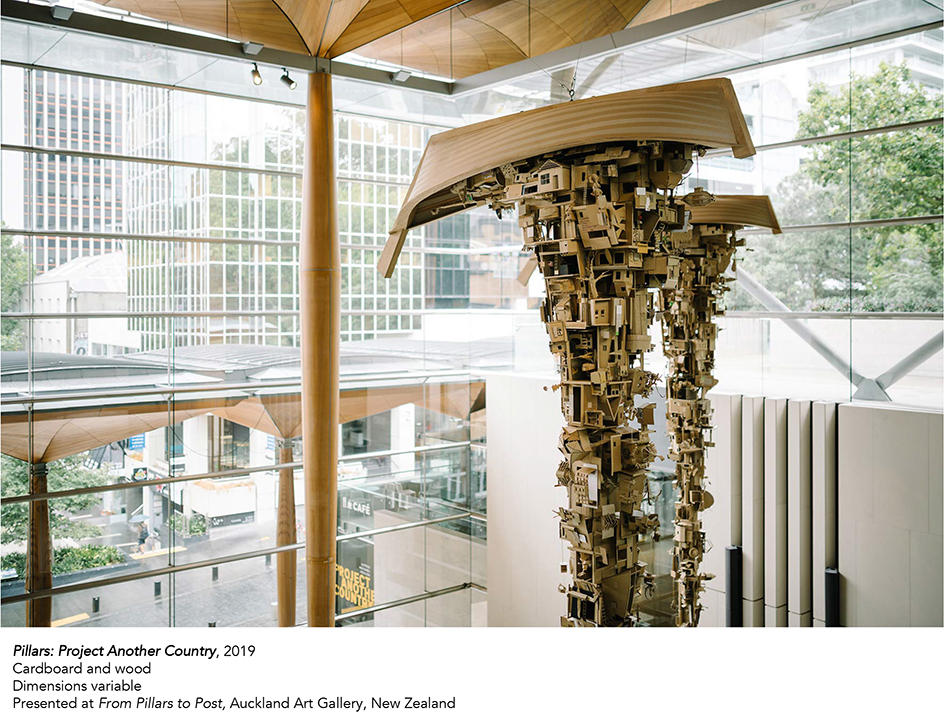 Alfredo & Isabel Aquilizan :
"Our practice is looking around the site given each time to research what we can do there. Such practice can be applied to other place in Auckland, New Zealand where we worked this year. In Auckland, there are many people who are homeless living in the cardboard house because there lots of islander coming from different places exceeding the capacity of the habitation of the city. In the gallery, a room was prepared where people came to create their own habitat with cardboard, which was then developed into a large installation over one-year process. We saw inverted boat and got the idea that the inverted boat is in architecture can be a roof." 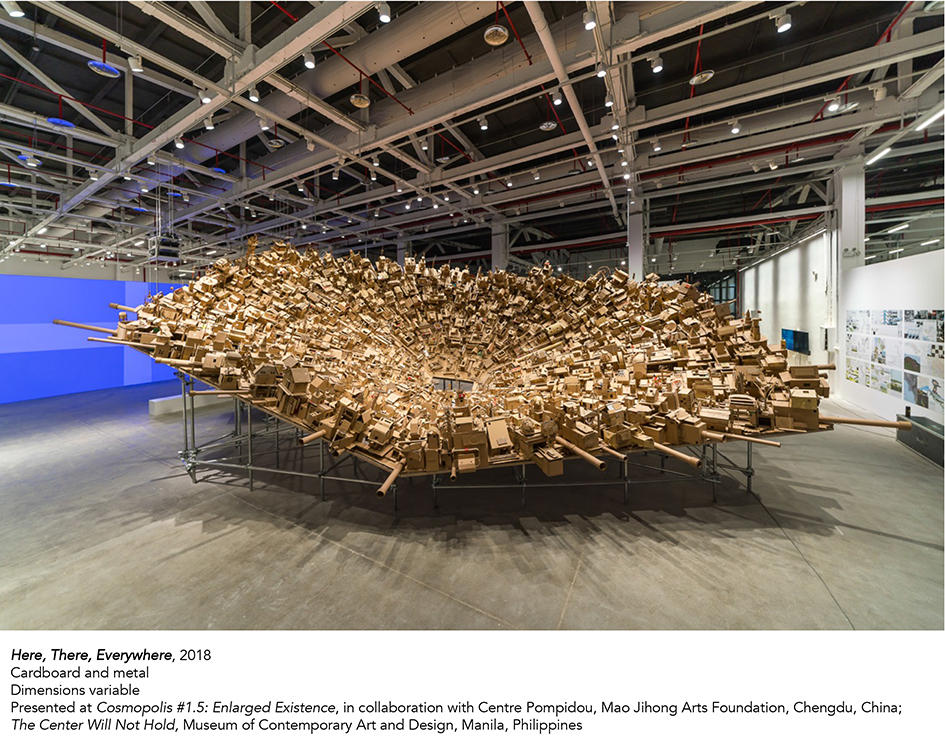 "Last year in Chengdu in China, it was an exhibition organized by Centre Pompidou of Paris under the theme of “cosmopolis”. The use of cardboard as material was very important, since it included the metaphor of journey." 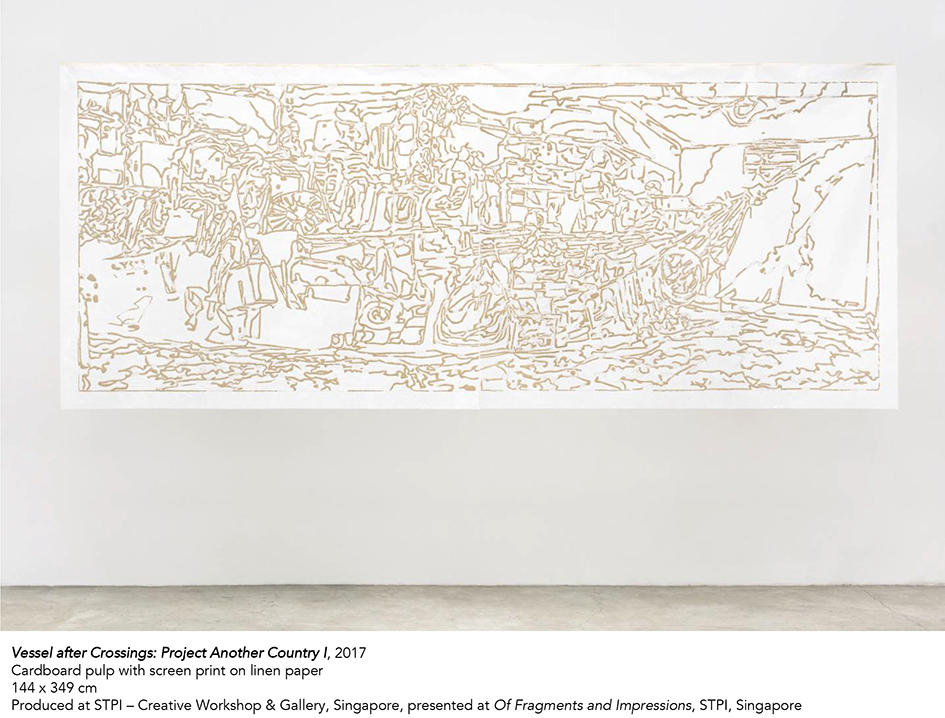 "This is a silk screen on linen paper where pulp, form before becoming paper, was used for screen print instead of normal paint. It was realized at STPI in Singapore, inviting many artists for their sophisticated workshop as residency program offering technicians of high quality. We are especially impressed with Japanese technicians. So we always try to transform the materials into another form, a cardboard into flat surface in this particular case to produce a print out of cardboard." 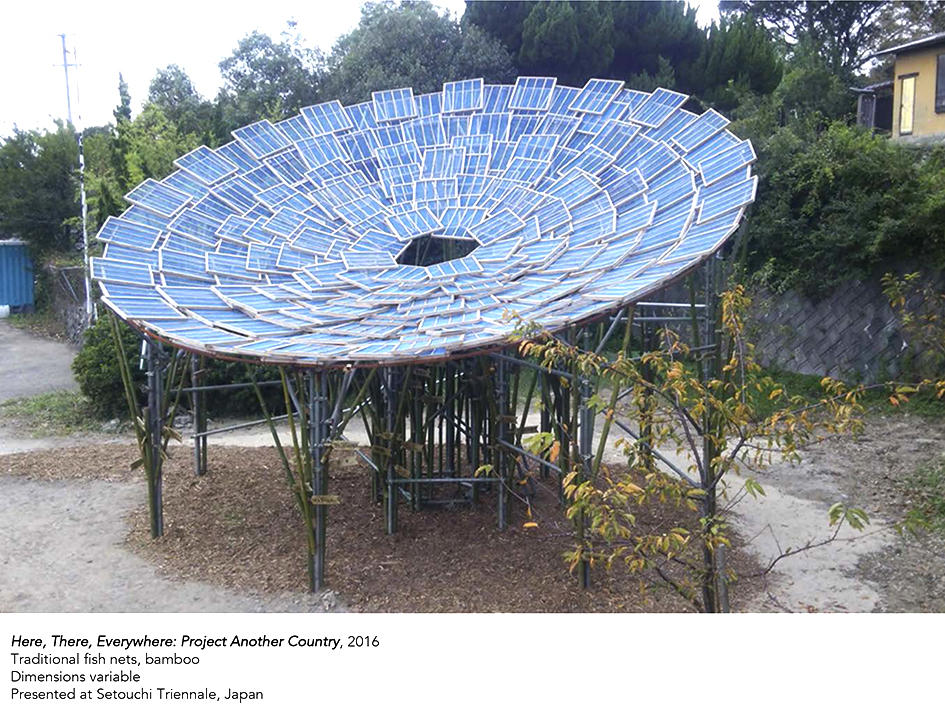 "This is a work which define how we work with a fish net. At the time of Setouchi Triennale 2016, we found many fish net abandoned because of updating innovation. We created a parabola or dry plate. The place of installation is also meaningful, since we choose the site which used to be a school nursery. If you go to the island now, there is no single kid actually living there. This is also the place where all the leaders of the fish boat get together for a meeting, so you will find all the names of the boats on the artwork." 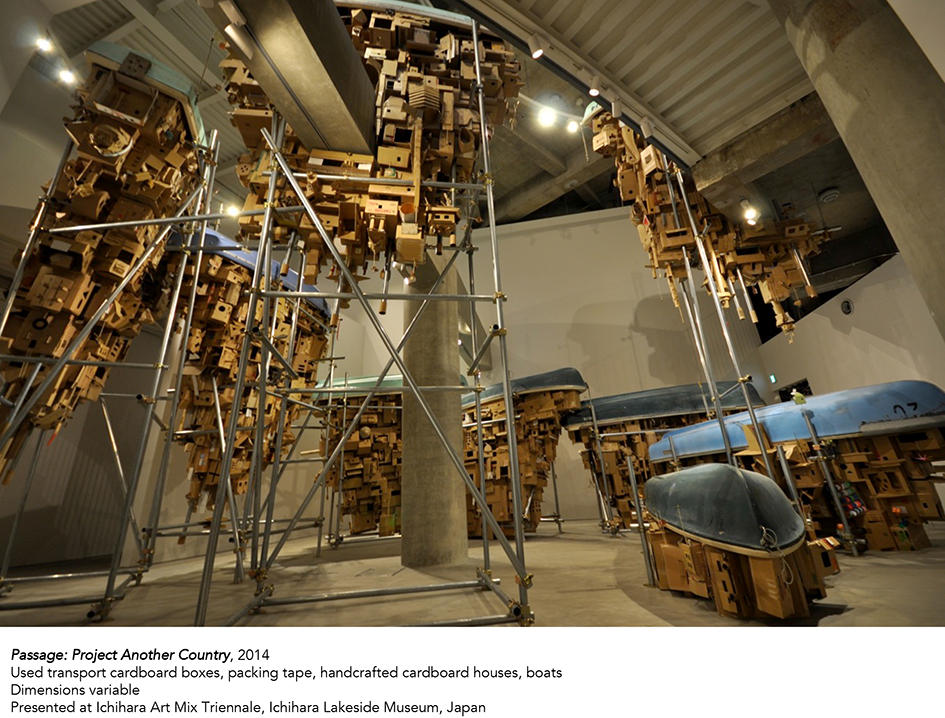 "This is Ichihara Museum installation for Ichihara art mix. We participated in 2014 and 2017, latter being several real boats floating on the lake in broader space outdoors." 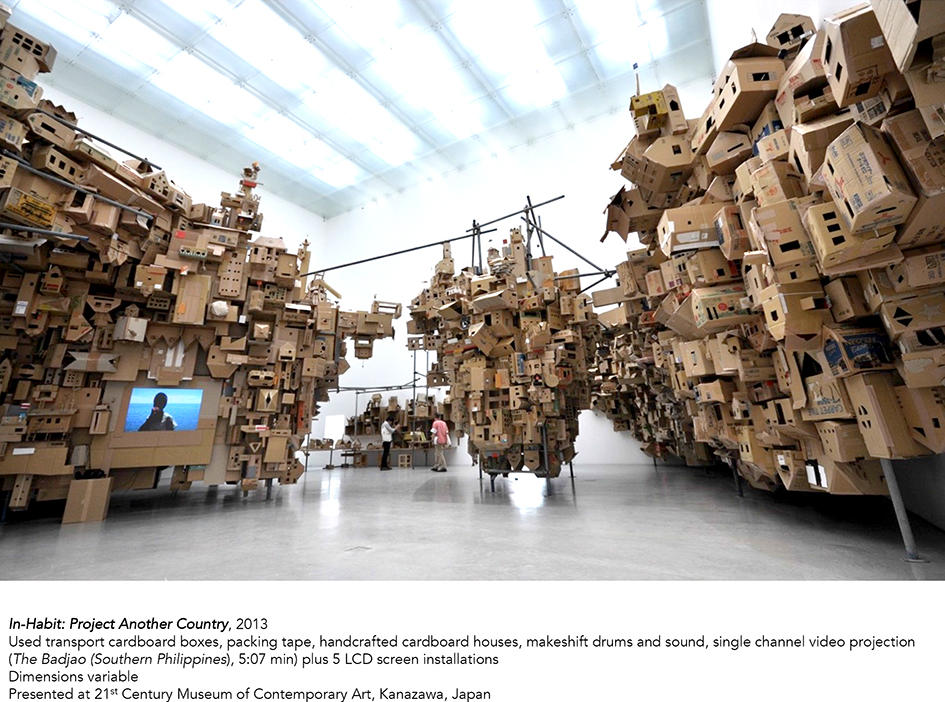 "This is installation of 21century Museum in Kanazawa, where sea people living on boat were featured. We had seen the problems of these people who could not move from one country to another because of the newly created state border. There are children in the street begging but lapping music in all language so this is how the project started. The installation floating in the space refers to sea people. In addition, we had workshop with local students." 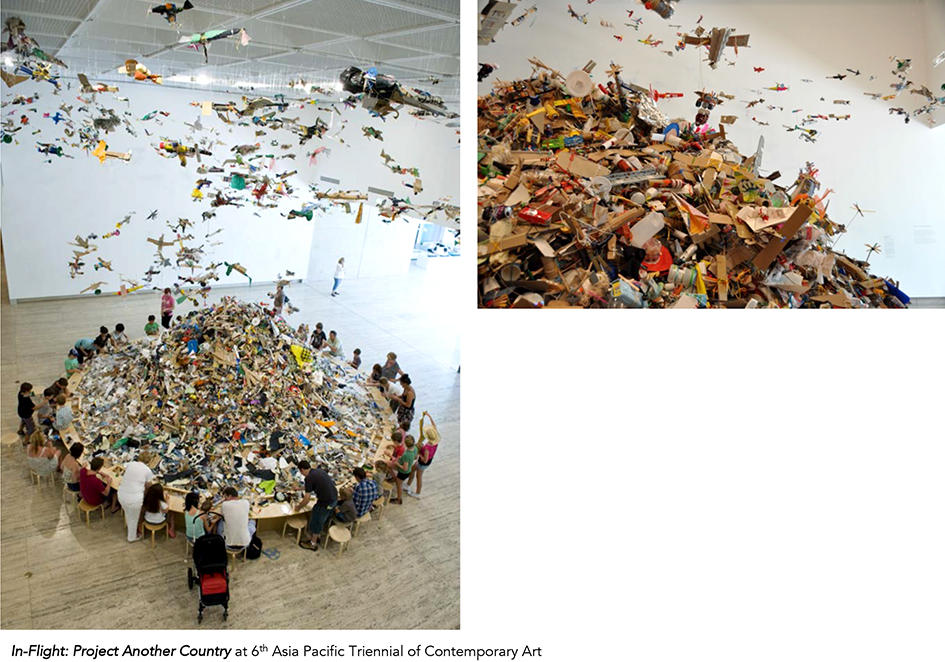 "This is the work for Asia Pacific Triennale in 2010 after moving to Brisbane. We asked local people to bring in their belongings which were to be transformed into assemblage."


Aquilizan’s unique way of creation continues to develop in many variations. Face to different communities, they try to foster site-specific relationship with people to induce the collective memory of the communities. These large-scale installations often reflect the artists’ own experience, while conveying points of exchange and communication that extend beyond borders. The outputs of artwork is a result of engagement behind, of documentation of past vision through process, which differentiates their art from ordinary cardboard art.