Aquilizan investigate the subject of moving, journey, as we saw in the first session, considering their "belongings" as factor how they move forward whether they leave them or take with them will decide their road. 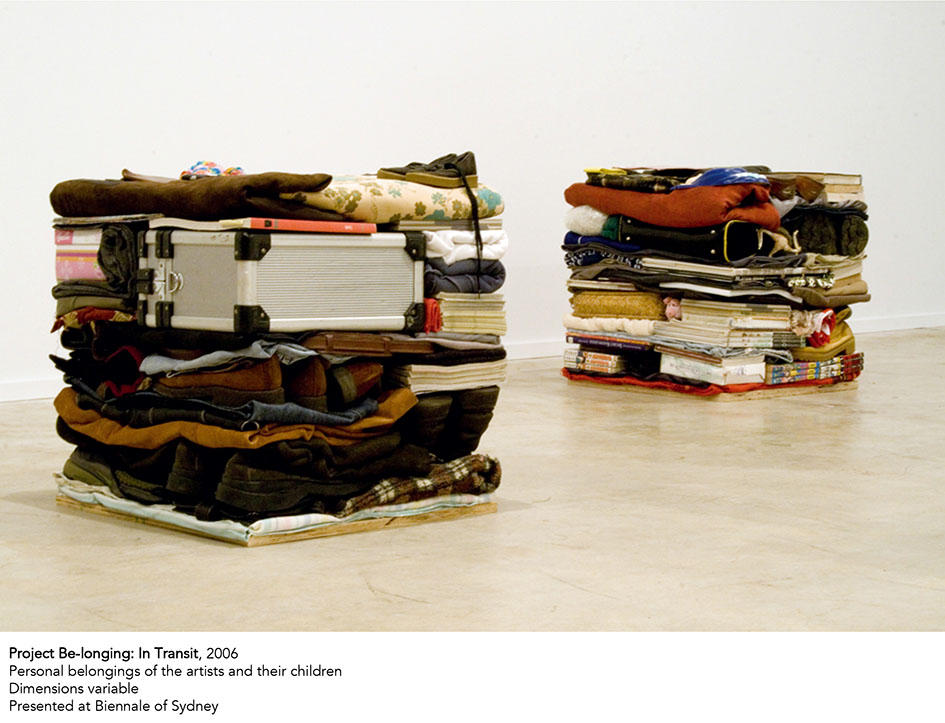 “The cardboard box is very symbolic in that it is a tool for selecting your belongings what to leave behind and what to bring with you. When we decided to move to Australia, I gave one box to each of our children to choose what they can take with them and what they can fit in into the box. When we moved, we had twelve of these boxes. As part of our project for Sydney Biennale in 2006, we had the contents of these twelve boxes on view for the Biennale, while simultaneously what we had left behind in the Philippines was displayed at the Cultural Center of the Philippines.”

The cube formation of these works is based upon the Balikabayan box, or the ‘homereturnee’s box’, an ingenious invention of the Filipino diaspora used to stay in touch with their families and their homeland. The Balikabayan box is a bric-a-brac collection of everyday consumer goods including clothes, kitchenware, canned food to be sent back to the Philippines by emigrants, and is small enough to be hand carried on airplanes or sent by post. Originally featured in the 2006 Biennale of Sydney, Project Belonging is a series of works that consist of personal belongings such as clothing, books and toys of the Aquilizan family arranged in cube or box formations. 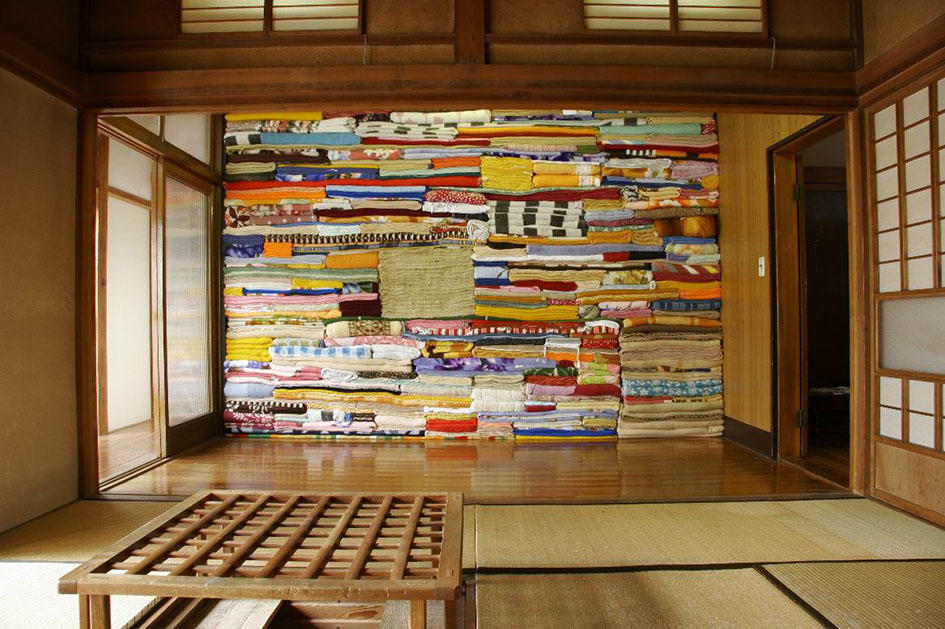 Aquilizan were invited the same year of 2006 to Echigo-Tsumari Art triennale,
where they researched the narratives of the locals. The artists went around the village of Doichi visiting the locals to talk with them. People confessed their feeling about the snow, farm work, daily lives, social problems of the community, and wishes for their children living in the cities. The artists recall that “We listened to their dreams, and were overwhelmed. We could catch a glimpse of their beings, going beyond the meanings of the memories being recounted.” 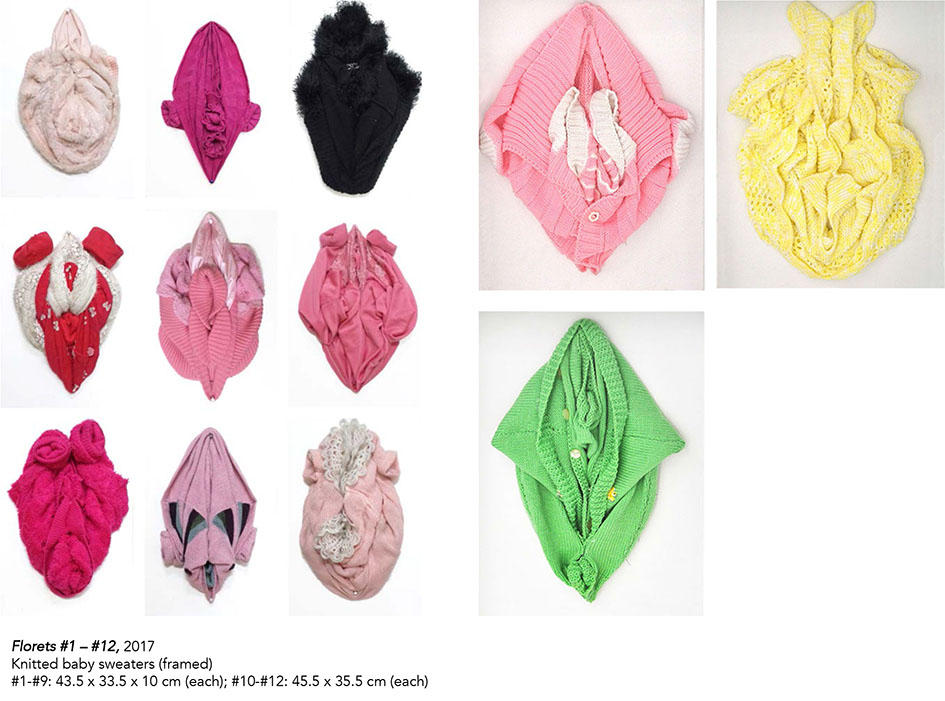 Surely the longing feeling of the locals for their family living in distance can be shared with the artist across the cultural border. In fact, Alfredo once lived oversea for his study and created the series of Florets. Florets is a series of works that feature imagery of knitted baby sweaters folded into the shape of female genitalia. These sweetly delicate works were first created at a time when Alfredo lived overseas and missed his wife and five children, especially his newborn baby daughter. Drawing on this melancholic experience, he conjured the possibilities of travel and reunion by buying a second-hand baby sweater every day for thirty days, shaping them into a female genital, installing them in his studio. 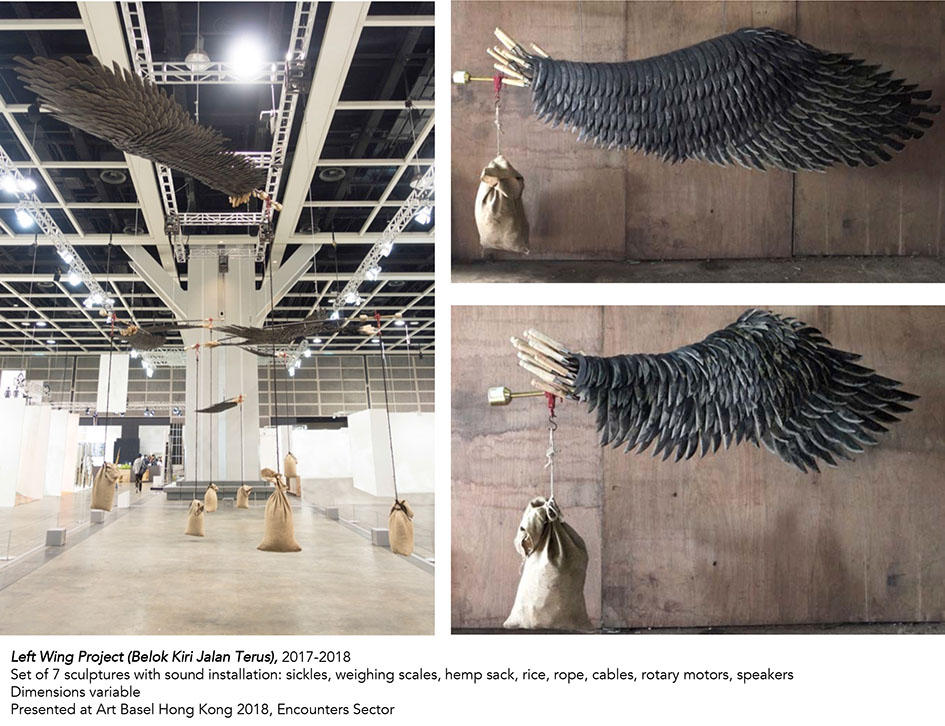 If Aquilizan embraces their own family, they also keep broad perspective on people of the society they live in.

In Left Wing Project (Belok Kiri Jalan Terus), the artists examine the complex sociopolitical struggles that contemporary agrarian societies face in Asia. Made from numerous hand-forged sickles sourced from Jogjakarta, Indonesia, and fashioned into the shape of a left angel wing, these immense sculptures that draws references to the history of Jogjakarta and traces their increasingly disenfranchised blacksmith communities due to economic globalism. 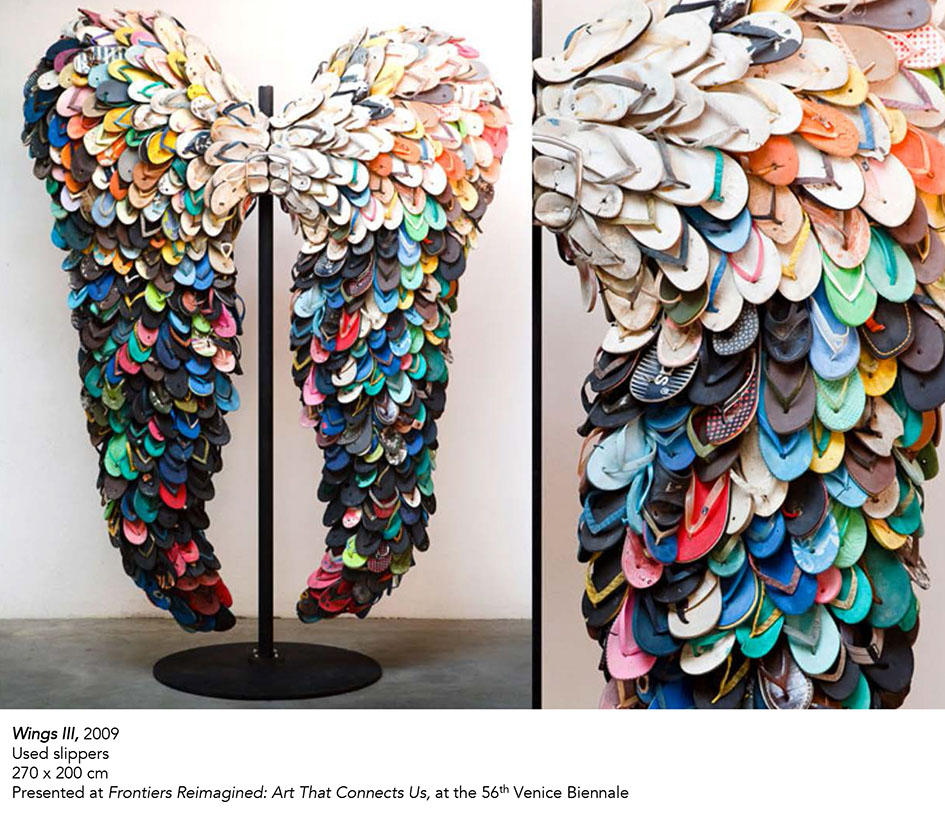 In their 2009 sculpture Wings, they gathered hundreds of rubber flip-flops from a Singaporean correctional facility to create three human-scale pairs of angel’s wings, serving as a metaphor for an incarcerated community from which no amount of good work or divine intervention can release the inhabitants. The piece is luminous in its simplicity, acknowledging the prisoners as the most dispossessed of all communities, while the freedom that the wings imply lends the work a bitter irony. 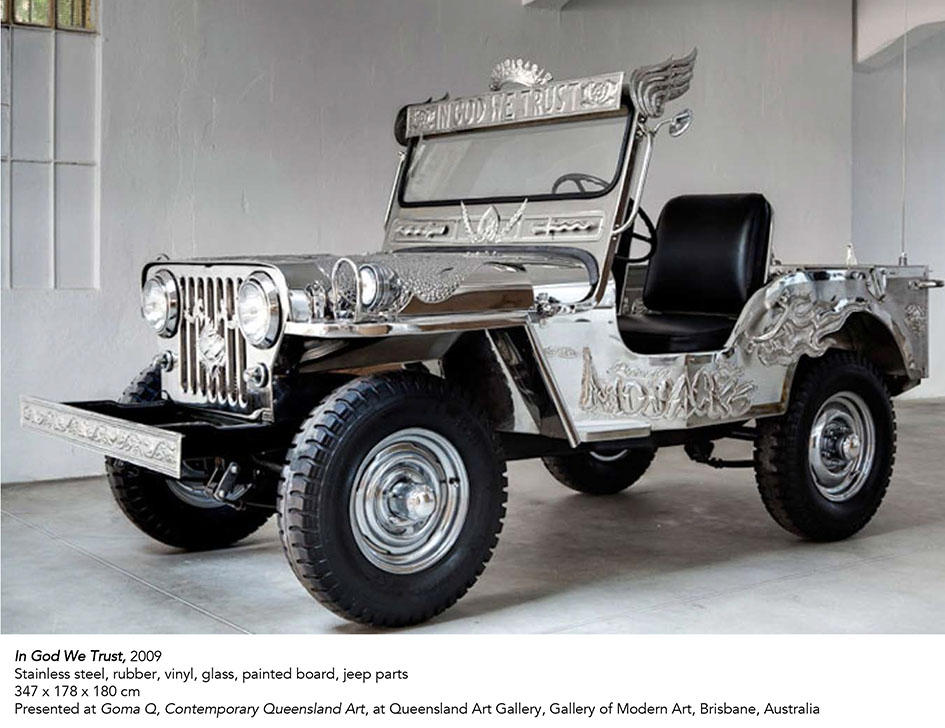 The first occasion for Aquilizan to attract the art people was Venice Biennale in 2003 where they exhibited a "Jeepney". It reflected the Philippine culture with multiple roots, just as their identities had multiple roots.
In their Jeepney series of the works, the artists have fused numerous Filipino traditions - fine metalwork, prison tattoos and the "Jeepney", the popular custom of modifying old military jeeps and other vans for public transport. The design of the jeepney is often vibrant and energetic in order to attract the attention of customers. Yet, the work also highlights American influences in the Philippines since World War Two, as well as the Filipino tendency to embrace external influences and reinvent them in their own images.


Images created through "collecting and composing" have been handed down from generation to generation.
This time at Art Front Gallery, Miguel Aquilizan is exhibiting his solo show "Lost and Found" similtanously with his parents' show. Taking with him the system of assemblage and collage from them, Miguel stands on his own arranging the details. We hope that you will take time to visit the venue to experience the charm of both styles comparing them. 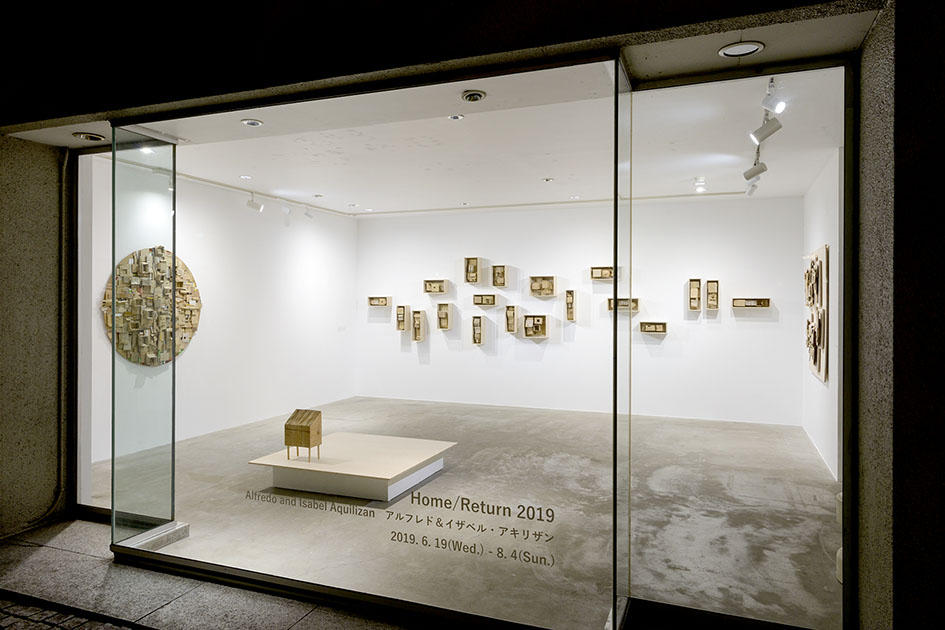 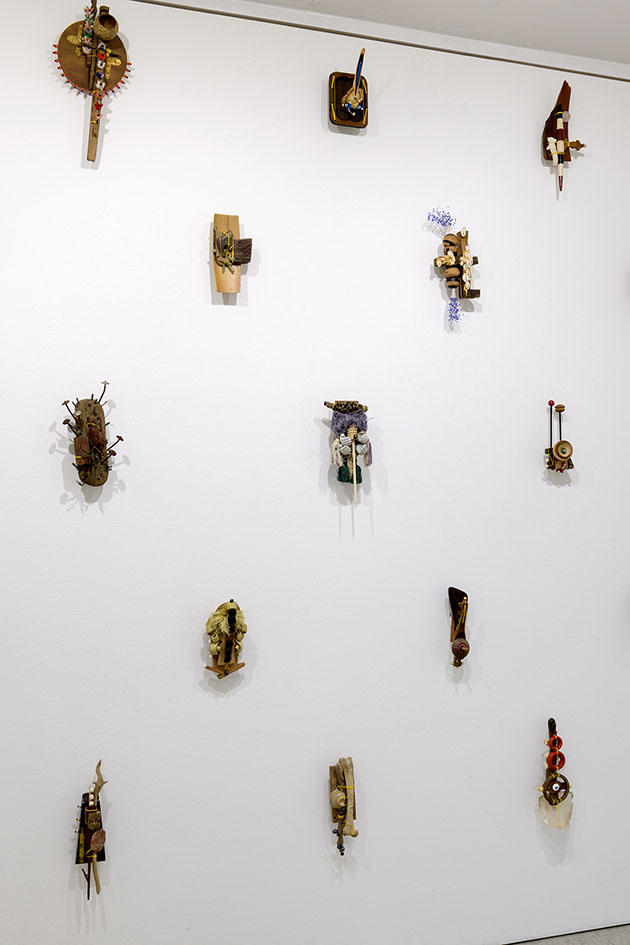