Nara city has launched "Culture City of East Asia 2016" this April by having the ancient ship made from the project by Cai Guo-Qiang. For its core event period, all the art installation will be open to public from 3rd September. One of the installation site, Gango-ji has been accompanied by the world known Korean artist, Kimsooja. 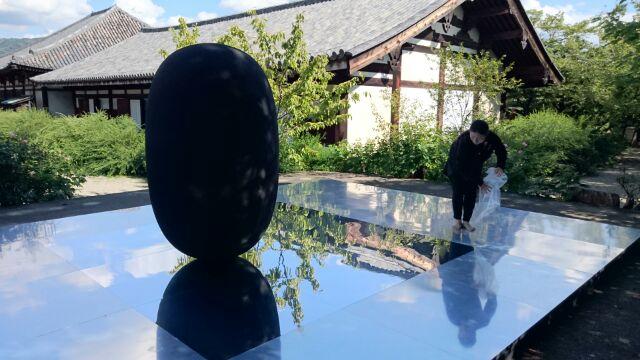 Gangoji Temple is one of temple built in Japan toward the end of 6th century. It is known for its roof tiles from the Asuka Period which had been manufactured the craftsman issued from Kudara Dynasty in Korea. This fact indicates the cultural exchange between Japan and Korean at that time.

On the occasion of Art Celebration in Nara, a Korean artist Kimsooja exhibits her work in this historical site. The artist has been on view in leading art scene such as Pompidou Metz or Guggenheim Bilbao with her solo show last year. She represented her cultural identity or roots through the installation and video using fabrics and other objects from daily life. Kimsooja at Nara for the first time tried to visualize the time which lasted in the specific site distinguishing what is visible now from what has vanished through the historical events. Her egg-like work made from black cast aluminum is reflected against the mirror on the pedestal Ishibutai, which induces the visitors’ introspection: the cyclic time, an Eastern concept, will be associated with the birth and rebirth of the lives.


Kimsooja exhibits another work using video in Shoushibo, inside the Gangoji temple. The stay or residency of the artist herself bring about something reminiscent of the ancient travelers between the city of Nara and of the foreign countries such as Korea and China, where many Buddhist monks or craftsman were travelling. Their experience searching for different culture seems to have prepared the base for the contemporary version of exchange. The event starts on September 3 through October 23 which should attract a broad audience.