Art Front Gallery will host a solo exhibition "monookuri" by Nozomi Tanaka.
After we had disaster and nuclear issue, the artist Nozomi Tanaka moved and expanded to her issue from the area and their tradition in Tohoku (local area that locate in north part of Japan) to its relation to the world.
This will be the first major solo show since she got a grand prize at VOCA (the esteemed annual group show for painter) 2014.

For more information on the artists, please click here
At a young age, we are handed a piece of paper and brush and told to draw anything we liked. Expressing oneself within the limits of a square is considered drawing within the field of art education. With this definition those taking figurative representation as their starting point hit a wall when they try to choose themes that secure contemporaneity.
Along with artistic norms that continue from the past, in our current age the media are inundated with countless images making it crucial to find ways for expressions of individual particularity and temporal transcendence to cohabit the same piece of art. It is quite natural to find the tendency to depict themes with urban images shared by a majority of people, and being unlike installation art that does not presuppose the experiences of the viewers, it seems that the connection between a particular “place” and art becomes increasingly dilute.

Tanaka Nozomi expends faithful care on the thorough study of her subject’s history to provide it with a particular “place.” Fieldwork in the area she chooses to make her object is given priority, and delving into the social problems found at present in Tohoku, her birthplace, she researches and is passionate enough to actually live in the area so it can be transferred into the universe of her pictorial art. Tanaka stands out because in the present world of flat surface representation where a systematic focus on the “urban” and “individuality” continues to be conspicuous, she renders the “local” as subject making it her precondition and starting point by building a relationship with a particular “place.”
The ordeal awaiting this artist is for her to neither fall into a simplistic regionalism or nationalism, nor novel presentations of the “ethnic” or “local” that are quickly consumed. Rather she will need to provide for her diverse audience work that transcends the “place” and holds their attention, and simultaneously find the resources to assert a contemporaneity with them in her depictions.

Many of Tanaka’s paintings are akin to the Rakuchu rakugai (scenes in and around the Capital) screen-painting genre, where initially the point of view starts with a detail and expands until the eye can grasp the entire meaning of the work. As on the Internet where we are bombarded with momentary images, currently, the success (or failure) of a piece of art is decided by the immediate impact an image makes. In this sense Tanaka’s work may go against present trends. But once directed towards the details, Tanaka’s works unravel like scroll paintings, and regardless of whether or not one is able to understand the representations or their meanings, the viewer is led out from the details to the totality of the subject while receiving pleasure through surprises and discoveries on the way. From tradition to contemporaneity, from the local to the world?in the background of these paintings before our eyes, clusters of meaning reside in the form of fables for us to interpret with our contemporary perspectives.

I am filled with great expectations for the adventures in pictorial art Tanaka has just now embarked on.
Toshio Kondo, Art Front Gallery 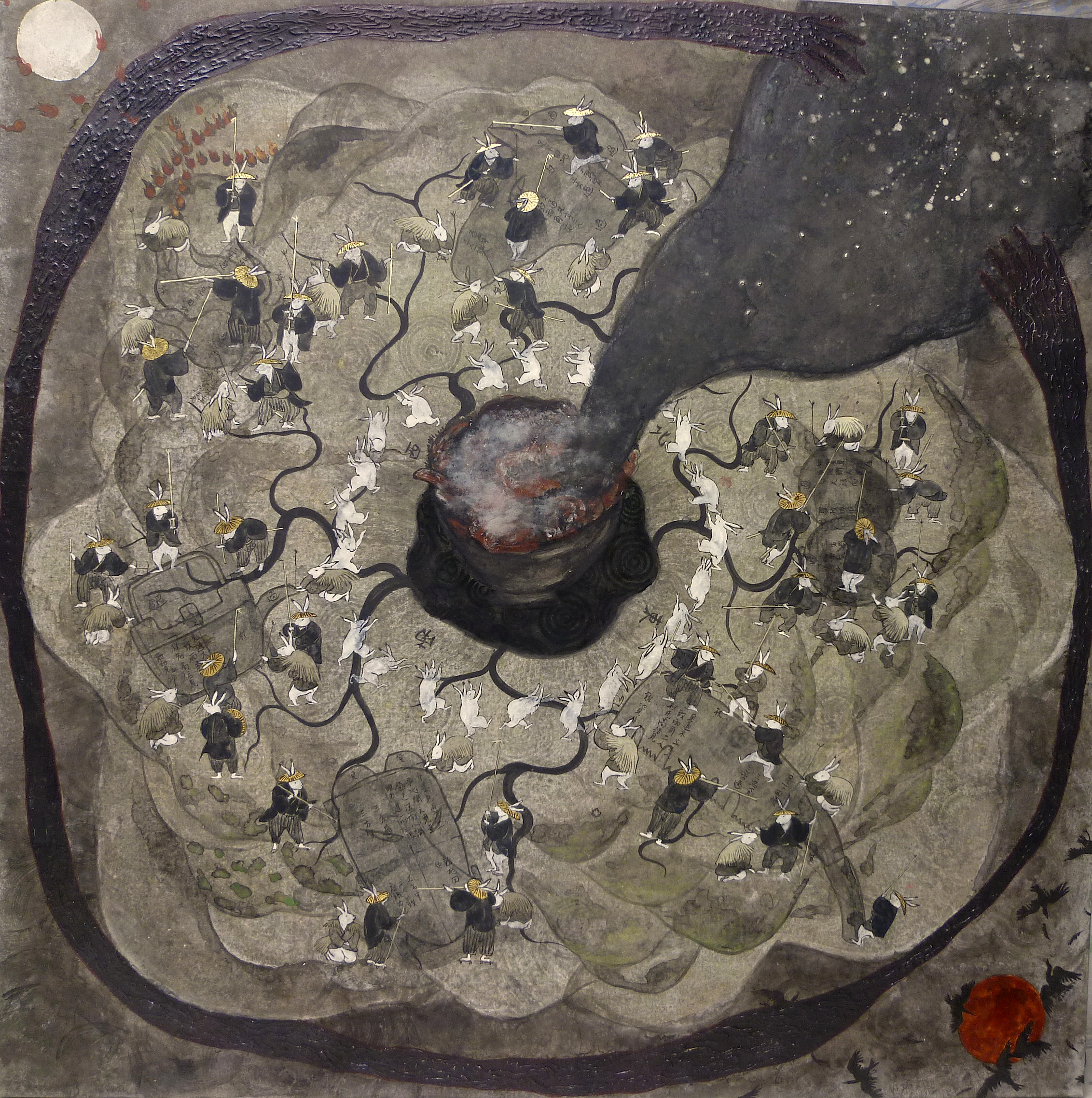 Tanaka has experienced artist-in-residence in various places in Tohoku area. There she often hears of folk legends from aged inhabitants, studies area topography and transforms these inspiring sources into her own pictorial motif.
Rabbits, for example, are depicted in all ages and countries with different connotations; in Tanaka’s work, they have symbolic meaning of “moon”, “wax and wane”, “seasonal change” or “life and death”.

This year Tanaka stayed in Kamikoani village of Akita Prefecture in artist-in-residence, whence comes the title Ani of the painting. It is based on the mountain life and on the traditional performance. As many local rituals refer to pray for better weather for crops, this work also focuses on “meals” related to the climate or weather. In addition, you will find some rabbits measuring the dimension of their land. The scene is associated with Kenchi or Property Inspection carried all over the country in sixteenth century. Heavy taxes thus imposed regardless of actual situation of each area could have been one of the reasons for the famous Famine of Tempo (1833-1837). There must be other symbolic scenes in the paintings of Tanaka, which can be detected and appreciated when seen in detail.

We would like to introduce comments on her recent works as an invitation to Tanaka’s world.