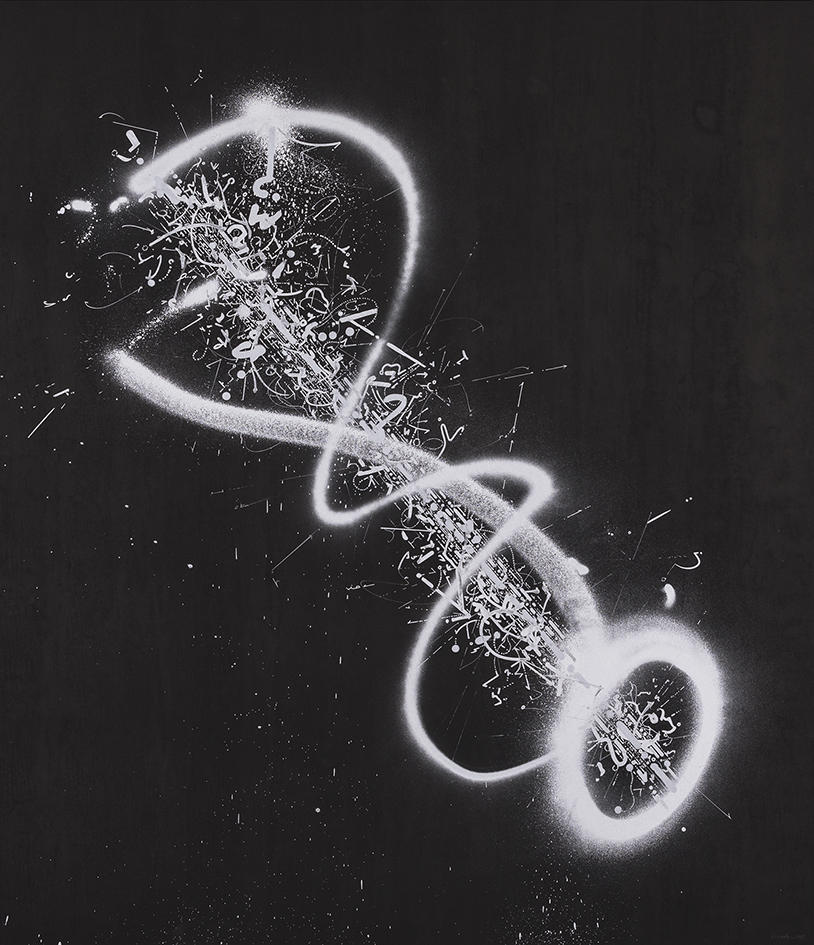 
‘Excavation’ of Lines: At the Crossroads Between Time and Space.
Tomoko Yabumae
Curator, The Museum of Contemporary Art Tokyo

Hiraku Suzuki has deepened his methods and expanded his processes, and assembled a wide range of expressions all captured under the word ‘drawing’. Drawing, he says, signifies ‘not only lines on a two-dimensional plane, but ways of generating new lines from time and space; again, drawing can be the discovery of potential lines within linear phenomena of the whole universe.’ (1) Suzuki says what he does is between ‘drawing’ and ‘writing’. (2) His lines are not created out of nothing, but are parts of pre-existing possibilities. His actions therefore come close to writing, but prefigure meaning. Suzuki equates this with ‘excavation’, that is, with a methodology neither arbitrary, nor chance, both within and outside the artist’s hands. It is a metaphor, but how does his art actually occur?

We could say, Suzuki’s lines are, on the one hand, results of his bodily movements, but on the other, created somewhere detached from him. That is, his lines are incorporated, with their own internal senses of time and history. Compare this with writing: Chinese characters, used in Japanese under the name of kanji, are said to be the world’s only ideogrammatic system. They evolved from pictograms and through numerous stages of usage became fixed as line symbols. Kanji have acquired general acceptance by repeated processes of abstraction and reordering. Take another example. Suzuki’s lines can refer to a larger, absent whole. Recall how Yoko Ono said of one of her works, ‘this line is a part of a very large circle.’ (3) Her statement is often cited by Suzuki. He spent a great deal of time on the lines included in his drawing collection, Genga. The title is a portmanteau neologism from gengo (language) and ginga (galaxy). The book contains what look like embryonic letters, still undergoing evolution. Their profusion is a premonition of some greater whole, yet to come.

A moment of ‘excavation’ contains a temporal ambivalence. Present and past come together in friction. But at this point, potentiality is made visible, resolving itself into a trace. Suzuki’s early work articulated these conflicting issues in live drawing. He used OHP sheets to turn lines into momentary blinks of light. Later he used silver ink or reflective plates on black bases, inverting expectations of positive and negative. It seemed he came to conclude that his lines acquired temporal eternity, and thus could continue to exist in space. This shift was like the move from Impressionism to Symbolism, that is, from a striving to fix one moment of light on a picture plane, to conceiving all light, from all the moments of time, on that plane.

Suzuki’s methodology is indeed ‘excavation’, in the sense that he seeks to express what is beyond time, but still occupying given space. His method has now gone on to a higher level. It is tempting to say his ‘excavations’ are conducted to dig out the crossroads between time and space. It may follow logically that Suzuki’s work now emphasises the concept of space. His most recent work shows what appear as galactic systems, laid out on huge surfaces. He defines his act of drawing as creating a tube between things, with the movement through it, bringing the notion of ‘transport’ to the fore. (4) Accumulated lines discover orders through their mutual relationships, and all on their own determine their shapes and expanses of space.

Starlight was emitted mind-bogglingly long ago. When it reaches earth, the star has moved far into the future. What Suzuki presents is not the representation of space or constellations, but galactic order, a structure where past, present and future compress. This is a space where you recognize the gap between ‘I’ and ‘a world other than I’. When we look up at a starry sky, we are dazzled and lose the sense of where we are. When I look at Suzuki’s work, I now know where that dazzlement comes from.