Art Front Gallery is pleased to announce solo exhibition of Nozomi Tanaka.
Nozomi Tanaka is currently living in the mountain side, studying the history of picking as well as its technic. She tries to create a micro-economy by elaborating her own art based on the materials and experiences through picking vegetables. If her artistic viewpoint has been both journalistic referring directly the research on the spot and narrative hearing the episodes by the local people (inspired with the result of the folklore studies), these unique characters support the reality of her powerful style with stories. She works on paintings generated from her own life of picking wild plants in Shonai area, Yamagata Prefecture, together with some three-dimensional works newly developed in the concept of “gift from the mountains” called Yamazuto.

Besides these work of paintings and lantern works, there are salable preserved food (such as soup extracted from Japanese mushrooms) , in a package with the original drawings of Tanaka.

artist Nozomi Tanaka, picking up wild plants in the field 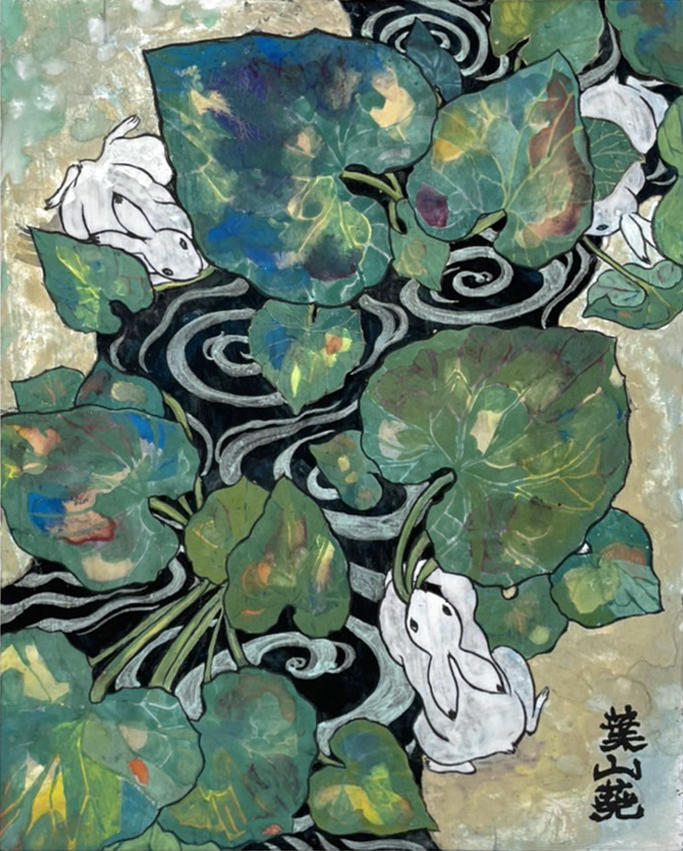 On a bright January day in one of the snowiest winters in many years, I visited Nozomi Tanaka in her new home at the foot of Mt. Gassan. It was the first time we met in a while, and now she radiated the atmosphere of someone entirely tuned to life in the mountains.
Nozomi’s practice as an artist has involved fieldwork and archival research to explore the lives of local people and the universal cycle of nature in artworks that teem with symbolism. But the scope of her works does not limit itself to drawing out the meaning of a specific place but attempts to capture the multifarious layers that make up a place from a critical perspective that adds context and interrelations.
Nozomi has now started living in an area she once researched. She had not yet started painting the region. When we met, she told me about the profound emotions she felt when she ventured into Mt. Gessan to gather wild plants and mushrooms, about the seasons and their different manifestation depending on elevation and terrain, that she was now in the process of reshaping her sensibilities and her body, and about her growing (and myopic to begin with) interest in her immediate surroundings and her focus on the individual rather than the collective. All of this is indicative of her turn towards manifesting the reality of a space—which refuses being recorded in objective maps—as something palpable for herself through the acts of hiking or picking wild plants, and towards internalizing it as a space that incorporates the experiences of those who inhabit it. I think that Nozomi’s attitude of probing the possibility of expression from within the dimension of individual lived experience (which is where the subconscious collective memory resides), as opposed to an abstracted generalization of a ‘collective,’ shows a methodical approach interested in illuminating a place’s essence from within oneself rather than attempting to subjectify events and circumstances from the outside. In that sense, I believe that it is the act of ‘gathering’—the theme of this series of works—where Nozomi feels closest to reality.
Words like collective, participation or cooperation have recently been used by plenty of art projects (regional art) that expect to facilitate new relations. Such community-oriented artworks, which incorporate the experiences of a number of people each with their own skills, perspectives and conceptions, sit opposite Nozomi Tanaka’s approach of unravelling the reality of a place as a complicated web in which the present is multidimensionally intertwined with time and locality. Her attempts to determine the limits of what can still exist as art are also radical acts that see through the restrictions of the art world.
I expect that Nozomi Tanaka’s exhibition “Gift from Mountain,” consisting of paintings, three-dimensional works and preserved foods created by the artist, will be a space that is uniquely itself, freed from any connections to specific places.