I first took Nakaoka’s work to be pure, big-hearted abstract landscapes. Their resin paint with base tones of white Cashew were on show at Project N, Opera City. That was in 2005, but I saw them again at VOCA, in 2007. Nakaoka since expanded her work to what we may call psychological landscapes. These depict well-known locations, such as the Katsura Imperial Villa, Hiroshima Atomic Bomb Dome, Ginkaku-ji (Silver Pavilion) or Ryōan-ji temple, the Kenrokuen Garden, or Osaka Castle. She also incorporates banal features, like a quarry, an abandoned house, a buoy lying on the shore, guardrails, or retaining walls. These shapes mesmerise Nakaoka, and she cannot take her eyes off them. Her work does not seek to capture the historical or intellectual dimensions of the famous sites, but rather to replace these appealing buildings and landscapes with more abstracted forms.

Nakaoka takes photographs of prospective subjects, as she feels the need, in the same way that many contemporary painters do. The landscapes in her viewfinder are turned into compositions by her angle of vision. Elements of future paintings are captured in prior images, which Nakaoka converts, but transplanting only the minimalistic soul of the image, that is, its most essential form. It is as if she was writing a haiku. She first deals with forms, then fills her pictures with colour, generating balance and harmony. She has a clear desire to keep her surfaces flat, avoiding depth and three dimensionality.

I had the opportunity to see unfinished pieces at her Osaka atelier. The room has a charming patio which Nakaoka used as the main motif of her fine work of 2019, Interior-Scape. Her notion, she said, was to ‘overlook landscape through a window,’ in that case from an early Western-style building in Kobe. World art has many paintings of open windows, and there are famous pieces by Casper David Friedrich and Henri Matisse. But Nakaoka’s emphasis is the landscape through the closed window. There is a world in front and a world behind, with a plain white frame between. They merge harmoniously, filling the picture with happiness. The geometrical, inorganic window, and curvilinear, organic vegetation interpenetrate in a colour balance. Her intention is not to faithfully reproduce a subject, and yet, their aura, I believe, is well conveyed.

For the present exhibition, she intends to hang work from specially installed pillars and bars. I look forward to seeing these windows within windows, as pictures within pictures in the gallery space. Nakaoka had convinced me. A unifying feature of her work is to make site visits, taking relevant photographs, and to base her work on those experiences. Yet she does not combine images belonging to different times and places, nor permit herself imaginative ‘falsehood’. Truthfulness to site is part of her expression. This is probably why viewers sense a tension in her gentle picture planes, with their blank spaces so typical of Japanese aesthetics. 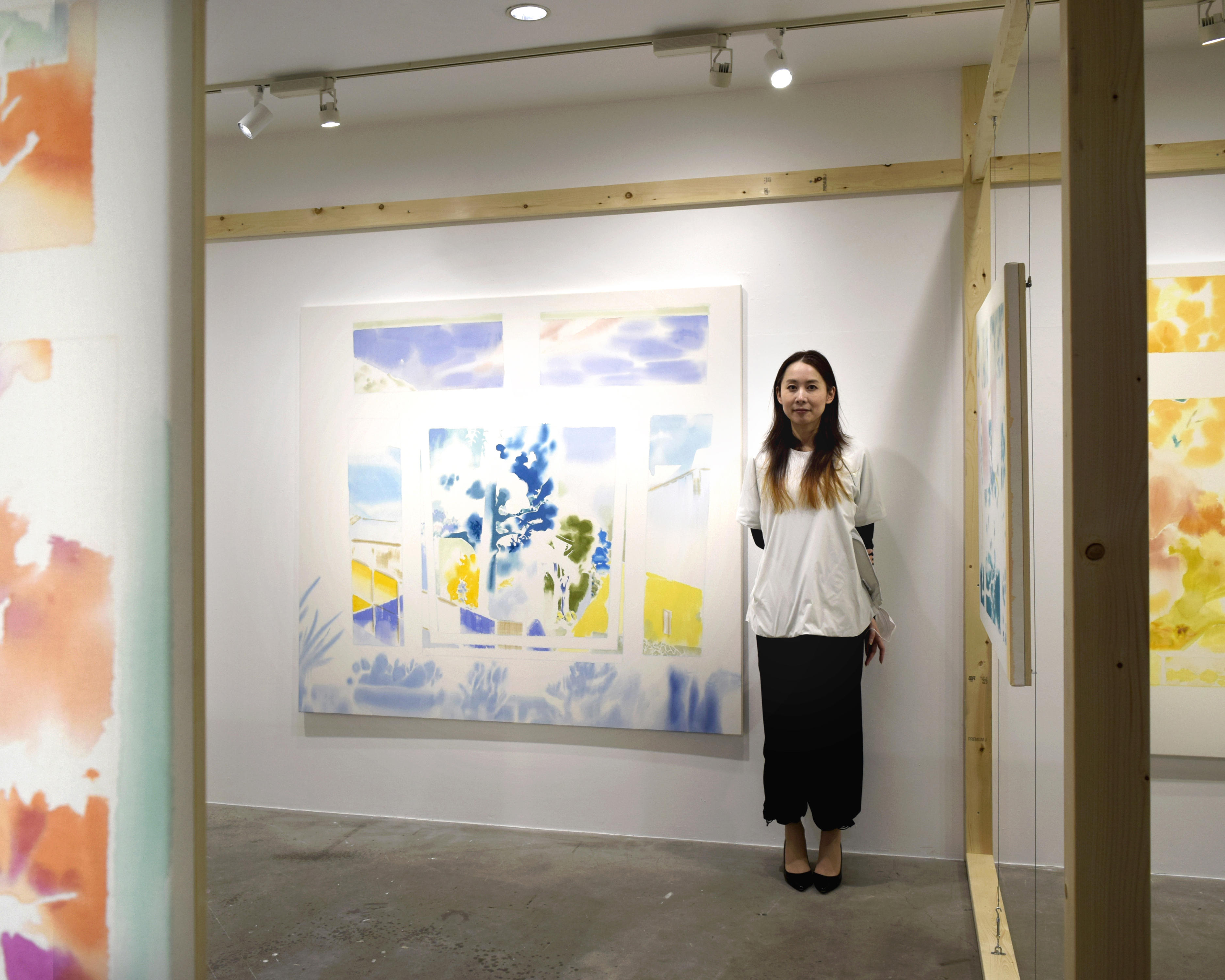 Interview with the artist


Current exhibit “Masumi Nakaoka: Fenestras” is characterized by its unique installation of the paintings. It was initiated by the artist in a different way than usual, while keeping the basic rule of hanging paintings to perfectionate both the artwork and the space where the artworks are installed. Here the artist demonstrates the background and her own innovation in terms of the installation.

G: As assumed from the title of the exhibit, “fenestras” or windows are scattered in the gallery, where visitors can follow the work, travelling with his sight from one to another. How did you come up with this itinerary？
N: I did not want to realize an installation with mere hanging my works on the wall. Nevertheless, I wished an exhibit for appreciating the paintings. If I had hanged with wire my ordinary styled works, I should have suffered from the gap between the motifs and the paintings, so I decided to depict windows and their frames after long reflection. With window frames, viewer could feel an imaginary wall, which enables him to appreciate the installation conceiving the paintings hanged vertically as if on the wall. I tried to detect the best combination of the exhibit and motifs.

G: Surely, we experience the mixture of the color on our retinas walking around the gallery and accepting what is in our sight. Not only the color of the front side but also the back side of the painting is viewed.

N: I just wanted to create a room with a variety of the colors including front and back sides. You can see, for example, yellow over the blue, and more others, just like the moving your own viewpoints among the paintings. Each work has tendency in color, of yellow or blue, and I carefully coordinated the color balance, so that the viewer can feel it in accordance with my intention. 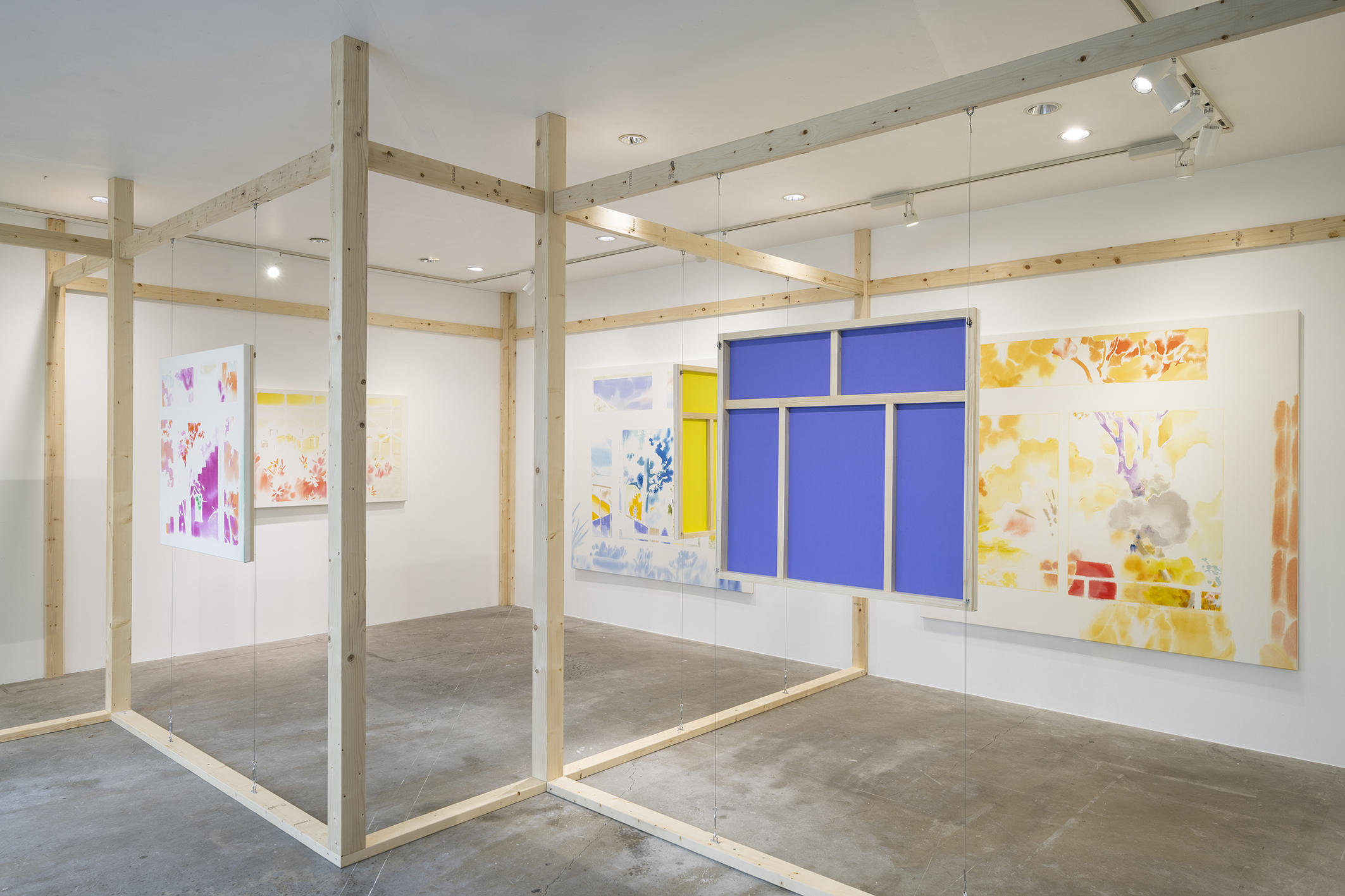 G: White area for window frame seems retreating compared with other colored area. The edge of the sash frame is stained or blurred. Is it something new, since it is different from the white blank often represented with gesso?
N: I was then interested in the materiality of the paints, but not now. Rather, I managed to create a contrast between the inside and outside of the window by leaving the window frame white and by depicting minutely the landscape seen through the frame. Why white frame? It is because the level of the “painting inside the painting” would the same if I paint the fame blue, for instance. To paint and not to paint is the way I chose instead of use of paint as material. However, the minimum depiction may lead to misunderstanding that there is nothing represented, so I represented in a vague way motifs of trees, silhouette and other landscape elements and shed light on the fenestras while suggesting the near-distance view. Painting inside the painting is occupied with the blank space, and the pictorial level was challenged to be the same through the depiction inner painting.
My first trial for depicting the rectangular form in the midst of natural landscape goes back to my exhibit in 2013. 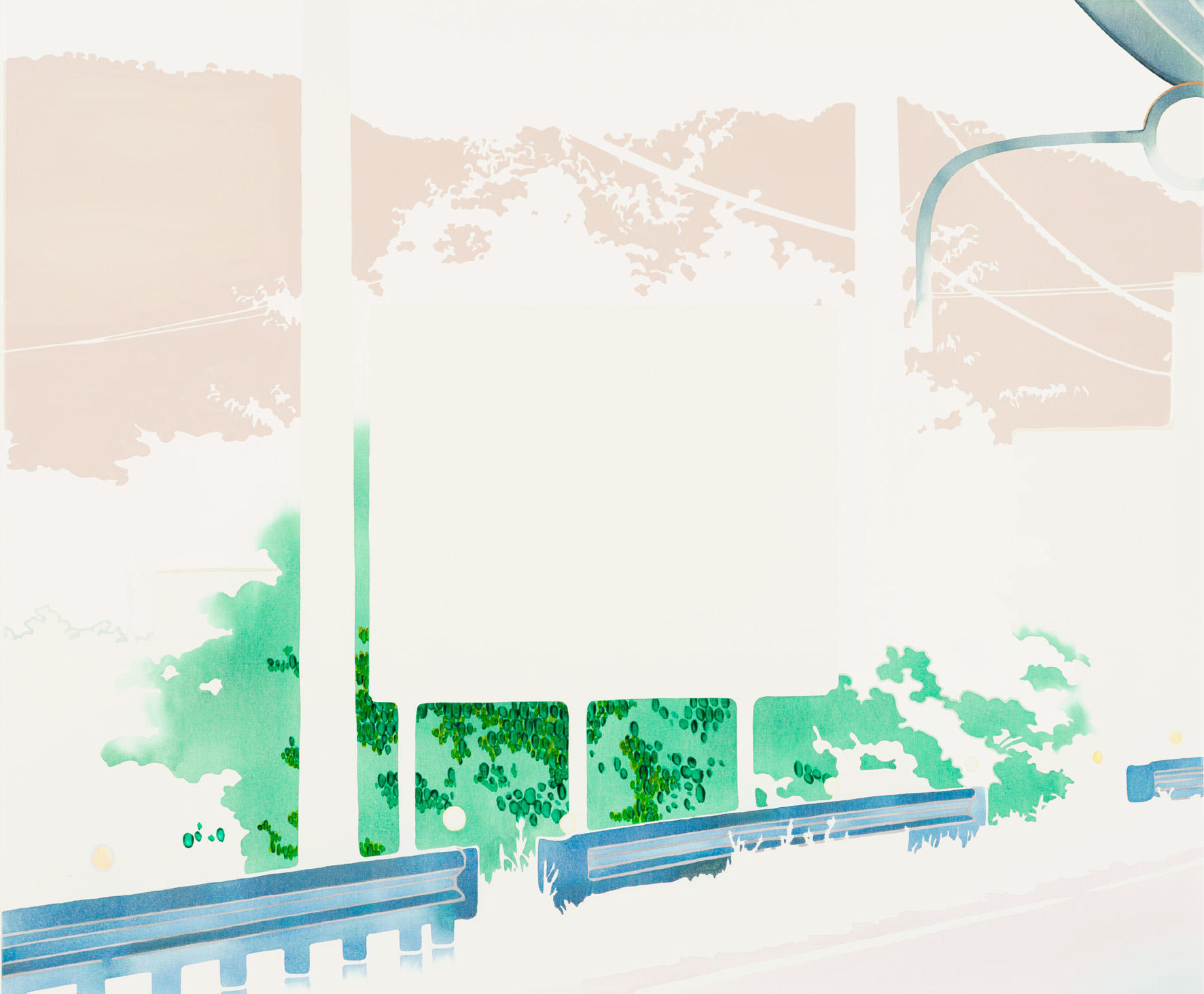 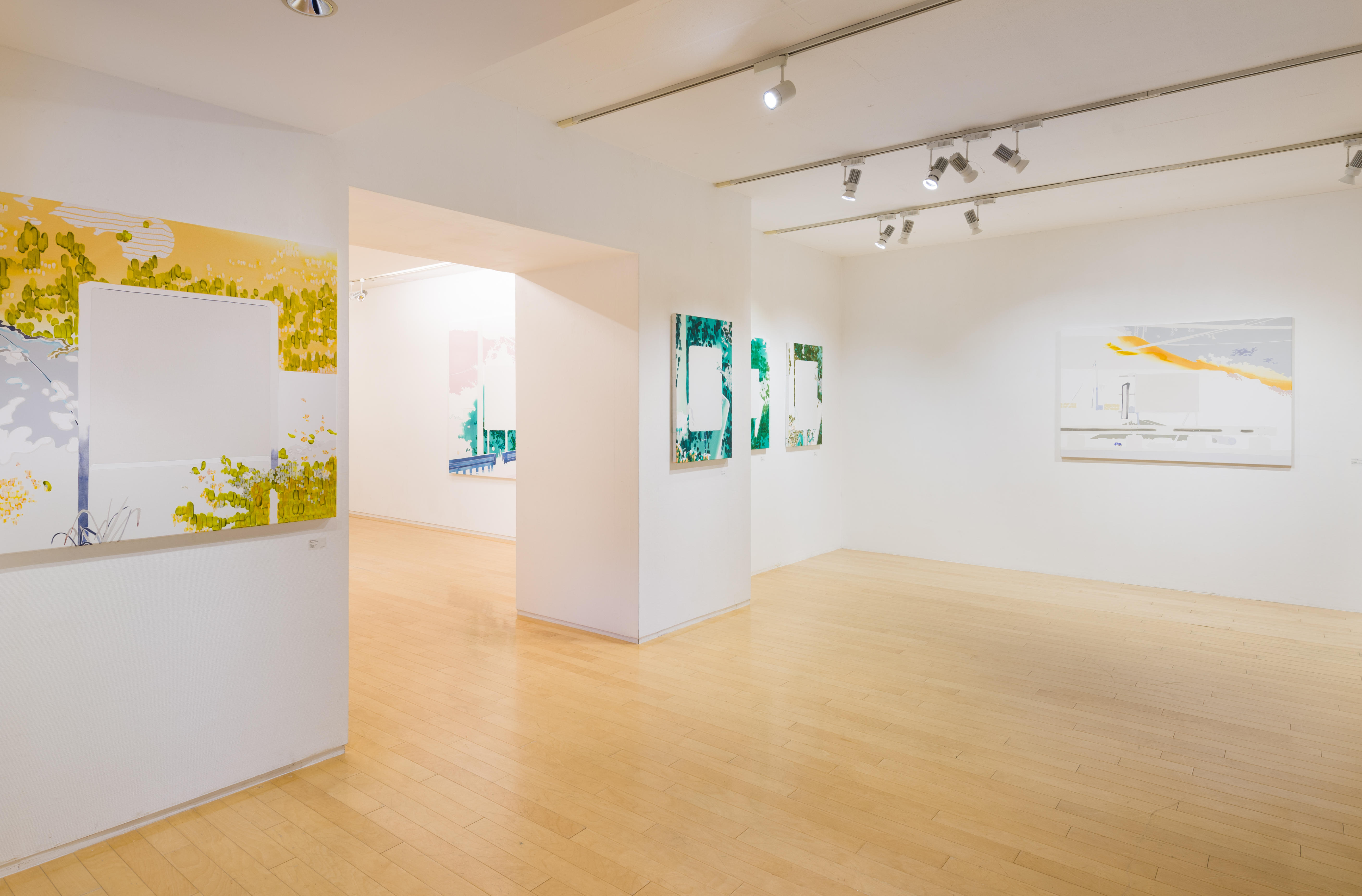 G: This Kanban or signboard with blank space in the center seems to be associated with the challenge of the current exhibit. Signboard appears suddenly in the city scape, blocking our sight or sense of depth,
Moreover, in case of fenestras, we see the landscape through the viewfinder provided with the three dimensionality.
N: The code of the motif differs between the window and signboard, and that may be the reason why the issues of three-dimensionality is slightly different between the two. I have long studied what is landscape, depicted it, and I think that the painting is what enables people to see something farther away from the representation on the surface of picture plane. However, if you turn around to watch the reverse side of the painting, it has its own dimensionality differing from that of front painting. You may return to reality, and will feel the contrast between the front and back sides after enjoying the painting itself. These personal experiences of my own have inspired me to create this exhibition.

G: Did you depict a specific landscape with affluent greenery?
N: Most of the motifs are trees through the window with sceneries where once inhabited by the people living and working there. I researched a western-styled manner house near Kobe, and the proportion of the window is unusual.
G: Certainly, it is very characteristic window!
N: I could for the first time realized a way of installation I have long wished. My general concept remains the same, that is, landscape including nature and artificiality. I enjoy the contrast between the nature outside the fenerstras, artificial form of rectangular frame of window. Depicting windows and installing them accordingly is my challenge to enlarge the artistic horizon, which, I hope, lead to another stage where I try to find another motif. 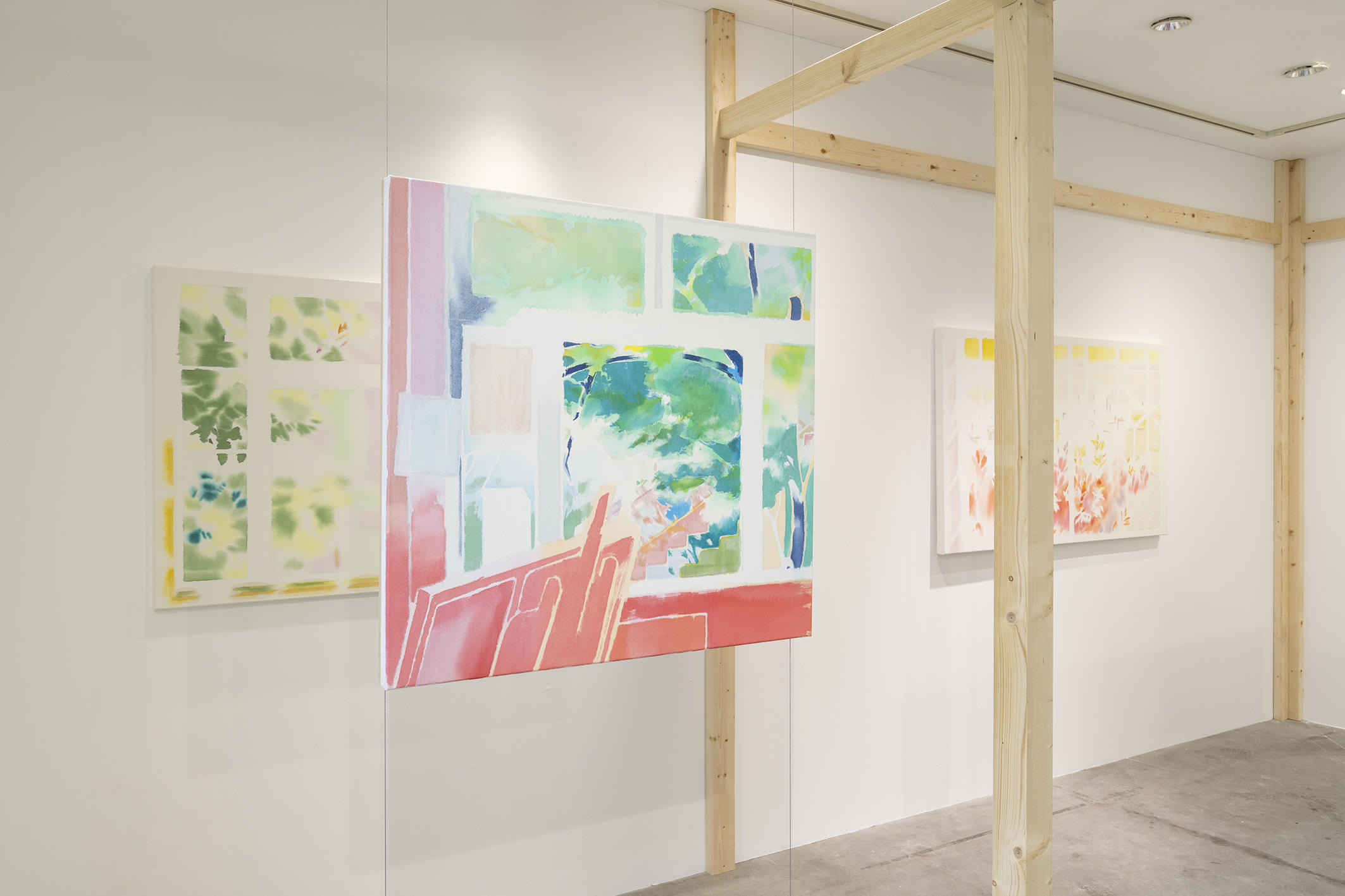 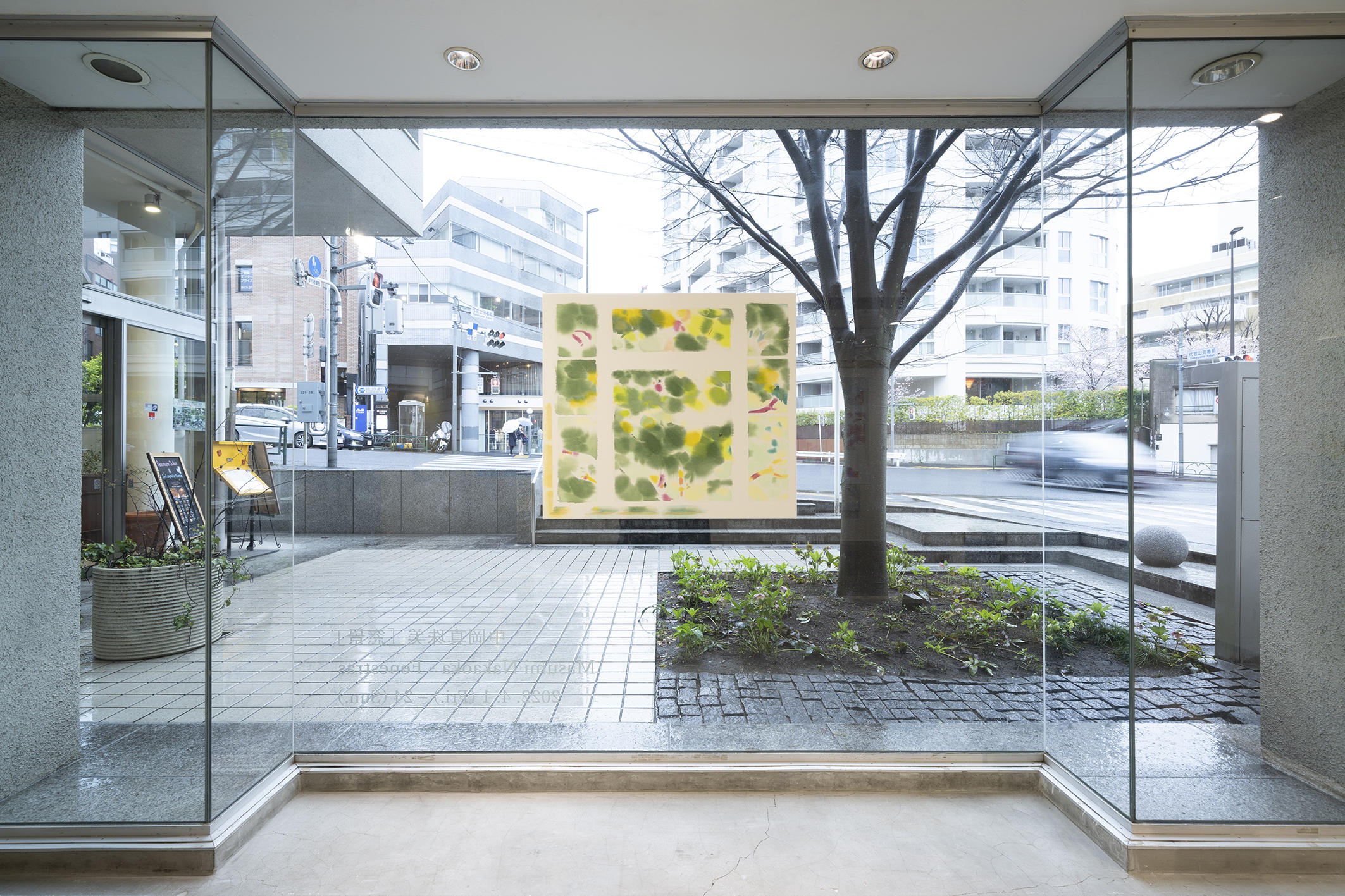 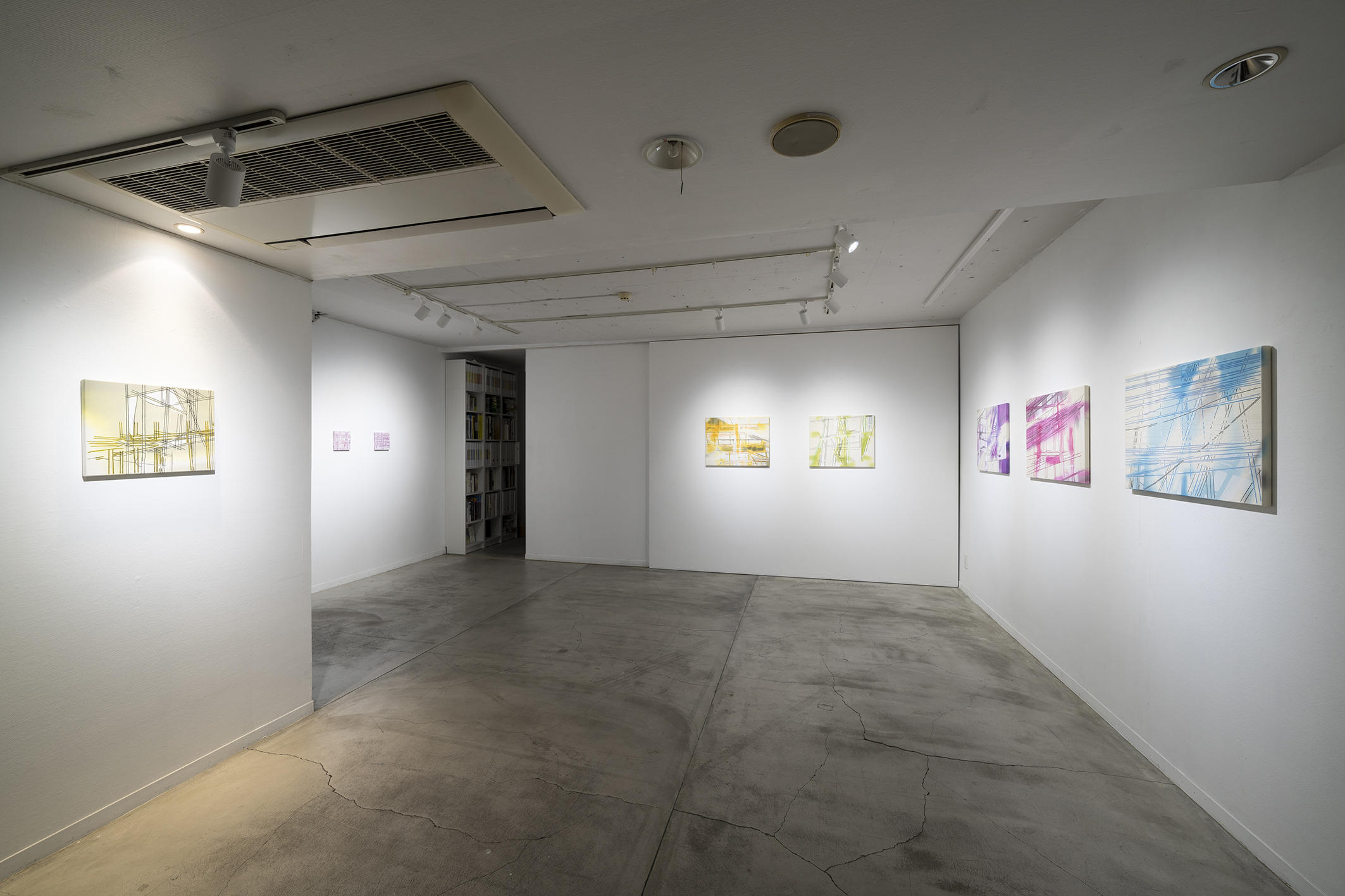 N: In this room exhibited are the works where so-called perspective does not influence the picture space. In these works, I accumulated the lines of the same diameter, trying not to generate effect of pictorial touches. These dots are the initial direction, followed by the motif of lozenge form in blue. To keep the same size, I used the sharp-pencils instead of pencil, focusing with the lead of 1.3mm diameter. To finish, I applied the glittering medium.
G: They remind me of your drawings of demolition site in Thailand. At that time, you stated that those lines would not cross with each other nor produce the layers. Can these rules be applied this time?
N: Now the lines are crossing with each other, and the lines appear more clearly on the background of the layers contrasted with the staining in color. Although the motifs are similar to those in the past, the content is fairly different, I suppose. If the works in the past is the result by chance, the those in this current exhibition are added by the return to the painting last minute. 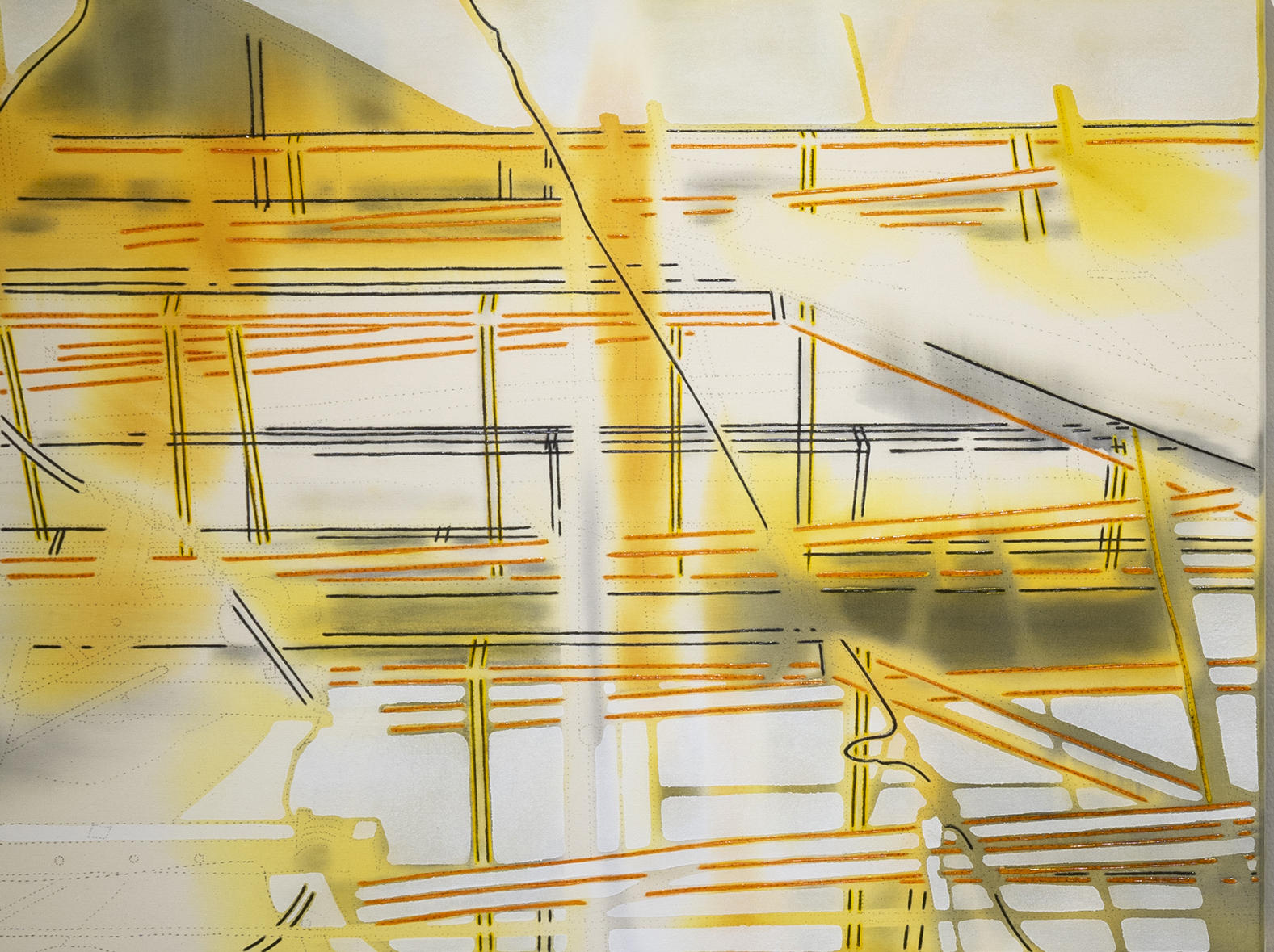 G: As a whole, our view is induced horizontally, while invited to the depth in between.
N: I intended the horizontal move on purpose. Mainly these are integrated as the presentation of lines, where the repetition of the lines as well as sense of deja-vu may generate such feelings. 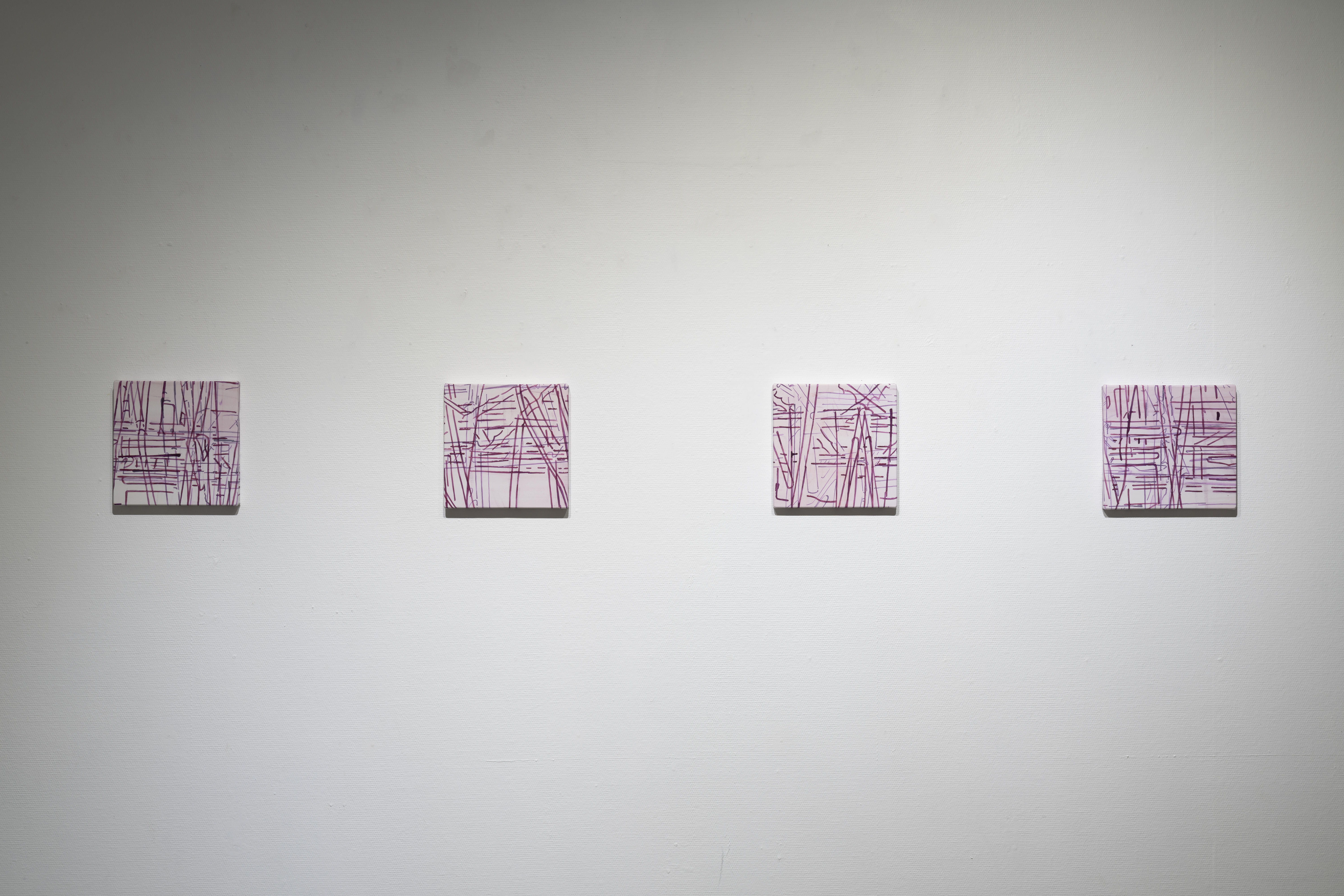 Masumi Nakaoka: Fenestras is through April 24. We hope you will enjoy the adventure of two-dimensional work. 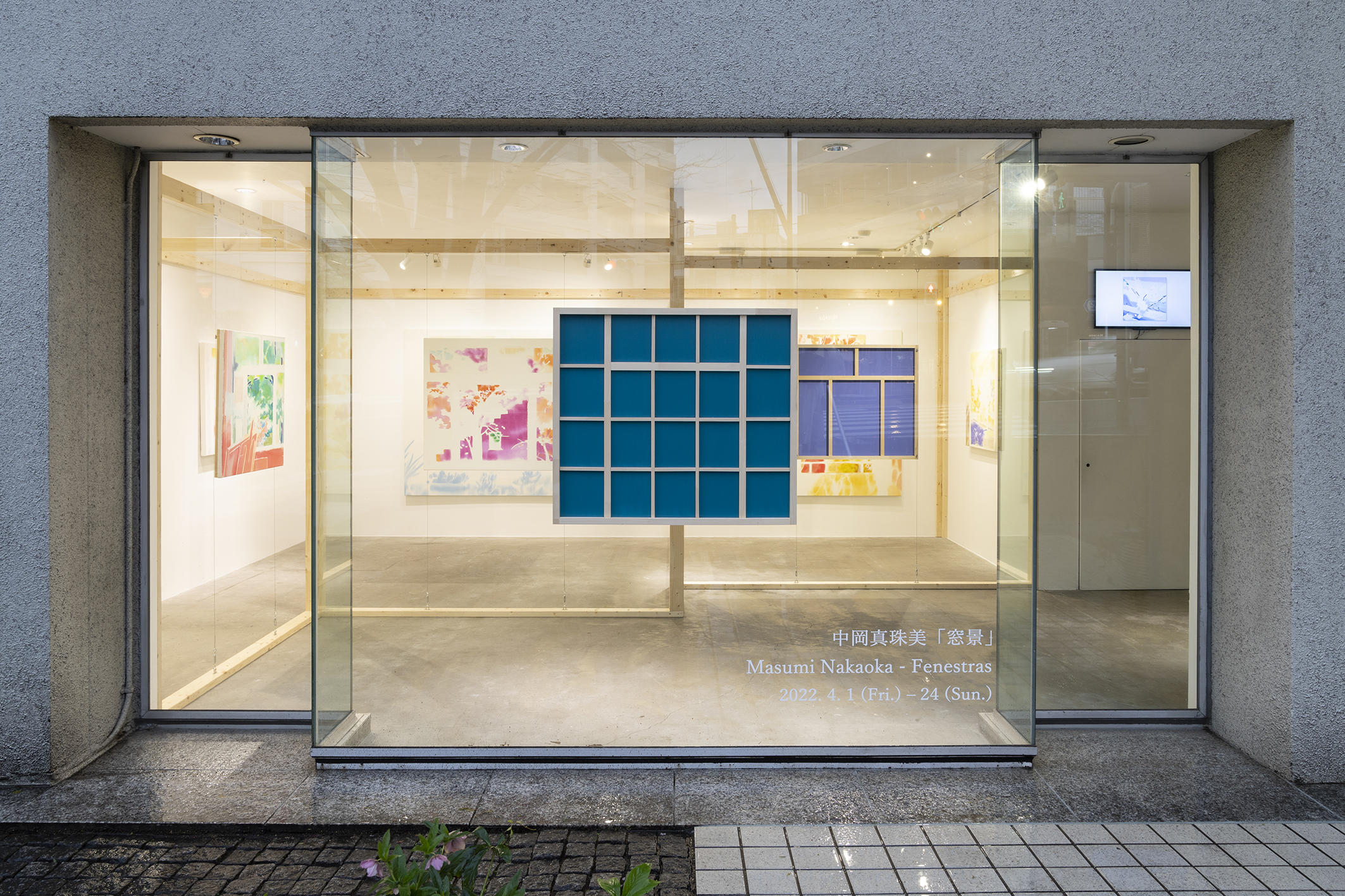