In our current exhibition "Masumi Nakaoka: SCALE PUZZLE", the core work is composed of one hundred pieces of drawings which represent interior scape of the artist's atelier. These drawings were sketched directly without using photo, and we interviewed the artist why she changed her creative process to reveal her own renewed concept.

I have painted landscape for about fifteen years, I still create paintings, and the new work is composed of interior-scape and still life, which are more familiar and less distant for me.

Recently for a couple of years, I am interested in the distance between the painting and the motif to be depicted. How I represent this distance is, for me, more important than changing the space of the artwork. If the distance between the motif and artwork is short, long or even detoured in each case, then the output or final form will be different with the quality of the space remains the same.

This solo exhibition is one of my challenging of this line, and this time I wanted to draw a work whose distance from painting to motif can be represented bi-directionally. For that purpose, I picked up interior-scape where I can control each motif, as something touchable and familiar.

Another reason for leaving photos as a tool for sketching landscape was a kind of unpleasant sensation vis-a-vis using photograph as my esquisse. What you see through a snapshot of a photo is a processed fragment of the reality. For me, I have nowadays less and less direct feeling when I look at a photo. Instead, I would like to recognize more correctly and accurately what a photo is, so I had an uncomfortable feeling when I use photographs as a mere tool for sketching. In our present world, photos prevail a lot as general atmosphere, and I am not "against", but I am less interested than before in painting on the basis of photo of trees, for example, removing the filter to be more direct.

In fact, to draw directly the objects is to remove "filter" between motif and me, which used to exist as a photo whose image was printed on paper through reflecting light of the objects. I was very curious to know how the "distance" in subject will change without photo filter. The vector from the object/motif toward the painting would certainly be changed by such process. 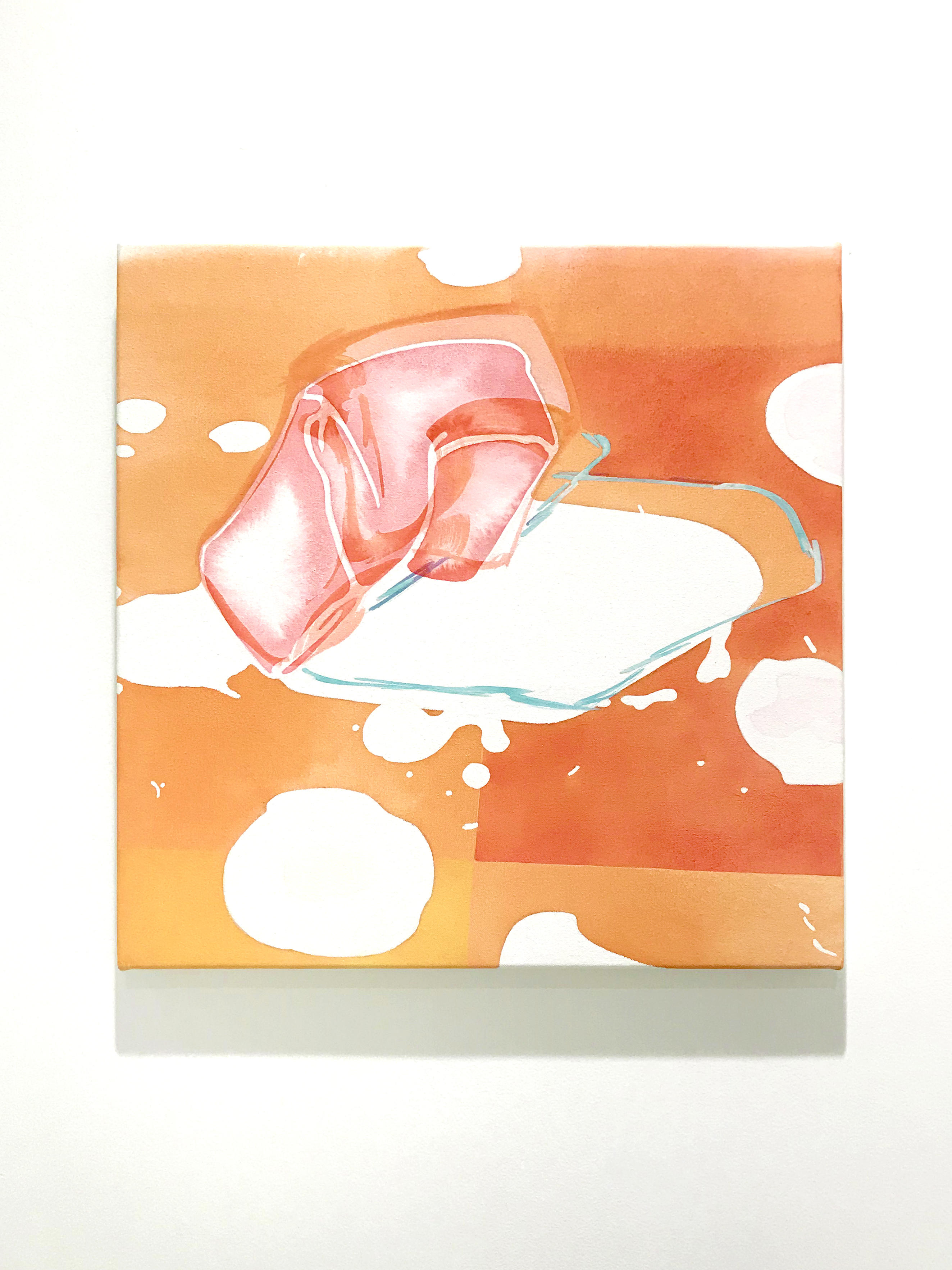 Before starting, I was wondering how my drawing would look like if not using photo, so I selected my own atelier to be depicted which I can continue observing every day.
The Pillow Book and Haiku as analogy

Drawings of SCALE PUZZLE or in Gallery A were produced in this new approach, while works exhibited in Gallery G were generated with rather ordinary painting process: white base with reduced colors on it.

For this exhibition, I asked Professor Kazuo Oike, president of Kyoto University of Art and Design, for the text contribution of the flyer. Professor Oike once commented my painting that it looked like Haiku or the Japanese poem composed of five-seven-five letters only. I was then deeply impressed with his words, since I was struggling for some new output within the painterly rules imposed by myself. I came to know him several years ago, and he had already a detailed knowledge in Haiku.

My friends are various from writer-like Haruki Murakami to philosopher-like Sartre. Then what shall I do for my own identity without copying other friends? I was inspired by the concept of Haiku conveying the world you watched through very limited letters as well as a seasonal word, which seems similar to my own challenge in painting.

Works in Gallery G are associated with Haiku, while works in the other gallery may refer, piece by piece to "The Pillow Book" of famous phrases, such as "In Spring, most beautiful is dawn", "In Summer, the night" if you do not have "what is awful" in this piece. In other words, drawing "Interior-Scape" is composed of each piece, representing a lump of my own thought. Each drawing is like a prose, since it is fragmentary but in sequences rather than a large scale story. I see something in common between my drawings and prose in Pillow Book.

As I said before, this time I drew directly without completely abandoned my method with taking photos.

"Hide-and-Seek at the Kyu Asakura House"

In this gallery, I exhibited a series of painting of Woods, given the theme of 50th Anniversary of Hillside Terrace.

These painting have been based on photos in Asakura House. In the same composition of lateral format like scroll painting, I also painted woods of Ginkakuji Temple in Kyoto or that of Chiang Mai University in Thailand, where I spent whole year.

If the first glance is similar among these, the depicted places are totally different, whence the "light" is different. For example, light in Japan is not at all the same as that in Thailand, especially the form of the light. So the space which develops horizontally like scroll painting in Old Japan stays the same while the scenery or season will change in their different respective way according to the pieces of work.

When I mention Haiku for these paintings, I mean that I tried to present the full charm of the light form, by omitting abundant elements behind. 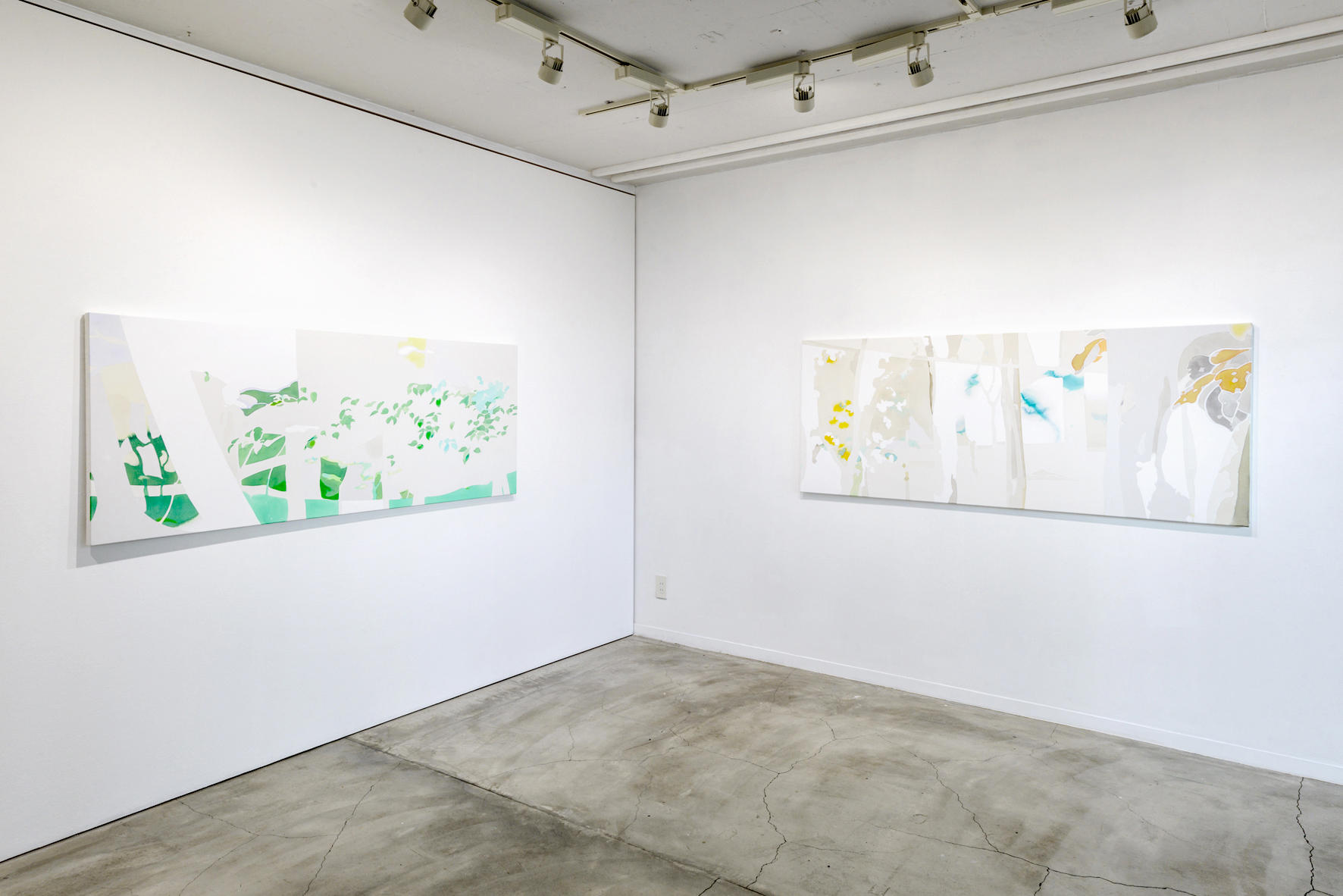 The exhibition will continue through December 1st. Please enjoy the world of Masumi Nakaoka with its different approach toward the creativity.