Art Front Gallery is pleased to announce ”Takako Hojo Solo Exhibition：white out". We appereciate your kind visit to witnesss the latest work of the artist since her last exhibit in Art Front Gallery in 2018.
The title "white out" includes the meaning that "blind by dazzling light" or "sensual shot by colors or forms" . her continuous interest in the light allows the artist the minute research of the various materials to compose her works, from the processing of the ground to the finishing stage. These works, in addition to the composition of picture plane, shed light on the "paint" as material generating illusion of the picture, with the "light" coming from the plane surface to here on the side of the viewers.
In this exhibit, shown are the new series "white out" with the motif of water surface as well as the series depicting light with plants and flowers. We hope you will experience the "light" depicted by Hojo at the venue.
On the Art of Takako Hojo

Takako Hojo’s working method has been consistent ever since she was a student. She makes multiple watercolour drawings at any vista she wants to depict, and uses these as the base for a final oil painting, produced in the studio. Such is her standard procedure.
The means by which she captures her selected scenes in watercolour has changed little, yet her completed oil paintings have altered several times. She repeatedly transforms the way she shifts a landscape into a finished work, that is, into a completed painting.
Until about VOCA 2004, Hojo’s works were surfaces in flat, even, matt white, spreading across the picture. Small, controlled touches of colour were added as top layers. The results were highly abstract. Then, in 2006, while artist-in-residence at the Ohara Museum of Art, she underwent a drastic change. Hojo began to represent actual scenes. Since then, she has filled her pictures with representational elements, although the level of representation and emphasis on paint materiality has varied.
Hojo’s distinctive white, even layers disappeared in 2006. We can call this a pivotal shift, but her work changed in more than just degree of representation whether she employs it or not. Looking back, we can understand her previous work in a new light. Hojo regretted that work she exhibited at VOCA 2004 developed surface cracks. Looking at those paintings today, we can understand how the long, monotonous procedures required for making their white surfaces, filled with subtle tension, must have been crucially important, and therefore more severe to her, even than they seem to others.
So why has that even, white layer reappeared now?
There are multiple factors, we can’t say for sure, but my guess is that she is seeking to incorporate into her painting world a fine, interstitial entity. This is something lying between reality and its virtual image. This entity is an inter-being, between what is depicted on the picture plain, and the materiality of the paint that renders it. The flat, white, matt layer spreading over the whole surface is, indeed, the thickness of paint. It is image without representation. On this are overlaid colours of glossy tactility. Hojo is putting forward an evolutionary process within her painting itself, that is, in the relationship between the actual, and its painted version. 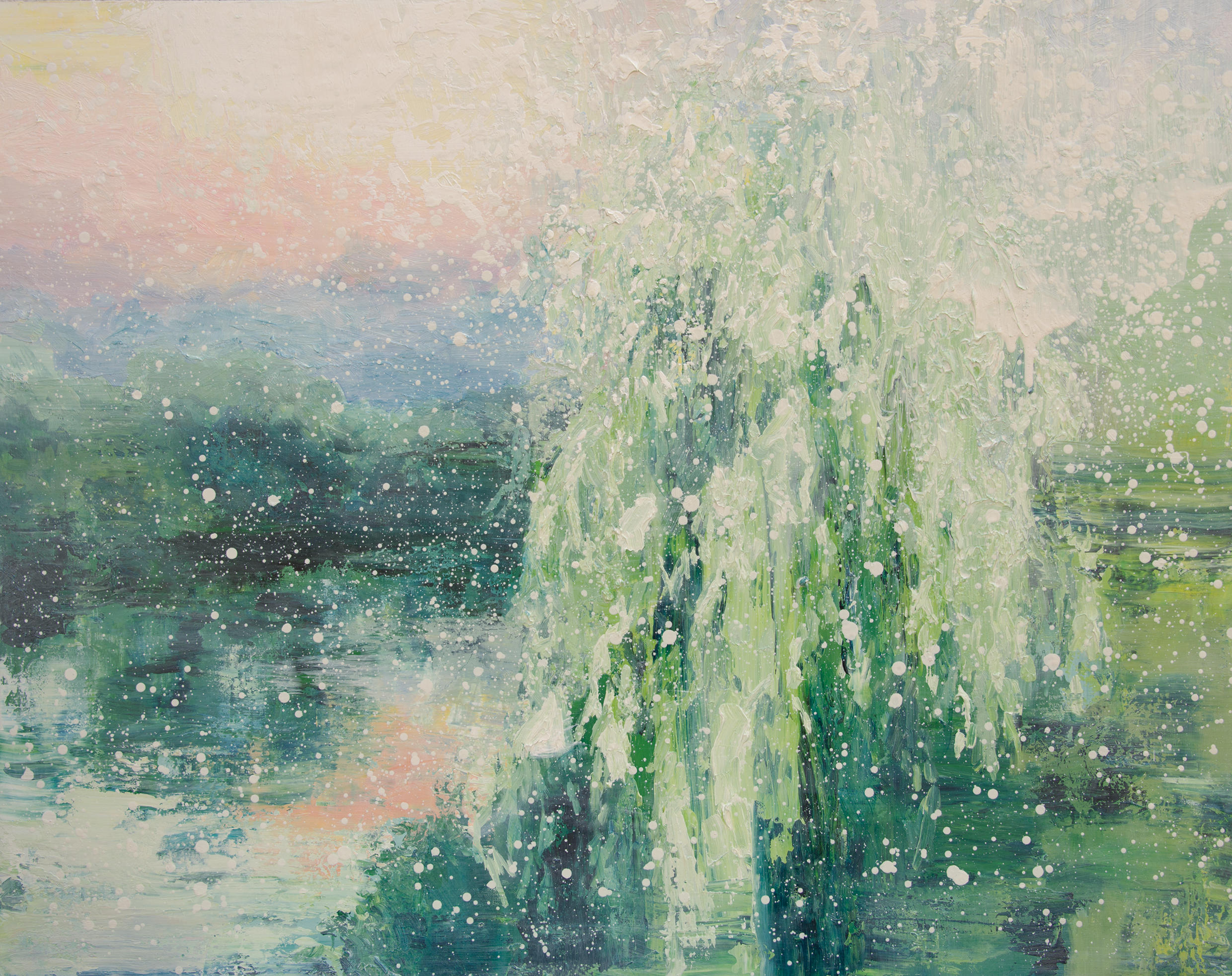