To me, Aki Yamamoto is an artist who takes the world of canvas, where things are drawn flat in confined space, and makes them more strongly spatial by being hung on a wall. Her world in small canvas is so constructed that it offers something much larger than life. This is beyond artists who see their pictures as mere windows in the world. In recent years, Yamamoto has created layered work constructed with images culled from magazines, landscape, and also scenes of light and shade seen through a window. Her forms can be abstract or representational, but they always appeal to viewers by their interplay of form and colour. For example, she shows varying light coming through a window, casting shadows of curtains across an interior space, making a tableau. She brings familiar objects together on the canvas, and when hung on a wall we find a new force in them, call it a collage with the real world.

In 2007 we reorganised our gallery and began looking for artists with fresh ideas. It was by going through exhibition catalogues that we found Aki Yamamoto, represented in a 2004 catalogue from the Sezon Museum of Modern Art. We invited her to exhibit with us in 2007, even though at the time this gallery was still Art Front Graphics dealing only in prints.

Yamamoto participated in VOCA in 2002 and 2006, but her work shown there was different from what we saw in the Sezon Catalogue. Placed in chronological sequence, you can see movement along a consistent path, her paintings opening up to viewers, as if on a research trajectory. Beginning experimentally, she has become more and more confident, and never been tempted into a private, individualistic world. Her canvases are not just square painted objects, but are capable of altering the atmosphere of the surrounding space. The manner in which her work relates to the external world has been through several changes.

Just prior to this exhibition, Yamamoto participated in Quintet II: Five-star Artists, held at Seiji Togo Memorial Sompo Japan Nipponkoa Museum of Art until mid-February. One piece there had been shown at our gallery three years before, but otherwise her exhibits were new. Some of those works will be shown at our exhibition. In the three years since we last showed her, Yamamoto has made strong progress, but retained her original qualities. Judging from the transformation she has undergone, we believe Yamamoto is an artist to watch out for. 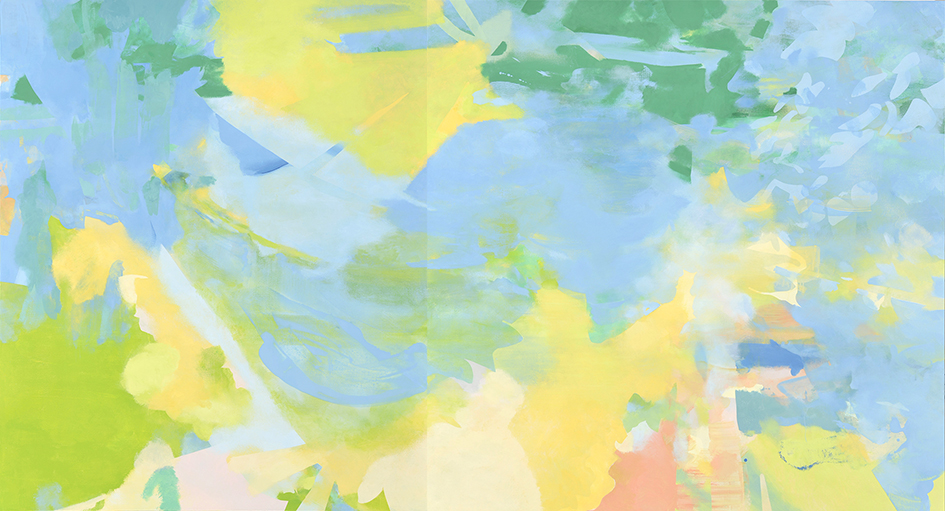 exhibited in the group exhibition ”Quintet” 2015