【 talk session by Aki Yamamoto and Takao Tsutsumi 】
Mr. Tsutsumi, president of the renowned Sezon Museum of Modern Art, kindly contributed a text to our exhibit. He has kept a wide viewpoint around the art in and out of Japan, and will explore the charm of Yamamoto to put in the context of art today.
We wish your kind participation in this event.

■Date : April, 19 (Thu)19:30-
■Free
■Venue : Art Front Gallery
■Reservation : tsuboi@artfront.co.jp
Session will be followed by a reunion at the bistro next. (3,000JPY a person)
Thank you for your attention. 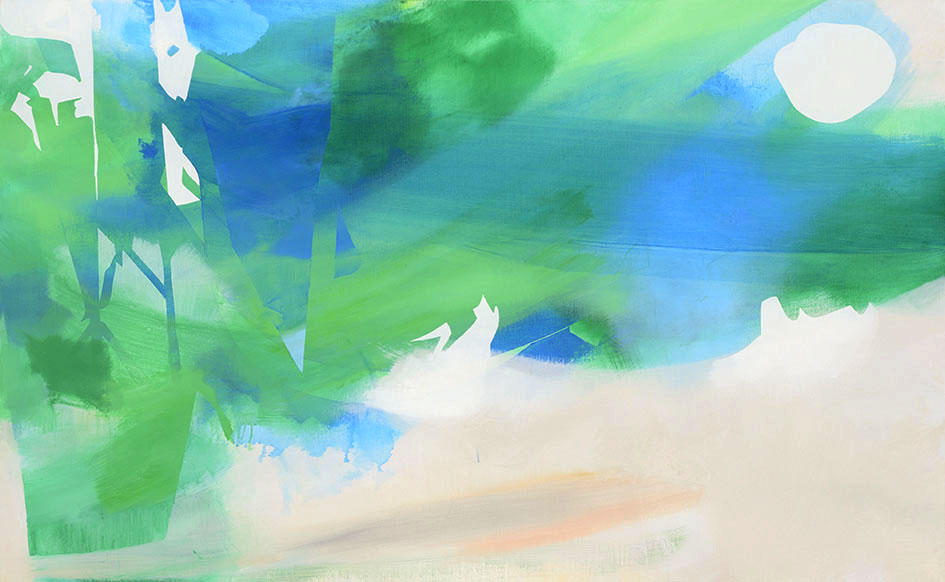 I first met Aki Yamamoto during ART TODAY at the Sezon Museum of Modern Art, where I am president. I already knew her as an artist who took colour as her main theme and worked in the lineage of Art Informel. Some years later, I encountered Yamamoto’s work again, and on that occasion was deeply impressed. None of her work has a single, central point. At first, her colours - green, orange, yellow-green, white and blue – appear in conflict. But actually, they form a symbiosis. This harmony does not exist only between complimentary colours, but also between contrasting ones. During a conversation with Yamamoto I learned that when she was young she enjoyed looking at shadows of trees outside her window cast in her light-filled room, and at how they changed with the weather or time of day. She also told me that in pursuit of colour she is very particular about her oil pigments. In an interview during her 2015 exhibition at Art Front Gallery, she claimed, ‘one can create three-dimensional space in two-dimensional painting.’ She meant that she engages viewers in a dialogue on the topic of ‘the relationship between the visible and invisible.’ To borrow the metaphor of Plato’s Cave, we can say the ‘shadows’, or ideas, are what she makes in oils (that most three dimensional of pigments), while the memory on the cave wall, is in the fragile human retina.
I said above her work does not have a centre and her colours live in a comfortable symbiosis. I feel this is Yamamoto’s most important theme because it reflects how the 21st-century world should be. We now live alongside natural forms, having finally left behind a century of human-centred fighting, and the conquest of nature, derived from Christianity and Western ideology of confrontation.
As I write this paper, pondering Yamamoto’s work, I am overcome by an ecstatic feeling, as if daydreaming. I recall a beautifully epic passage I read in a novel long ago,

‘In the morning, when rain has just stopped, it is trees that shine most vividly. The colours of their fresh verdure, swinging and buzzing while bathed in light, can be so sharp they give my eyes a kind of pain. …   The air makes me feel purified, while a balmy breeze blowing through the streets somehow appear to my eyes as a faint green.’
(From Hidetoshi Sotooka, Kita kikô [North Return Line] (Kawade shobo shinsha, 1976)

I will go on admiring the pure artistry of Aki Yamamoto, who does not stop exploring frontiers in the manipulation of colour, but also shows a self-denial.


Takao Tsutsumi President of the Sezon Museum of Modern Art