Art Front Gallery is pleased to announce Eko Nugroho’s solo exhibition: Nowhere Is My Destination.
Born in 1977 in Yogyakarta, Indonesia, Eko Nugroho began his artistic career in the late 1990s when he was still a student at the Indonesian Art Institute. He now works across the globe as one of the most prominent Indonesian contemporary artists. Nugroho is a member of the “reformasi generation”, experiencing the democratising social reforms in the wake of the collapse of the Suharto regime triggered by the Asian Financial Crisis of 1997. The privilege of freedom of expression, which suddenly became a reality, has allowed him to create a wide range of artworks while projecting his own socio-political views.

Two elements, Indonesian tradition and references to contemporary pop culture can be seen as contribution to Nugroho’s works, which are created in Yogyakarta, the artistic centre of art on Java island. While introducing traditional batik and embroideries, his artworks reveals strong influences from contemporary art forms such as street art, graffiti and comics. He creates artworks in various media, from drawings and paintings to murals, sculpture, animation and tapestry.

For this exhibition entitled “Nowhere Is My Destination”, Nugroho creates two-dimensional artworks, sculptures and murals responding to the theme, the present and pressing issue of immigration and national borders. Through this exhibition, he explores issues concerning borders, migrations and the identities of those who were forced to leave their countries behind due to wars and oppressions. He describes the irrational reality as “a wall” which still surrounds those who have been dispersed from their home by conflicts and oppressions in this 21st century. While people largely agree that that this issue needs to be resolved in the democratic society, the doors to migration are getting narrower and narrower. Nugroho projects the loss of identity or the difficulties faced by those who attempt to becoming a new member of a community. His artworks capture how hard they try to survive and desperately adapt to a new environment while being tossed about by changing policies and regulations.

Human figures and symbols appearing as motifs in his artworks represent people who have had no choice but to migrate due to wars and political crises at home. The sculptural work from which the title of the exhibition is drawn is the embodiment of a migrant community. This figure covering its origin with a mask and holding a knapsack in one hand while chained in leg-irons would confront viewers with the clash between their thirst for freedom and the harsh reality they would have to face.

This exhibition is organised in co-ordination with the inauguration of the autumn iteration of the Setouchi Triennale 2019 from 28 September 2019. We hope you will be able to see both exhibitions this autumn. 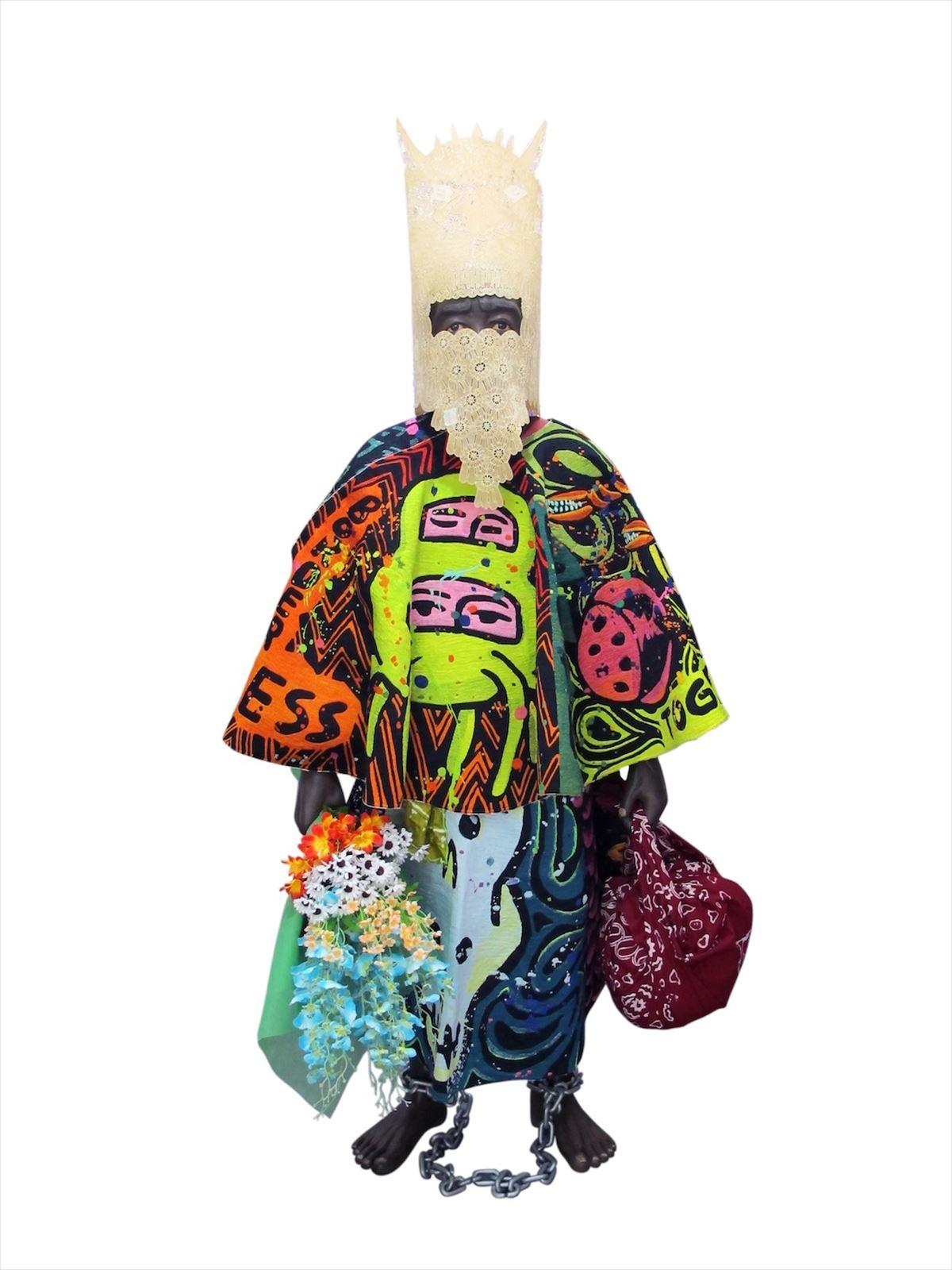 Art Front Gallery proposes solo exhibition, in two wings, of Eko Nugroho, Indonesian artist, working in Jogjakarta. In both Daikanyama and on the Ibuki Island in which Setouchi Triennale is held, the exhibitions develop around the notion of border as well as of migrating movement. The migrants are represented in the work there as hybrid or camouflaged figures, revealing the difficulty of belonging to a world or another one beyond the border. The expression of these painful and tortured identities is created by the play of compositions of color tints and of motifs transforming the images in optical riddle.

If the artist works on the problem of the wall and of the border, it is with the excess of lines or with surplus of accumulation of the forms or interlocking images that Nugroho depicts the invisible walls of our society more powerful and violent than those falsely assuring in front of our eyes. Behind the images effusively childish in their playful colors, audience will be confronted with monstrous imbrication of lines and of sense. Nugroho replaces the clarity of the line with the maze of nightmare, inviting us to follow the exercise to decipher the meaning beyond the exhibition, as far as reaching texture of our everyday life. The frontality of the faces and execution of collage remind us of not only the street art but also of typical Indonesian art with landscape. Moreover, his art is associated with camouflage: an art of the war and of the survival. Camouflage oneself is to change his personality by fear to avoid his predatory.

For his exhibitions at Art Front Gallery and in Setouchi, he uses this rhythm which is very fast and stressed like that of graffiti as well as abundant vegetation scenes, extracting the viewers from their own environment and starting to ask the questions of false lines or borders again. Between fake border and true segregation, we have to follow once again the line of demarcation. With his powerful visual impact and his syncopal rhythms, the art of Eko Nugroho might be considered close to jazz: his free style, his innovation and his character extremely engaged and even militant. Using different materials (for paintings, drawings, embroidery, sculptures, mural paintings and 3D technologies) , recovery, repetition and rupture in his style, the artist invites viewer to penetrate his immersive space to get caught up in the game of its colorful solicitations, its lines and its false tracks. If Eko Nugroho uses square exhibition space (Art Front Gallery) or traditional house (Setouchi Triennale), this is to reveal the paradoxical relation at the border, since the walls are not always there where we think they are, and to show that the abundant motifs create by reaction the desire for escaping or desire for vanishing point. How to run away or to find the exit while the symbolical walls are increasing in all the real and virtual space? With his rhythmical installations, Eko Nugroho fights against the invisible walls of our society that break the identities of each individual for the profit of blind comfort.