Our gallery Art Front Gallery is located Daikanyama, Tokyo, nice residential area with much greenery, not far from Shibuya Station. Here, we have organized monthly exhibitions and events, focusing on both established artists and emerging artists leading main streams of art scenes today.

One of the unique characteristics of our gallery will be that we help to organize (our gallery works as a main curatorial and exhibition coordinating office) such art festival as Tsumari Art Triennale and Setouchi Triennale, renowned international festivals among others.
Tsumari Triennale, directed by Fram Kitagawa, is especially noted for its pioneering status since 2000 to rediscover values of the local community in the remote areas by means of art. We believe that art can take part in spurring community revitalization and in town creation through collaboration with the locals using sources in place, thus supporting community promotion and regional revitalization of depopulated regions. In fact, Tsumari Triennale has attracted large numbers of visitors and brought great impact not only to art world, but also to the present society with the limit of “globalization” just experienced by this coronavirus crisis.

Cai Guo-Qiang has long participated in Tsumari Triennale as artist as well as curatorial artist for his Dragon Museum. In 2015 he had a large installation of Horai Mountain based on Chinese mythology in Kinare, Tokamachi. The opening of this Triennale 2015 was celebrated with the performance exploding gun-powder on the paper spread on floor next to Horai Mountain, and the works were immediately exhibited in our gallery in Tokyo. 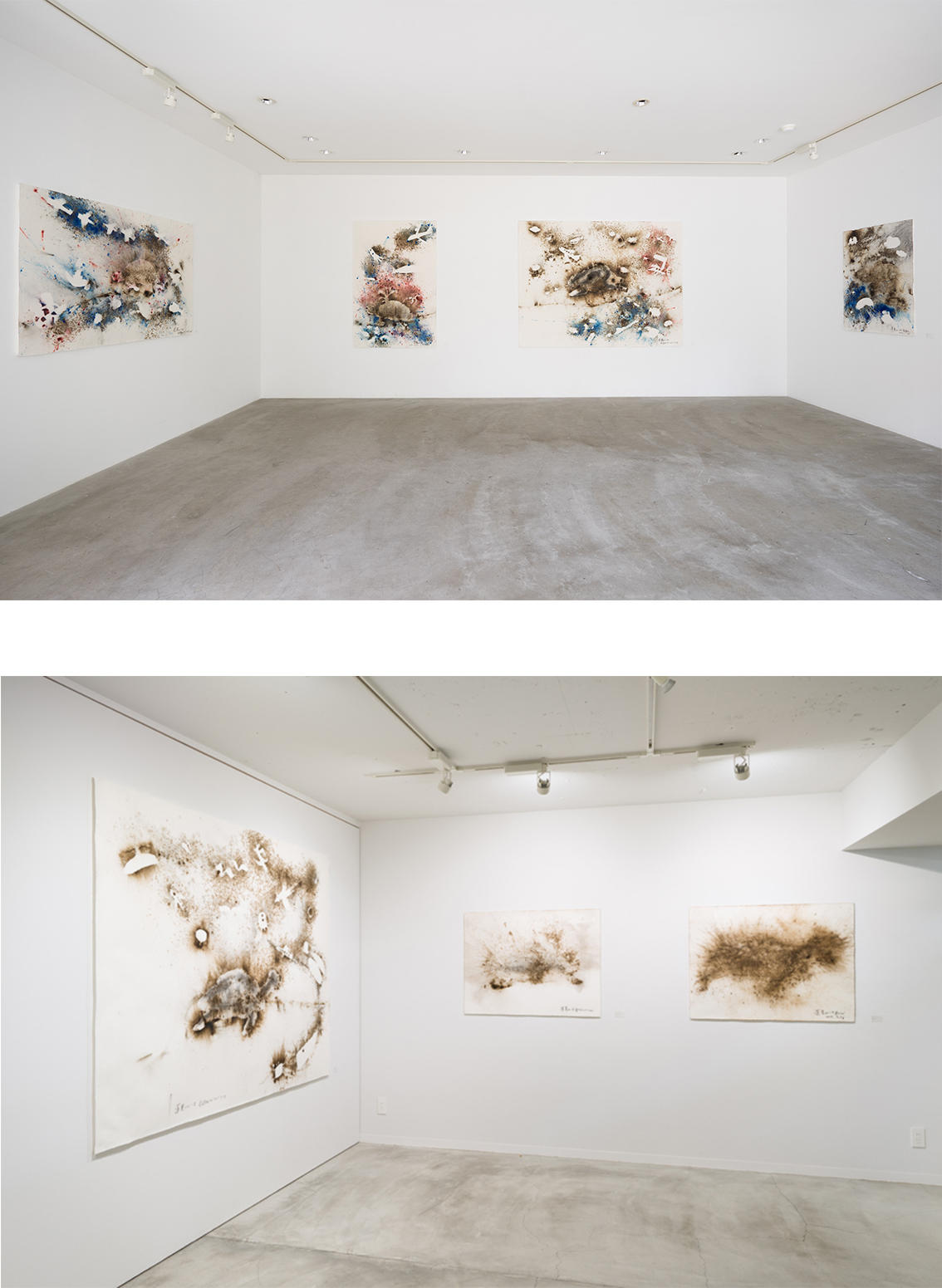 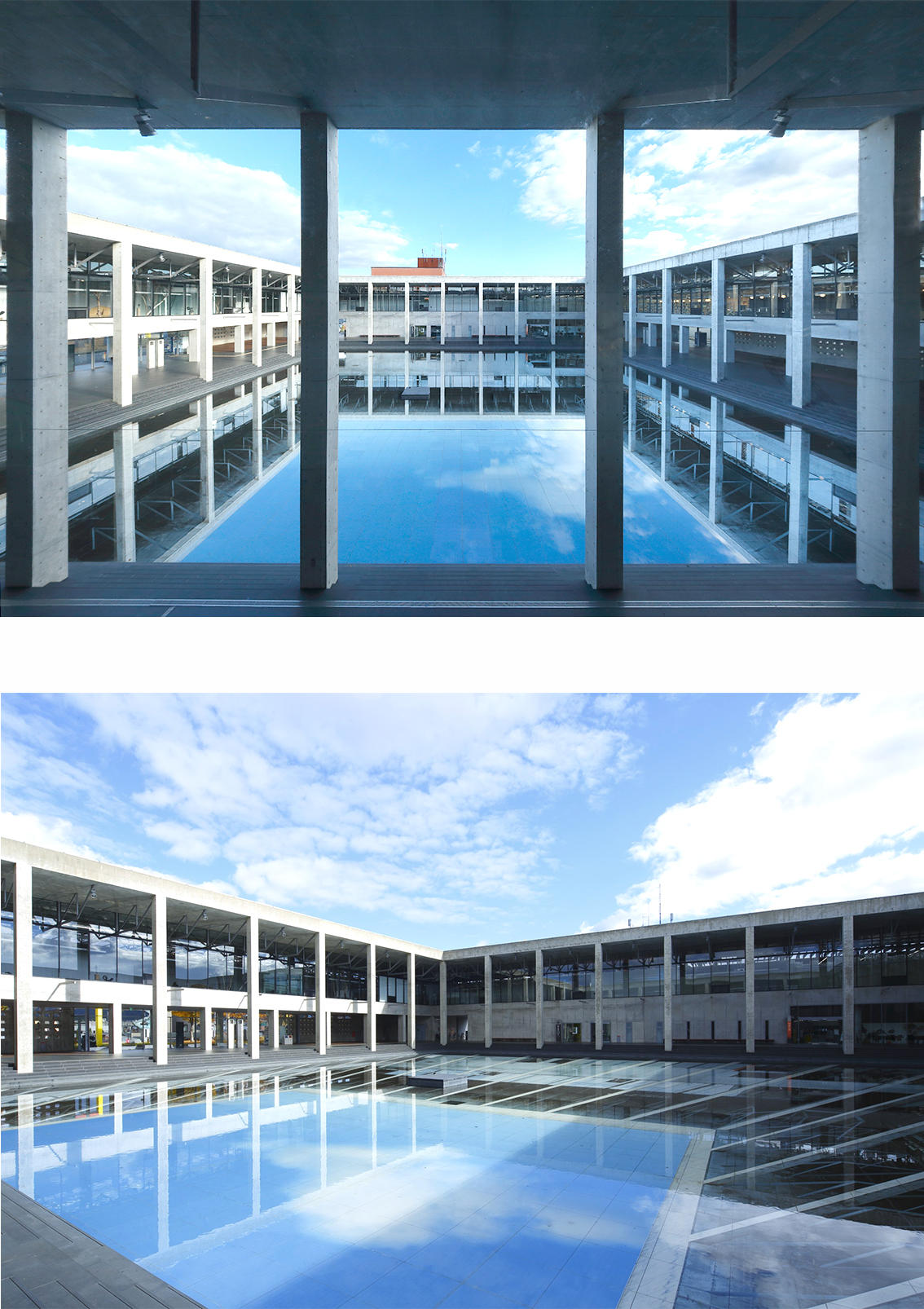 Leandro Erlich is another big artist who has participated in Tsumari since 2006. The most impressive and spectacular illusion realized by Leandro should be “Palimpsest: pond of sky” in 2018. The water face of the pond reflects sky and the colonnaded building around:“virtual image” or reflection of distorted painting on the tile under the water eventually align, from a specific viewpoint of the installation, with “real image” multiplying the floors of the building. Leandro also exhibited works in Setouchi Triennale (2010, 2019), and in our gallery (2014, 2018) synchronizing his first personal show at Mori Museum named “Seeing and Believing”.

Eko Nugroho, Indonesian leading artist who has been working with us (Art Front Gallery) since 2017 in Suzu Oku-noto Triennale, participated for Setouchi Triennale last year.

Also, Eko held his solo exhibition at Art Front Gallery at the same year.
He painted directly on the canvas-wall of the gallery, depicted the subjects he encountered at Setouchi and other areas in Japan. 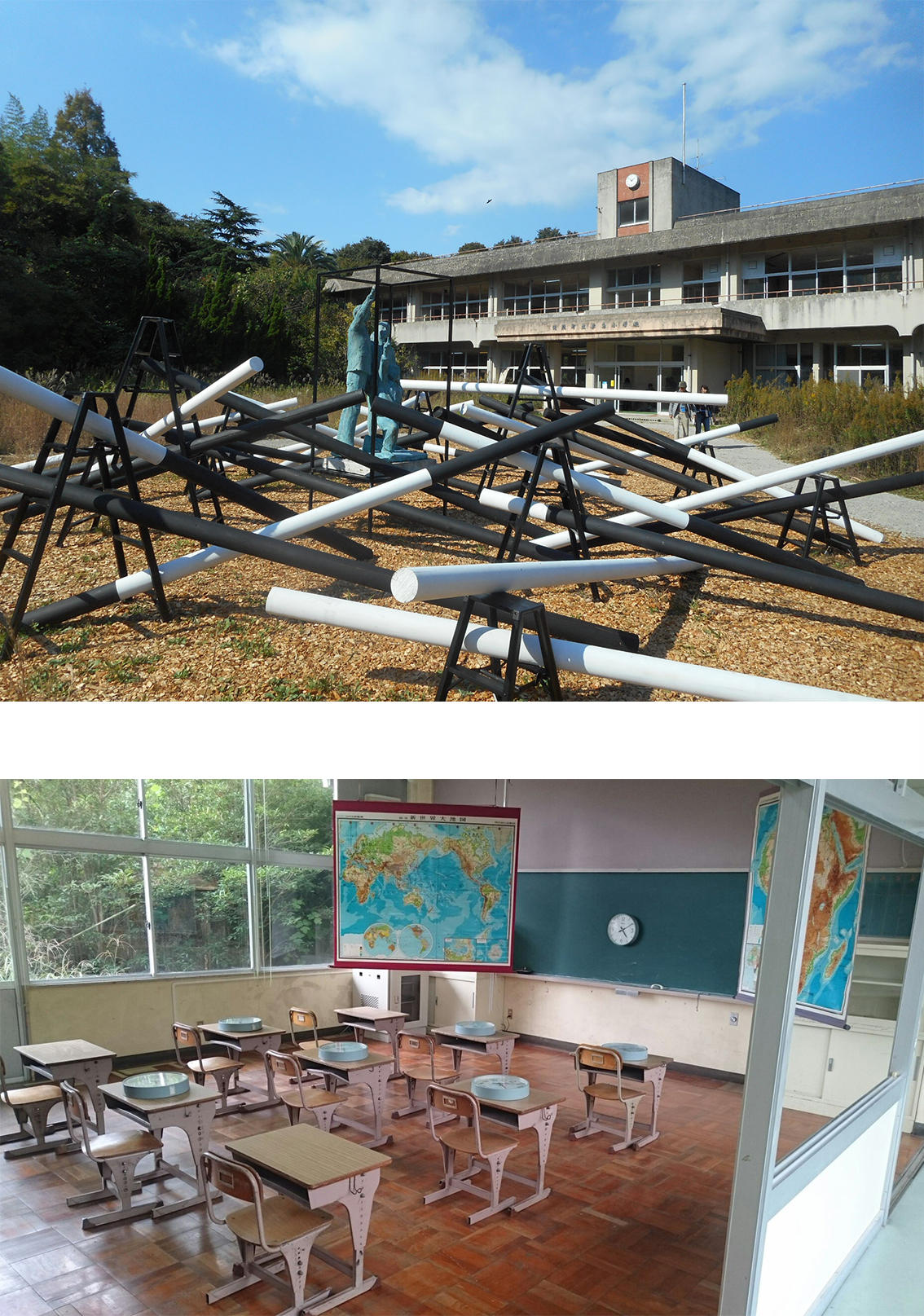 Installation view "The song of the children all Gone" at Setouchi Triennale, 2016 and 2019

Mounir Fatmi may be one of the most popular artists in the art scene today: He has worked with us for his installation in Setouchi (Awashima island) both in 2016 and 2019. He renovated an abandoned local school, where he represented a lost time with suddenly stopped clocks, desks and chairs and other school items. The abandoned statues of school pupils were re-installed with Fatmi’s credited poles of struggles on the playground to remind the visitors and locals of the old days in school.


In our gallery show, he installed another class room.

On this occasion, he also produced works specifically for his solo show at Art Front gallery, with Arabic words cut from in stainless wheel. The title “machinery” refers to Chaplin’s Modern Times, being associated with the Arabic countries now in motion for the modernization in its true meanings. 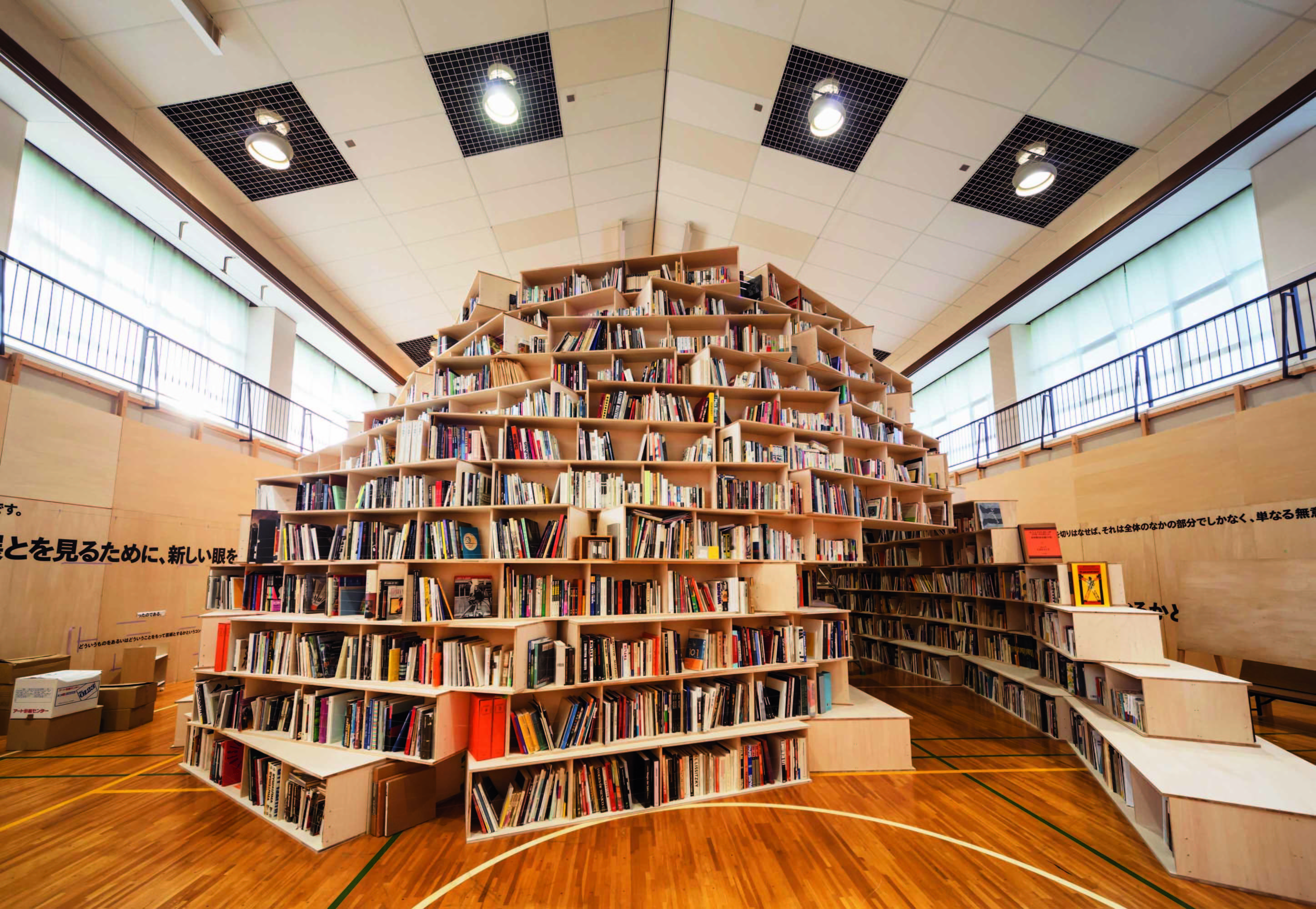 Tadashi Kawamata is one of the leading Japanese artists much known internationally and we have collaborated with him since 80’, where he started “installation” as new form of art penetrating into the architecture such as old church or other houses. In Tsumari, he tackled with an abandoned school, where he established an art archive with books donated by Yusuke Nakahara, late art critic.

The installation view of Tadashi Kawamata’s solo exhibition: Starting Over, Under Construction at Art Front gallery, 2017

In Summer 2017, Kawamata created an installation on the roof top of Hillside Terrace in the midst of Tokyo which houses our gallery. 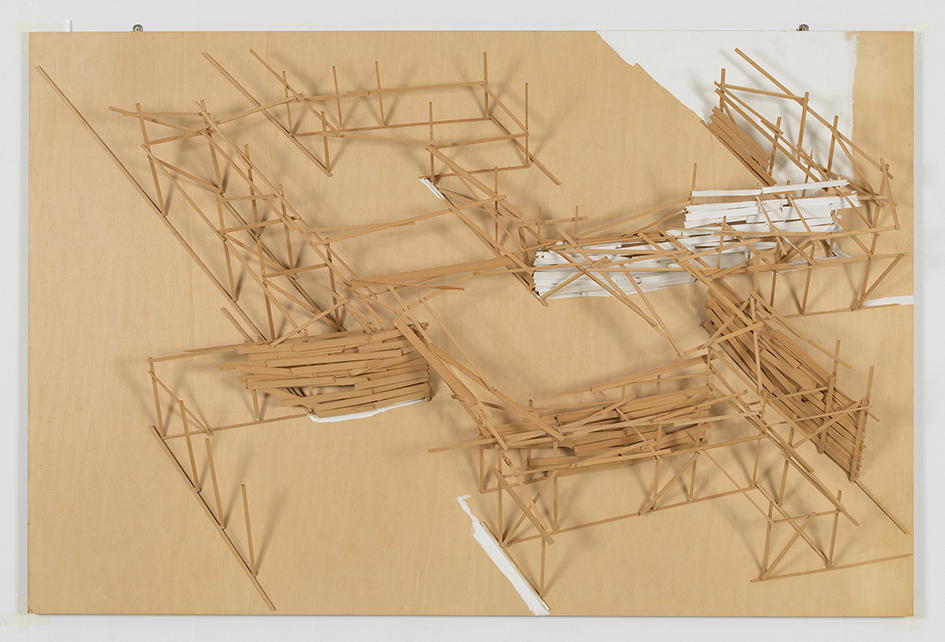 We have many works available from him especially early maquette, which were created for his projects in USA, Japan, Belgium, France, UK and others.