Art Front Gallery is pleased to announce a solo exhibition of three-dimensional works by Michiko Nakatani, who has attracted much attention for her public artworks at Marunouchi Street Gallery and Toranomon Station on the Ginza Line.

The two exhibition rooms at Art Front Gallery will be used to present the world of Nakatani's works, which show the contrast of convexity and concavity.
In the first room, Michiko Nakatani will create a three-dimensional sculpture of a large boat, her latest work. This new sculpture will be presented. The second room will be a gallery version of "Sukuu, Sukuu, Sukuu" which was presented at the Okunoto International Art Festival in 2021. 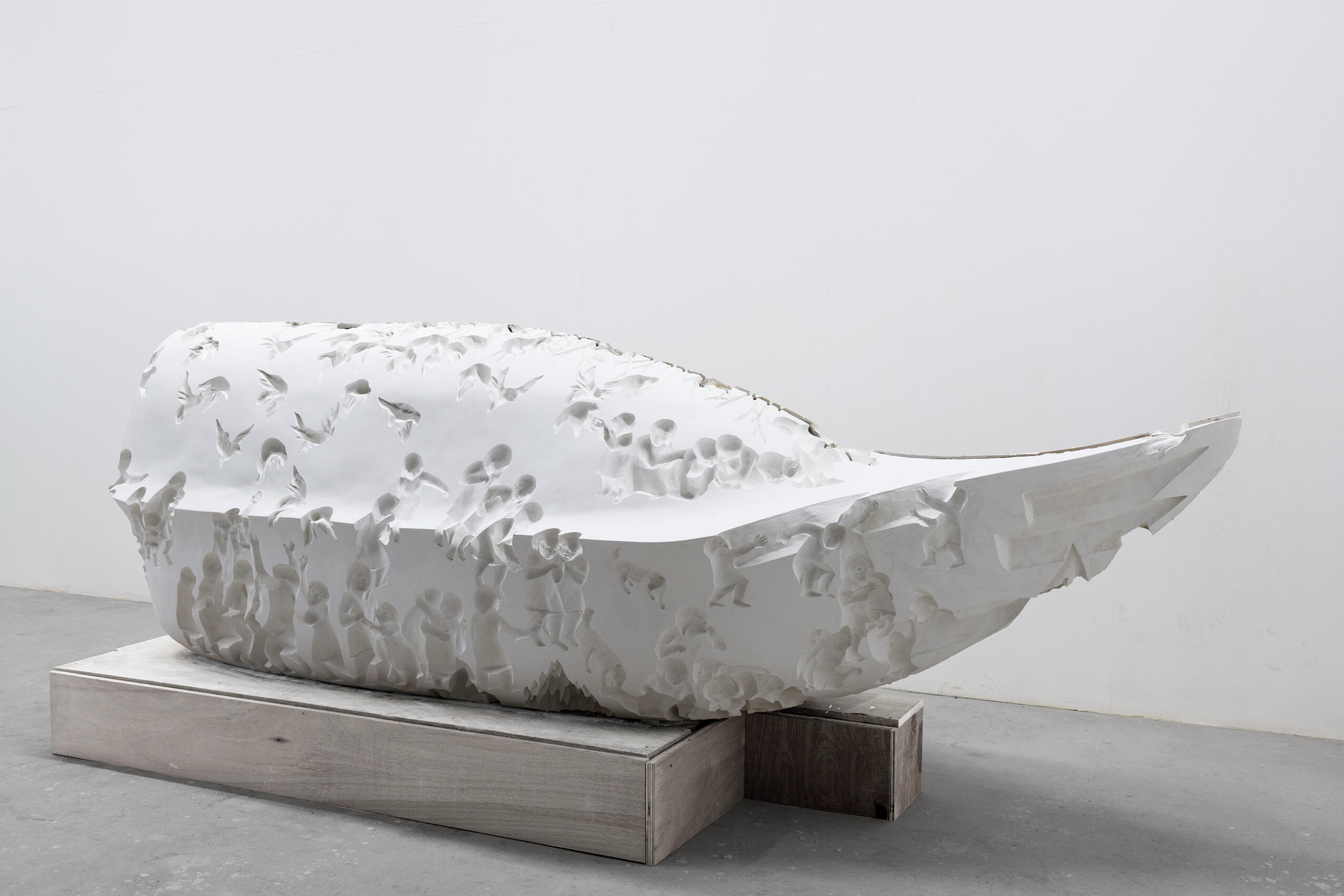 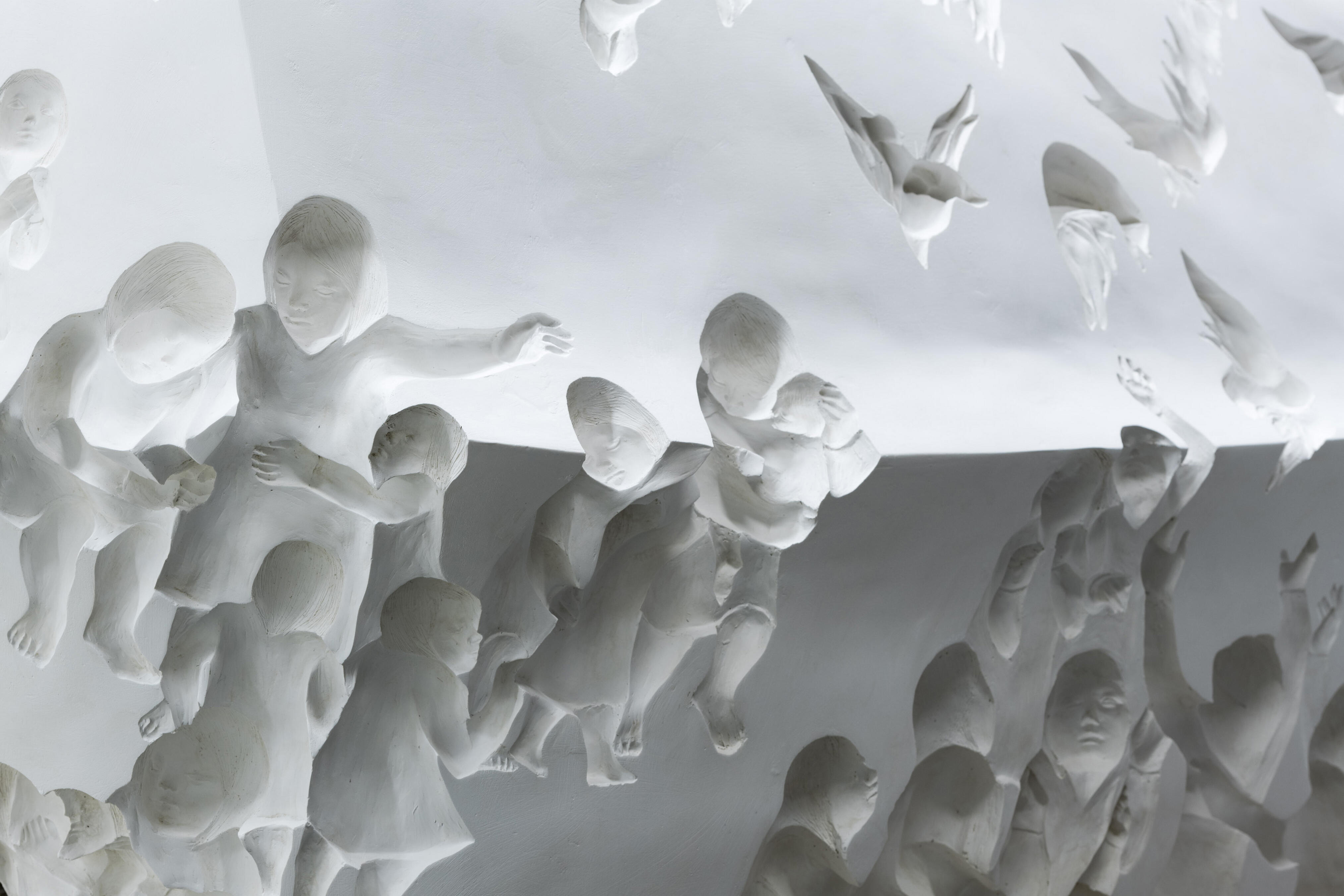 Sculptors—artists who create sculptures—act, in a way, as a kind of medium that alerts us to things whose presence we might never notice otherwise, and in this regard Michiko Nakatani is a sculptor par excellence.

Nakatani’s most prominent sculpturing technique involves creating bas-relief figures using clay, covering them with plaster, and then pouring resin into these concave molds. The resulting works are often lined by a rectangular shape, as if framed like a painting, while the image (the sculpture itself) follows our eye-line and changes direction as we move our position. Her works poetically capture absence and presence, as well as the gaps in between. In recent years, Nakatani has further developed this technique to increase its expressive potential: she may apply resin only to parts of the plaster molds, as if covering her creations with skin, or decide to use the concave plaster mold as the final artwork without adding resin at all, or use colored resin for her works, making it seem as if they come from a world of perpetual nightfall.

The works “Sukuu, Sukuu, Sukuu” and “Boat of Presence and Absence” (a new work created especially for this exhibition) are results of Nakatani’s continuing innovation and represent a certain turning point that allows us a glimpse at the future.
“Boat of Presence and Absence” is an inverted sculptural work made using molds from a 2014-15 series of works depicting a large boat assembled from human figures, smaller boats and trees. Rather than pouring resin into the mold, Nakatani applied paint to its concave shape. While the original work consisted of real, substantial figures connecting to create the contours of a larger boat (the “mothership”), in this work it is imaginary, absent shapes nestling in the boat, covering its silhouette as if trying to hide it. With the “mothership” standing out slightly from the plaster, it appears as if, only for a brief moment, it has been released from the shackles of gravity by a single wave rushing over the otherwise quiet surface of water.

“Sukuu, Sukuu, Sukuu” depicts numerous pairs of hands scooping water, modeled after people living in the city of Suzu in Ishikawa Prefecture. Each of the hand sculptures is attached to its own slightly concave display stand. The sculptures themselves are inverse. What seems like the palm of the hand is in reality its back. The hands themselves are lost, and yet we find ourselves mentally projecting water into the transparent resin that covers these absent shapes. Together with the way in which these sculptures are presented, making it seem as if the ground has sunk under these objects, Nakatani confronts us with presence where we must expect absence.

Though these two works seem an unlikely pair, ultimately I believe that Nakatani chose this wide amplitude of difference to express that a sculpture’s coming-into-existence is premised on mass and the place where the mass stands. The real, substantial image of the boat is being erased by various imaginary figures, and hands try (and succeed) to scoop up water in spite of their non-presence. And yet, even though Nakatani applied paint and resin as if she wants these masses to continue their existence as sculptures, these works have only a bare hint of their sculpture-ness to them.
Ironically, both the boat rising from the plaster and the absent hands disappearing into the ground are sculptures that have lost their substance yet continue to hint at their mass. All that is ever visible is surface, no matter the mass involved. In these works, Nakatani explores for herself how sculptures can exist in the very moment of their own disappearance, without taking material, support or attachments as given.

Finally, these inverted, lost figures must contain within them, by their very nature, the entirety of the world. Each of Michiko Nakatani’s sculptures encompasses her other works within them, and we too, all of us, are living within her works.