We present interview with Masatake Kozaki about his current exhibit "MUGEN" at Art Front Gallery. 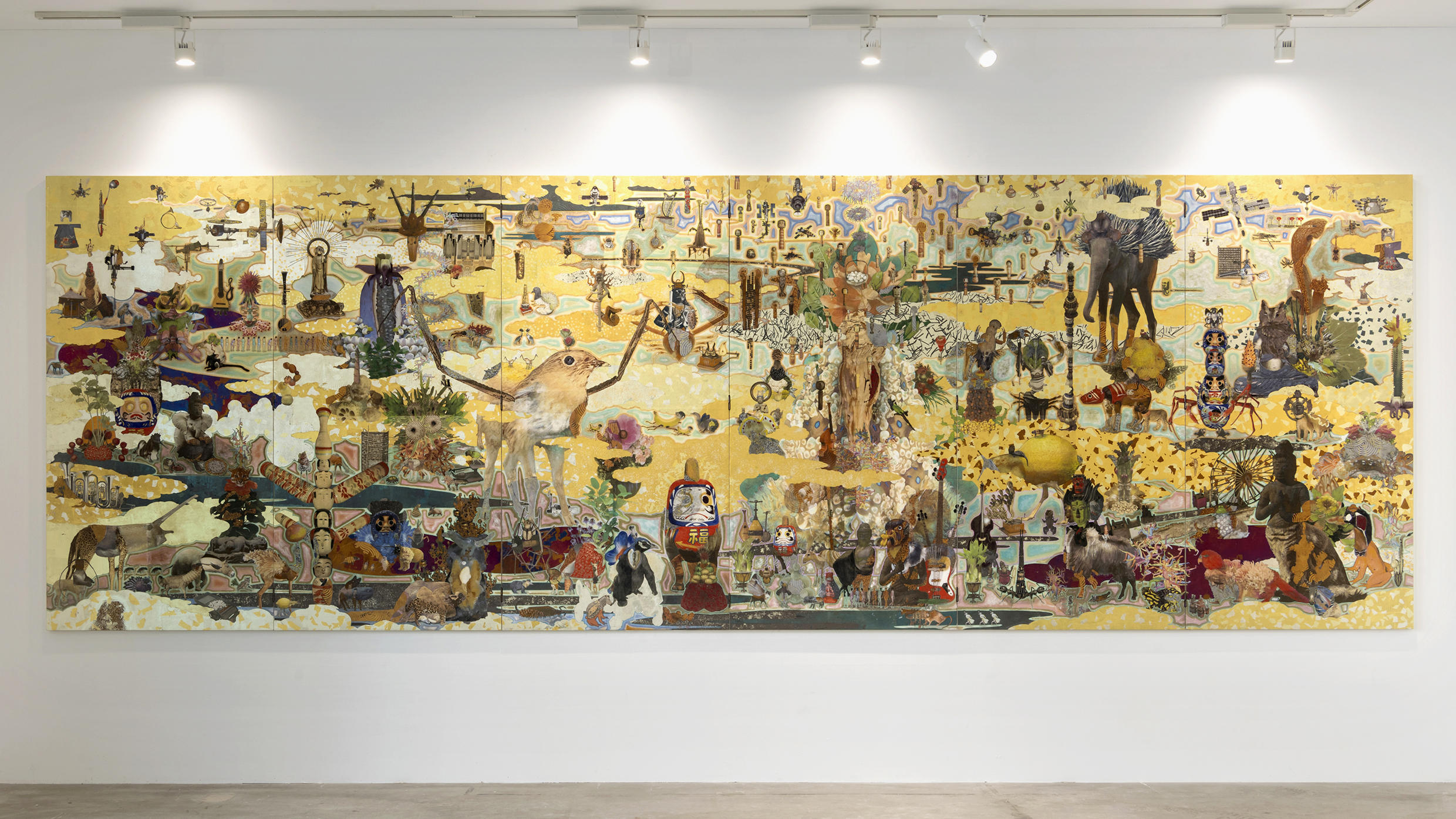 Could you explain the screen paintings on view which were created in a couple years ago?
Coming to Yamagata, I felt that we still have something interesting and special in Tohoku area despite the disaster of 2011, such as Buddhism integrated with mountain worship or other local culture. I was born in Fukushima, so I myself a Tohoku people, however, I “re-discovered” motifs travelling in Yamagata, applying them into my work. Not only the documentary resources but also experience itself in the grand nature offered me precious landscape, which I could integrate with my longstanding subject of Togen or utopian paradise in Chinese literature. In this work of TOUGEN-TOHOKU, you can trace the routes of pilgrimage in the picture plane as well as Osawa-butsu, installed in the course of Mt. Yudono together with Kokeshi doll or Daruma, all these local motifs of Tohoku. 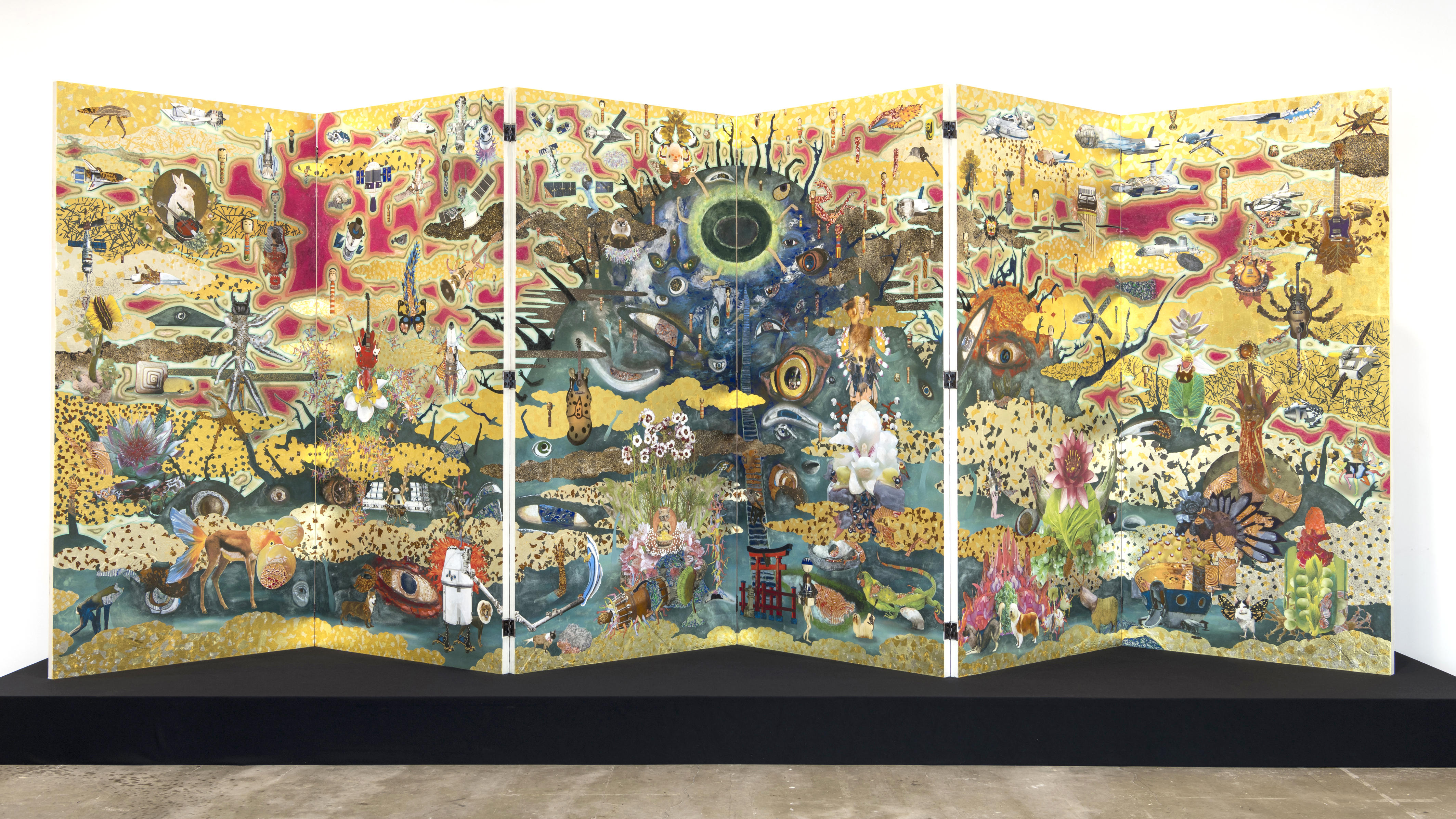 On the screen painting "TOUGEN – YAMA"
I was surprised to find a new type of mountain, different from that of my hometown. Triangular shape of mountain in folklore stories exists indeed, inspiring us a symbolic and mythical image of mountain which may have been created by “alien” (laugh). These impressive eyes are jade from those of Osawa-butsu, mixture of nature with worship. In our present world, object of worship can also be space ship or guitar, symbolic motifs of technology or even music, and I am fascinated by these motifs to develop my artistic presentation.

It appears me that Tohoku area contains many hybrid elements: Buddhism imported from China has absorbed various factors going up to North in Tohoku. This area is very generous in accepting many cultures, which I find something common with my Chimera, hybrid creatures themselves. 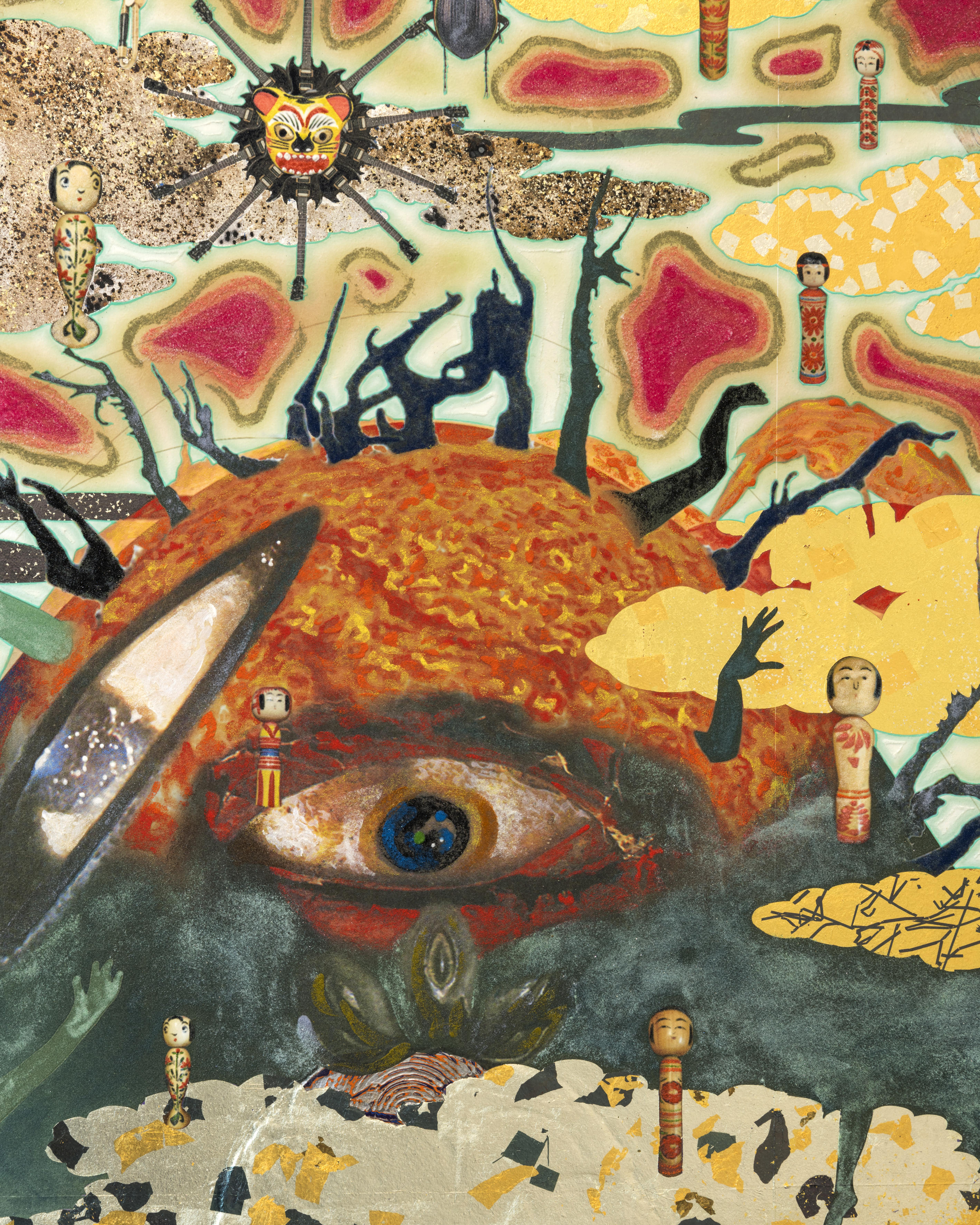 Why do you explore the form of screen paintings?

As you know, the lion in traditional Japanese painting seem facing toward the viewer. I am interested in Rakuchu Rakugai (Landscape in and out of the city of Kyoto) screen paintings with bird’s eye, so I became to explore the image closing up the details, and naturally came to use this format of screens where I could express myself freely as much as possible. 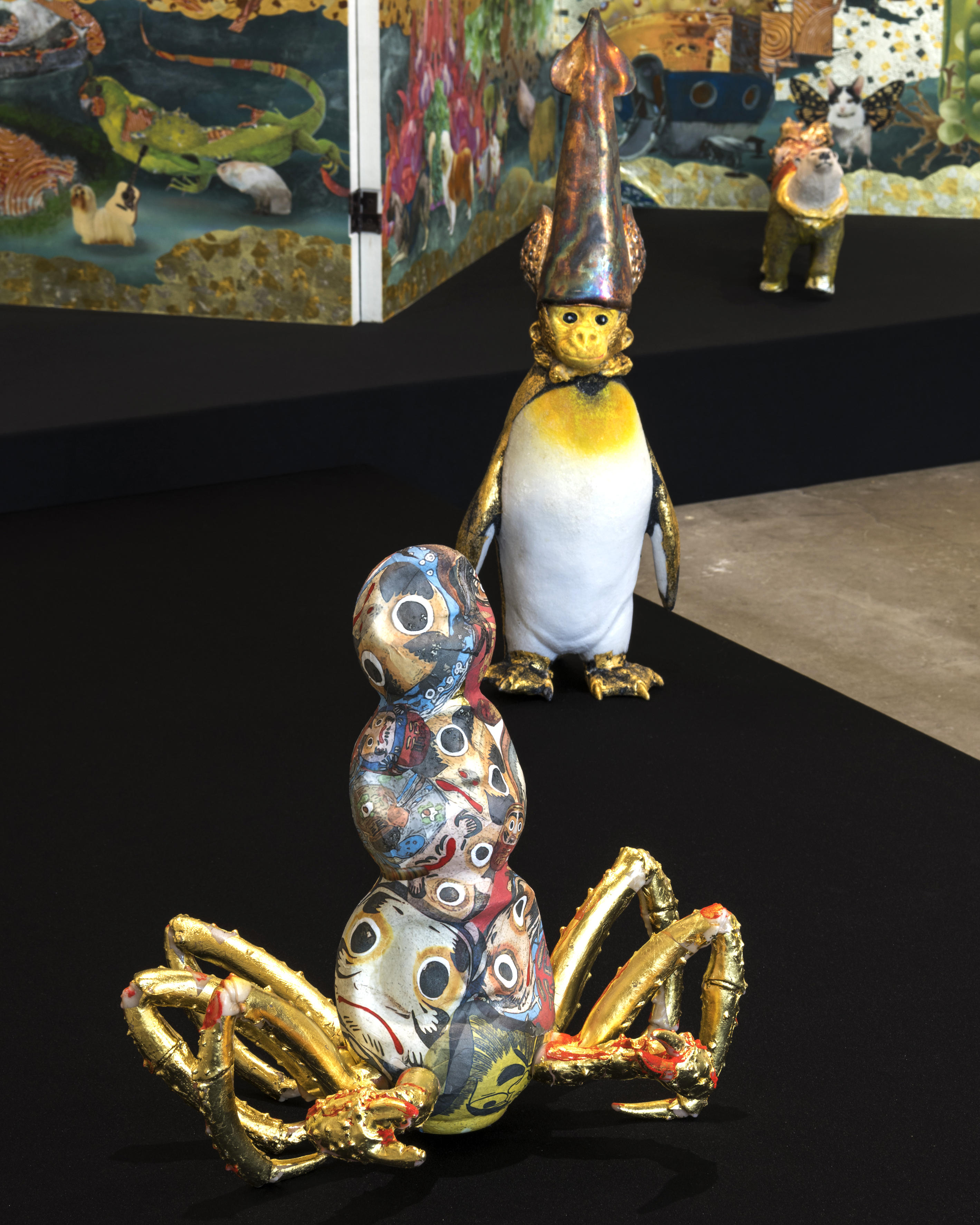 Hybrid creatures in three-dimension are new this time. Are they in this extended line?

While existent Osawa-butsu are re-structured on the picture plan in two-dimensional works, I wondered if I could showcase this charm in three-dimensional as well. Since dolls or Daruma figure had already been descripted in the paintings, their image was already in form, leading to easy and quick birth of three-dimensional version. Image of squid was in my repertory from early days, which was embodied first among other creatures. 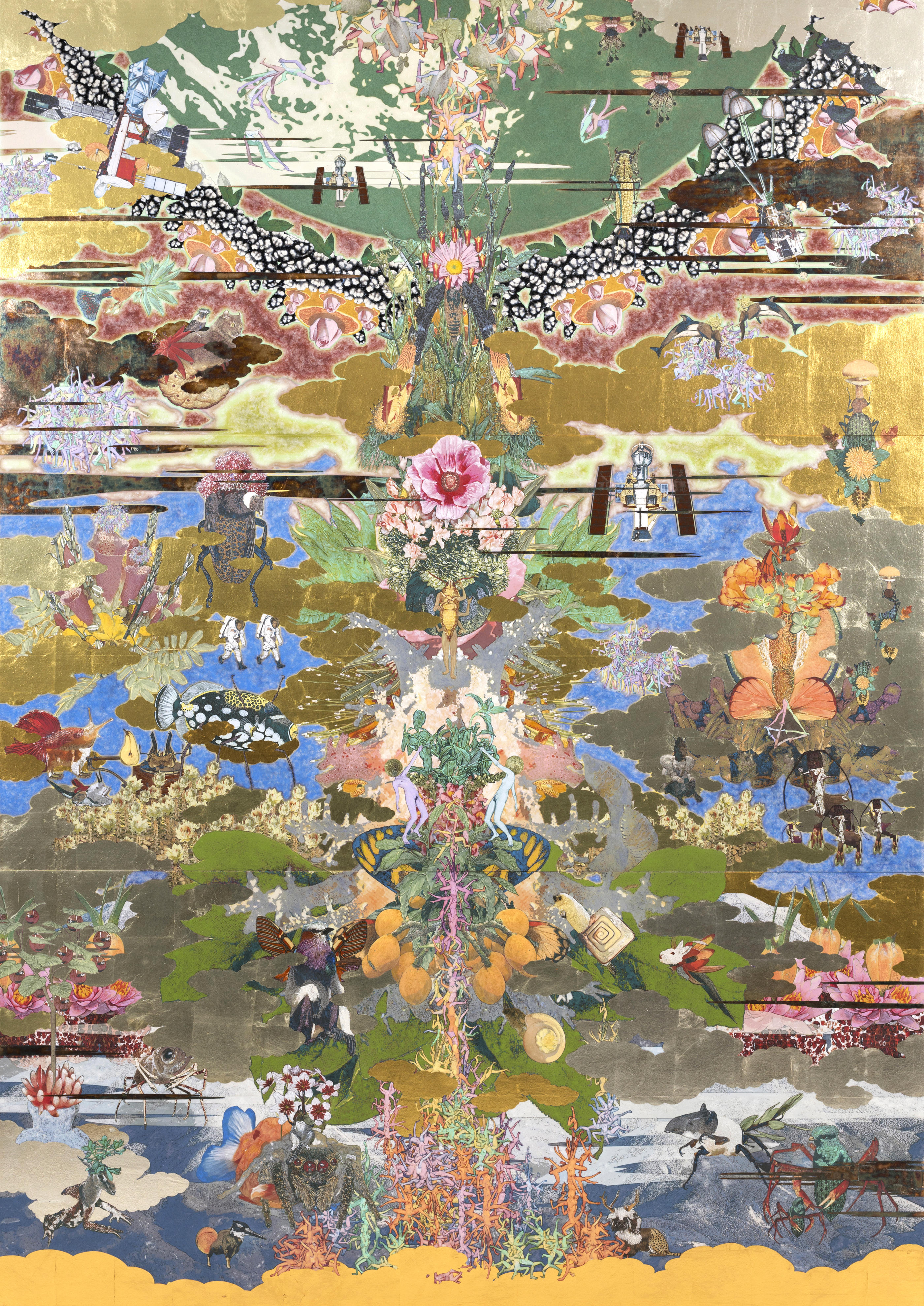 MUGEN -Tree of Life is the work you prepared for this show.
I asked myself what was the theme or subject through my thirteen years in Yamagata after moving. Among hybrid motifs, Tree of Life has been symbolic one that various painters in the history visualized in this respective way such as Hieronymus Bosch or others, applying plants into the ground. Considering COVID-19, I am depicting this world which is going up in something symbolic. Usually I depict hybrid between plants, but it also can be applied to space ships or other symbolic image of tower such as that of babel which is still painted as before. To focus on the central motifs, I refrained from adding decorative elements on the gold leaf. 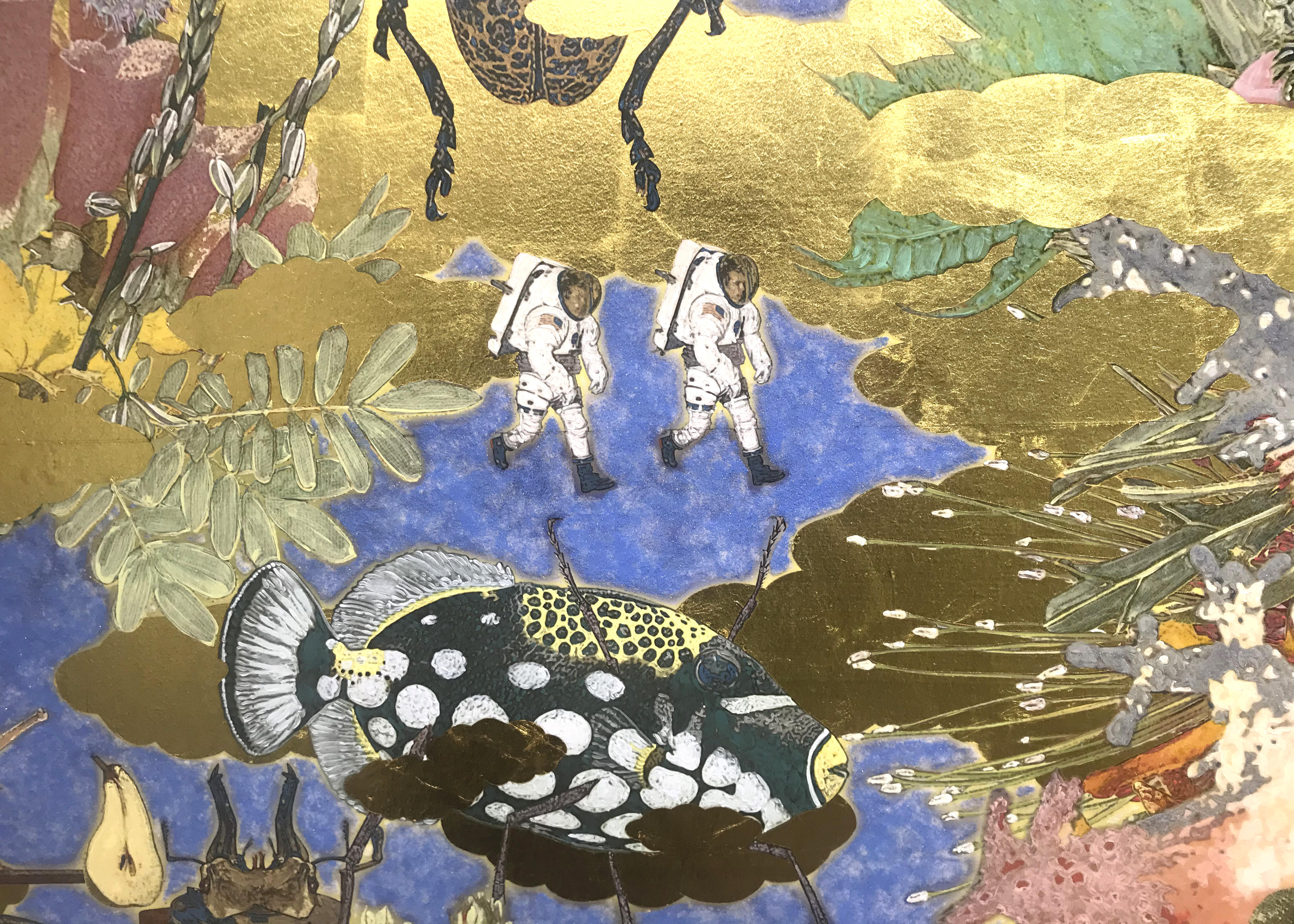 These men appearing in Yamabushi of today, are they astronauts?
May be this painting might not a representation of the earth, and astronauts happens to be here on this planet.

If so, your view will be slightly different from the world of TOUGEN so far?
So far, my image of TOUGEN was derived from ideal paradise described in the poem by Tao Yuan Ming in Eastern Jin, so something in the dream in Eastern world. This time, however, I titled MUGEN hoping that ephemerality of present world can be visualized with present interpretation or iconographical image. Through alphabets of MUGWN, I would like to express not only “ephemeral” but also “infinite”, both can be conveyed by use of this ambivalent word of MUGEN. Fantastic world is now very much in vague due to many things, but I would try to depict what is beyond the border of what is ephemeral. It leads to a futuristic world where I can only visualize the future in this limited way. 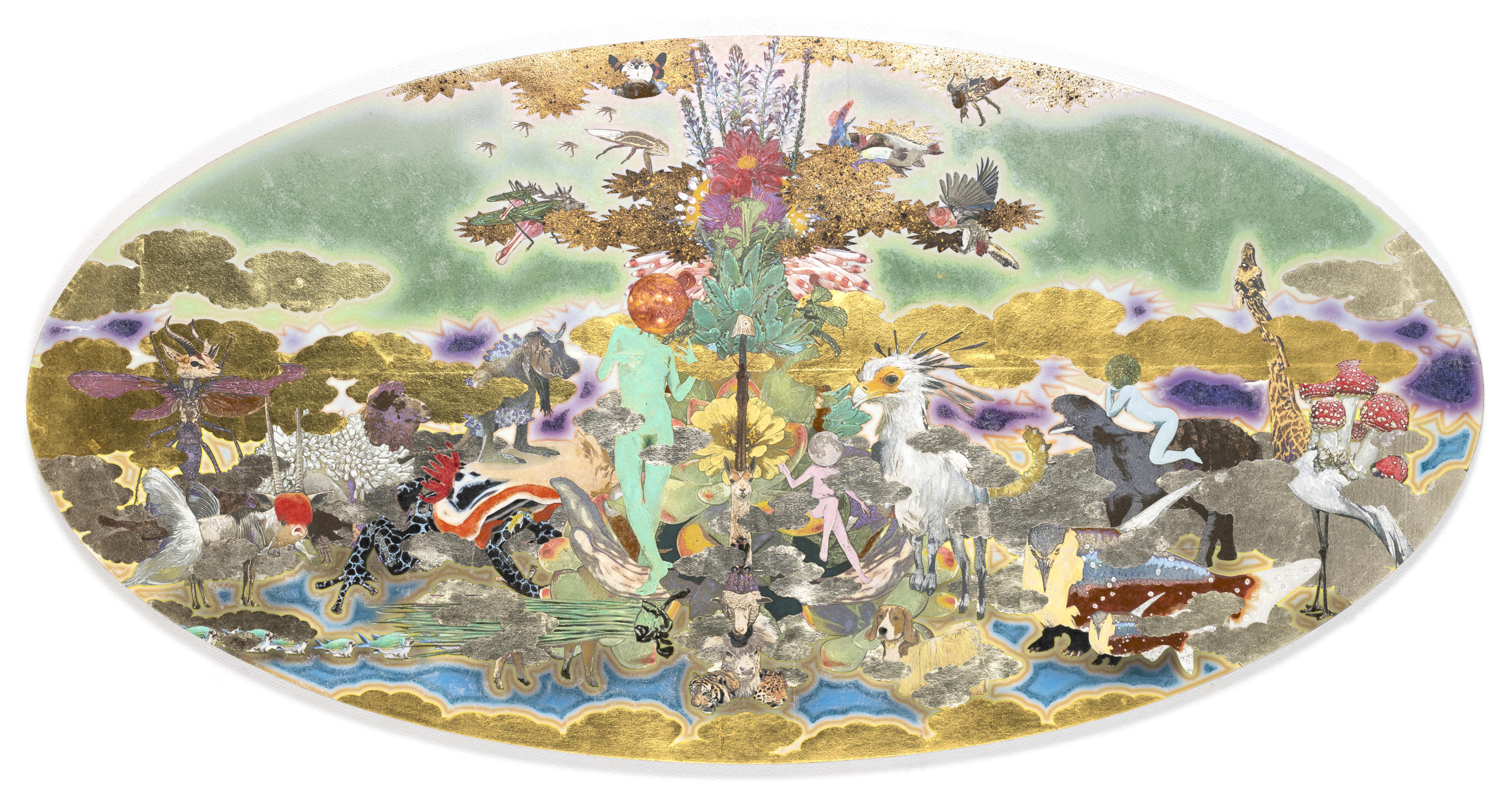 Do you have something to tell about the oval and circle works, new challenge?
I found myself limiting to the cliché of showing the motifs in a limited vision, just like on TV or in the movies. Rather, I chose these forms of oval and circle as a form without angles to look into the inside. In ovals I was faced to a gap between the topics I usually tackle with such as composition or layer-buildings, and that is why I could realize this new challenge. For example, clouds in gold leaf has silhouette in round shape or so, and I tried to apply these silhouettes thinking of how they will appear in these round formats without angles. 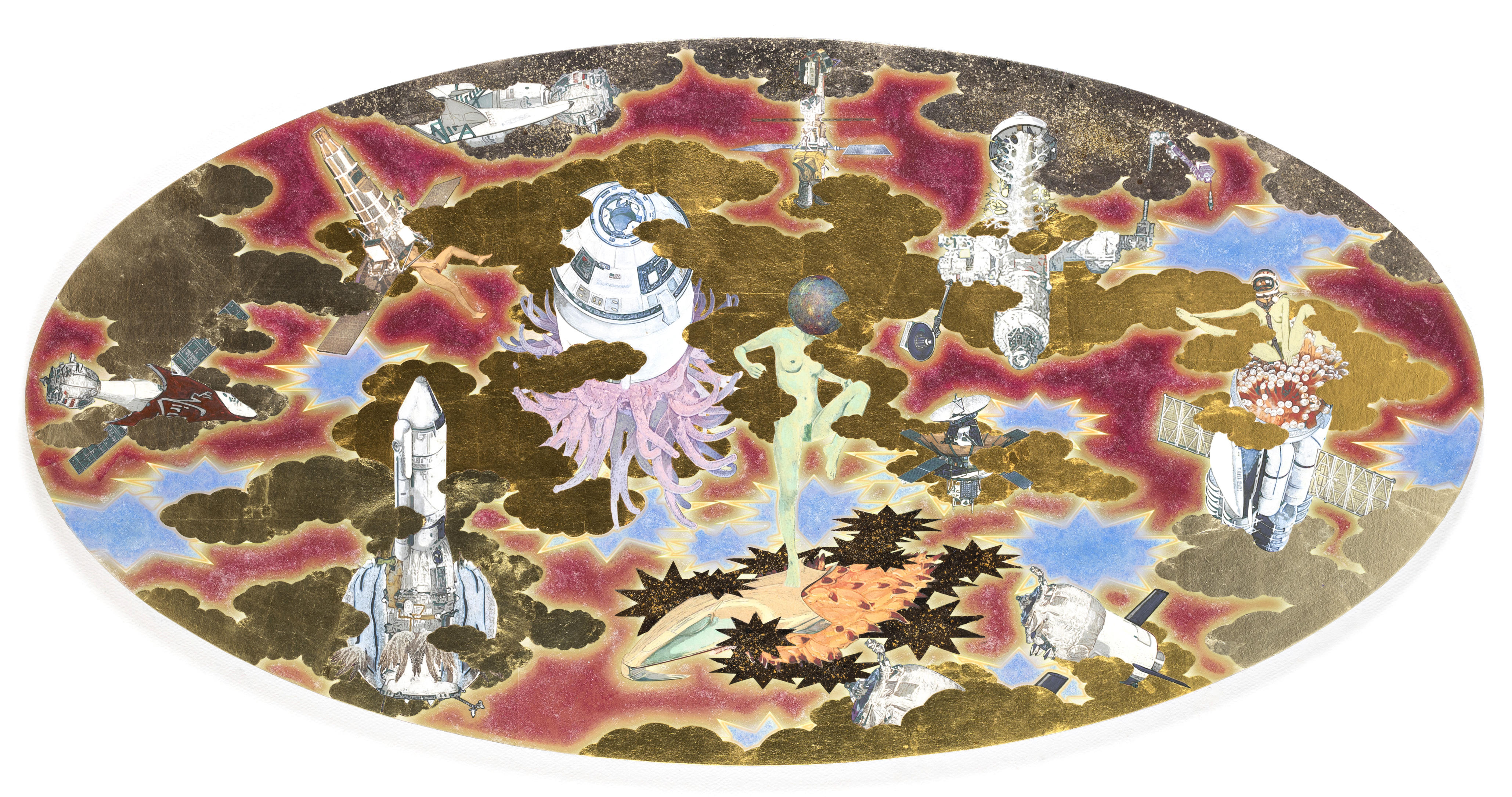 Did you work for this exhibit after last April?
I was working on the drawing images in February or March when the corona pandemic was starting.

Has the quarantine life affected your work since then?
As the present situation becoming more serious without foreseeing the future, I asked myself if I should take action in order to altering the very situation. In fact, I thought it will be nice if I could draw a global image common among the people from broader viewpoint than before. 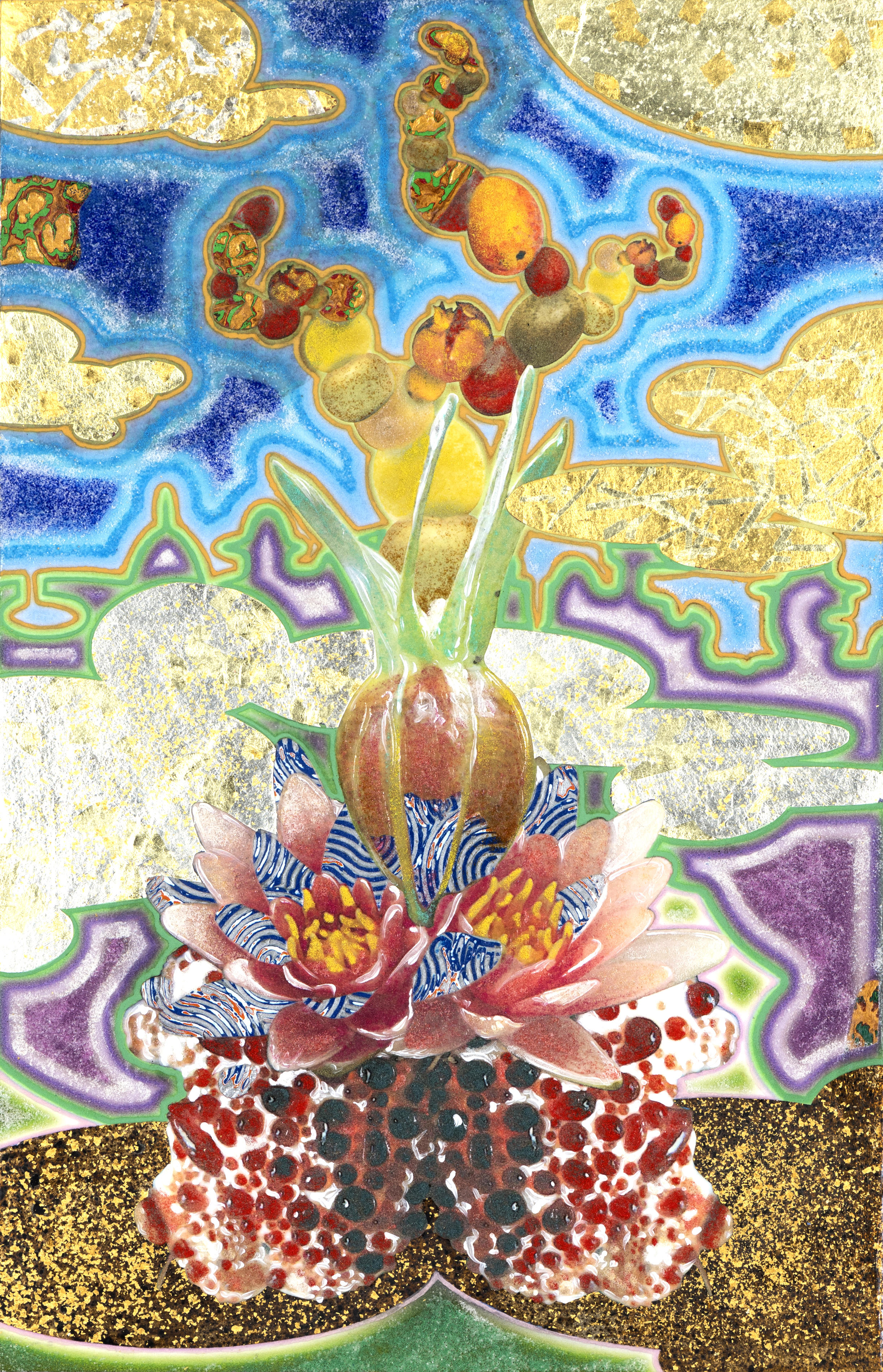 Do the plants and flowers have specific connotation in your paintings?
I collect the images of the flowers all over the world without limiting their areas. Fruits or chimeras are symbols of greed, temptation or human desires. Flowers are also very charming motifs. What I keep on expressing is how human desire will be depicted in the future. Space ships or other symbolical images have been pictorial motifs since ancient periods to imagine what would come in next period. However, if you repeat the exotic hybrid action one after another, then you will have a nihilating image, which is to me an interesting but difficult story. Could you explain the musical instrument in the work?
In middle age, music hell existed, housing the people suffering from instruments. They are indeed have symbolic forms and have charm to attract the people. Some guitars has a organic shape such as beetle, and I am very much interested in linking them with chimera. For example, the combination of kokeshi and Western instruments or combination of folklore music instruments with crafts make me imagine what kind of “sound” will come. 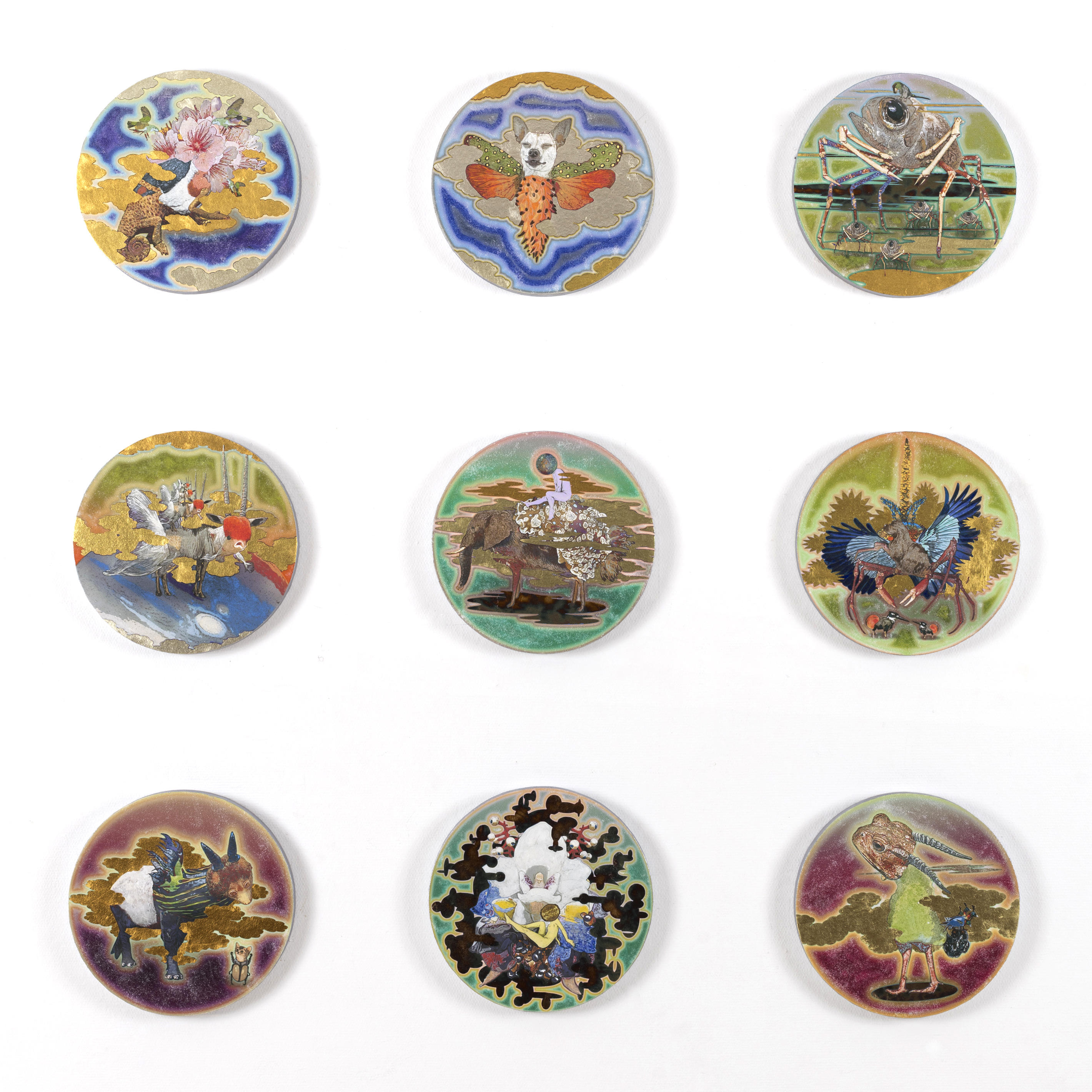 How do you come up with ideas of chimera with such wide variation?
It is rather by coincidence. If you reflect on chimera seriously, then a kind of cliché will prevent me from spontaneous matching. So I put various motifs into the pot expecting a strange encounter which is more interesting than the calculated mixture. As Surrealist artists exchanging their diaries, I was interested in my youth already in the fictional world on TV, a kind of my proto landscape, which served me a motivation for hybrid creatures. I was more influenced by the fictional motifs than the real animals, since the former is a kind of combined image that children all likes, just as Pokemon, for example.
These small circle works are what we call the series “Chimera Portraits.” Some motifs may seem imposing others more shy, and I think that portraits reflect the character of the figure. If ordinary chimeras in the mythology powering up by mixture, my chimeras are rather less powerful or just outcome of encounter by chance. While I seriously think of the meaning of living itself, I also like the casual attitude toward the painting just being indifferent of these important questions. Why these chimeras are in this mixture? I do not know but I love them since they are more interesting to me.

Could you explain the “MUGEN-landmark”?
I tried to express the critical situation due to corona pandemic through the up-side-down landmarks which is the symbols of the cities. I wondered how the new rich people living on the summit of sky-scrapers as the symbol of human desire reached through the economic growth. If the overwhelmed image of galaxy, black hole or big ban is at present situation, how will be these images issued from the present situation? The towers are standing at the mountains in snow scape. Instead of blue sky, I depicted red sky, inspired with disaster associated with contemporary image of the sky color, which I would like to pursue.