Current exhibit at Art Front Gallery is the first exhibit in our gallery of Keiji Ishida. The artist demonstrates the background of his artwork, introducing the exhibition.

Moving brushwork running.
Bodily movement or flow.
Gallery (G): I introduce you Keiji Ishida. He studied in Chelsea College in London, then acquired master degree at RCA, Royal College of Art, followed by his further studies in Germany for two years. So he had his main artistic activities overseas. Now he lives and works in Okinawa. This time, we exhibit nearly twenty pieces of art, and they are all new works.

To explain his works, as you see here, Ishida often paints figures especially children. He has been interested in British picture story books and pictorial books of the fifties, from which he borrows characters as motifs. Such various references, not only explain the nostalgic image of his paintings, but also serve as the parts for artist’s story-making of his own: he coordinates the fragments of character into his original story using these characters and sceneries. Some works may seem to be interrupted or unfinished, however, they are expressing the artist’s intention to show the living lines of drawings, sometimes appearing only in the process of the creation of painting.

Ishida (I): I am Ishida. When I started painting at the age of thirty, I had been driven by the incentive to draw anyway, but honestly, I didn’t know how to do, what to create or how to create. Now, I am following my own process of creation: I draw what I want and paint it in a way I want. In other words, “what” is for drawing and “how” is for painting. 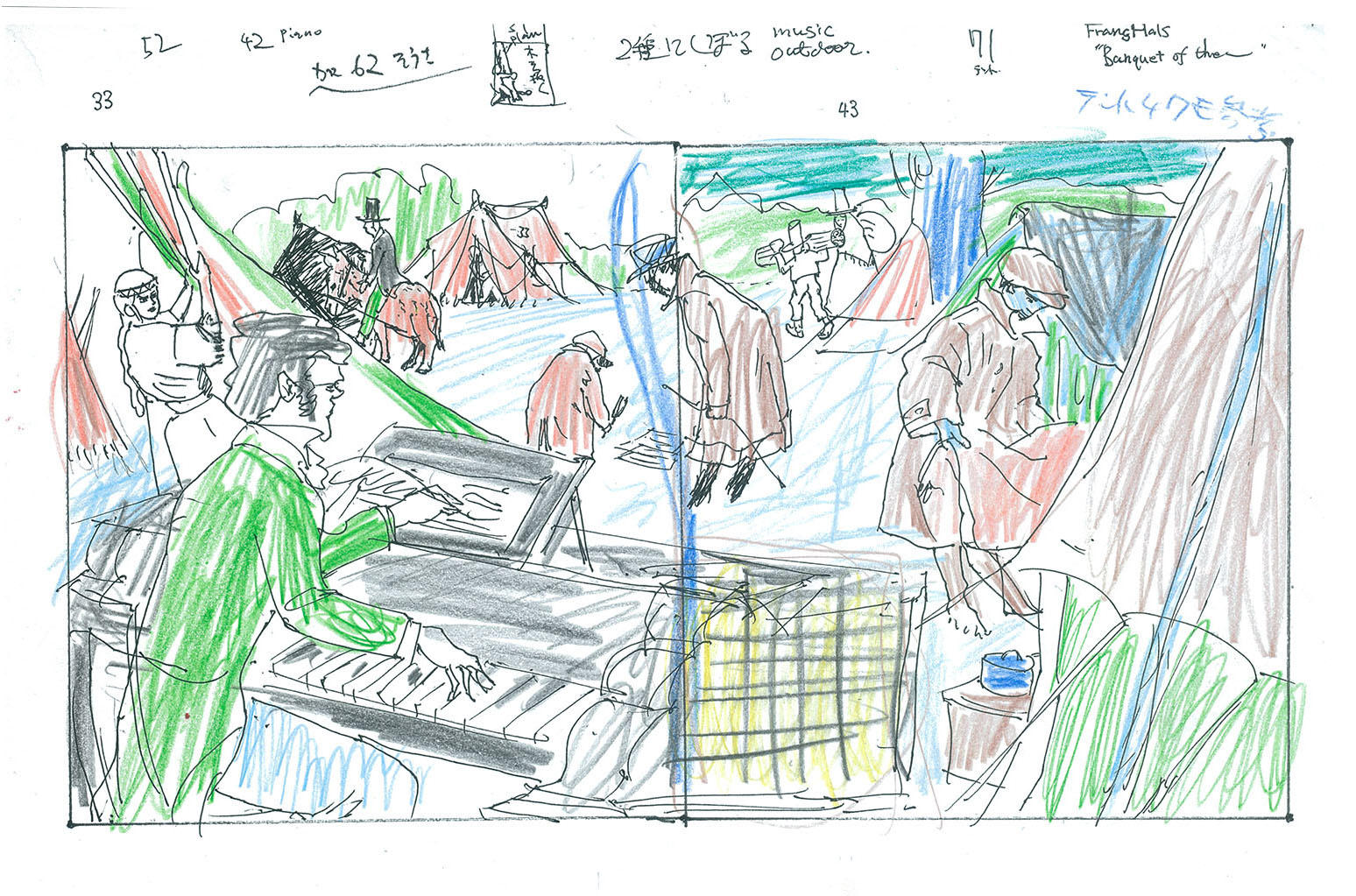 I: As you see on the display, first I draw on paper in a very relaxing way without any pressure or desire of completion of a painting. I draw freely improvising my own story, watching illustrated books and pictorial books. Relaxing, it seems to me, is a good incubation for spontaneous reflection as well as for imagination.

In the next stage of painting out of drawing, I put priority on the bodily urge or sensual desire. I consider how to put color on the picture plane, or which brushwork to leave there. If I just flesh out my drawings, then my priority would be the making sense of the total coordination or proportion within the picture, and I would like to avoid such limitation, so I am led by my own motivation of “pleasure” and “unpleasure”.
This series was produced in the course of moving brushwork running in the picture or my bodily movement or flow. The exhibition title as “FLOW” came out of this story. 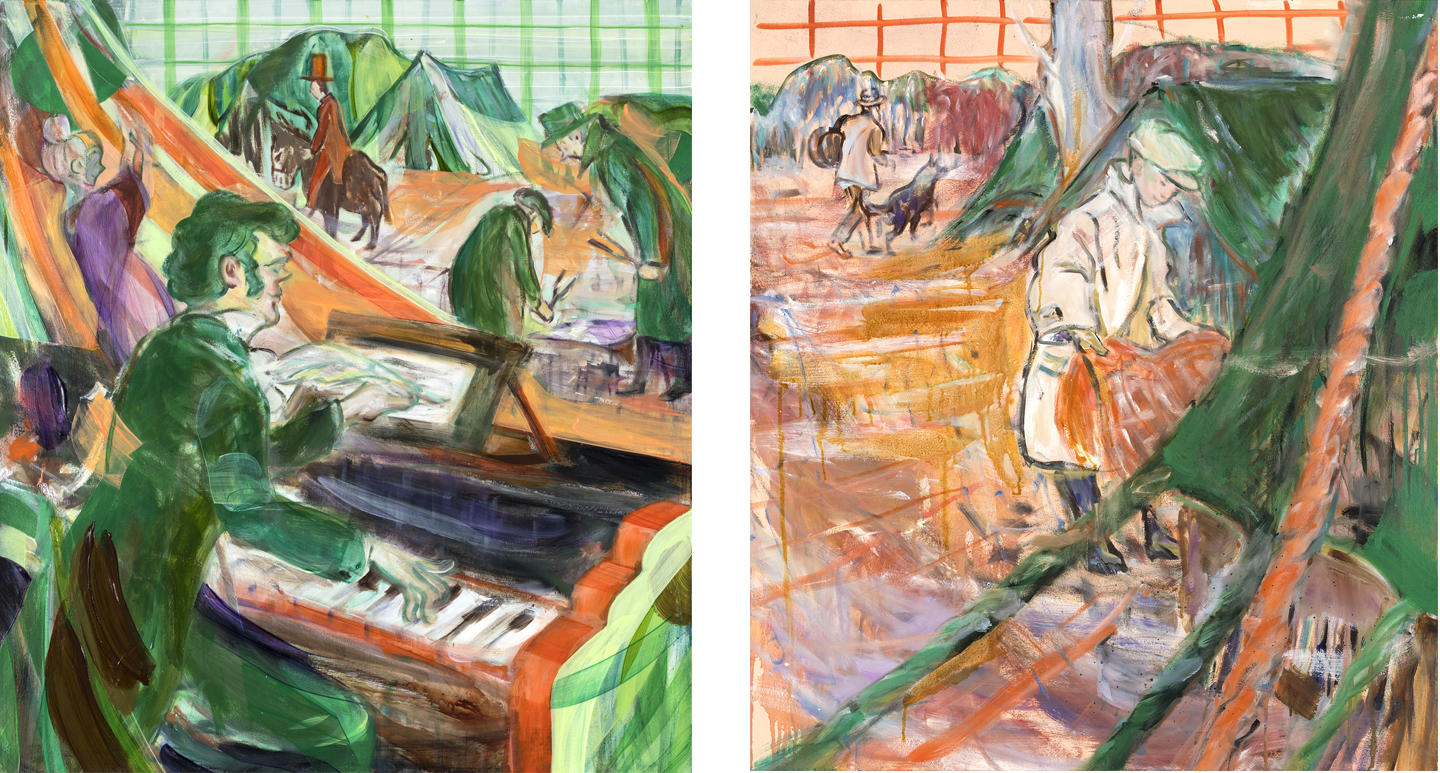 “Jump” in time that we experience on the book pages

G: Since Ishida’s paintings are narrative-oriented, gallery tried to exhibit them so that the audience can imagine freely, making their own interpretation. These four paintings, for example, are composed of two sets of pair paintings. The pairs were once divided into individual painting which were composed again into the set of four, urging to think of a new story. Two sets of paintings in diagonal position were originally in the same pair, and we are challenging to showcase how they appear in a different situation or circumstance where each painting will be re-organized.

I: As you see, the dimension of the paintings is the same in the same series. This is because I imaged the “double-page” of a book for my images. At the same time, each canvas will serve as frame of a comic, changing time and place, just as an “jump” in time that we experience on the book pages with text between illustration. 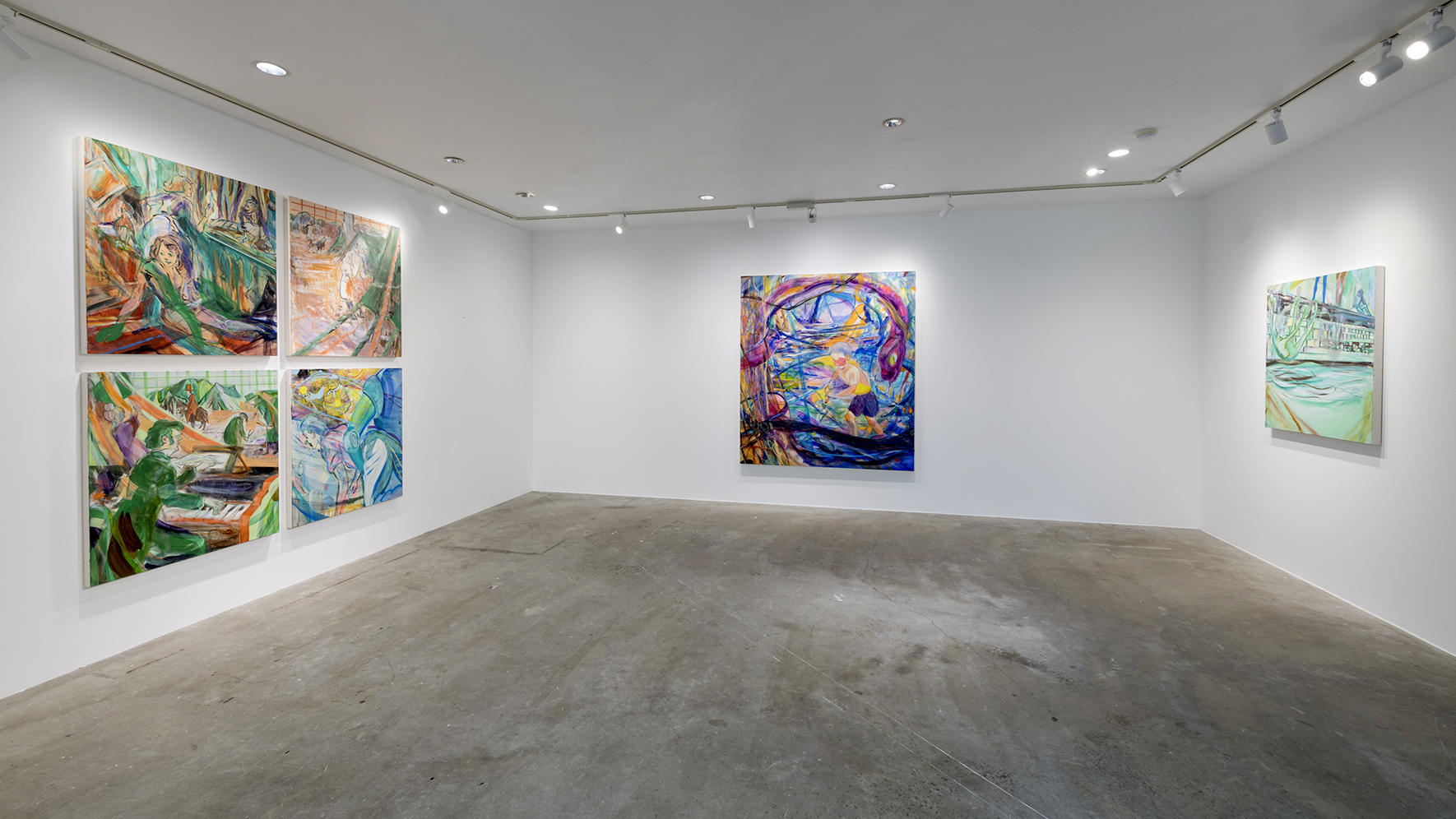 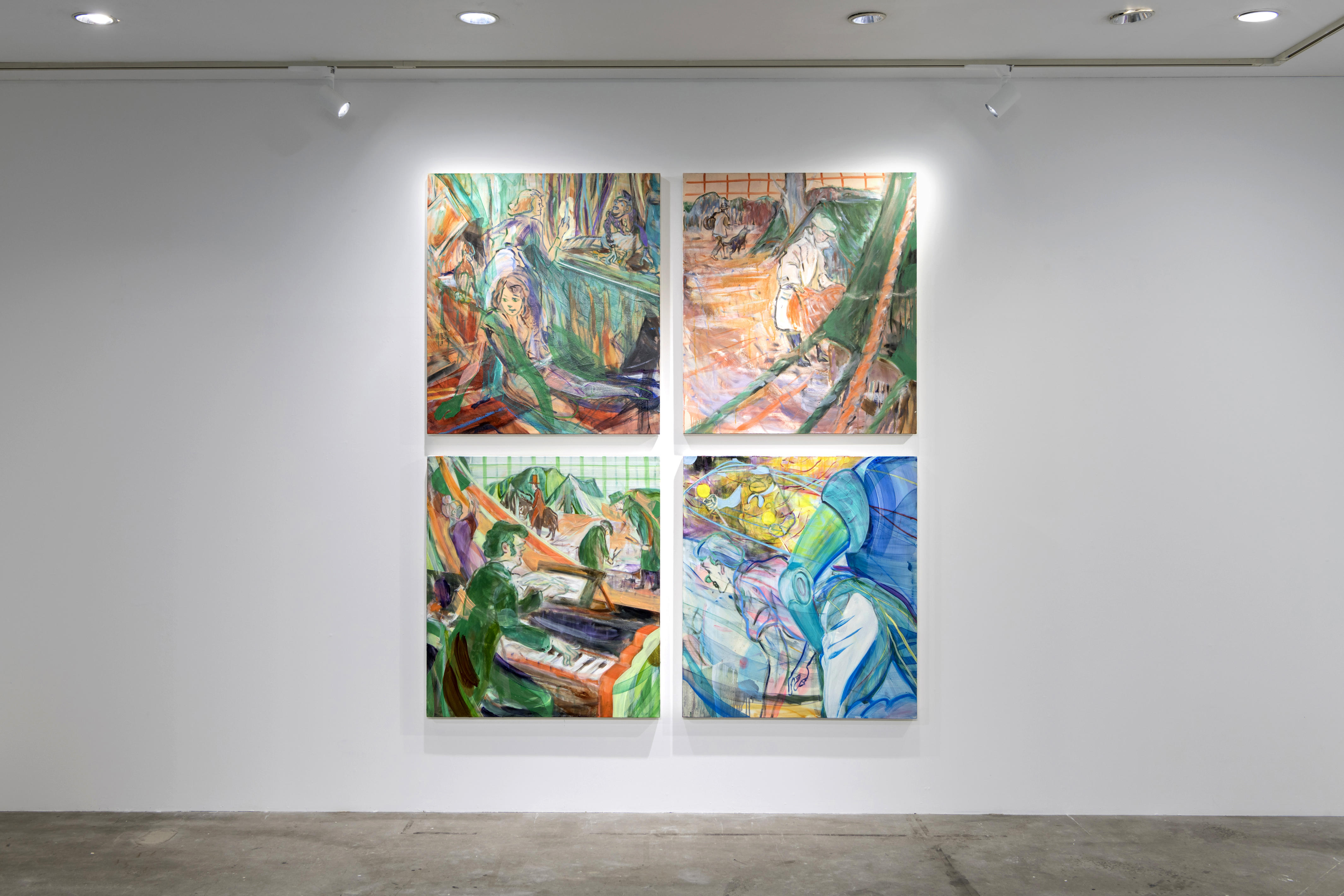 The installation view of Room 1. 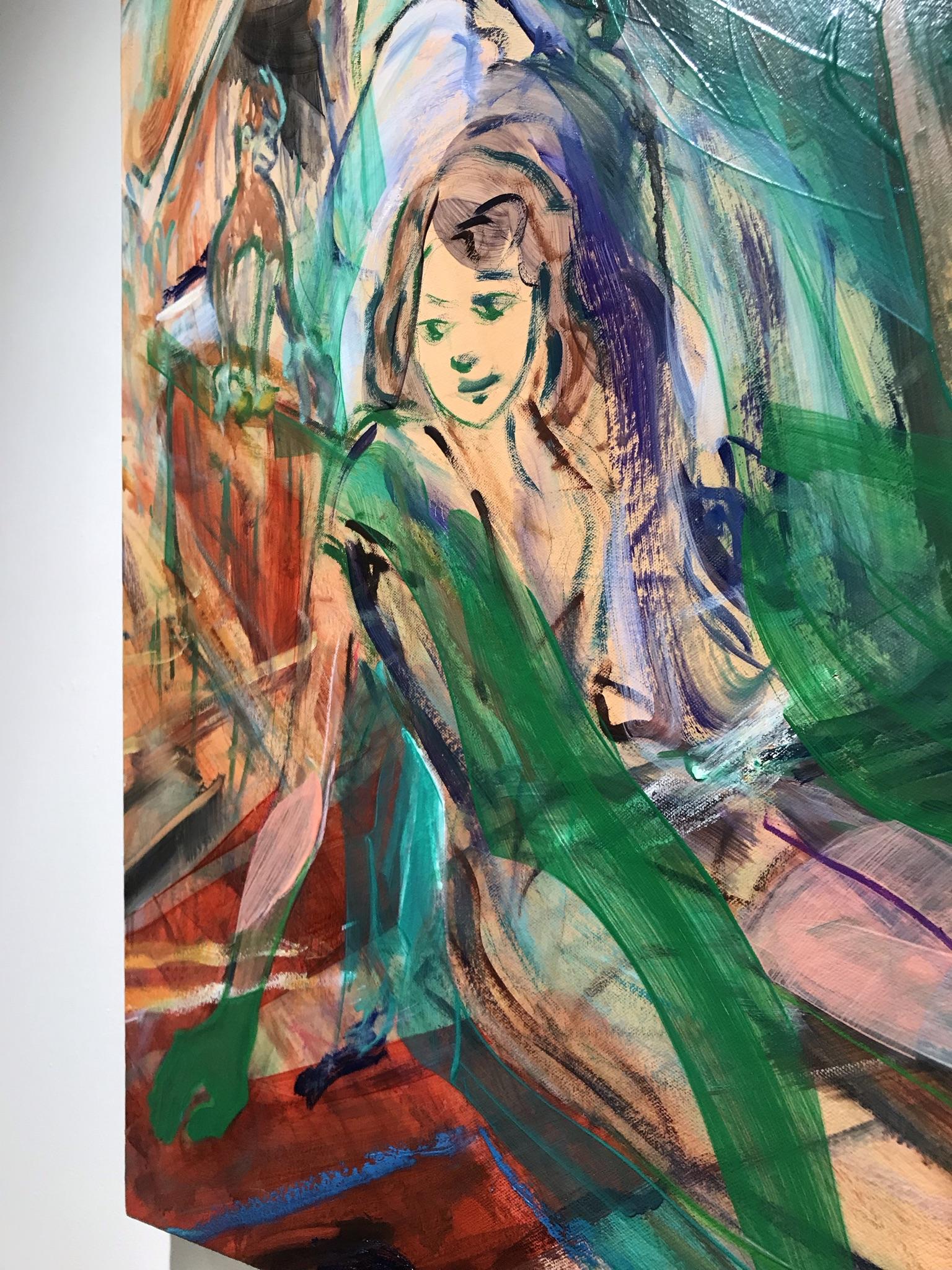 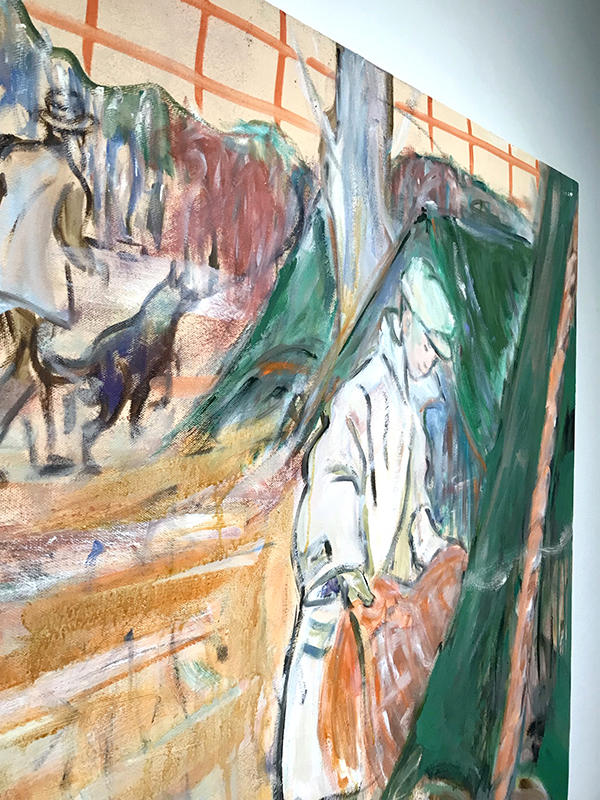 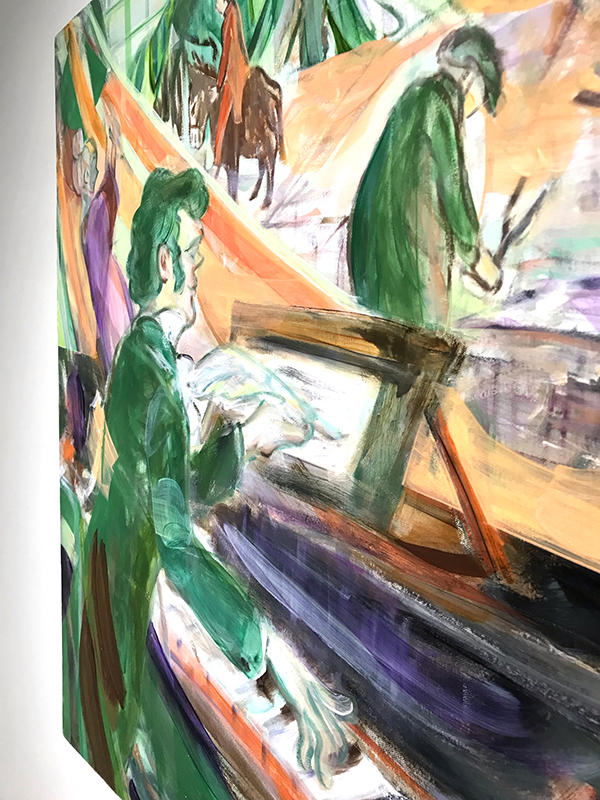 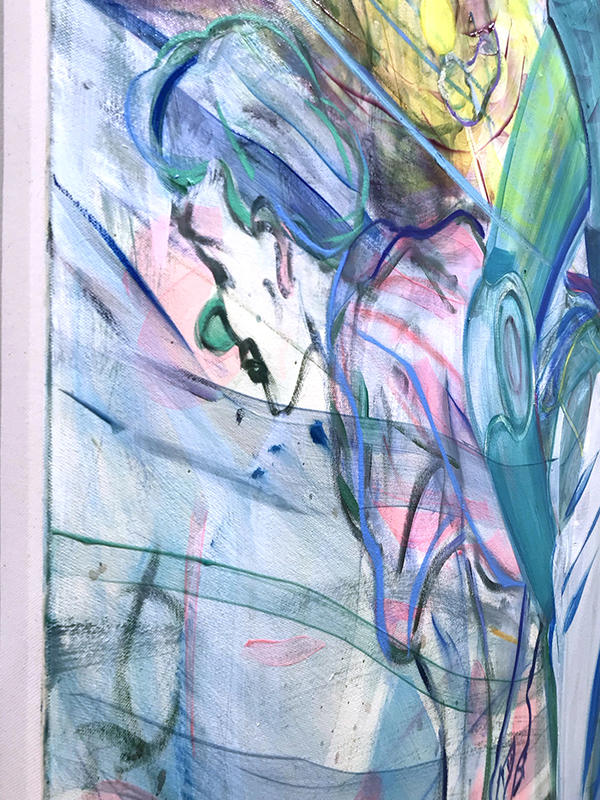 
G: In this room, too, some paintings stand themselves while others are grouped in a series. They are also narrative paintings, inviting the viewer to make their own imagination. 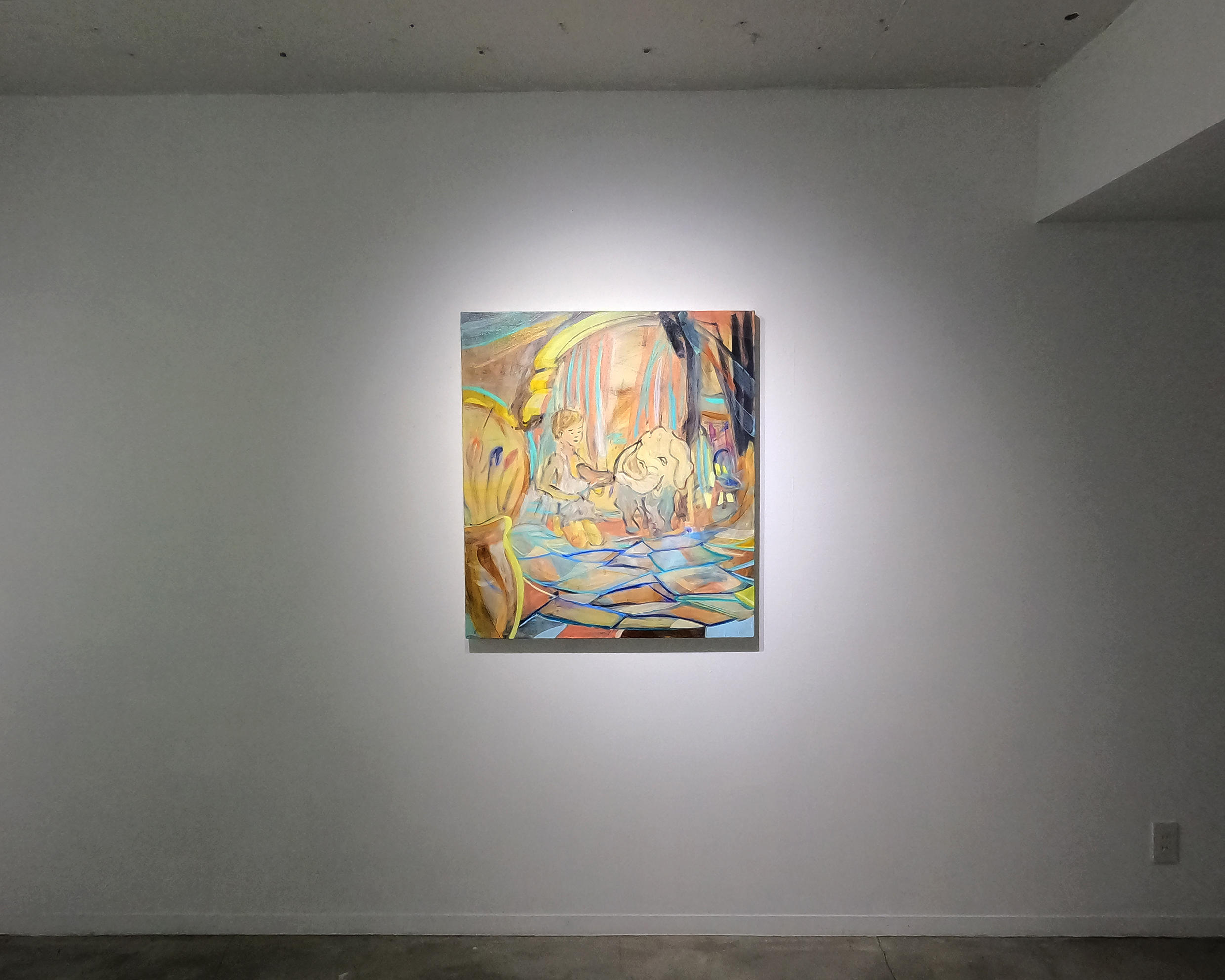 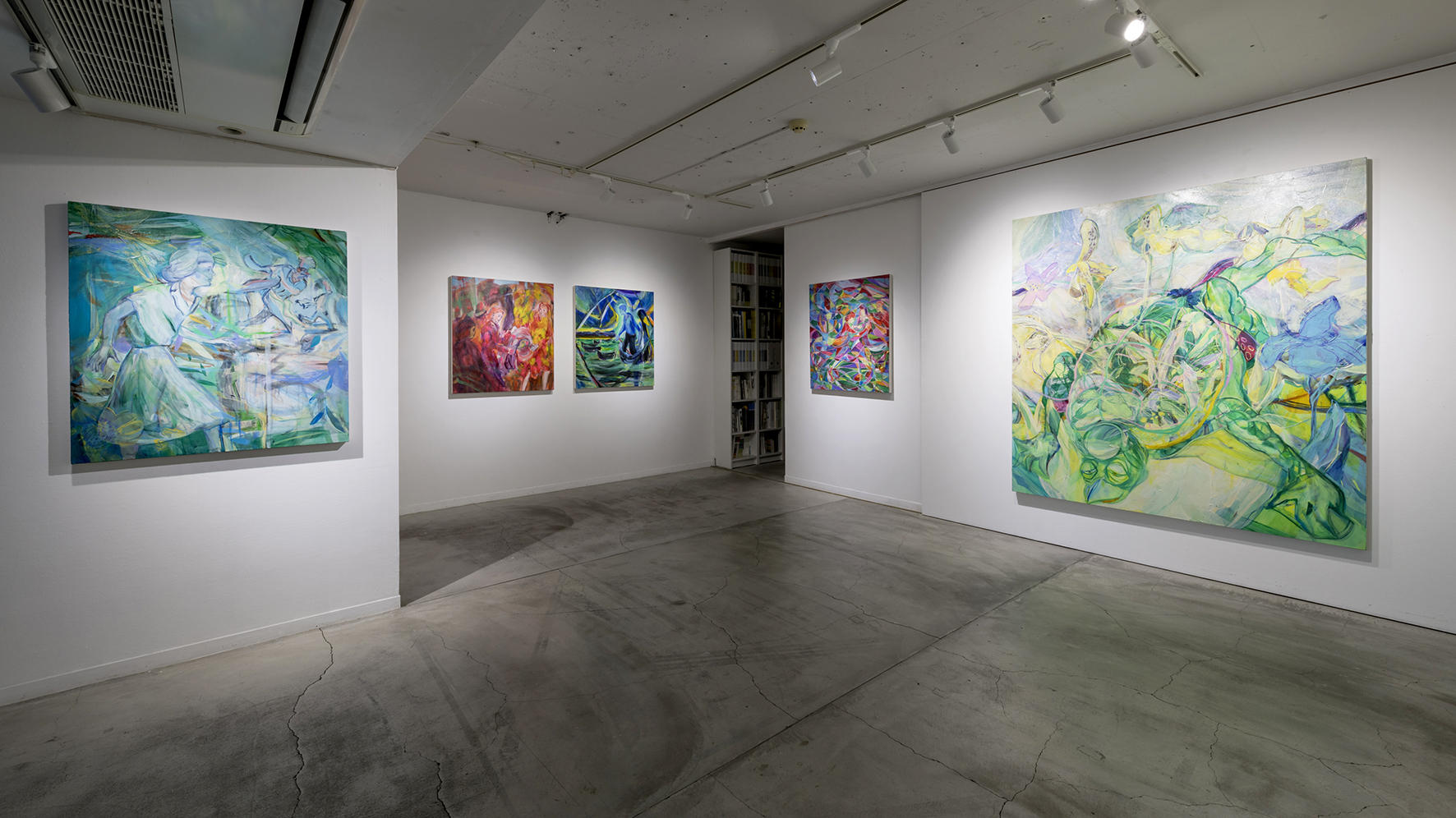 The installation view of Room 2. 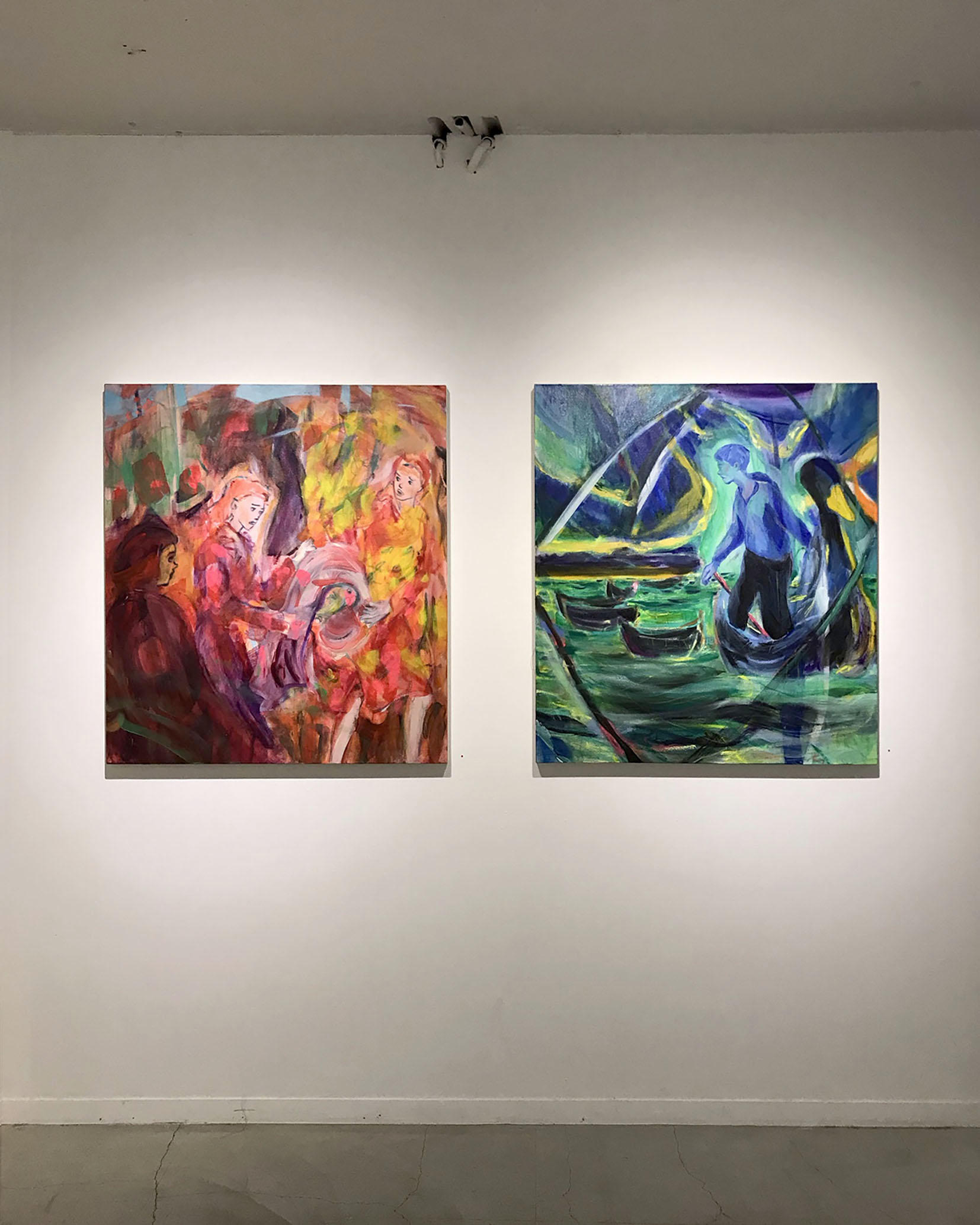 I: Regardless of the initial pairing of the paintings, I think, any painting may function to compose a story. Individual piece can serve as a part of stories, and that is the impression I had when I installed these paintings.

I like picture books or wonderful mythology, and I think that is why animals often appear in my paintings. A world, not limited by the real world but which exists close to our everyday lives and induces anybody lost by crossover, is what I aim at. I hope that viewers will drop in at such neighboring world thinking differently from their ordinary world.

Painting or writing down my artistic ideas on notebook, seems to be on a different time scale from acting in our daily life, where my work or social rules limit my behavior. The former is more similar to, it seems to me, the time scale of one's childhood where he can think, feel, act with spontaneous or adventurous feeling of each moment in fully bodily live. I just feel happy if the viewer will enjoy his own personal time, diving deeply into the time, thinking of brushwork or subjects within the picture plane. 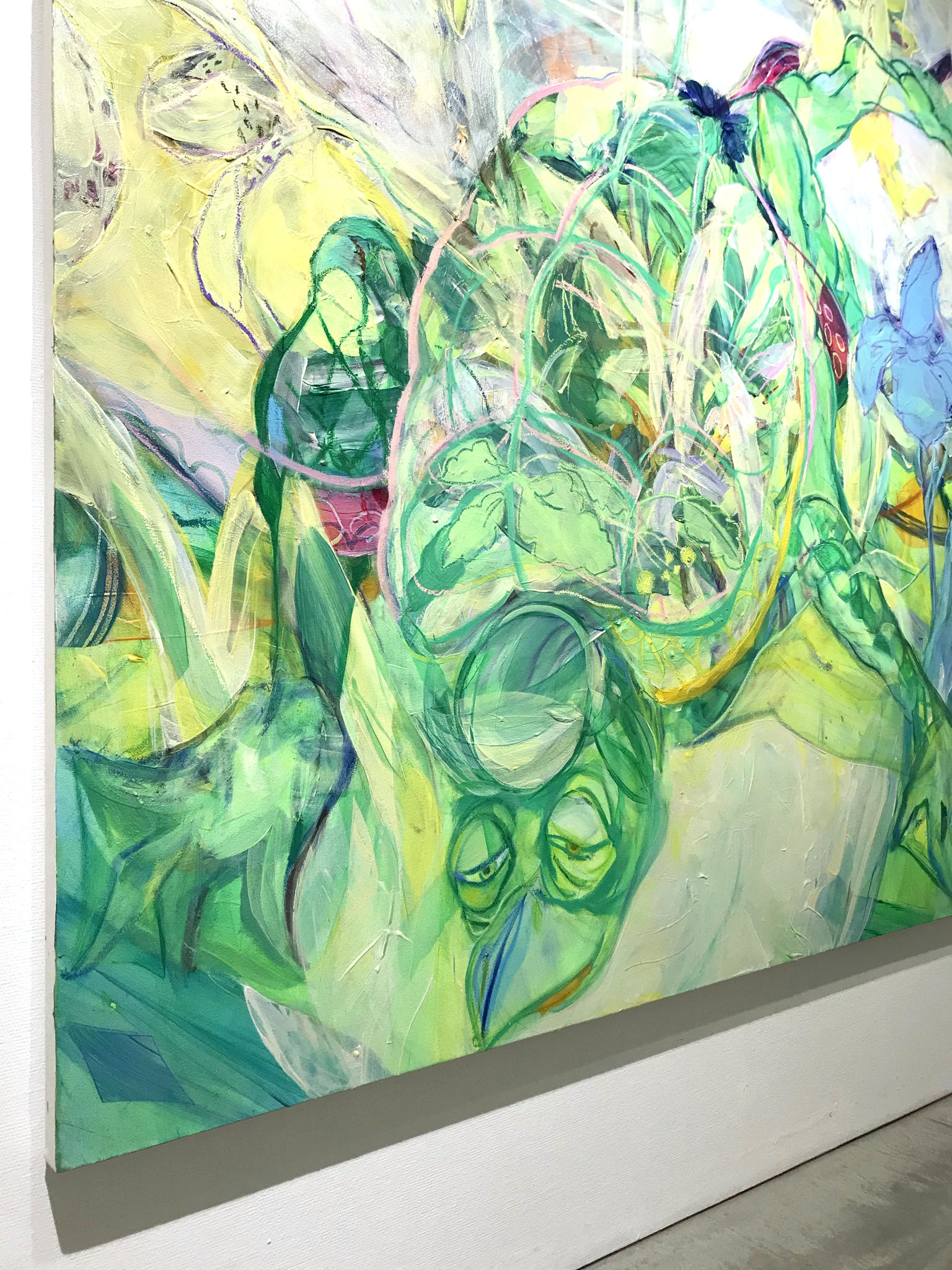 G: How about this Kappa? How do you explain Kappa to foreigners?

I: (laughing) I never explained what is Kappa in English. However, I would say "Japanese monster" in a simple manner, indicating that a Kappa is living with such appearance in the river. Honestly speaking, there was a part of an octopus drawn under the layer of oil paint for Kappa. I was then paint an octopus, who revenged me of the episode of my childhood after I have grown up. However, in the course of painting, I could not manage any more to coordinate the different elements in well-balanced way, so I shifted to "land" safely as a painter putting priority on color and lines of the picture plane, rather than leaving the figure of the octopus by force. That is why a fragment of leg of an octopus can be detected. Thus, I had this episode as an initial story for the "revenge match" after several years (laughing). 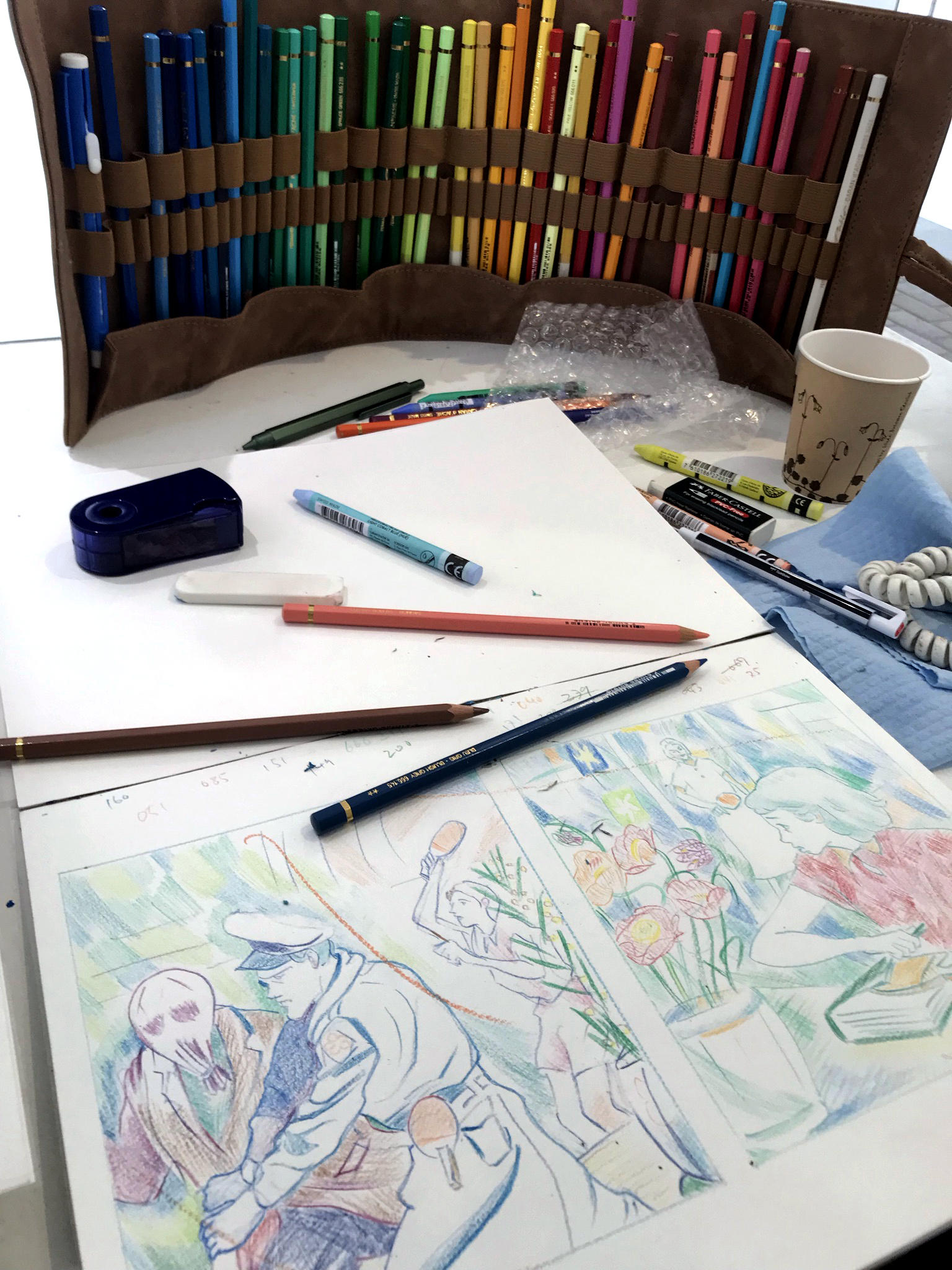 G: Ishida’s work may be liked by art collectors. They might be induced by the narrative story or his original perspective of the world. Also, some drawing lines are not so much related to the motif, but they are themselves the transference of the bodily movement or sight, integrating contradicting lines within the whole scene, which shows the keen sense of balance of the artist.

You can see the documents for both past and present pictures, concept drawings for the finished works in our viewing room. To know the background of the work gives you more clue to enjoy them.