Current exhibition at Artizon Museum in Tokyo "STEPS AHEAD: Recent Acquisitions" (2.13-9.5, 2021) introduces 201 works from Cubism, abstract expressionism to the collection of drawings by Henri Matisse, including 92 new acquisitions being exhibited for the first time, and 87 works from the collection of portrait photographs of the artists.

Among the new acquisitions, to be noted are the works of Shintaro Tanaka, which were exhibited last year at Art Front Gallery. Tanaka has fostered a long relationship, through the introduction of Shiro Kuramata, interior designer, with the Ishibashi Foundation organizing the Artizon Museum, and we would like to introduce it.

Yasuhide Shimbata, the curator of this exhibition, presented the highlights of this exhibit, especially focusing on newly acquired works of Shintaro Tanaka, as well as on the approach by the museum on collecting and presenting "contemporary art" of the respective period for the museum.

Interview with Yasuhide Shimbata, chief curator of Artizon Museum on “STEPS AHEAD”, recent acquisitions to the collection 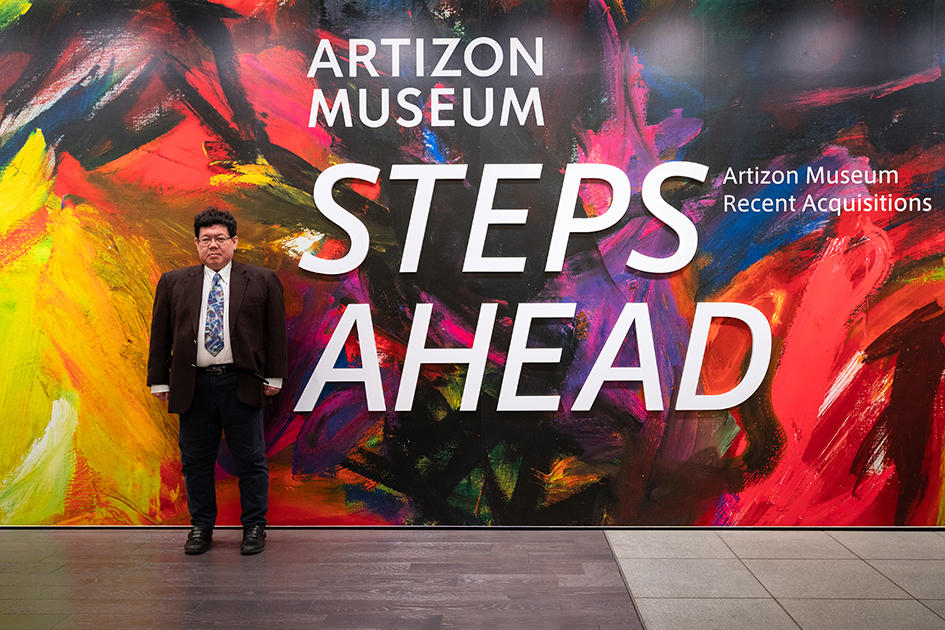 -----In the current show, we enjoy viewing the newly introduced works after your renewal exhibitions, which remained to be exhibited for the first time.

The Artizon Museum is a museum newly opened in January, 2020. It was known as the Bridgestone Museum of Art before, and closed in 2015 for about five years. The Ishibashi Foundation had continued to collect art even during the closing period, and a part of the collection has been gradually introduced, while most of the part has not yet. One year after the renewal, we wanted to show the audience our new collection especially the new acquisitions in this exhibit “STEPS AHEAD”. 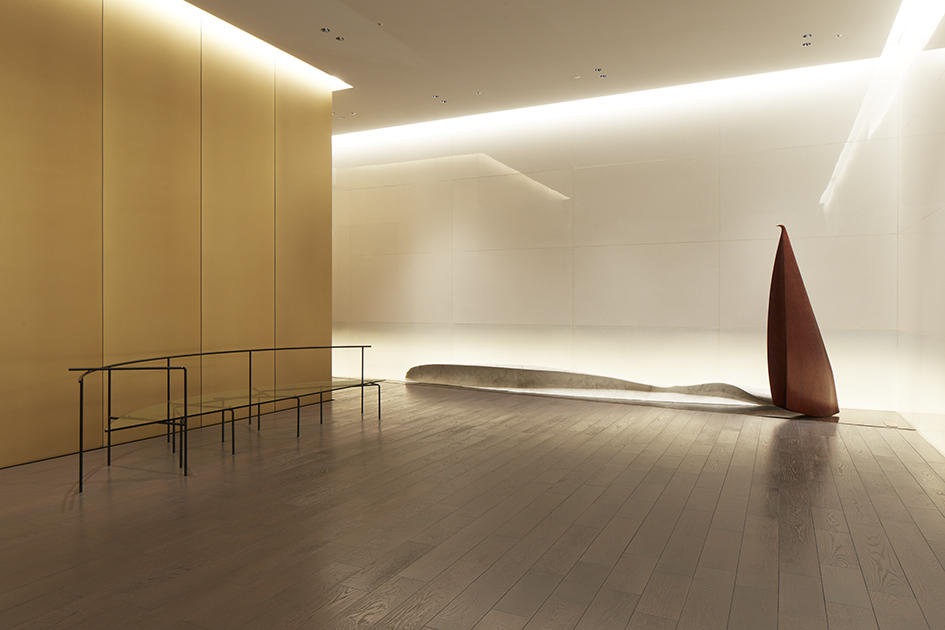 
-----Could you tell about the relationship between Shintaro Tanaka, Shiro Kuramata and the Artizon Museum?

In the Section 4 “Kuramata Shiro and Tanaka Shintaro”, exhibited are sofa set by Kuramata, actually used by people in the hall of former Bridgestone building.

Kuramata, commissioned by Hiroshi Ishibashi, Chairman of Ishibashi Foundation as well as President of Artizon Museum to design the entire space, selected Shintaro Tanaka as reliable partner among his many acquainted artists.

I have heard that Tanaka frequented design office of Kuramata, and used to answer Kuramata with an appropriate suggestion when consulted casually, and Kuramata chose Tanaka for this commission. That was how the “Then Music Began to Reach My Ears” was completed. Installation view of "STEPS AHEAD: Recent Acquisitions", Section Shiro Kuramata and Shintaro Tanaka, drawings in pencil as well as blue prints for the sculpture are on view. photo by Keizo Kioku * 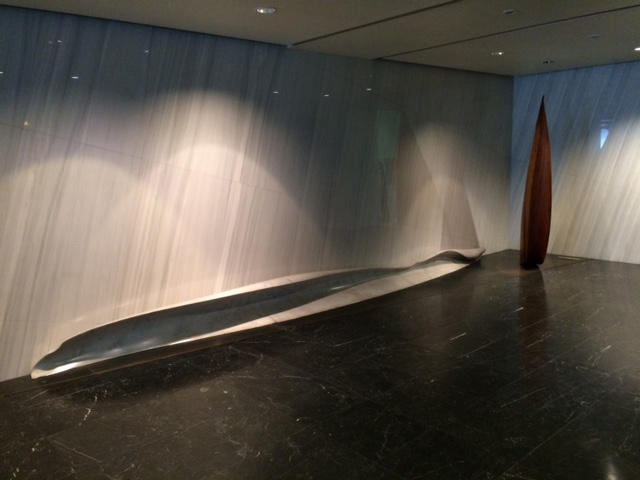 Lobby space on the ground floor of the former Bridgestone building (photo dated from June 11, 2015)*


-----How did the work “Then Music Began to Reach My Ears” move to the new museum?

This building of Museum Tower Kyobashi was completed in July, 2019, and Tanaka’s work was scheduled to be installed from our storage in the entrance of museum opened in 2020.

We consulted with Tanaka about our project asking him advices from various angles. For example, back wall of the sculpture had to be renewed, and the artist supervised the selection of different materials for the wall after detailed research, of which he nominated Chinese ones to create the new wall. This transmissive stone is lit by LED from backside.

Unfortunately, Tanaka passed away in 2019 without seeing his completed artwork nor the reopening of the museum, which we truly wished. Instead, we could purchase several two-dimensional works to exhibit them in the same space with the works by Kuramata. 
-----The works left in Tanaka’s atelier were exhibited for the first time at “Shintaro Tanaka: the Landscape Veers Perpendicularly” at Ichihara Lakeside Museum and his solo show at Art Front Gallery in summer/fall 2020. 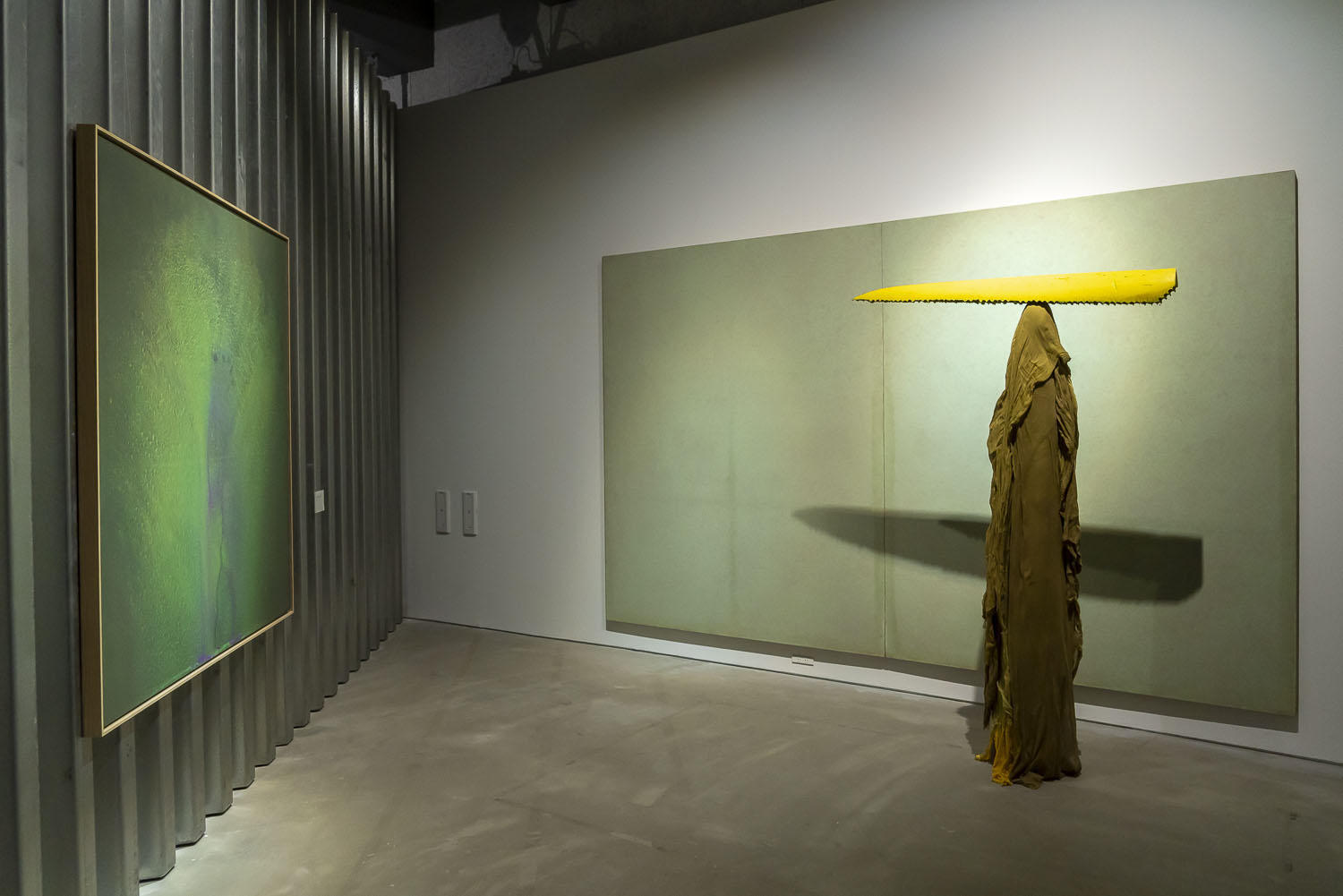 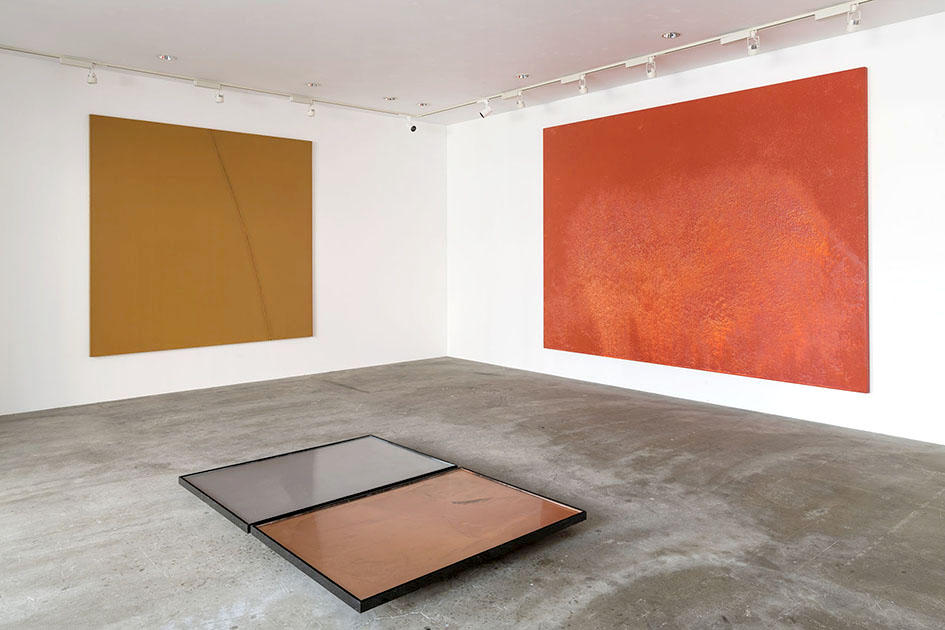 
Of course, I was long interested in Tanaka’s work from our relationship with the artist since days in former Bridgestone Building. Moreover, as you see in this exhibition of new acquisitions, our museum collection puts a high value on abstract expression. I was impressed by the abstract paintings of such high quality exhibited in Art Front Gallery and in Ichihara Lakeside Museum. I immediately shared with other staff these splendid Tanaka’s works, followed by the serious consideration of his works for our collection. Shintaro Tanaka at his atelier, dripping paints on the picture to produce with complex technique.

-----According to daughter of the artist, term 韓(HAN) in the title of these painting series may have come from the name of Korean woman artist he was familiar with at that time. In addition, Tanaka was selected as Japanese artist to be exhibited in Seoul Olympic Park, where he installed an egg-shaped sculpture. That may be another interpretation for his tendency for Korea or for Korean culture, although the very meaning of HAN remains not very clear.

Surely HAN is probably associated with Korea. We would like to investigate more.


-----Starting with the collection of new acquisitions including Tanaka’s works, are you thinking of enlarging your collection to include more contemporary works than before?

The Ishibashi Foundation has developed its collection to follow the development of Abstract Expressionism, naturally leading to present times. Newly acquired works of Tanaka are dated from 1980‘ to 2000’, which fit themselves within this policy. Tanaka’s abstract paintings will be known worldwide from now on, and we think that our acquisitions this time is an important step for Ishibashi Foundation. 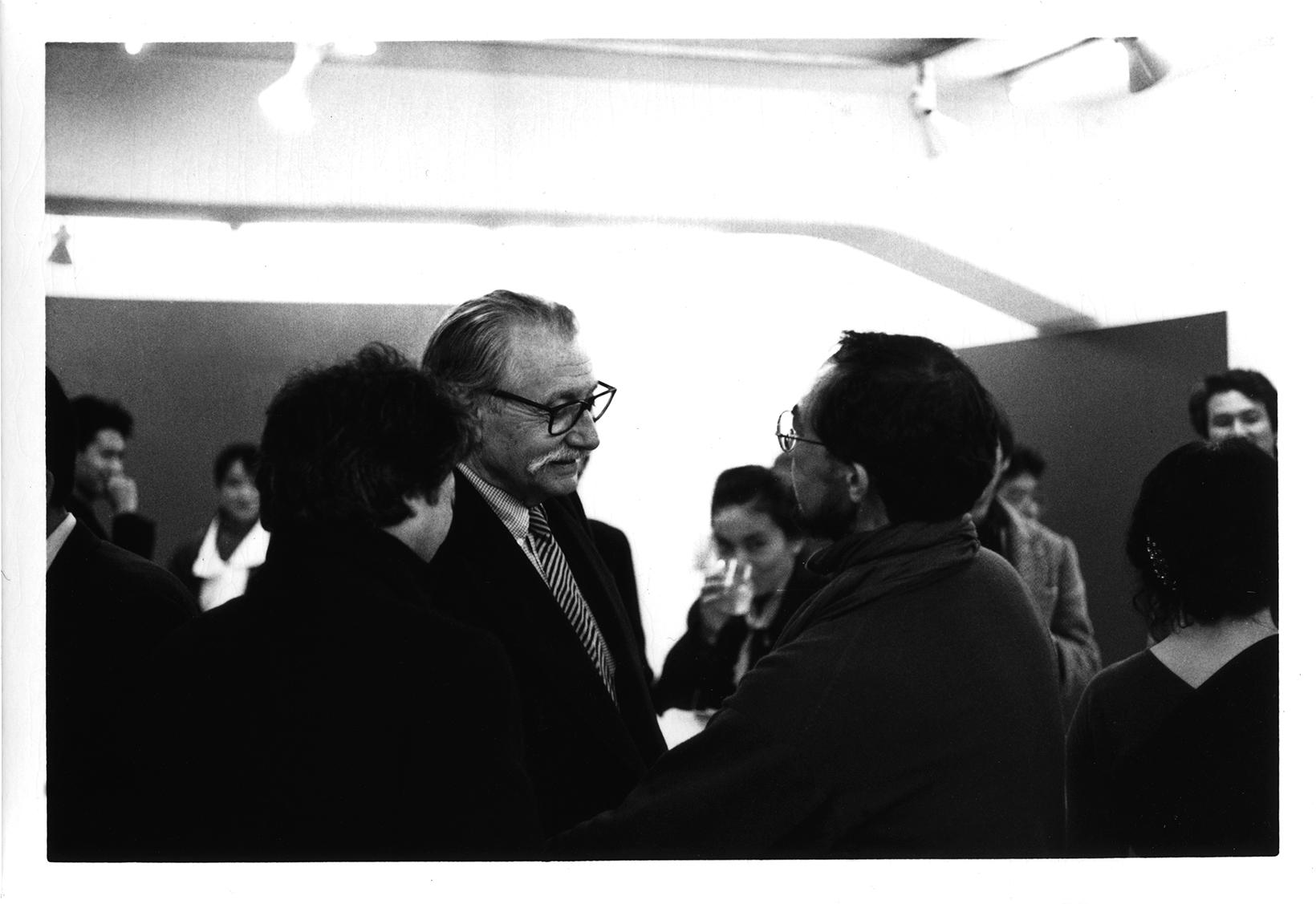 Shiro Kuramata, Ettore Sottsass, Shintaro Tanaka (from left) Future research may reveal the relationship or influence between the artists.

Collection and exhibition of “art of our times”

When Shojiro Ishibasshi, founder of the museum and its foundation, opened the museum in this place a half century ago, the core collection was works of Impressionists and of Japanese modern artists such as Shigeru Aoki. While Aoki and Impressionists enjoy wide popularity at present, we suppose there were few places before to see these “contemporary” art other than our museum. Our exhibit should have been something innovative, which we’ve been tried to keep as revolutionary exhibit at times. In other words, we have always been conscious of contemporary art or art of our times.

Although our museum (Bridgestone Museum) has been rather considered as classical or conservative museum in its collection, we have always kept our eye for contemporary art. Now that Artizon Museum opened, we think it is an essential to enlarge our collection including contemporary art, in order to show clearly our flexible attitude to changing society or environment which surround our museum. Mr. Shimbata, the chief curator, in his interview -----Seeing your exhibit “Jam Session: The Ishibashi Foundation Collection x Tomoko Konoike Tomoko Konoike: FLIP”, awarded Mainichi Art Award 2020, is one of such examples of your interest in contemporary art, isn’t it?

This exhibit was curated by Kyoko Kagawa, curator of our museum. In this renewed Artizon Museum to showcase the new aera, Michiko Kasahara, Vice Director initiates and proposes new exhibit series where the Ishibashi Foundation Collection and works of contemporary artists interacts each other.

-----Jam Session or collaboration of existent works and newly produced works, isn’t it?

Yes, interested in the works of Konoike, the curator challenged how Ishibashi collection and contemporary artwork could be juxtaposed side by side in the exhibit room. In fact, “Deer Running in the Snow” by Gustave Courbet was exhibited with works by Konoike, which produced interesting interaction, I think.

We tend to categorize art with period or with place, however, the artists have been inspired by other works beyond the limit of period and places. Different view point for both old and new pieces can be revealed through such innovative installation.  Thus, we believe that we can present new vision for new works of our times by keeping our collaboration between Ishibashi collection and works produced by contemporary artists. As a first step for our new vision, we are scheduling a solo exhibition of Yasumasa Morimura late in this year, and we hope everyone enjoy it.

Both artists, Tomoko Konoike and Yasumasa Morimura, are leading artists in Japan who are very influential for younger generation as well, we will be glad if these Jam Session series are appealing to wider range of generation. Different types of artists will be featured in this series, questioning the possibility of focusing on new artists under our fundamental policies of museum operation. 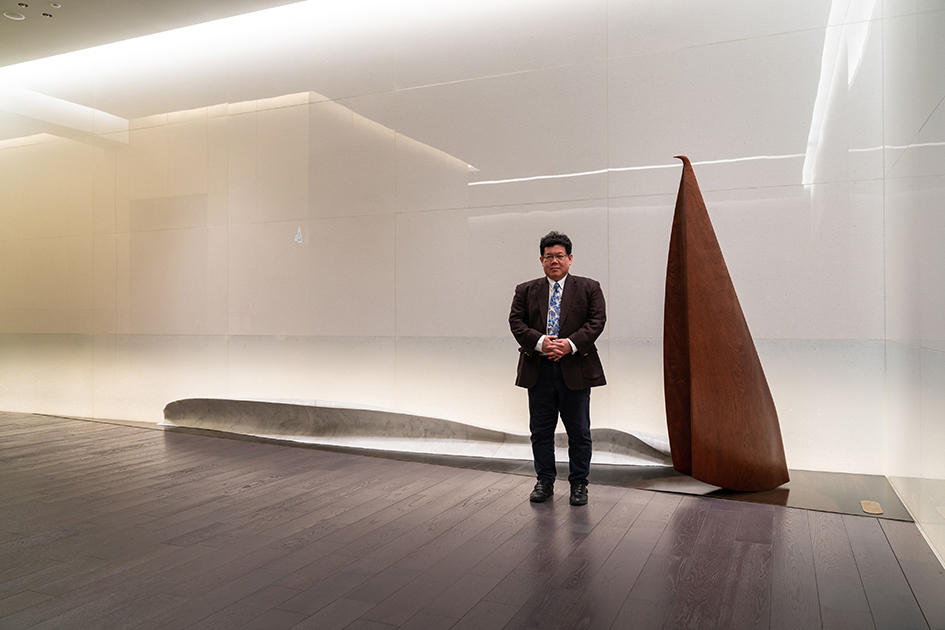 -----Do you have any message to the readers for this exhibit?

Since the opening of Artizon Museum, there installed were “Then Music Began to Reach My Ears” by Shintaro Tanaka and “The Glass Bench” by Shiro Kuramata at the entrance lobby. This exhibit is a special occasion to show the presence of these works as well as the relationship of these two big artists. Within the exhibit “STEPS AHEAD”, in a specific section, we are glad to shed light on the background of these pieces.

■"STEPS AHEAD: Recent Acquisitions" is on view at Artizon Museum through September 5.

■Works of Shintaro Tanaka was exhibited in the booth G098 (ART FRONT GALLERY) at Art Fair Tokyo from Mach 19-21. 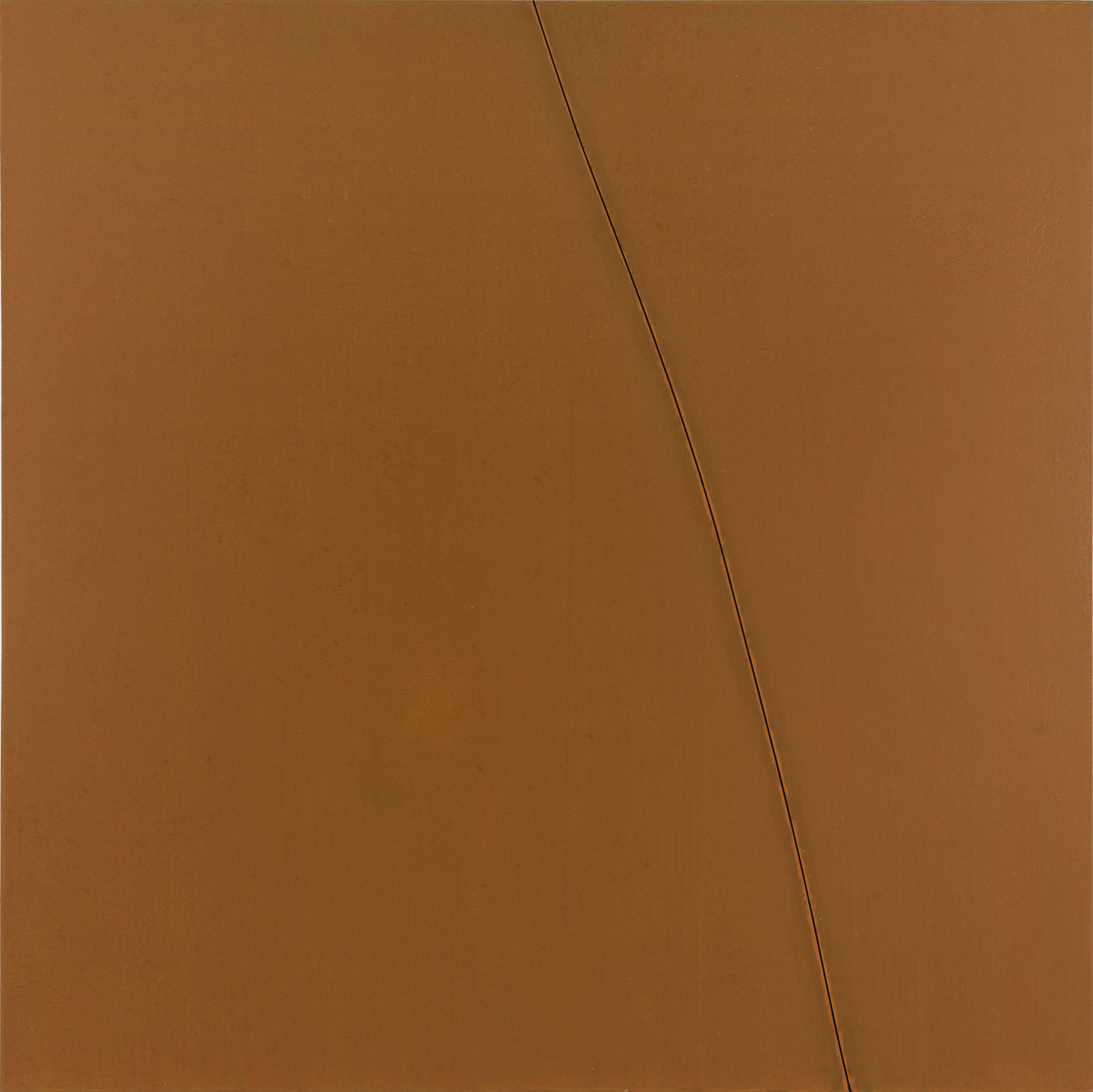