Art Front Gallery is pleased to presents the stories about the current exhibition Play it Again by Adel Abdessemed. Please enjoy articles via online during its quarantine period. 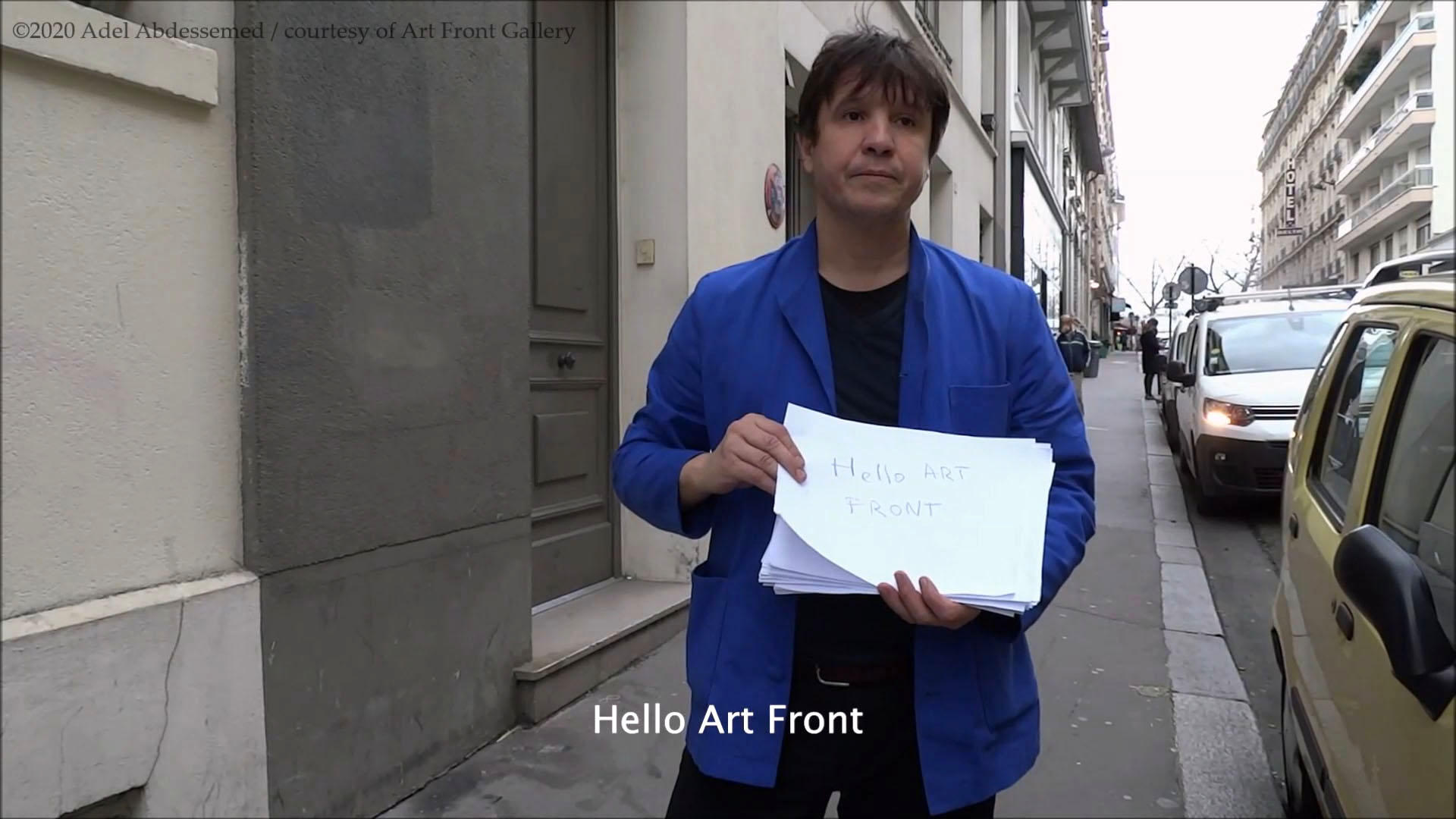 Increasing danger for outbreak of coronavirus all over the world prevented Adel Abdessemed from coming to Japan for inauguration of Ichihara Art x Mix as well as that of his solo exhibition at Art Front Gallery.

Instead, a video message was sent from Paris where the artist lives. This video, starting with the phrase “Hello, Art Front”, points out the present situation of the world as “out of joint” , which had been globally connected but split into the fragmentary entities now, lamenting inability to come here (Japan). 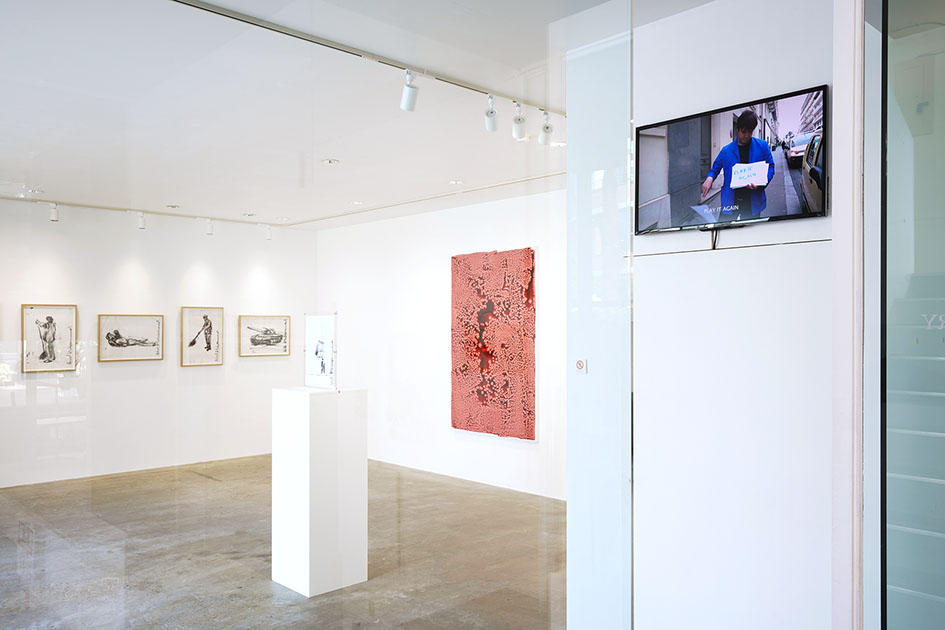 
In this point of view, "Forbidden Colours" may be the most impressive piece, as artist’s response to the present situation, among other exhibited artworks. 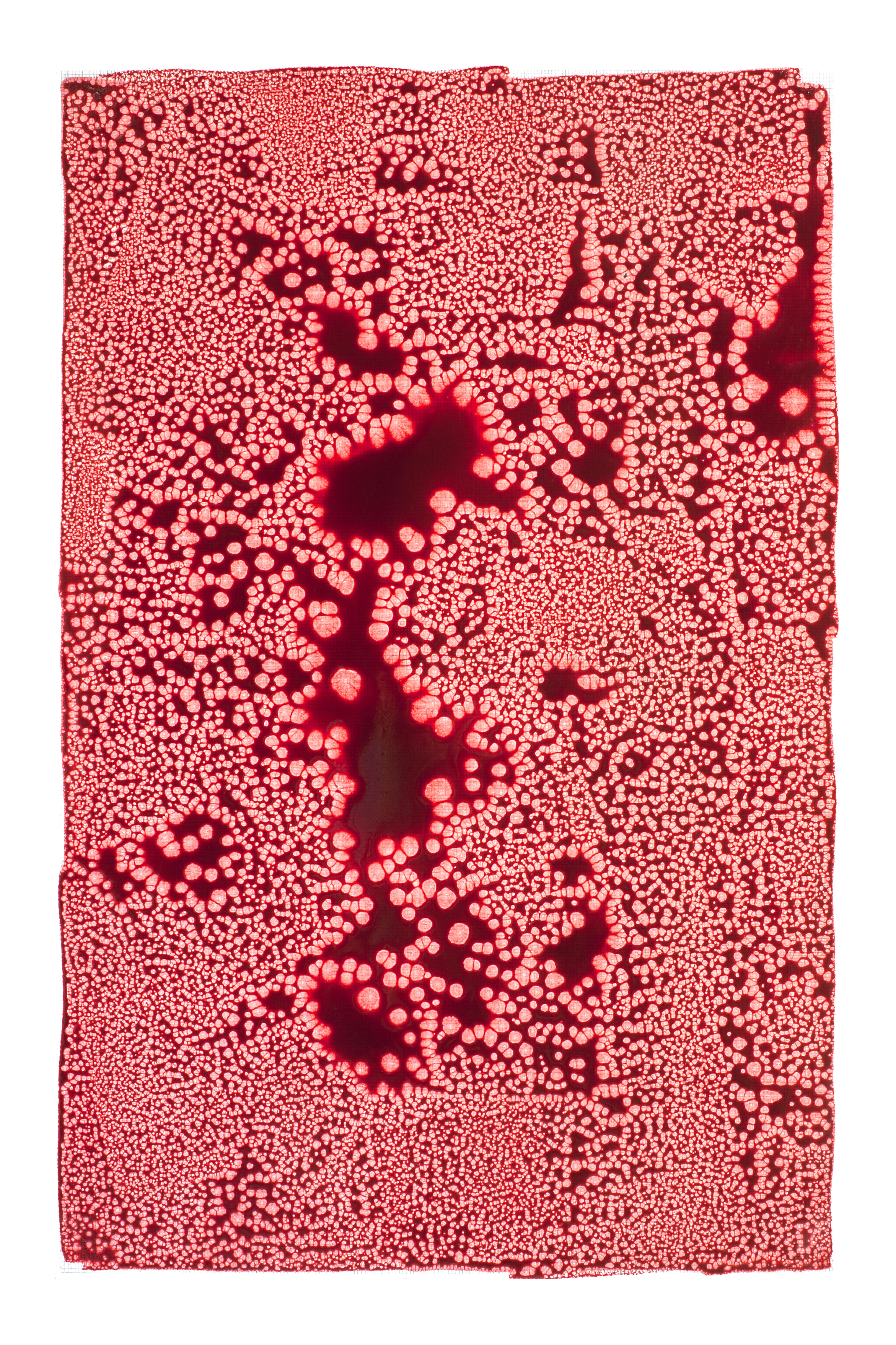 
The whole large work is covered with the net in red which reminds us memento mori, with blackish lump of paints here and there. Adel Abdessemed actually used the material which is used for special effects in film making industries. He dripped the fake blood in several layers on the canvas. Glaze-like surface is just beautiful, while this “fake blood” brings us to think about the concept between real and fake, simulation and illusion, repetition and proliferation. 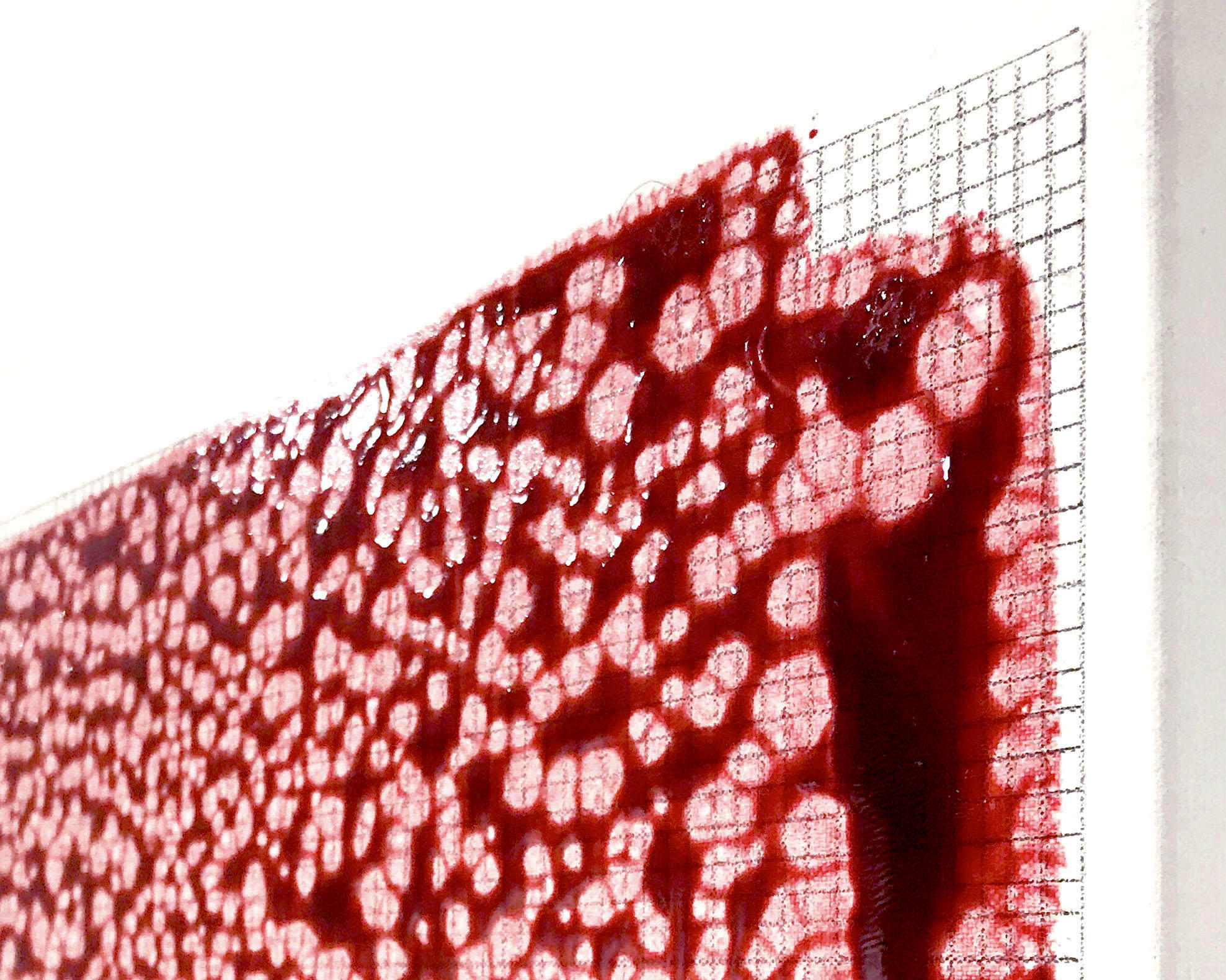 The artwork is presented in front of us with the materiality and the artist’s intention referring to omnipresent violence and tragedy. Speaking of present situation, this reminds us easily of the death of beloved people, massacres of familiar places, or “dead cities” all over the world: “pathetic of the everyday”, just described by Fumio Nanjo, former director of Mori Art Museum, in his text for this exhibition. 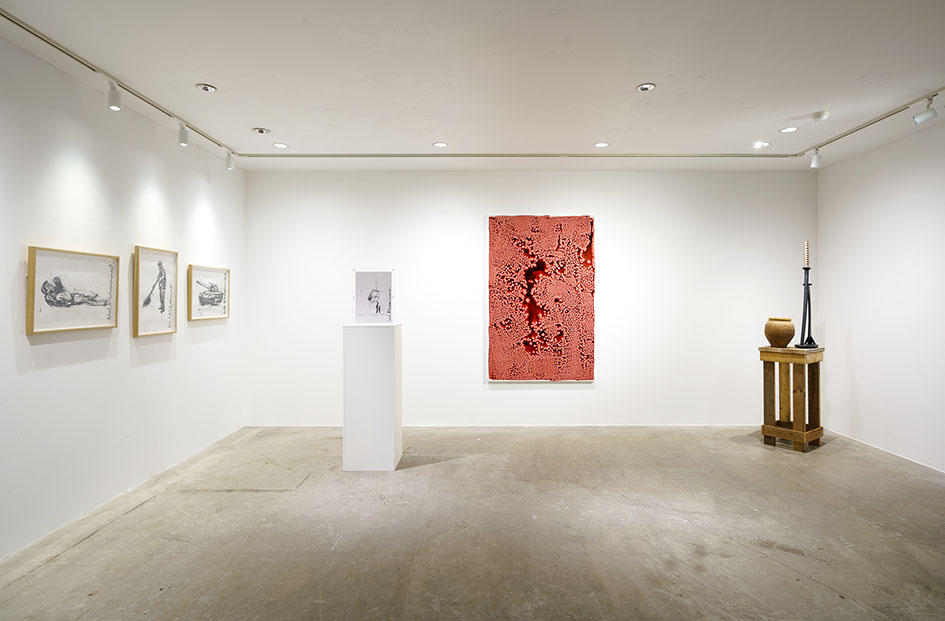 
The title of this work, “Forbidden Colours” is taken from the one of a Yukio Mishima’s novel: no reference with the story of the book at all, but saying that the concept fits with his works, “something is forbidden”.


Exhibited next to this painting is, “The Vase and the Sword”, an artwork the ceramic vase and the wooden sword come together on the plinth. 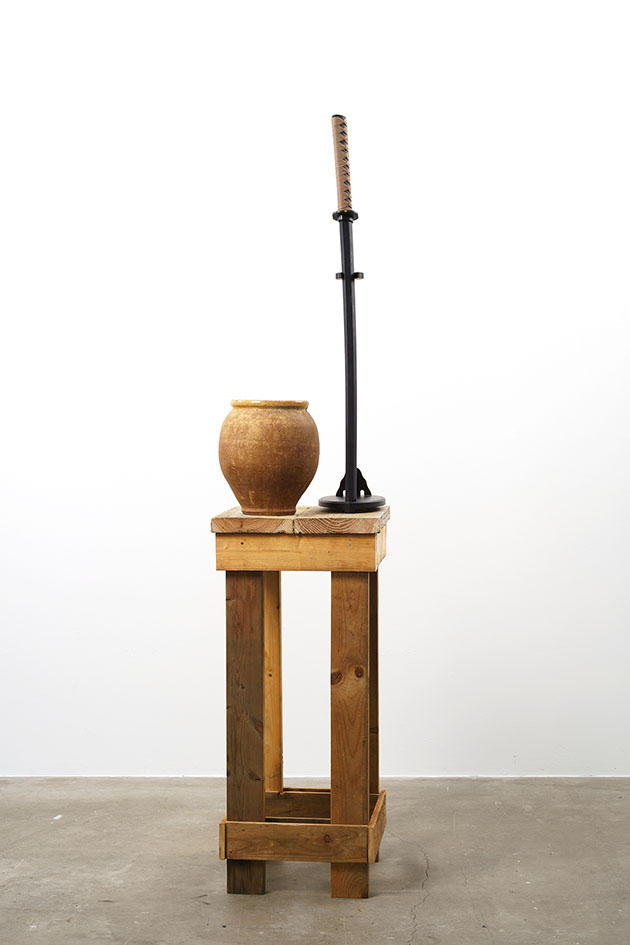 
“The Vase and the Sword” is inspired by and linked with the book, Marguerite Yourcenar's "Mishima ou La vision du vide", 1980. The relation between the sword and the vase is parallel with the distance to the one between the sword and the severed heads of Mishima and Morita in the scene descripted by Yourcenar at the end of her book. The work and its title are also a distant echo of "The Chrysanthemum and the Sword", a 1946 study of Japan by American anthropologist Ruth Benedict.

Fascinated by Japanese cinema from Yasujiro Ozu to Akira Kurosawa, Adel tries to bring back it to life through his art. He once stated that “my arts express my will and strongly based on my sensitivity. When they come across fascinating objects and figures I have encountered, I work on them and exhibit in a special setting and to revive the figures into the art. Through this process, the work is given a new shape and reborn as a new art form.” 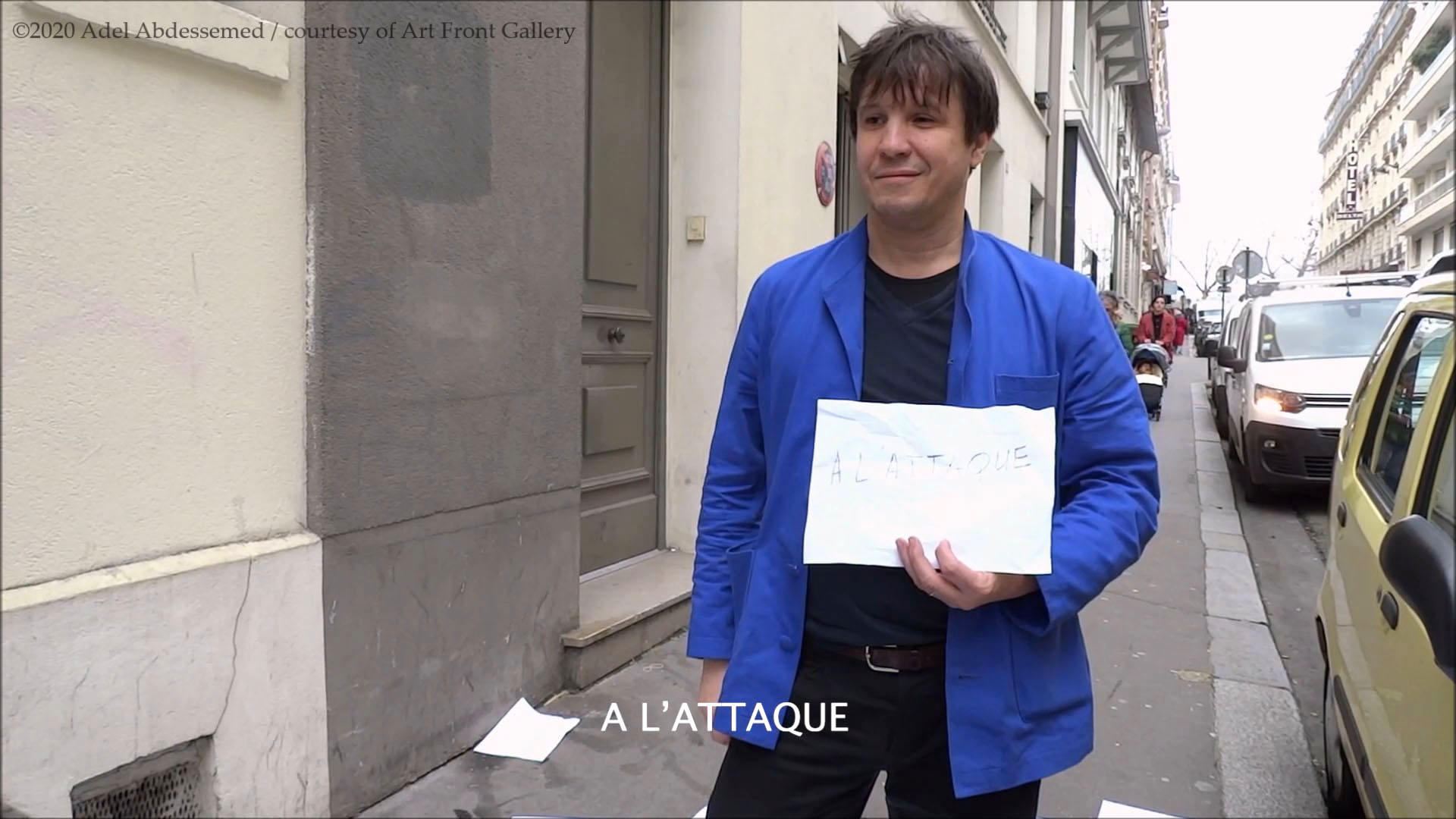 As mentioned above, Adel showcases express tragedy and violence hidden in everyday life using a visual language that can be understood by anyone, convey universal emotions, and have a deep interest in Japan. After leaving his hometown Algeria at a young age, he was an artist-in-residence in Paris, New York, then moved to Berlin to have base in Paris again. All these cities seem to have offered the artist various inspiring sources in his career of cosmopolitan artist. As appealed in the last scene of his precious video message with tickers reading “A l’attaque!”, he keeps encouraging himself as well as all of us. Our battle against the invisible enemy goes on.