We introduce some works from current solo exhibit "TODO: Chikuho Coal" with comments by the artist. Please appreciate TODO's feelings in the multi-layered work together with his words sympathized with the memories as well as the time the objects contain.

It was a long-standing dream for the artist to realize the creation of Bota work out of wasted stone collected from Chikuho coal mine in Kyushu Island in the South Japan. In his formative years in Germany, he had already challenged it with German coal as material. Japanese Bota, or wasted stone not attaining the criteria as coal, was once familiar with local people, who collected them to make use for fuel or built stone wall out of Bota with processing of cement. TODO tried hard, in several years, to conceptualize the creation of Bota as an artist, and acquired plenty of Bota to work with in collaboration of his friend from this area.

"These Bota are treasures to me, while they are just debris of no use for ordinary people, who have thrown away these wasted coal blocks. That is why I feel sympathy to them."

TODO inserts window glass of 5-8mm in depth between the cut stones, polishing and transforming the neighboring area of rough texture into shiny and smooth facet. The green color of the layered glass is produced naturally out of iron as mineral element. He once exhibited in the same venue an installation with debris so that the glass facets are clearly visible from the viewers or even from the passers-by on the street since he featured then "light and transparency". This time, however, he rather hid the shiny glass facets into the wooden box since they are, "wasted" stones to be ignored in ordinary situation. Pearl is a familiar material for TODO, grown up in Uwajima that is renowned for its pearl production. He had been challenging to produce experimental pearl with help of local artisans without success. For this exhibition, he got the "Baroque pearl" which has not been selected as an official pearl, and put them with Bota on a wooden box to present it as an installation of something with any value of commodity. 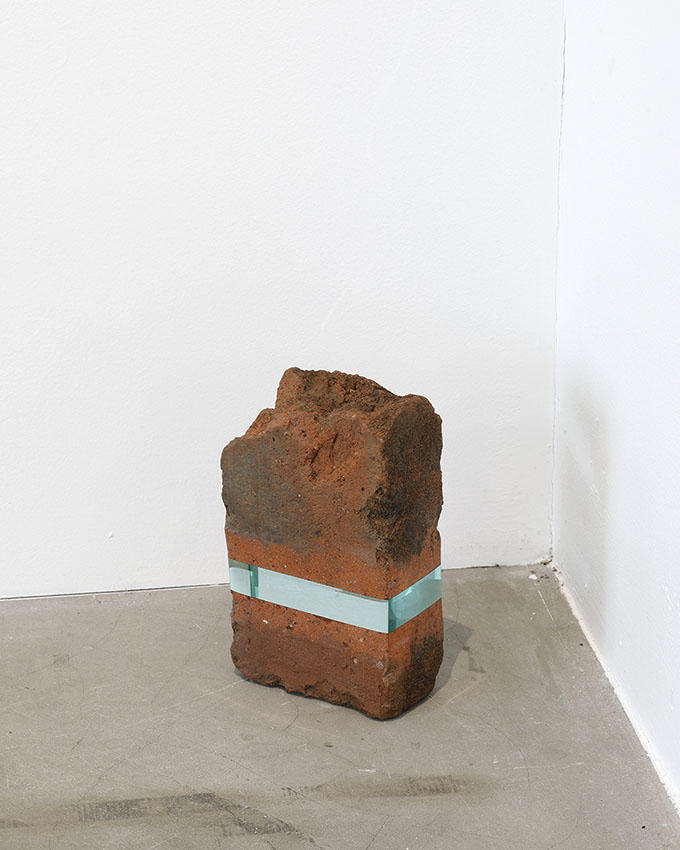 TODO worked with brick from Chikuho coal mine, as he already produced a brick-and-glass work with one from a private residence entitled “Ziegle_A’s Residence. This time, he used brick from coal-mine, since “The brick-made-base for wheel to get the coal and stones up to the ground level are still there. This brick is an original one from there to have kept the memories and traces of the venue, just like other stones and coal. You see, the irregularity of the brick is just interesting.” 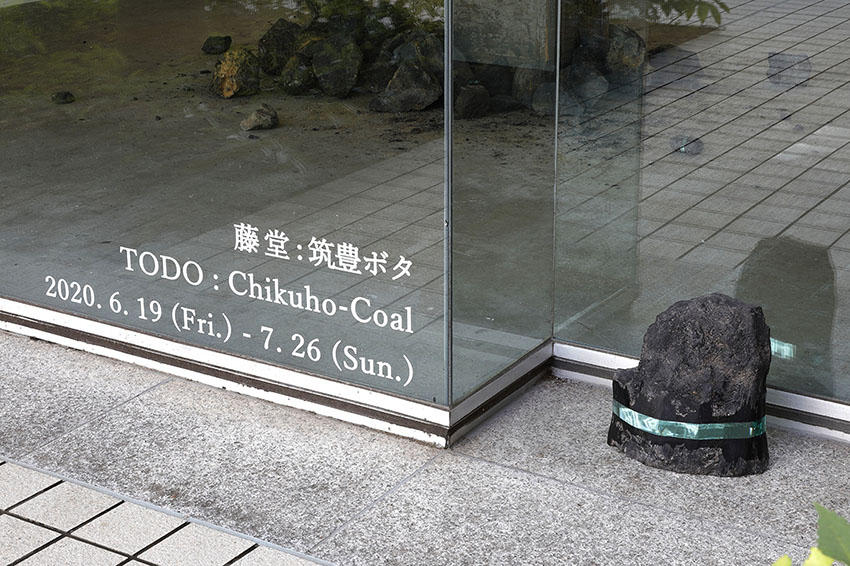 This is one of the Botas in unique form. It is being exhibited outside the gallery show-window only when TODO is in the gallery, to invite the passers-by inside. 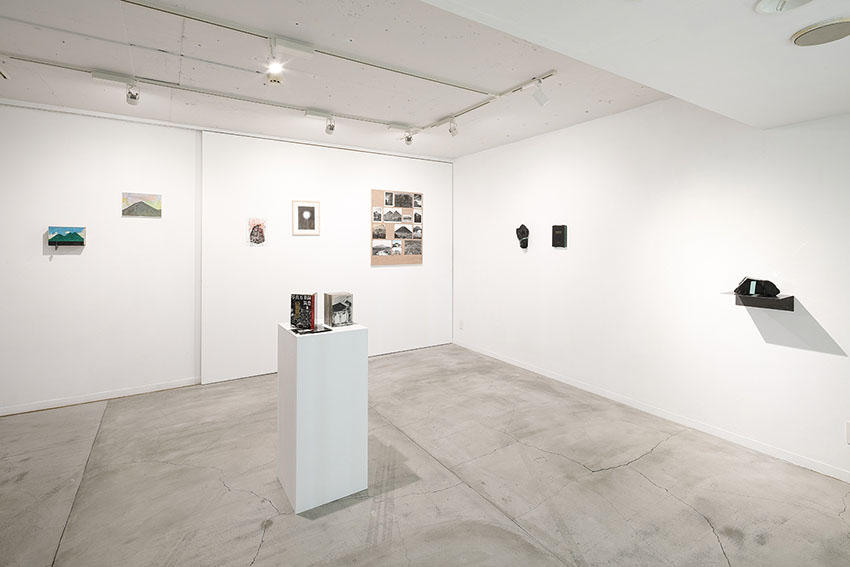 Some works associated with coal mine are available in the gallery in the middle. 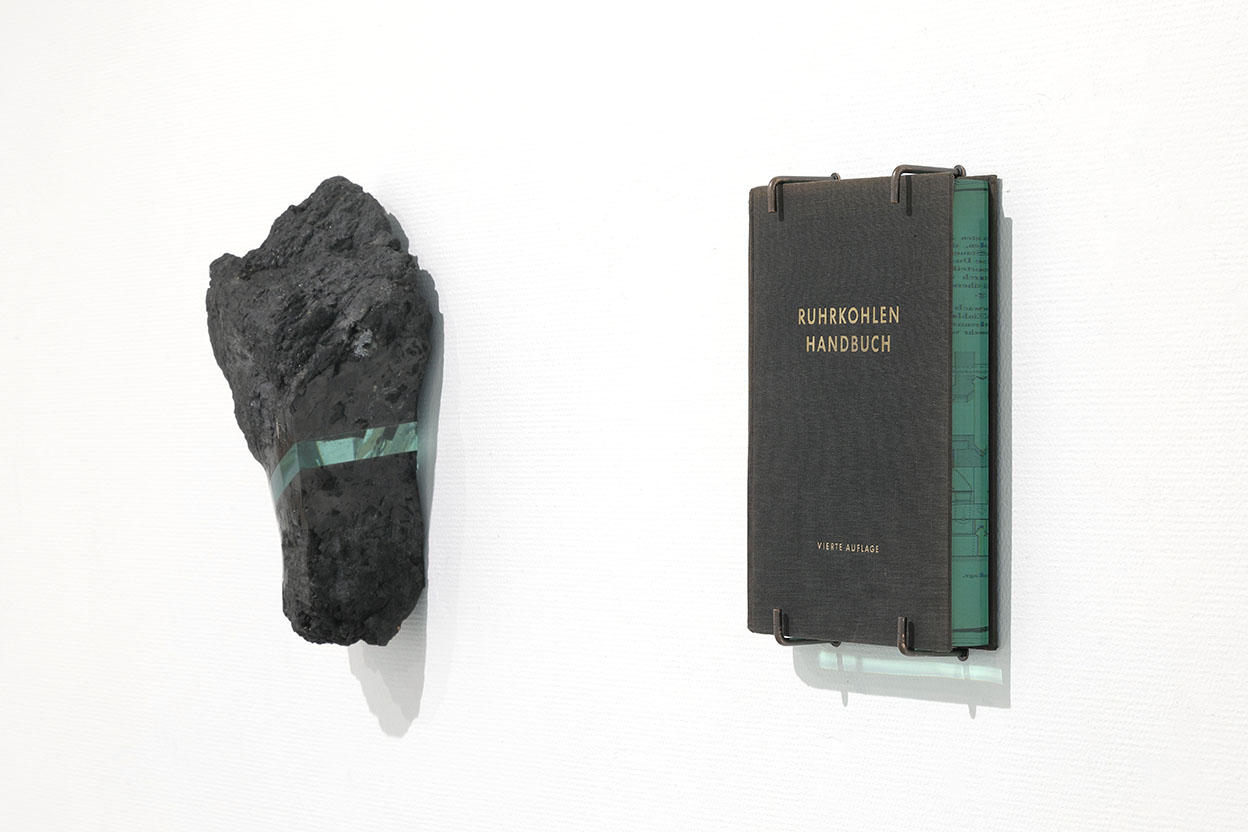 This work was produced with coal in 2006 when TODO studied in Germany. Coal is softer and more fragile than Bota stone, but he managed to cut it to polish for the process, while using glue to keep its form to have a smooth and beautiful surface, which is different from Bota’s surface.

The title reads as “Handbook for the Coal in the Ruhr Region”, reporting the characteristic of the cola in Ruhr or its selection process, all technical concerns. The artist was impressed by the book binding with gold letters on the black background. “In German slang, Kohle also means money. In fact, coal is a black diamond to make money.” 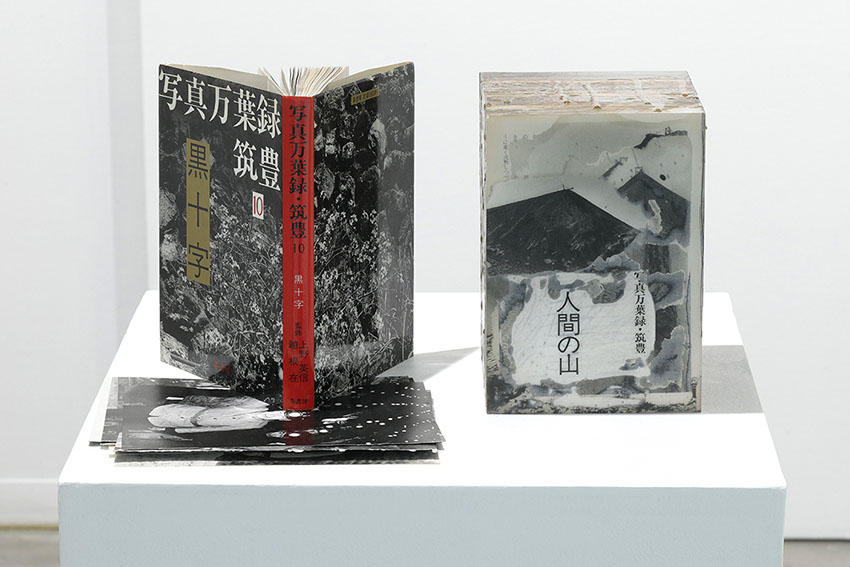 “This is a block book series to transform the book into a block. I used this time the photo book of the Chikuho Coal mine as the material: I pasted the pages one after another with the resinous glue. First ten pages are glued, pasted, glued, pasted to have a solid form to be lopped off for smooth surface, then started again with next ten pages. The texture of the layers thus produced will be totally different according to the species of the paper. “

The overall work contains literally the history of Chikuho Coal mine in its layers of paper. 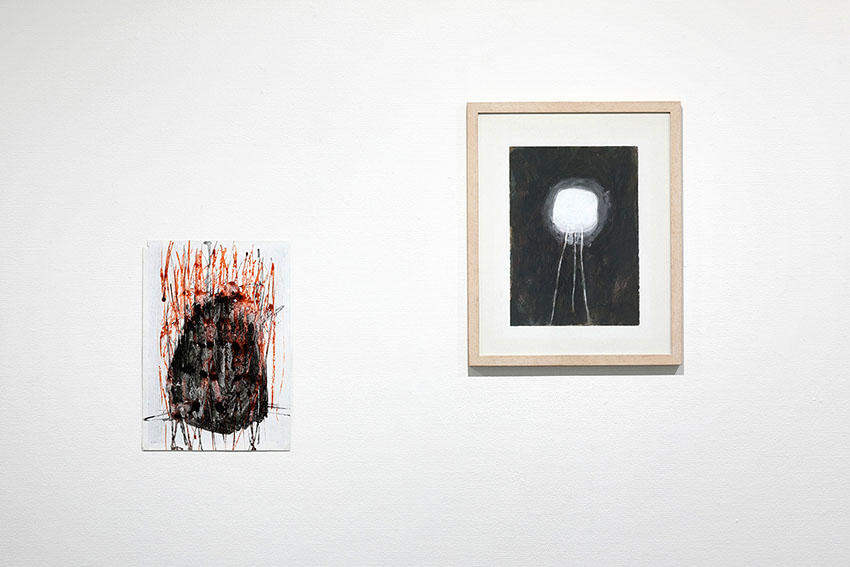 TODO used to make a drawing every day finishing his work at atelier. He drew on the backside of a page taken from magazines. It was an assignment for himself. 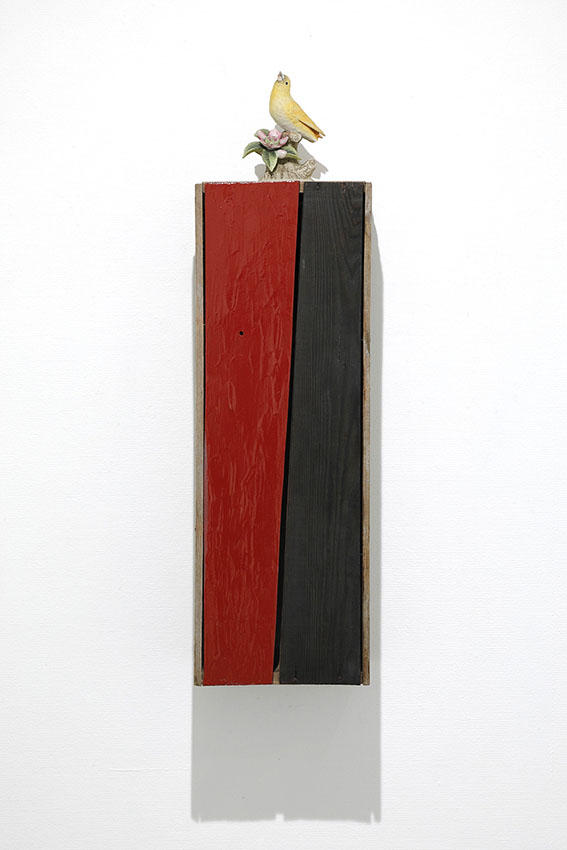 TODO collects boxes for himself for his creation of drawing on the surface of these boxes. The box is also containing a space within itself and is able to serve as a “pedestal” thus considered as multi-functional.
“In old days people used to bring canaries to the coal mine to check the oxygen concentration: people quit working to return to the ground level when canaries are weakened. In my opinion, like a canary, an artist can alert the people of the critical situation which is hidden underground of the society. I am rarely conscious of such role by myself, while I put this as an artwork associated with canary, coal and mine, which I found interesting.

Chikuho Battery was produced as an homage to “Capri Battery” created by Joseph Beuys. While he used lemon as the energy source or battery、TODO put Bota from Chikuho coal mine which supported the modernization of Japan altering the meaning of the memory of the place in situ.


In the last room, artwork using the rare stones collected from all over the world are currently exhibited to show the variety of TODO work. 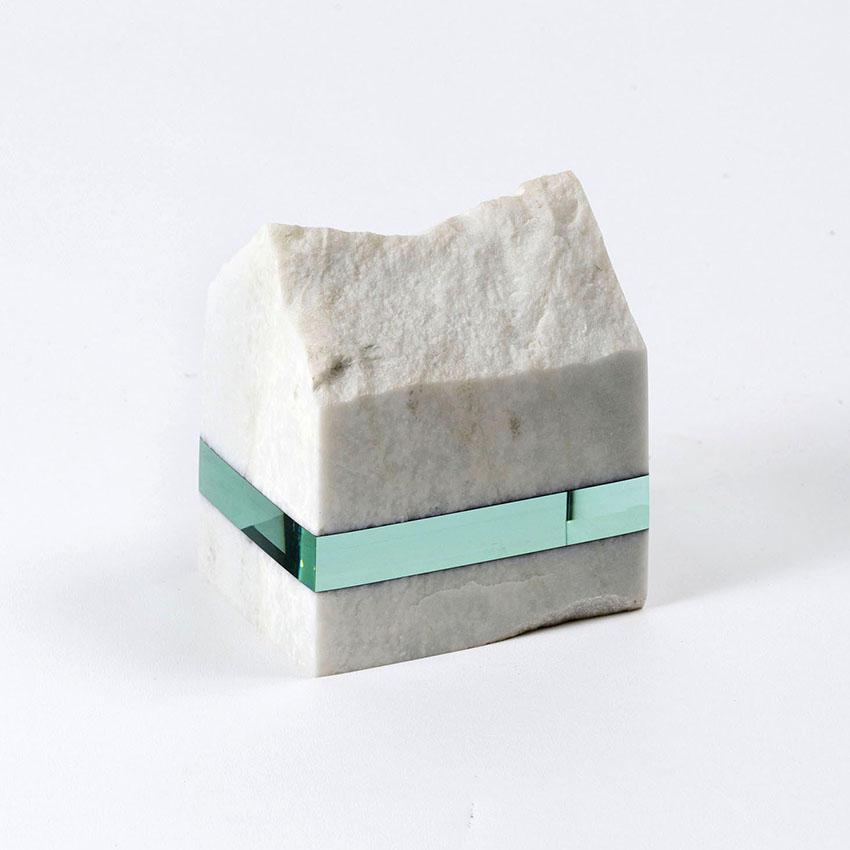 The fragment of a white marble left in the atelier of the artist had appearance of a three-layered house. Then he made a work with it, while the artist made a special selection of his own under the title of “House＝Layer” 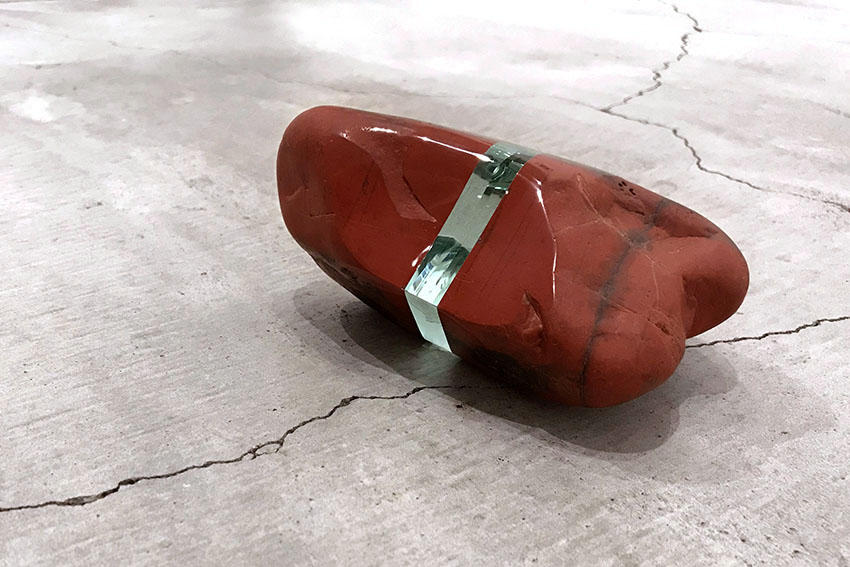 This is a rare Indian stone that the artist collected in the course of tour in India. Participants of this tour were pulled by donkey to pass the big desert.

Other stones from Taiwan, Sardinia Island in Italy, Mt. Brocken as Witch’s Mountain are also available among many other stones on view.

The exhibit “TODO: Chikuho Coal” will be through July 26 (Sun). We appreciate your visit to look deeply into the TODO world.