Throughout art history, the term "dystopia" has been associated with images of ruins to inspire artists to create. The Greek and Roman ruins that marked the beginning of European civilization were not only depicted in the background of Renaissance religious paintings, but in the 18th and 19th centuries they were also part of the educational journey of the children of aristocrats, who created many prints on the theme of ruins.
What does dystopia mean today? Artists are presenting works from their own perspectives in search of an answer to this question. This exhibition prophesizes the opening of a new year and presents the diversity and various paths of dystopia through works of art that explore dystopia as opposed to utopia.

A video work that captures the world of our memory in the form of moving images. Akira Kugimachi presented a video inspired by Samuel Butler's novel "Erewhon". While driving through the Gavi region near the Swiss border, Kugimachi thought of expressing the process of a sequence of random scenes shot from a car window as a film-like sequence in the form of a video work. This is the course of my dialogue with the sublime landscape I happened to encounter, and at the same time, it is my own personal letter to Erewhon, who describes his encounter with an uncivilized civilization with surprise, respect, and thoughtfulness, and who still raises strong doubts about modern civilization. The book is also a "round-trip letter of my own to the novel Erewhon, which still raises strong questions about modern civilization. 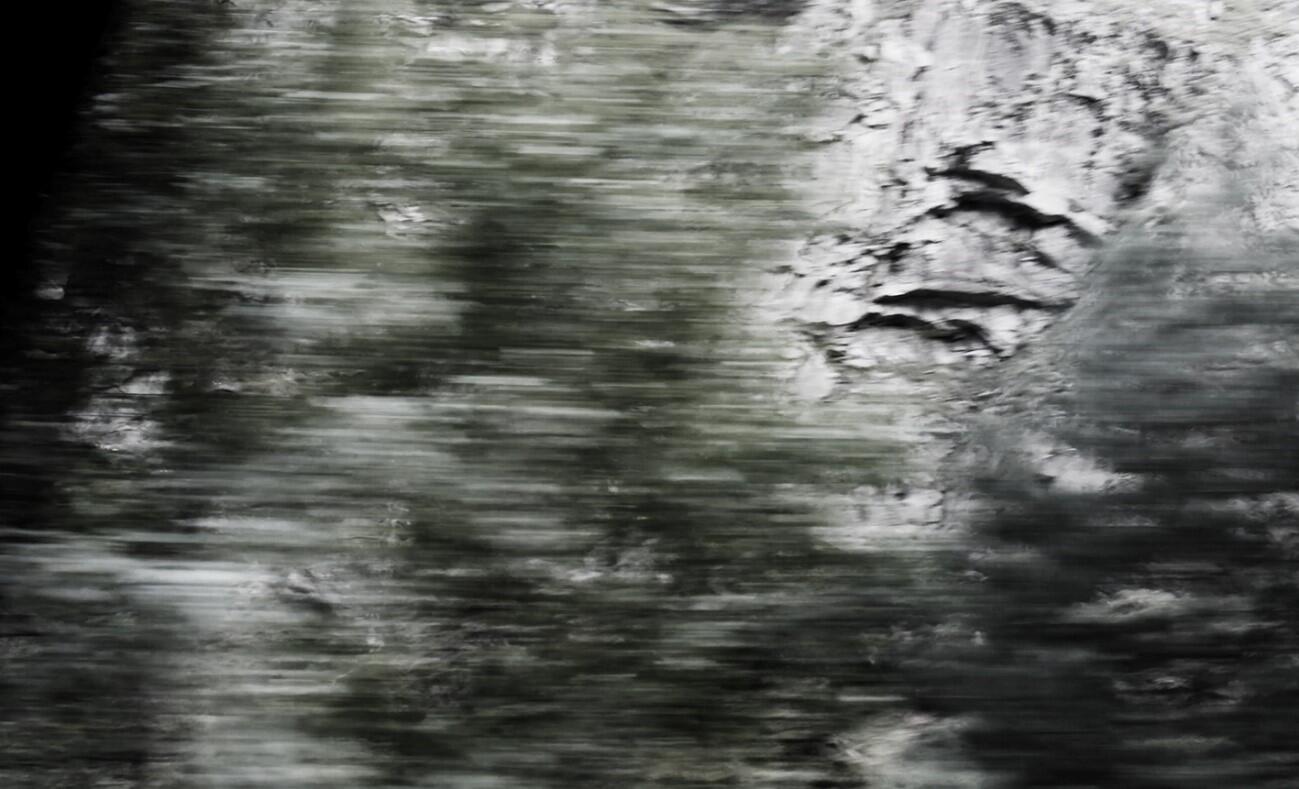 French/Moroccan artist Munir Fatoumi presented an installation at last year's Setouchi International Art Festival that suggested the ruins of the Miyake Clinic in Uno Port. Combining a building that has been unused for many years with a video that witnessed the demolition of an apartment building inhabited by immigrants from the suburbs of Paris, the installation attracted much attention.

This time, Mounir Fatmi studies the impact of modern technologies on memory while questioning the obsolescence of media. Techno-scientific progress has led to the rapid substitution of analog media, surpassed by digital images as society becomes increasingly virtual. The artist thus brings back to life anachronistic and formerly glorified devices such as books, in order to question the revolution of images and media that deeply modified our perception of the world and distorted our sense of memory. The title of the video refers to the white matter present in our brain that is responsible for the propagation of information through the nervous system. Just like the root systems of trees, this type of tissue is composed of millions of communication cables, each one containing a single long thread, the axon, enshrouded in a white substance, myelin, whose function is to facilitate the transmission of signals.

Perhaps the most shocking work of art in a dystopia that is the opposite of an ideal world is the stone bread "Palyanytsya" by Ukrainian artist Zhanna Kadyrova, whose work will be exhibited at the 2022 Echigo-Tsumari Art Triennial. Kadyrova collected stones from the river and turned them into artworks, which will be exhibited together with a video documenting the production process. The bread, which symbolizes a situation on the brink of life or death, reflects the artist's wish to send a message of peace through art. At the beginning of the war, I felt that art was as fleeting as a dream. Now, however, I believe that art can deliver a voice" (artist's comment). 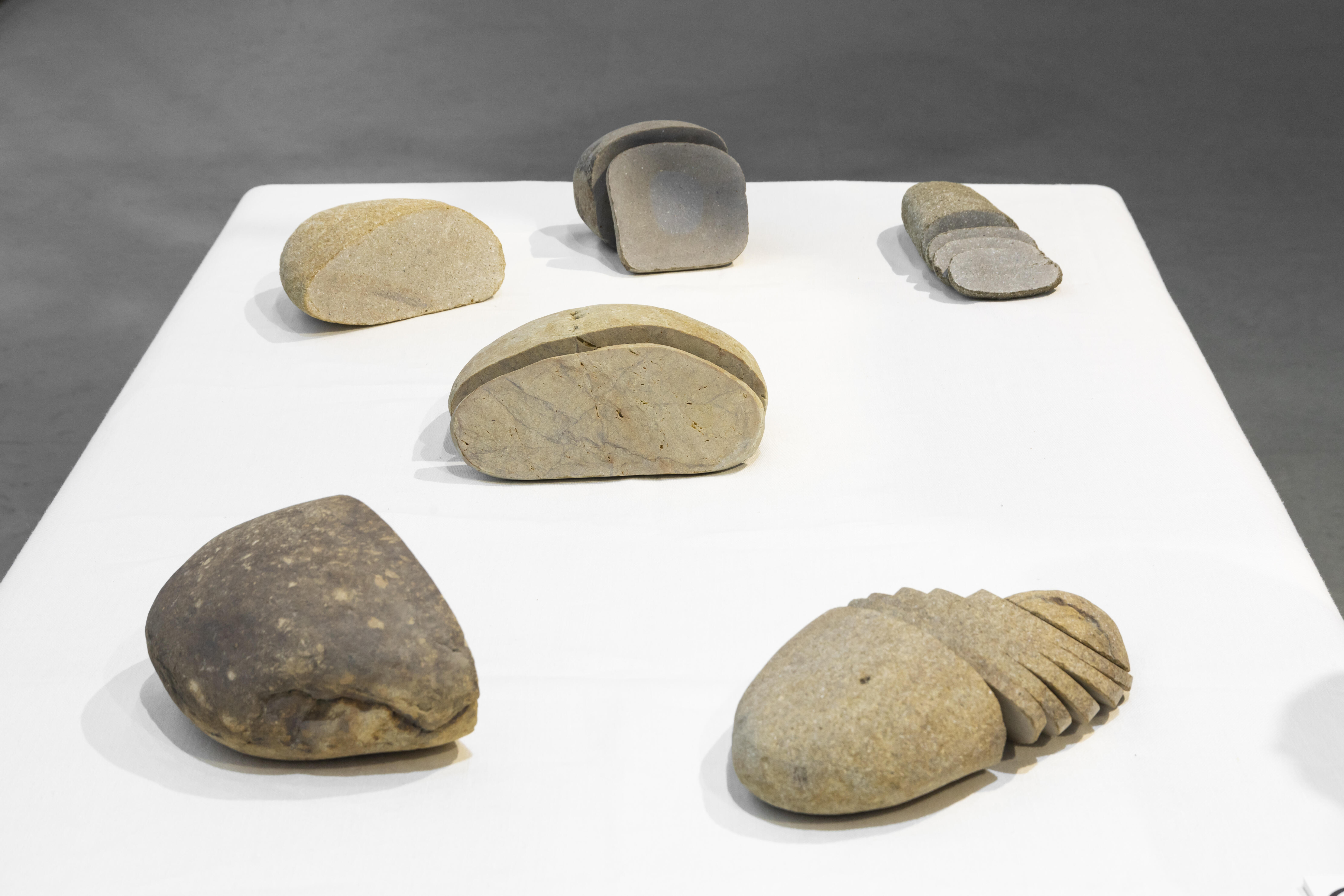 Among them, "Spirits of Cairns" expresses the afterlife that a child who dies young may end up in. The destination is a world without joy or sorrow, and the protagonist feels guilty for his early death, but he does not know the true nature of his unresolved feelings. The work of mourning the many heads that lie in the ground is themed around a harsh but unavoidable ritual that goes on endlessly to nowhere. 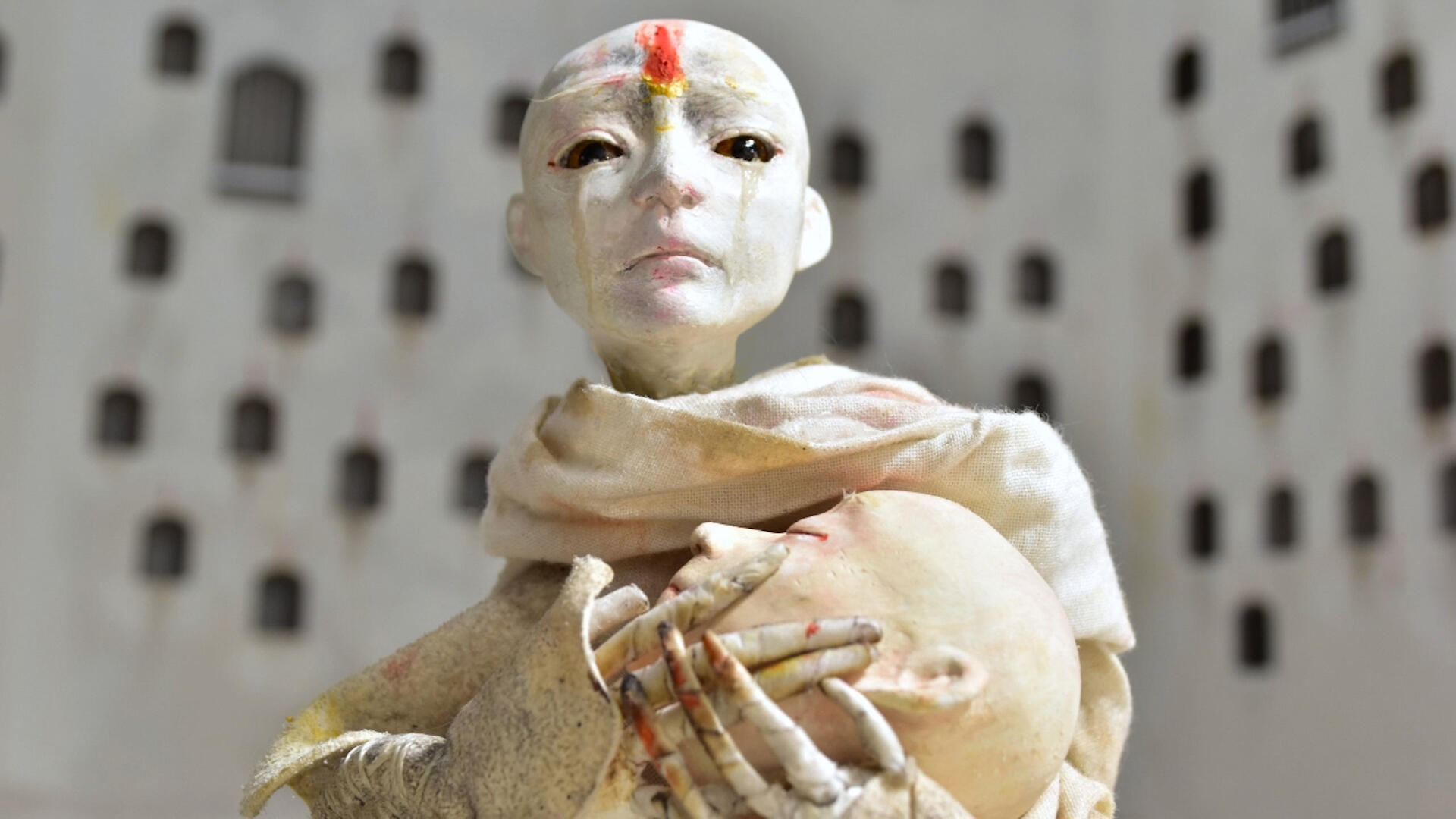 The dystopian image that has been so familiar to us can be said to be connected to the traces of people's activities.
Focusing on the city's metabolism of repeated scrap-and-build, Todo expresses the face of Tokyo, a metropolis that has changed its appearance while being buffeted by the stormy waves that have hit the city since its rapid economic growth period, in his works made of rubble. By placing laminated glass between the aged building materials such as concrete and bricks, the artist attempts to give a sense of the accumulation of time that has passed in the area, and at the same time, to give a new form to the image of the buildings that were demolished in the past. 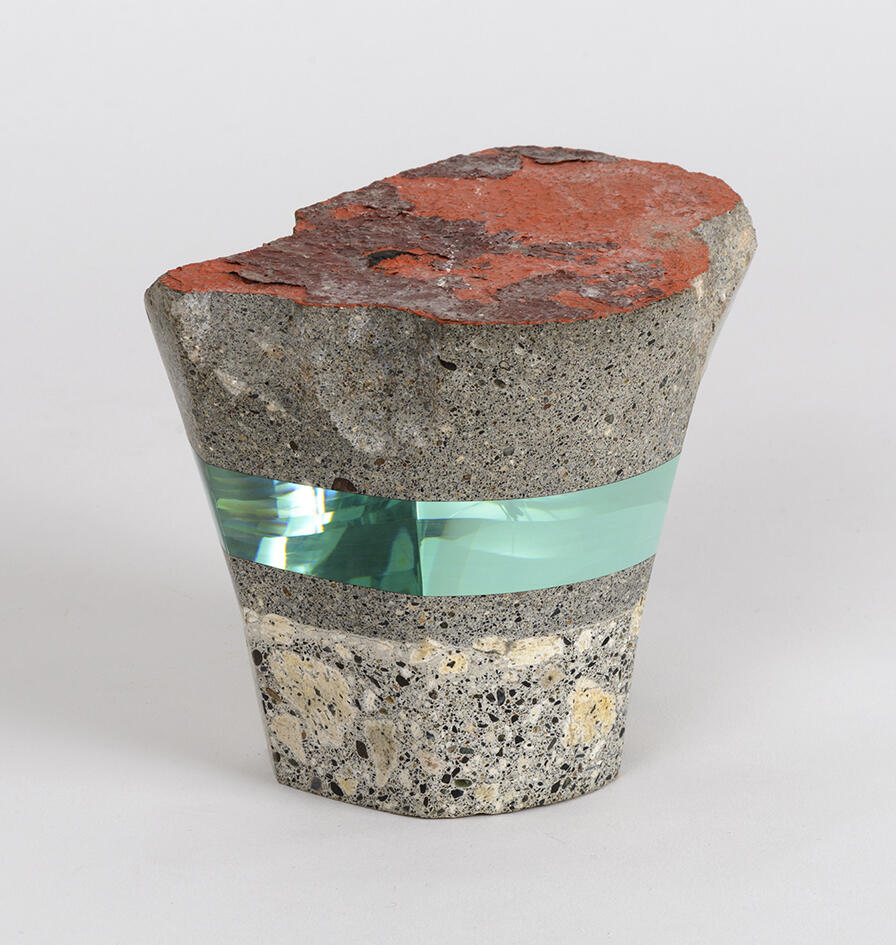 Hisaharu Motoda is a printmaker who also often deals with urban landscapes. He has created works in the form of ruins not only of Tokyo, but also of Singapore, Beijing, Dubai, New York, and other cities. Rather than being relics of the past in people's memories, they are in some ways a kind of future-proof map, capturing the landscapes of their time with a critical eye. The Metropolitan Expressway, which celebrated its 60th anniversary last year, has a truly metabolic element, with the old and the new constantly being replaced, creating an expressway junction that at first glance evokes a dystopia. Ruins can also be found lurking in familiar places such as Hakozaki and Edobashi. 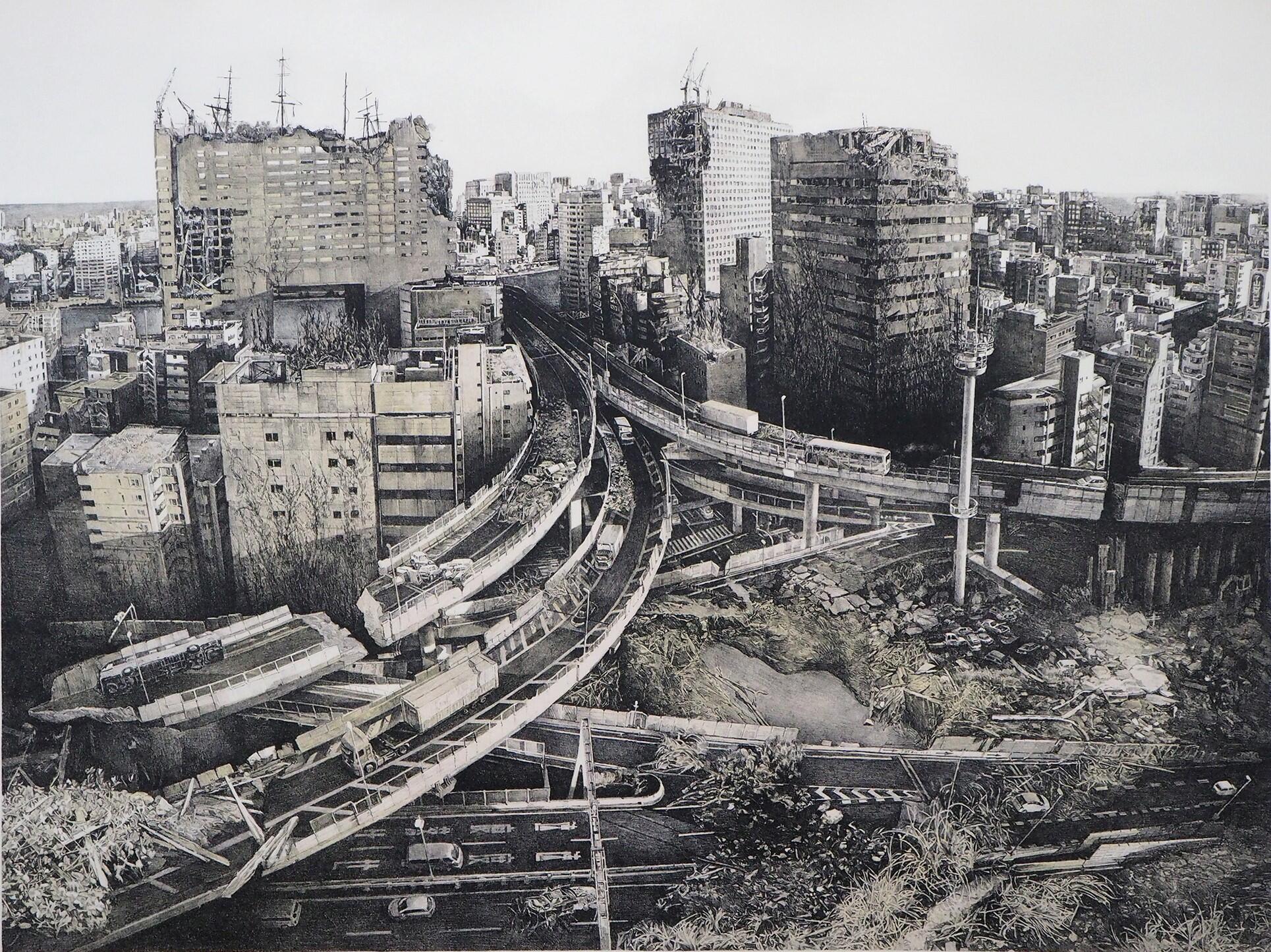 On the other hand, the world of abandoned houses depicted by Yuma Tomiyasu has a more personal and private atmosphere. Perhaps this is because Tomiyasu's works are more connected to dreams and memories she had as a child.
Tomiyasu said in the interview, "I must have always been afraid of heights, but I had such dreams when I was a child. I myself dream a lot, and I remember them. I also perceive things in my dreams. For example, when I eat something, it tastes good, or I hear a sound, or in some cases, I feel pain. In reality, when I wake up, I am not injured or anything, but I feel pain (in the dream). So I tend to make artwork based on the dreams I have." He stated, "I don't have a dream that I had. 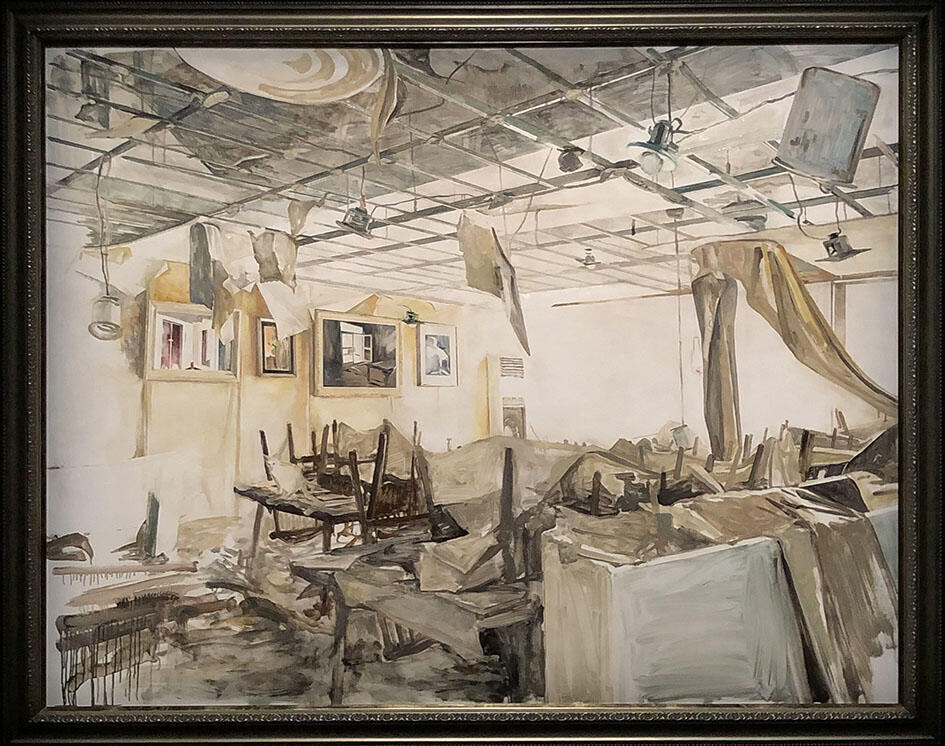 For this installation exhibit, Fatmi's "Maximum Sensation" combines the speed suggested by skateboards with a rug used in Islamic prayers. The work, consisting of 14 skateboards flying in the air, has a uniqueness that comes from something other dimensional. The artist explains that when he saw Afghan girls playing with skateboards, he was surprised to learn that skateboarding is a tool that can be used freely in an Islamic society where girls are often forbidden. Through such works, we can say that works that give us a glimpse of a frontier world and cultural bias are also a kind of dystopia. 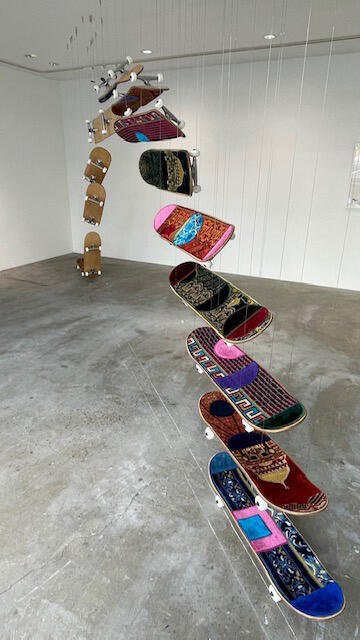 The Indonesian artist Eko Nugroho critiques the state of contemporary society in a clearer form.
The characters depicted by Eko, who are usually depicted wearing masks, seem to be depicting the situation of communication-less in an information-overloaded society, where the way people communicate these days has become skewed, and there are fewer opportunities to listen to others directly face to face or to express their opinions. According to the artist, masks and masks are a way to communicate with each other. According to the artist, what he wanted to express with the masks is a blank stare at the world, or a meaningless gaze. The artist's intention is to highlight the fact that the more democracy advances, the less opportunity there is for face to face dialogue between people, which is reflected in the word "CRISIS" written on the person's clothing. 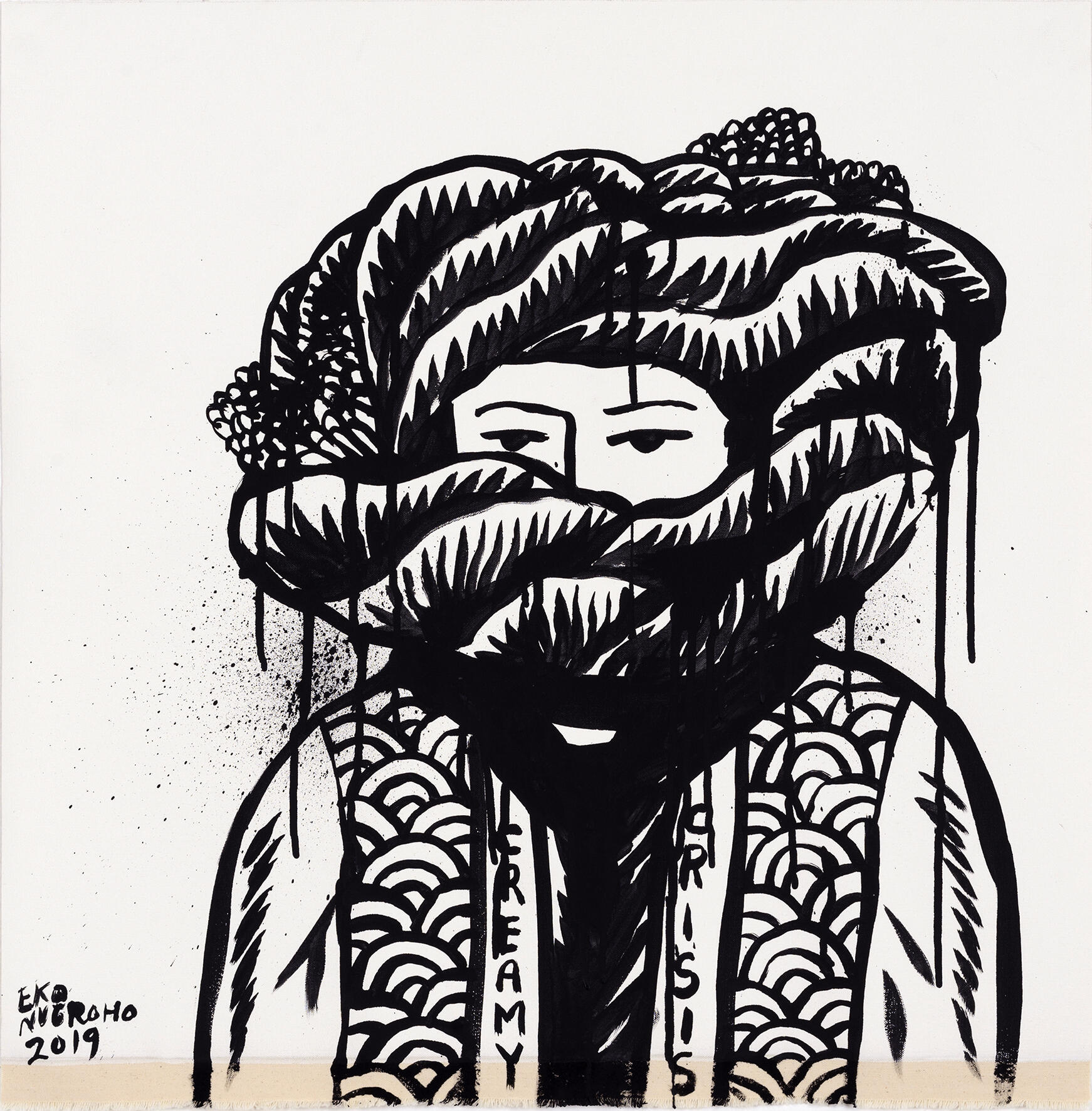 Kaneko Takanao is known for his paintings that visualize the monsters created by the revolt in today's information overload and the noise on the Internet, where fake news and anonymous slander have become problems in recent years. Kaneko's anonymity and unique humorous expressions were the focus of attention at last year's "2-Dimensional School" exhibition (curated by Miwa Kutsuna), which featured new trends in Asia. Kaneko's works were noted for their anonymity and unique humorous expressions. "As the Internet spreads throughout society and social networking services permeate our daily lives, we are forced to deal not only with its convenience but also with certain harmful effects such as slander, hate, extreme justice, and conspiracy theories that arise from anonymity. While it is possible to ignore biased information and transmission as "noise," Kaneko remains strongly interested in the nature of excessive noise that cannot be processed by humans.
The monster characters depicted in various forms express the duality of human nature that arises when exposed to such noise. Although the monsters are depicted as frightening with their sharp fangs and bared eyeballs, they are impressive in that they exude a somewhat self-destructive and comical quality. The film depicts the complexity of people who use different characters in the real world and the online world, and the way in which people's biased ideas are strengthened by the vast amount of information they are exposed to. This is a trend that is being positioned as a new trend in the world of social networking. 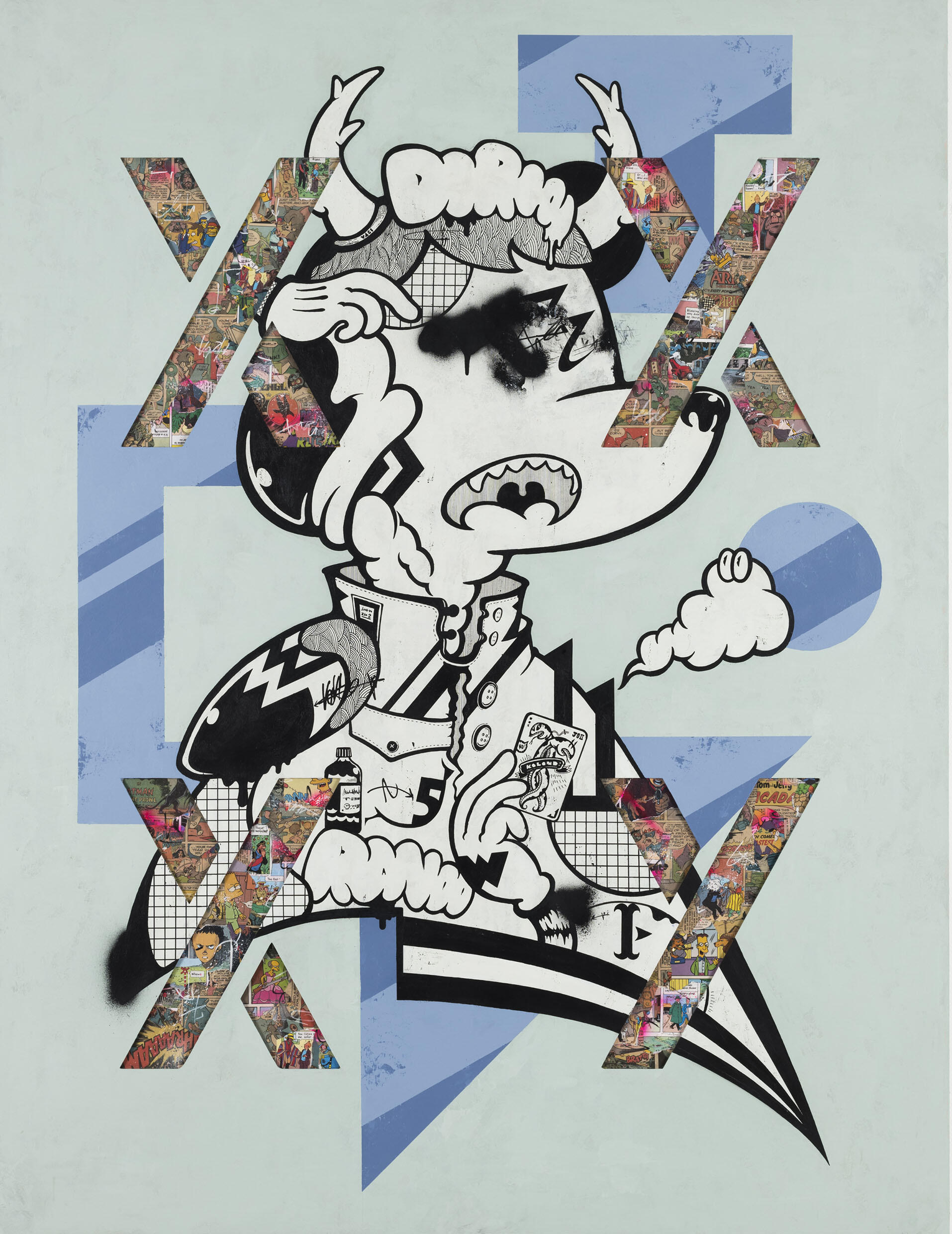 Russian artist Ekaterina Mromtseva, educated in the West, continues to send a message of halting the ongoing struggle through her artwork. The "Women in black against the war" series is dedicated to the silent protests of women dressed in black and holding white flowers, as if in mourning. These protests against the invasion of Ukraine took place in various Russian cities. Most of the participants were women. They have since been adopted by feminist organizations around the world to criticize the actions of their governments. In the photos of recent Russian protests used in these works, the heads are often cut off so that authorities cannot identify the activists. Because the use of the word "war" is forbidden in Russia when discussing the current situation, protesters hide this word with an asterisk or other slogan, calling for peace.
The artist says, "I created these works to share my belief that it is possible to speak out against injustice, to change the tragic situation. I stand in solidarity with all those who have the courage to protest war in any form." She stated.