Adel Abdessemed "Play it Again" vol.3 : Humor in some of the works

As we have seen in previous articles, artworks of Adel Abdessemed allow various possibilities of interpretation. "Sense of humor" may seem to be in contrast with his ordinary subject of violence or cruelty, which might nonetheless pass through many of his works.

Surely the history of men has proved the important role of humor as incubator of "hope". Humor, according to Victor Frankel who survived Auschwitz as psychiatrist, was the only and last concept to save the people from the despair when they had no symptom for survival. 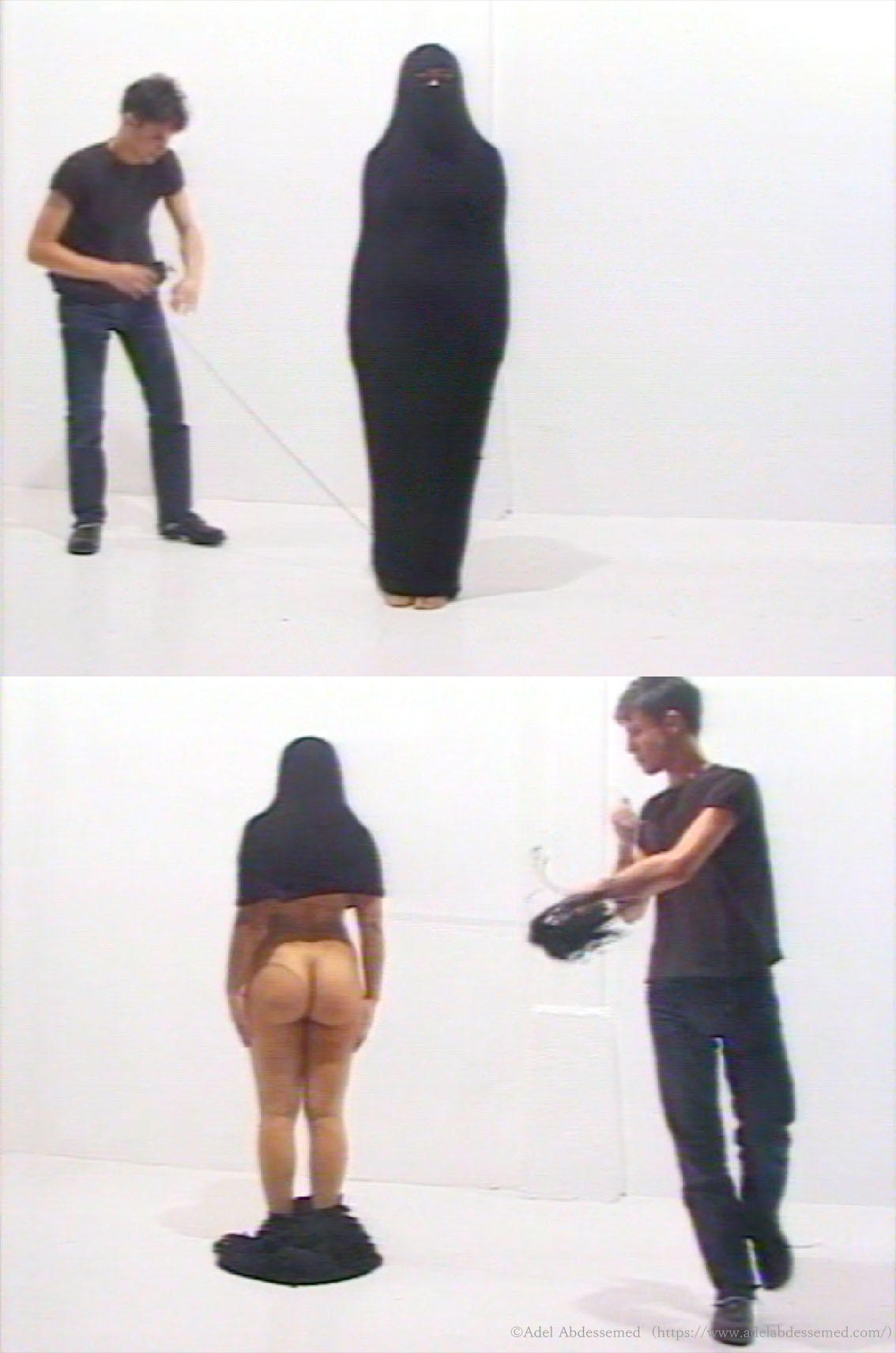 
We first present Adel’s works with “visible humor” followed by those with “invisible humor”, the sense of humor hidden beneath the pessimistic appearance expressing difficulty in the society. In an early video, for example, the artist evoked the transformation and liberation from the “covering” to which woman’s bodies are consigned through the act of unrevealing the yarn as a performance in Paris, 1999. The Moroccan woman’s nudity may appear as epiphany for a body previously hidden by religious taboo or cultural constraints. 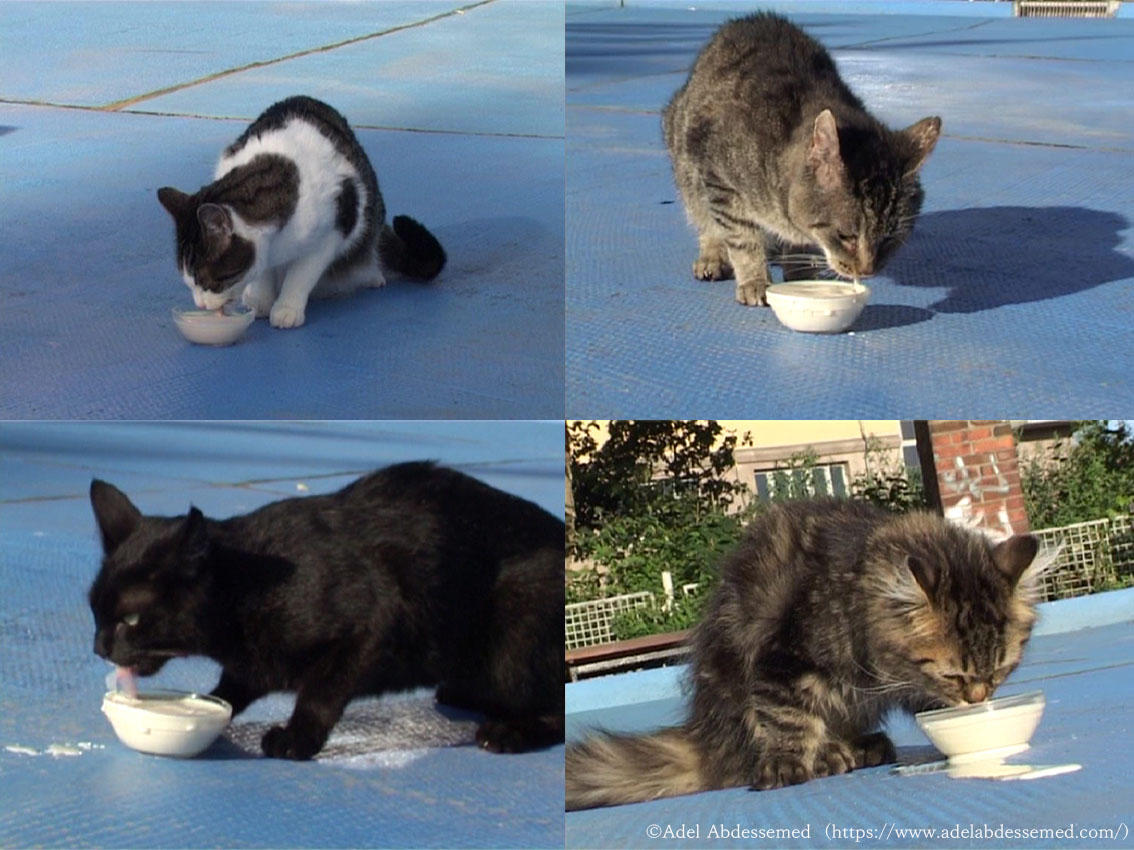 
“Happiness in Mitte” was first exhibited at the inauguration of the Mori Art Museum, Tokyo in 2003, featuring seven street cats hungrily sipping milk placed on blue floor of an empty padding pool. The title refers to the feeling of happiness produced by the unexpected satisfaction of an instinctive need. Mitte is the area where the artist lived when staying in Berlin.

Another work of cat “Un chat noir qui passe entre nous” is totally different from above mentioned cats, since this is just a cat entering the studio in the night. The cat is a mysterious presence completely on its own, which can be considered as a humorous fragment. 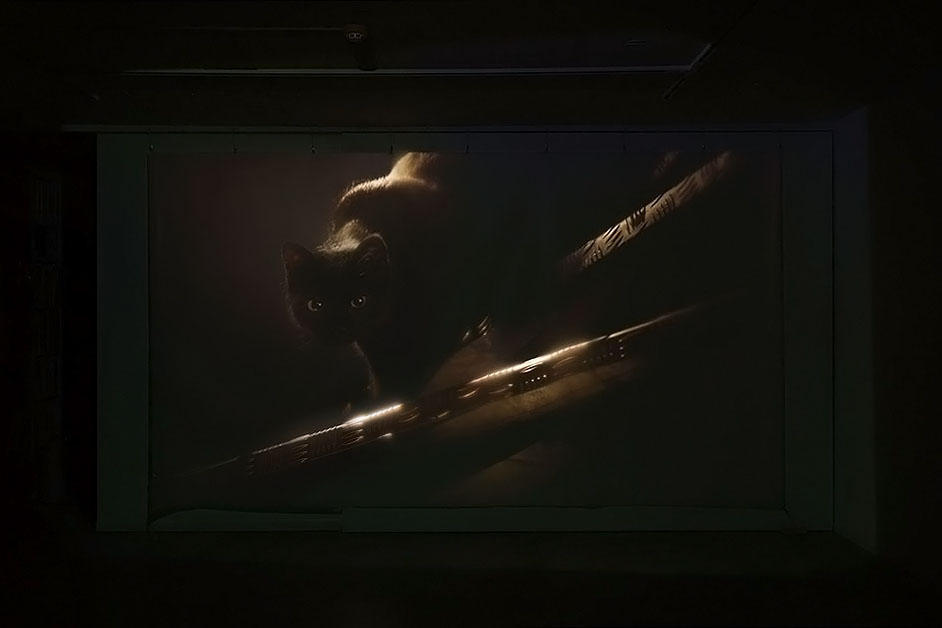 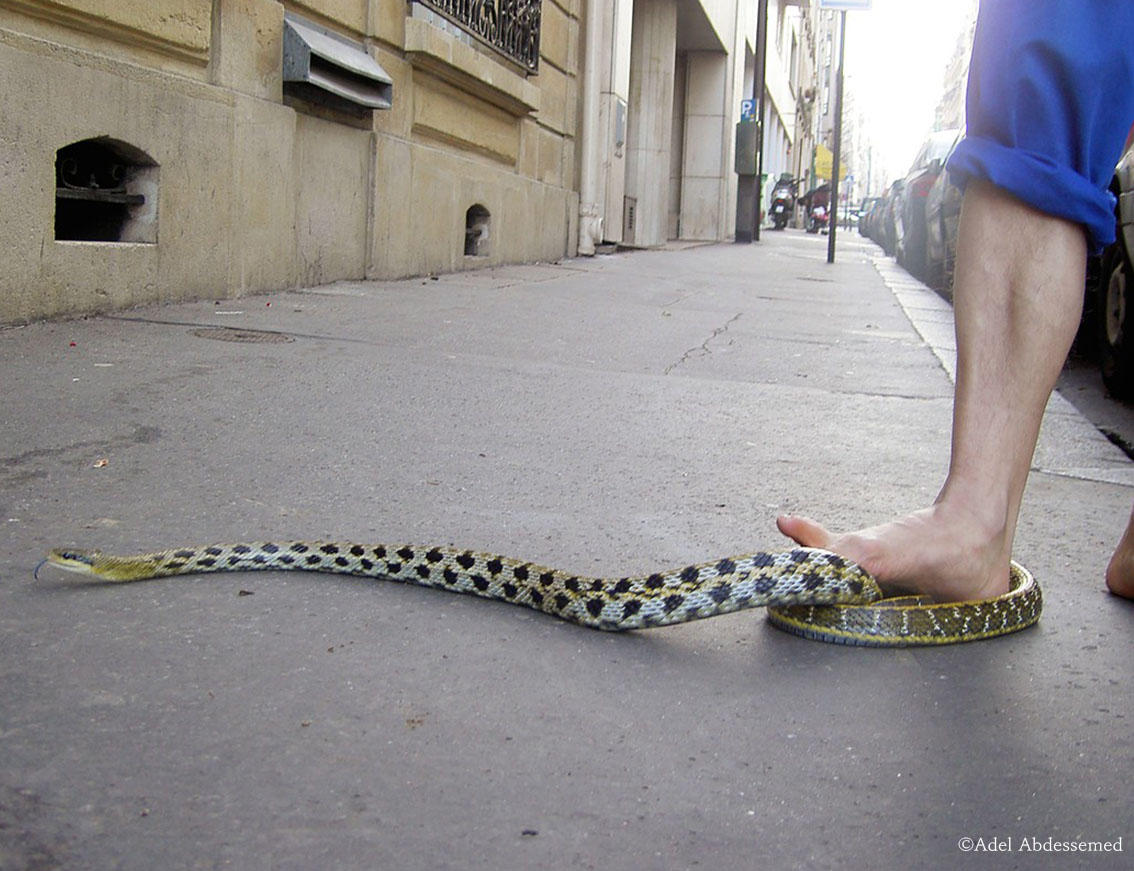 
Not only videos but also photos refer to the unexpected encounters of animals with the artist: extraordinary lion, herd of boar or even snake. On the street in neighborhood of the artist, Adel appears to crush the snake beneath his heel, or to wrap around his neck in casual style. Here snake seems to be transformed from the symbol to evil to domesticated creature. Mother of the artist has also been the subject of his work. The work “Nafissa”, where Adel is held by his smiling mother, alludes to the iconography of a Pietà in Christian art. By reversing its significance of pieta or grief, it celebrates life and fundamental bond. 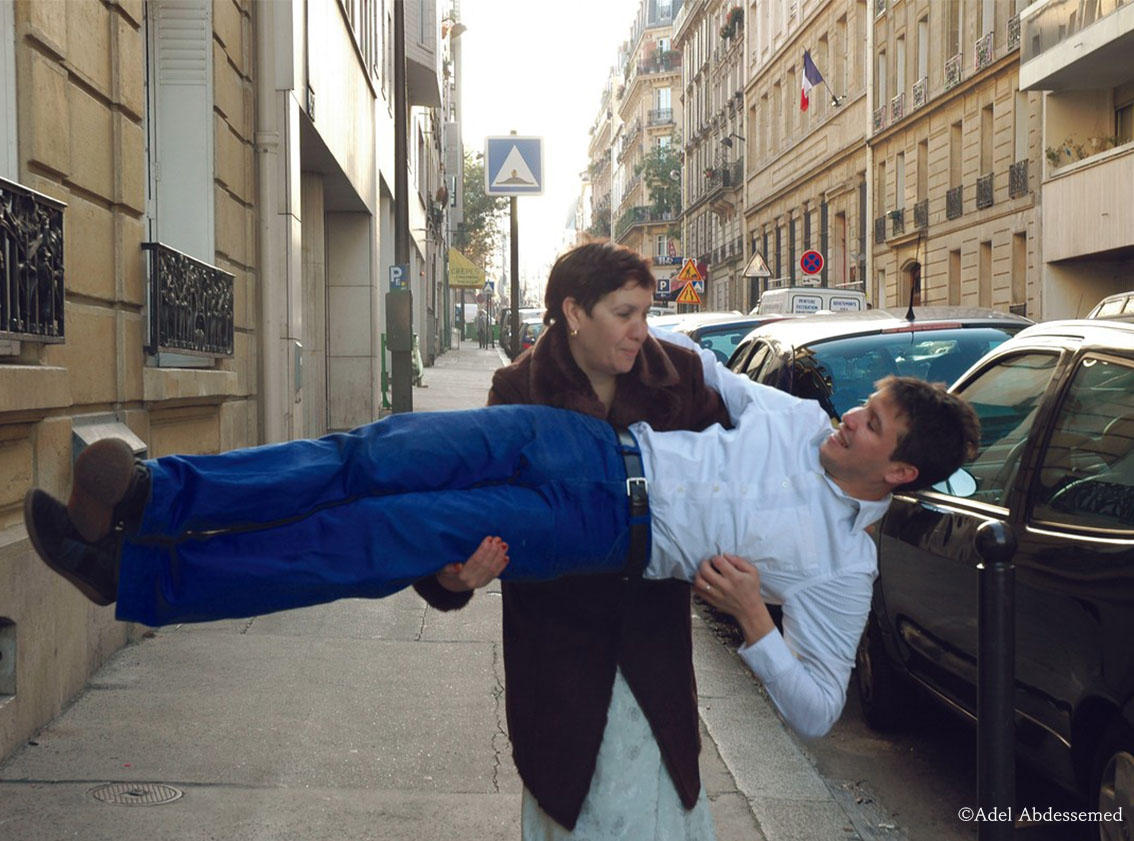 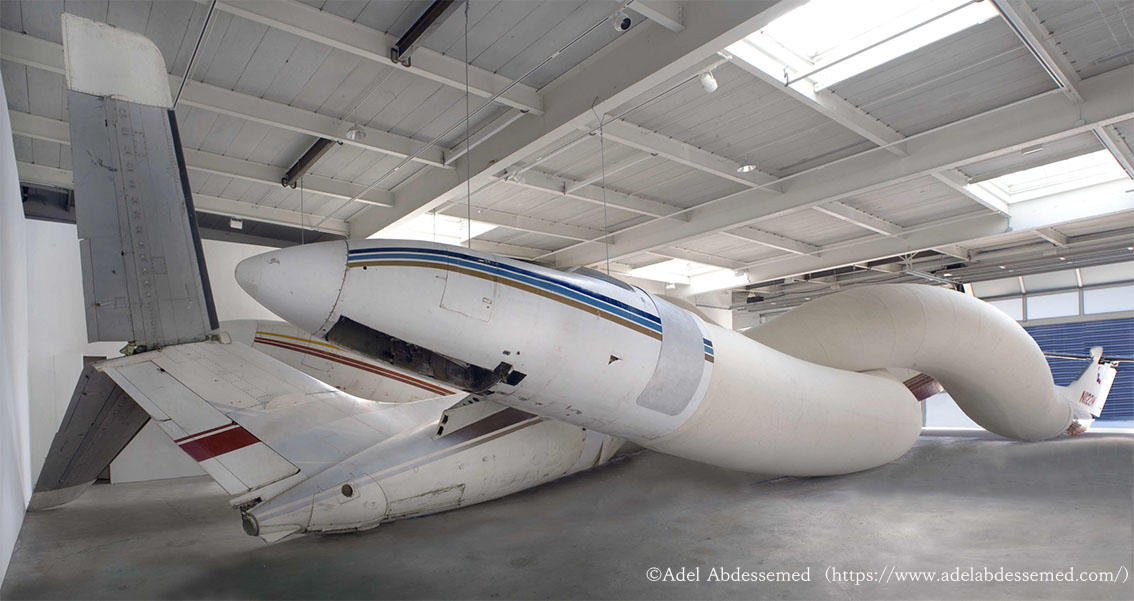 
“Telle Mère, tel fils” is a large installation weaving together bodies of three air-planes whose original cockpits and tails have been retained, while the fuselages have been replaced by air-inflated felt. Its intertwined pose recalls “The sleepers” depicted by Gustave Courbet or Baroque sculpture, manipulating elements that compose the material reality of an air-plane, yet also evokes fantasies of flight and freedom. According to the artist, it is a transposition of his mother’s art of folding thin sheets of pastry to make sweets. 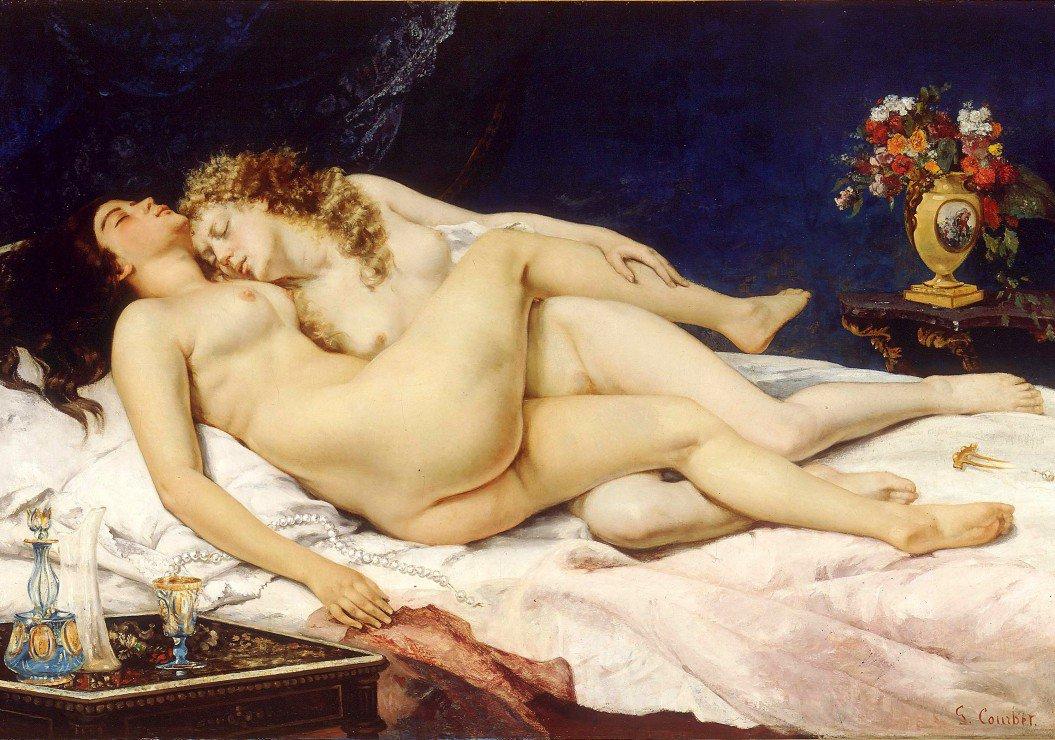 
As we have seen above, Adel seems to speak for not only “visible humor”, but also for “invisible humor” through his works and performances. It is generally accepted that the artist expresses drastically human antagonism or grief by means of current materials, especially tackling religious, sexual, and political taboos against social issues or difficult situation. However, the works of Adel can be viewed from standpoint of “humor”, if we analyze some works decomposing into fundamental elements to rebuild them up again into the structure generating humor. There we will see the unexpected relationship between the works and deep sense of humor. 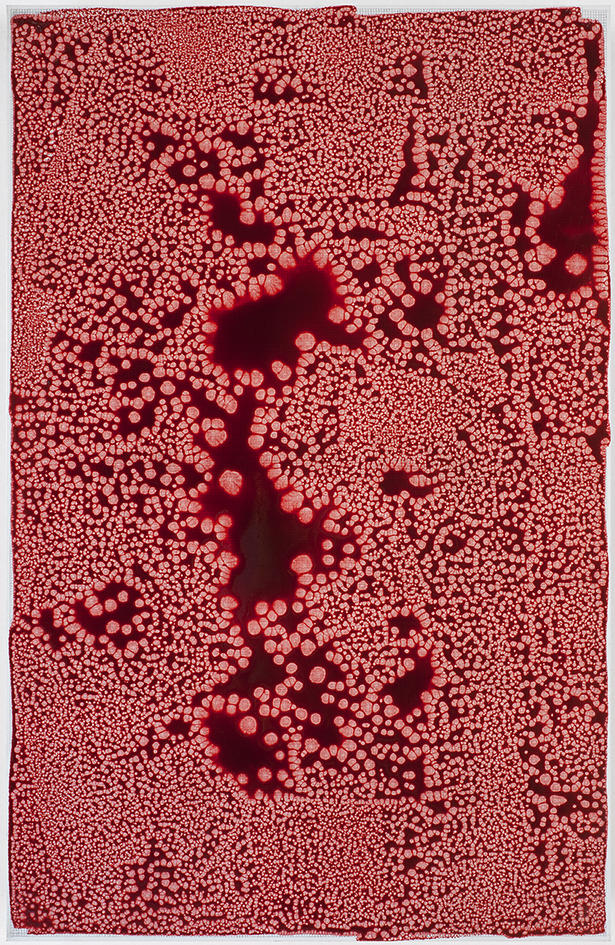 
For example, when we see “Forbidden Colours” where fake blood used in cinema was applied onto canvas, our reaction will naturally lead to a feeling of metaphor of tragedy or cruelty behind the scenes although the material itself is a fake or imitation of the reality. On the other hand, we find a kind of beauty pursuing such visual elements as colour or texture. This impression is especially appreciated and even exaggerated, through its repetition and proliferation, when this series are exhibited in multiple number. 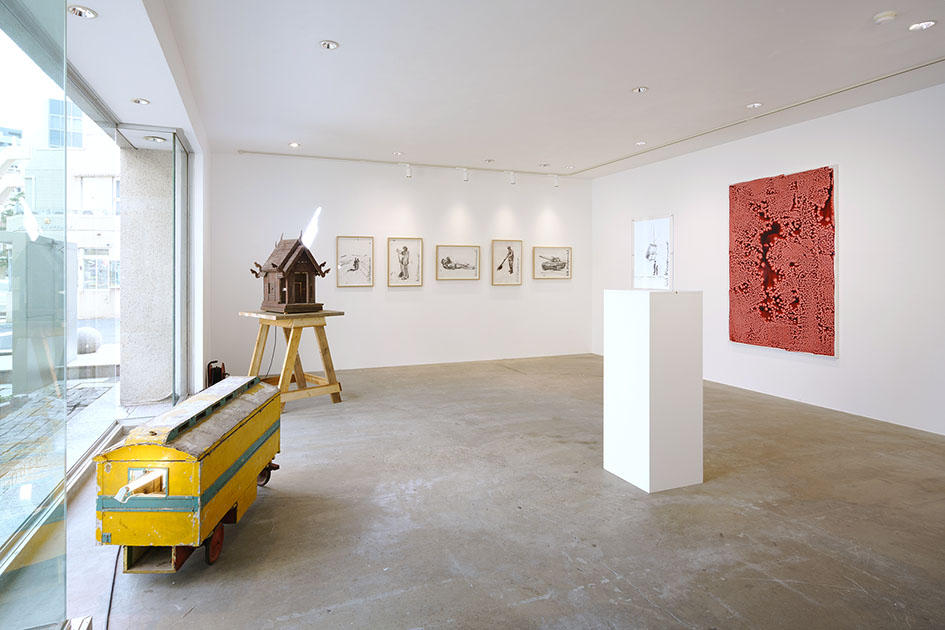 
Among the works in the past, some seem to have been created with the intention of such elements which could be interpreted as fundamental elements of humor: “Coup de Tête” may have been an example, famous art piece depicting Zinedine Zidane heading during World Cup 2006. There should be, however, depending on different positions of the people, various interpretations to this work. 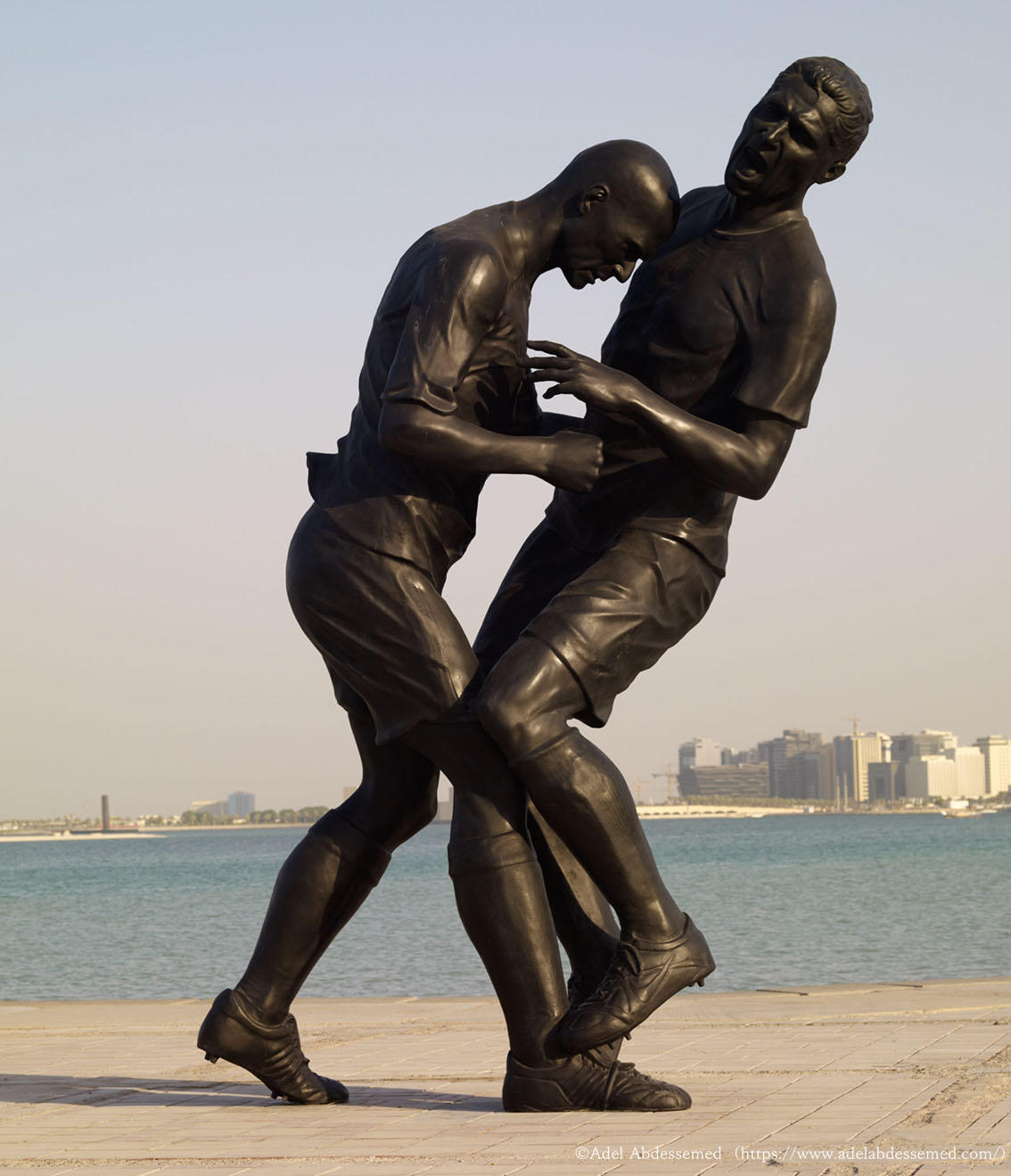 
This work looks like a dynamic sculpture of human body by Rodin or Bourdelle at first glance, whereas in fact, it is a crystallization of the accidental moment of football game given by Zidane. This bronze sculpture, displaced from its original venue and time, seems to integrate all the factors for roots of humor, and to have been realized with all the technique generating humor. At the same time, it might be an artful or subtle device given by Adel, since this type of “humor” cannot be acceptable for those fans who admire Zidane. Black joke or not joke, it depends on the feeling of viewer.
It seems that Adel produced this work without any referential meaning, simply plasticizing the facts which happened in reality. He thus fends off audience’s expectation to decipher the meaning to criticize the artist’s attitude.
Moreover, Adel provokes this anecdote to realize it as a kind of parody by the people, of which whole process may be understood as a sense of humor. In other words, an ambitious analysis based on highly intellectual information can reveal another charm of the artwork which used to be positioned in contrast with humor.

Works of Adel Abdessemed thus testify the infinite possibilities of interpretation, and of appreciation from various angles we can imagine.