"Things Entangling" is a special exhibition co-curated by Museum of Contemporary Art Tokyo ("MOT") and KADIST Art Foundation ("KADIST") based in Paris and San Francisco. The exhibition features artworks by twelve artists and groups responding to an overarching theme of a relation to various "things" that cannot be separated from daily life. While this exhibition has been postponed for a period due to COVID-19 situation, KADIST has produced a promotional video based upon Isobe's exhibited work "Wind Direction Undefinable". In this article we would like to introduce a commentary on this work, as well as Isobe's recent movements.

Feature Column: "From "Earth Day" to "Echigo-Tsumari Art Triennale"
Artist Yukihisa Isobe's perspective on environment and humans in the world amid the pandemic"

"Things Entangling" features artworks by twelve artists and groups responding to an overarching theme of a relation to various “things” that cannot be separated from daily life. Those works highlight the traces of change and movements that have been brought by such “things” connected to a certain place and time, including materials, living creatures, and the carriers of meaning, value and memory. The exhibition was scheduled to run from Saturday 14 March to Sunday 14 June, but has been postponed for a period due to COVID-19 situation. KADIST has produced a promotional video based upon Isobe’s exhibited work “Wind Direction Undefinable”. The movie follows an arrow, symbolising the wind direction, extending freely and spinning through the names of participating artists and people involved with the exhibitions. 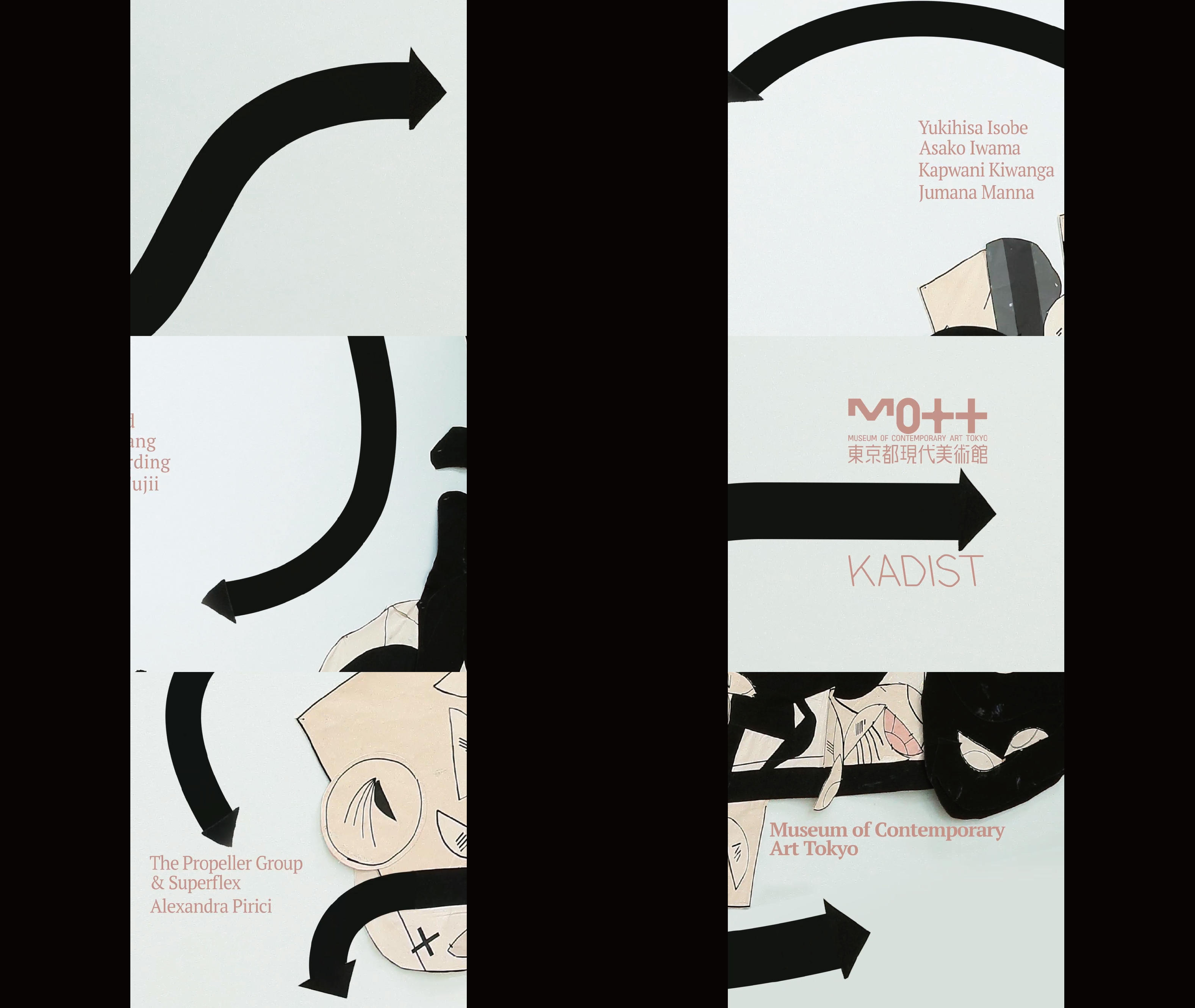 the sequence of the video “Things Entangling” （click here for viewing）

Isobe suddenly moved to America in 1965 just as he was developing a reputation as a promising and upcoming artist with the potential to lead the future of the Japanese art world. Instead, he experienced the emergence of the fusion between art and technology as well as the rise of environmental consciousness in America. After a number of experimental attempts using architectural structures and air as well as co-producing large-scale events, he studied “ecological planning” (an approach to land use planning involving minimizing burdens on the environment), on which he concentrated for a long time. "Wind Direction Undefinable" is an artwork created in 1996 for “Ecological Context”, his first large-scaled solo exhibition (held at P3 art and environment), when he resumed creative activities after a quarter century of artistic silence. This 5m-tall and 4m-wide work is composed of vertical and horizontal parts to form the letter “L”, however only the vertical section of the L was presented for the exhibition in 1996. 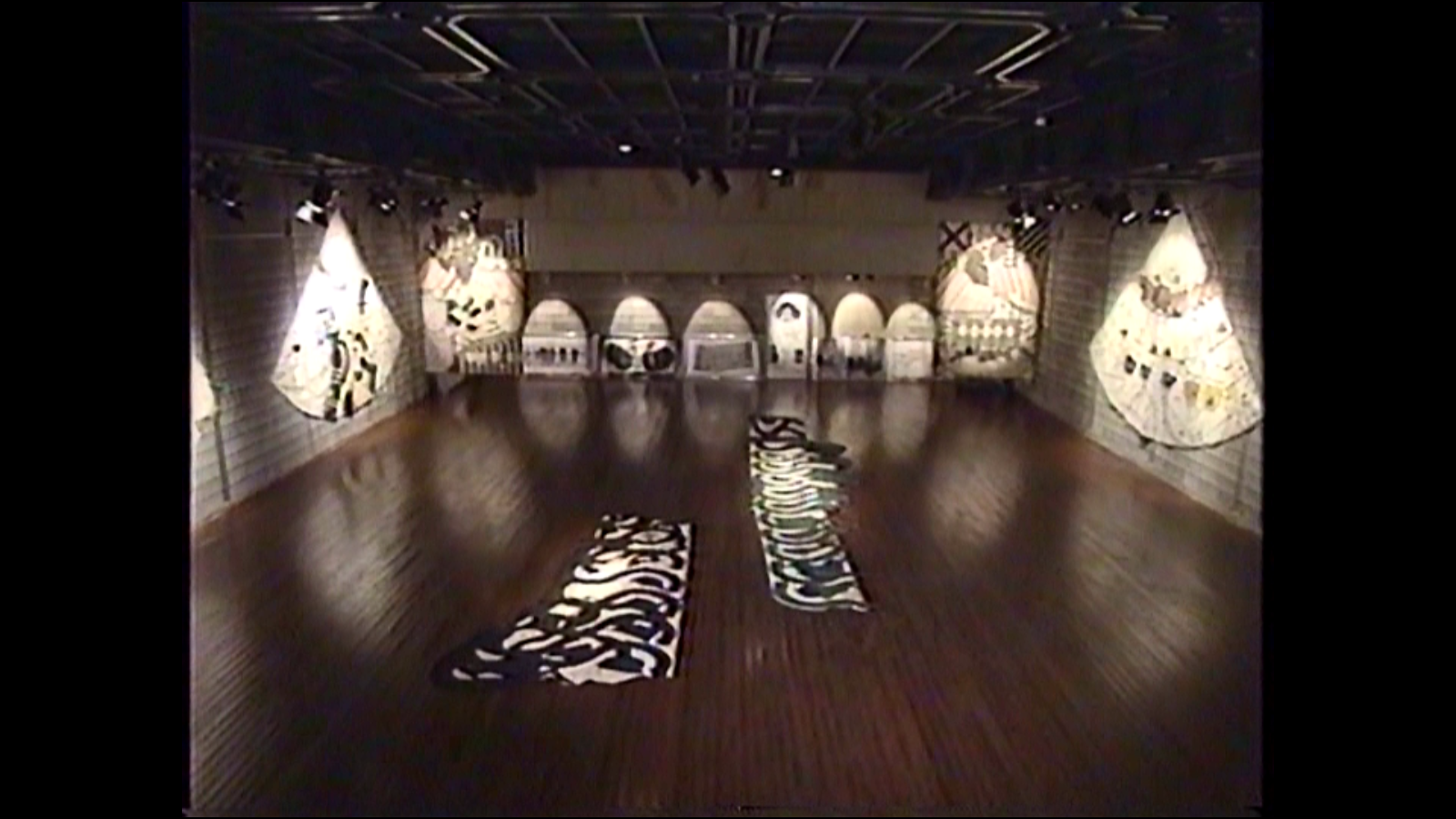 Snapshot from “Ecological Context” exhibition at P3 art and environment (courtesy of “The World of Art: Yukihisa Isobe” on NTV, aired on 5 May 1996)

The work has been assembled through putting together pieces of fabric in different shapes. According to a contemporary interview (“The World of Art: Yukihisa Isobe” on NTV, aired on 5 May 1996), he sought to put himself in an “inconvenient situation” when he re-engaged with artistic endeavour by choosing to use a fabric that was an unfamiliar material to him, in order to avoid creating artworks that might constitute an extension of the “routine” of his creative activity from the 1960s. While creating the work he reconstructed an ecological perspective representing that which nature enfolds, by deploying abstract signs, technical terms and data responding to what the venue of the exhibition, “P3 art and environment” advocated. 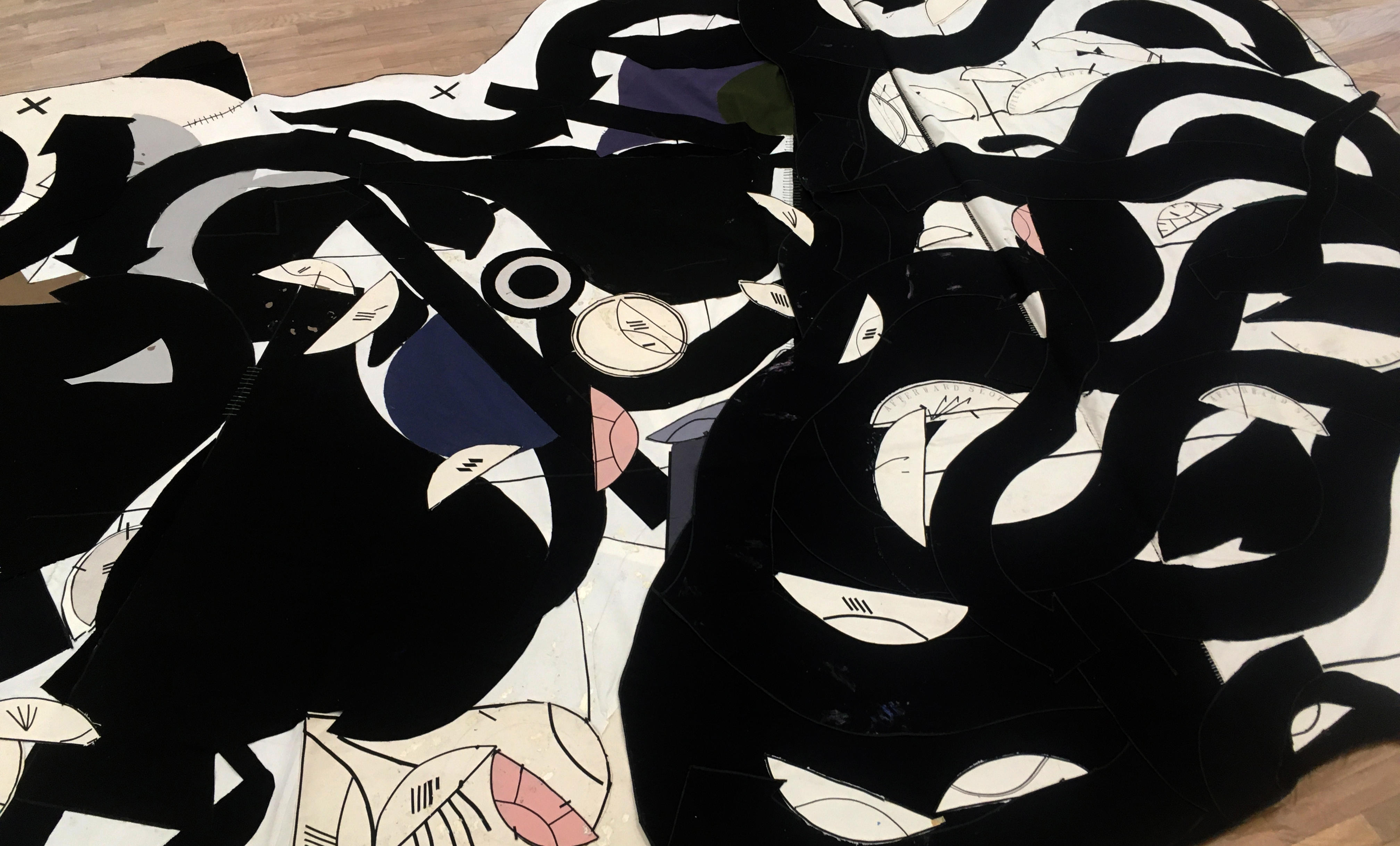 “Wind Direction Undefinable” is not at all grounded on scientific evidence based upon measurements and analyses, as is done for ecological planning, nor is it like the series of works presented for Echigo-Tsumari Art Triennale, which accurately visualised the trace of geographical transformations due to changes in the environment. However, what is common to Isobe’s approach in any period, including this work, is his “romantic” perspective to ecology. According to Isobe, ecology has strong artistic element rather than being a pure science, as it incorporates the human longing and dream of adapting to nature, as well as philosophical and ethical perspectives. Takashi Serizawa, the director of P3 art and environment and who organised “Ecological Context” exhibition, once worked as a student for “Regional Planning Team”, a company conducting ecological planning headed by Isobe. He describes the consistency of Isobe’s activities up to the present as follows:

"He has been trying to reveal invisible relations in this world by making use of his favourite signs, including patches, arrows and parachutes, as if visualising the concealed network of aquifers through the power of creativity. The repetitive patterns, flows of wind and historical topography that had disappeared now re-emerge into sight. In other words, what is revealed there is the appearance of this world as a system. Yukihisa Isobe has been trying to comprehend the world in this way. "
“Directing imagination towards the world” by Takashi Serizawa, “Landscape – Yukihisa Isobe: Artist-Ecological Planner” edited by Naoko Seki and Mihoko Nishikawa (p27, MOT, 2007) 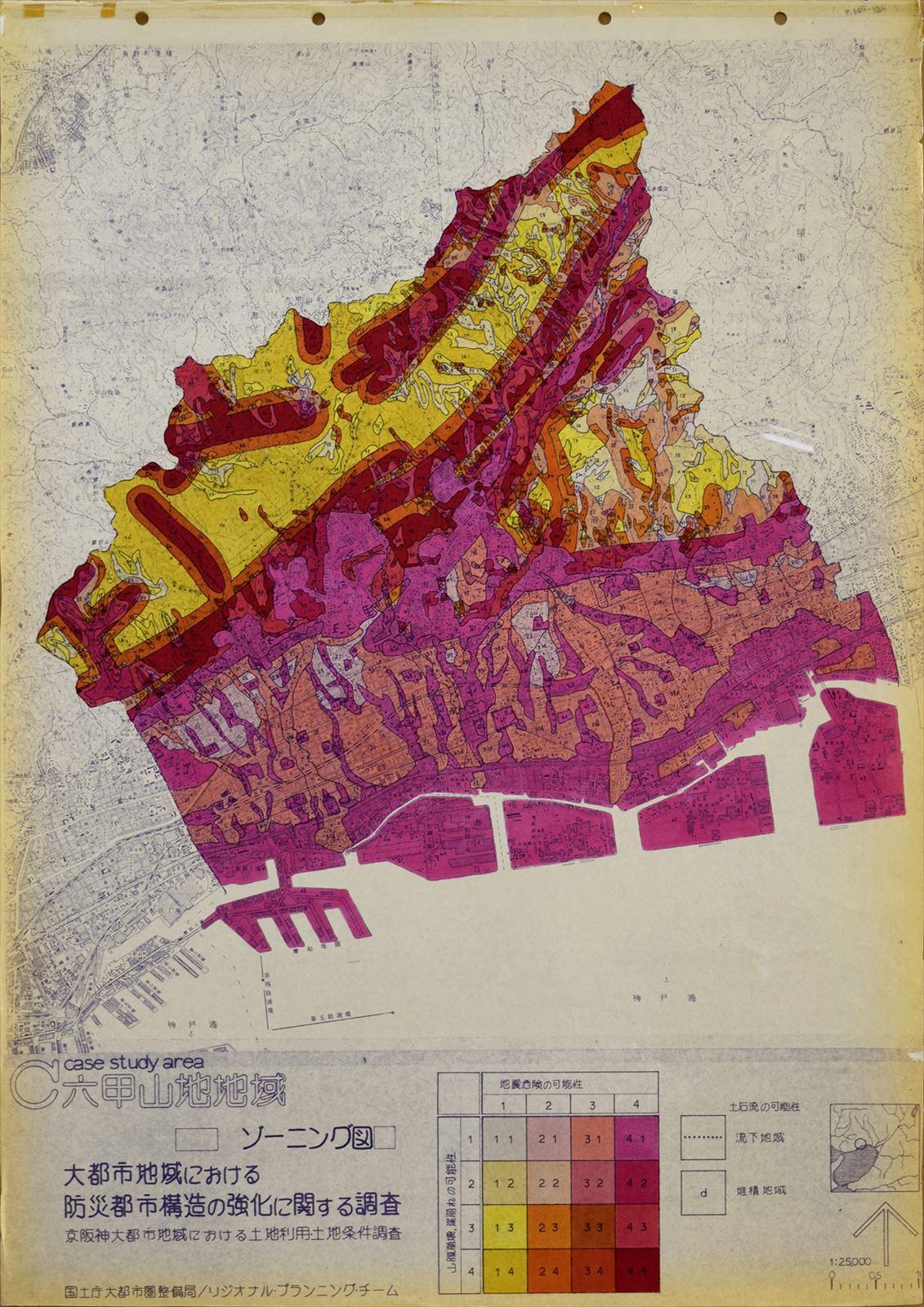 “Disaster Prevention Urban Structure Strengthening Plan Formulation Survey in Large Cities (Rokkosan Mountain Region)” conducted by Regional Planning Team, commissioned by National Land Agency 1980. It should be noted that the survey indicated the possibility of an earthquake risk in the Rokkosan region fifteen years prior to the Great Hanshin-Awaji Earthquake.

Watching the video footage by KADIST again after having read Serizawa’s remark, the vector steadily proceeding at constant speed starts to look like a history of Isobe himself as he openly addressed his interests in each period. Looking back, Isobe was already directing his attention to “systems in the world,” such as atmospheric movements and the flows of cloud and water, when he participated in the “Demokrato Artists Association” in the 1950s, and produced countless number of prints and drawings as he went through stupendous trial-and-errors. We can recognise his attempt to reconstruct such systems symbolically and abstractly. “The Potentiality of Drawing”, another exhibition to be held simultaneously with “Things Entangling”, presents the drawings by Isobe which illustrates his vision regarding the past and future of water of the rivers and oceans.

While almost all of the events such as Ichihara Art Mix that he was scheduled to participate have to be postponed due to the unprecedented disaster of COVID-19, Isobe is filled with an enthusiasm for creating works which reconstruct and visualise the integrity of environment and regions. For the Northern Alps Art Festival in particular, amongst all the projects suspended, he has been planning to create an evolved version of “Wind Direction Undefinable,” for which the title is to remain unchanged. It will be a large-scale work shown on the plain field of 150m x 300m at the bottom of the Nanakura Dam, one of the few distinctive rock-filled dams using natural stones. Here he conducted an on-site survey and analysis of downdrafts and updrafts blowing along the dam slope and reconstruct the traces of these wind directions using his symbolic expressions. Although it is likely to take a little longer for each of these projects, including the exhibitions at MOT to re-open, let’s enjoy this video footage while looking forward to seeing these works, as we hold expectations for Isobe’s future endeavours.