Art Front Gallery will present one-man exhibition by Miyuki Takenaka.
For more information on the artist's profile and works, please kindly check the artist page linked below.
This exhibition will be the first time in 3 years after “Soft Scenery” in March 2009, as solo exhibition at Art Front Gallery. Many years before and after the exhibition, we have watched Takenaka’s artworks and their changes. Takenaka captured a moment that form of seed and organism spread or a moment just before those started spreading, and drew them on a panel. The instance she captured appeared to be a very long moment. For example, she draws a seed which is about to sprout. We cannot tell when it starts stretching out. How long do we have to wait? Her painting gave such gentle but stiff impression, and she seemed to be conscious about empty space. Same as works of panel, we also received soft impression from works of resin by light and shadow spread over a space. Though certainly there was resin as solidified substance, as an artwork, it was not resin but that of showing light and shadow which was not existing from beginning, Alike watercolor painting of seed drawn on paper, it should be the works to make viewers imagine not what was drawn but something that was imaginarily produced in our mind because of its space.
At the time of group exhibition at Art Front Gallery in last summer, her style changed. First of all, two different styles till then, watercolor and resin became integrated into one artwork. Also, she started adopting brand new materials or three-dimensional works. Besides, more complicated and multilayered combination of resin and other materials made resin itself appear clearer. Combined with light and shadow, which did originally not exist in artwork, materials or the artist’s working itself become important element of her work. It is apparent that her artistic style has outgrown. As you can see in the artwork exhibited at this year’s “VOCA” (exhibition entitled “Vision of Contemporary Art”, see image above), a glimpse of excess which was spread over a picture created by complicated layers and entire picture has been arranged nowadays. Though she might express her internal feeling even on a large panel, Takenaka seems to take an indication of people and air existing outside of the work into her work actively. It is no longer what viewers imagine from her empty space. We, viewers, even start capturing the artist’s movement and tension. A seed was sown years ago. The bud has just started to sprout at this moment. 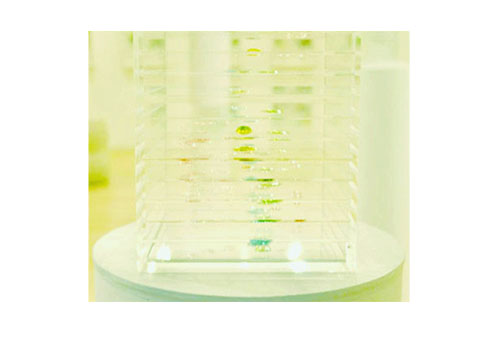 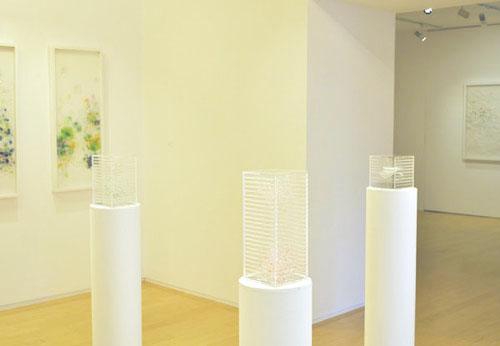