Art Front Gallery will present solo exhibition of Tokuro Sakamoto.
For more information on the artist's profile and works, please kindly check the artist page linked below.
A style of Sakamoto is truly unique among various artists who have studied Japanese painting. Contrary to most of them usually using materials peculiar to Japanese painting, Sakamoto has been painting with acrylic pigment. Besides, he does not choose landscape or beauties of nature which are familiar in Japanese painting, but everyday life very close to us as his motif. He especially prefers to present scenery with electric wires, modern housing, highway, and amusement park which are too ordinary to be depicted in a picture in general.
Japanese paintings, in terms of classification in art, was established just to distinguish itself from Western paintings when the latter was imported to Japan. There basically should have no difference between the two as “paintings”. As it may be difficult to explain what Japanese painting is especially to non-Japanese, perhaps there is no need to introduce Sakamoto’s artworks as contemporary Japanese paintings.
The reason why we still see influence from Japanese painting in Sakamoto’s work owes much to its composition. For instance, there is a branch of tree stretching in front of wide distant view as if it is breaking the quiet scenery, or he sometime dynamically arranges objects among quiet empty space. Such balance of distant view and short-range view is, as the artist says, based on works of artists of Edo period including Hiroshige. Sakamoto also shares the common daily life motifs with those Edo masters. On the other hand, still, the impression of Sakamoto’s artworks are quite contemporary. This may be because that while the motif is taken from daily scenery, the viewers feel that the artist is keeping a distance away from the daily, objectively seeing the contemporary life with certain coldness.
Another important element of Sakamoto’s works is absence of human. Nevertheless, we actually feel its existence, and such sense is probably derived from existence of “someone” who are watching the scenery. In contrast to the works gently focusing on details, such as recent “Night View” series, this time, Sakamoto present works focusing on theme of “distant view”. Moreover, a number of drawings which he has drawn daily are also in view. At this exhibition with new works, no one will exist in depicted “distant view”. Even so, we would like viewers to see his painting with being aware of such sign of someone who are watching the empty landscape. 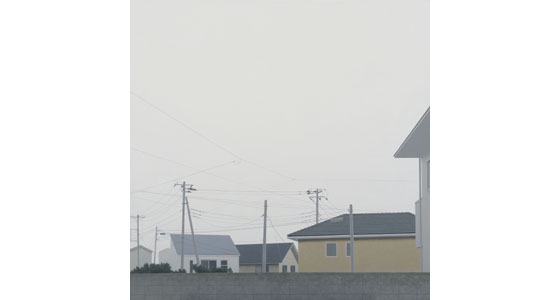