Art Front Gallery is pleased to announce the solo exhibition by Takako Azami.
The Takako Azami’s artistic focus is consistent: she observes trees. She draws and reconstructs them using faint lines and stained dots on a picture plane. Their branches bend like joints carrying leaves, stretching in a single direction, then stopping and turning the other way in search of more light. This is how she observes them. Trees grow taller than people, and we pass under them, noticing how they take different aspects depending on the light and how they profile against the sky. Azami also wonders how trees look at night. As black moonlit silhouettes, they seem like mere lumps. But Azami’s meandering ink-strokes show why we should look at trees at night too.

At Art Front Gallery we were preparing a solo show of Azami’s work when the earthquake hit on 11 March, 2011 ? as those of us involved cannot forget. We continued working for several days through aftershocks. The opening was scheduled for 15th, but transport was not back to normal and various places in the city were dark because of reduced street lighting. Under such circumstances we considered postponing, but in the end decided to go ahead. We all remember the artist working on her nearly-finished pieces in the dimly lit space.

The present Exhibition shows Azami’s trajectory since that time. Important are her views of night-time trees. She says it was when power was off after the earthquake that her attention was caught by the completely different appearance of trees in strong moonlight. “Trees look charming when glittering in the sun, but at night they can seem frightening; they rustle and seem to breathe quietly. When I set out to observe this, I began to see their intrinsic colours more clearly than in daylight, and I realised that trees have unexpectedly versatile expressions in moonshine or under street lights.”

What kind of change did this bring to Azami’s work? Her method is to stain the reverse of the paper. Hers is an inverted world created from the back. When drawing from the front, an artist adds the finishing touches last, but when working from the rear, they go the other way, and what the viewer sees nearest has actually been done first. The work is created from the front to the back, the opposite of normal painting. This can be clearly detected in the way ink oozes to the surface. Reapplying pigment is also impossible in reverse-painting.

This Exhibition reveals pictures full of tension. We sense what the artist calls trees “rustling,” and their constantly-changing appearances as they sway in the wind, altered by the fall of light. Azami’s trees have more life than the fixed things people routinely imagine. A multiplicity of trees becomes a mass and it emerges on the surface of Azami’s work with great forcefulness. These clusters dominate her paintings. However, the trees that Takako Azami paints are more than mere objects of depiction, for they have actively shifted the artist’s own viewpoint. We, as viewers, will find this happening to us too.
Art Front Gallery, Toshio Kondo 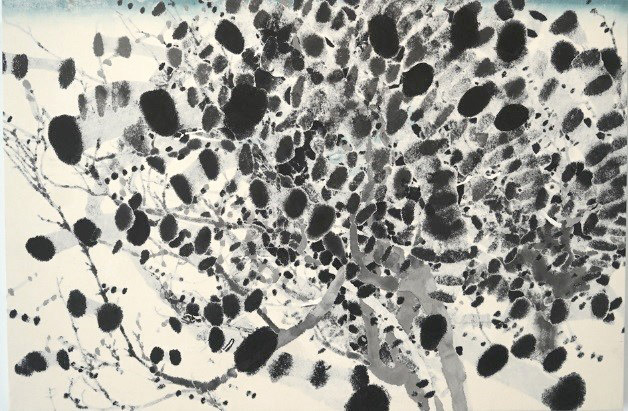 Ｃｏｍｍｅｎｔａｒｙ of A Tree of Japaneese Pepper, Evening

Seen from the distance, paintings of Takako Azami present structural power in their composition. Depicted trees are all exists in the garden of the artist including pine, bamboo, Japanese pepper and Nishikigi or Euonymus alatus. These trees show themselves differently in different times of the day, of which the artist grasp the essence to visualize with her warm but stoic eyes. A number of sketches and drawings are thus born.
It is true that we discover something more when we look into details of Azami’s works.

One may feel that her paintings are output of a kind of improvisation with strong brushworks. However, she puts sumi ink from the backside and moves her brush very slowly. Bleeds are to be recognized from the front side, and this is her characteristic method acquired by accident a failure but then is becoming her credit. She has produced a number of variations out of her imagination between what she draws and what the audience will watch. 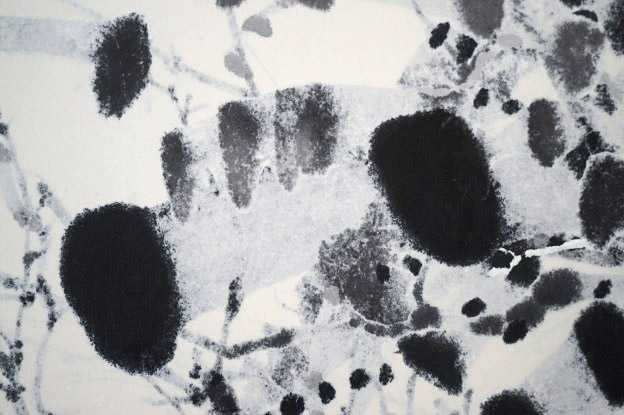 For example, black dots are depicted with a sheep-hair-brush: stopping at one point moving to another point. Slowly painted dotes form the back side look very powerful. On the other hand, the trails of bleeding brushwork will vibrate with the movement of the trees and its branches, thus represent the life itself of the tree. 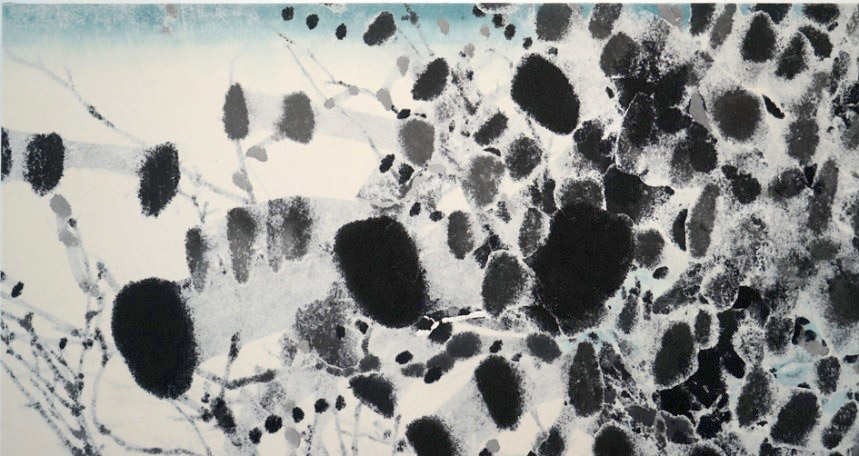 In this exhibit, the artist used “colors” other than sumi ink. The blue belt at the upper edge of the work is made up of the mixture of indigo and shell powder.
This blue color creates the space between the black-and-white branches and leaves, and slight touches color and its bleed of blue represent the pure atmosphere of the evening. 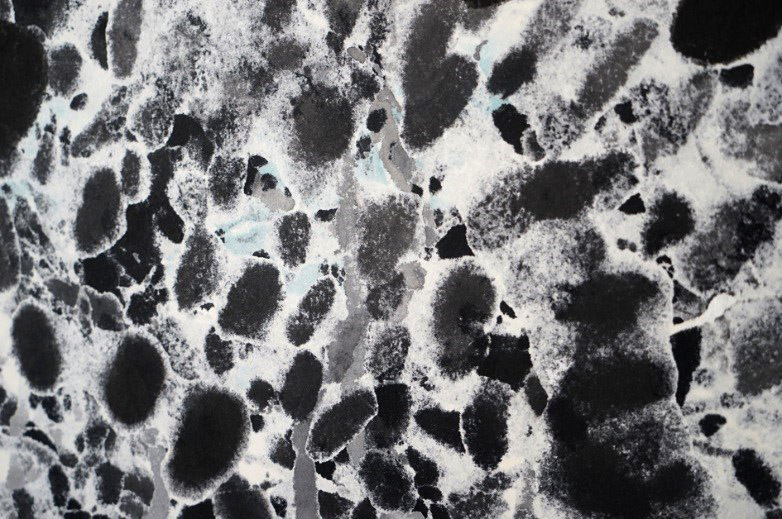 Gentle use of the blue color generates sense of depth between the sumi ink.Brush strokes from the back side create the effect almost expected, however, according to the subtle difference of the paper, the accidental effect will also make the diversified modality of the appearance of the work.
Branches and leaves vibrating in the faint light of the evening is somehow associated with the humorous form of tree of life, a frequent motif of artistic representation in West and East. This work which induce audience’s eyes into the depth of the space is really a masterpiece which attracts one’s eyes.