ART FRONT GALLERY presents the solo exhibition of Tokuro Sakamoto, which is after an interval of two years since 2016. After Sakamoto majored in a Japanese painting at Tokyo University of art, he devoted himself in studying Japanese paintings in a private painting school and has made his career painting casual daily sceneries. As for the paintings of Sakamoto, their compositions are decided by putting one or more image of photographs together. In spite of ordinary scenery at a glance, his works contain a mysterious atmosphere by the unique composition and the absence of the person. The bold layer of the close view and distant view reminds us the ukiyo-e print.

At this solo exhibition titled "False Vacuum", which is a physical technical term, Sakamoto shows the new works which reflected a fluctuation, disproportion, or the strain that slightly exist in the inside of the almost stable "vacuum" state in scenery. The motif of new works are for example the cloud in the sky, bath-towel hanging on the wall, or carps swimming under the water. To paint these natural sceneries, Sakamoto tries hard to find the perfect composition which could "barely keep balance". Viewer would have the absolute feeling of strain from these works. In addition, Sakamoto thinks about the fragility in our peaceful everyday scenery which would collapse so easily if the disaster or terrorism to occur. While some might feel the ordinary scenery goes forever, other feel it’s just a temporary state. He projects such a delicate feelings existing in Japan nowadays.


The street in front of the Meiji Memorial Picture Gallery in the Outer Garden of Meiji Shrine is the oldest still-existing asphalt road in Japan. Completed in 1926, it remains smooth and sturdy with only a few minor cracks. Each time I visit the place I squat down to touch the surface.
As a photographer specialising civil engineering, I became a fan of Tokuro Sakamoto when I encountered his Breath series. Viewing his roads, curvature of electric wires as they cross the sky, steel towers, and car parks, I thought these were pictures I had wanted to take. 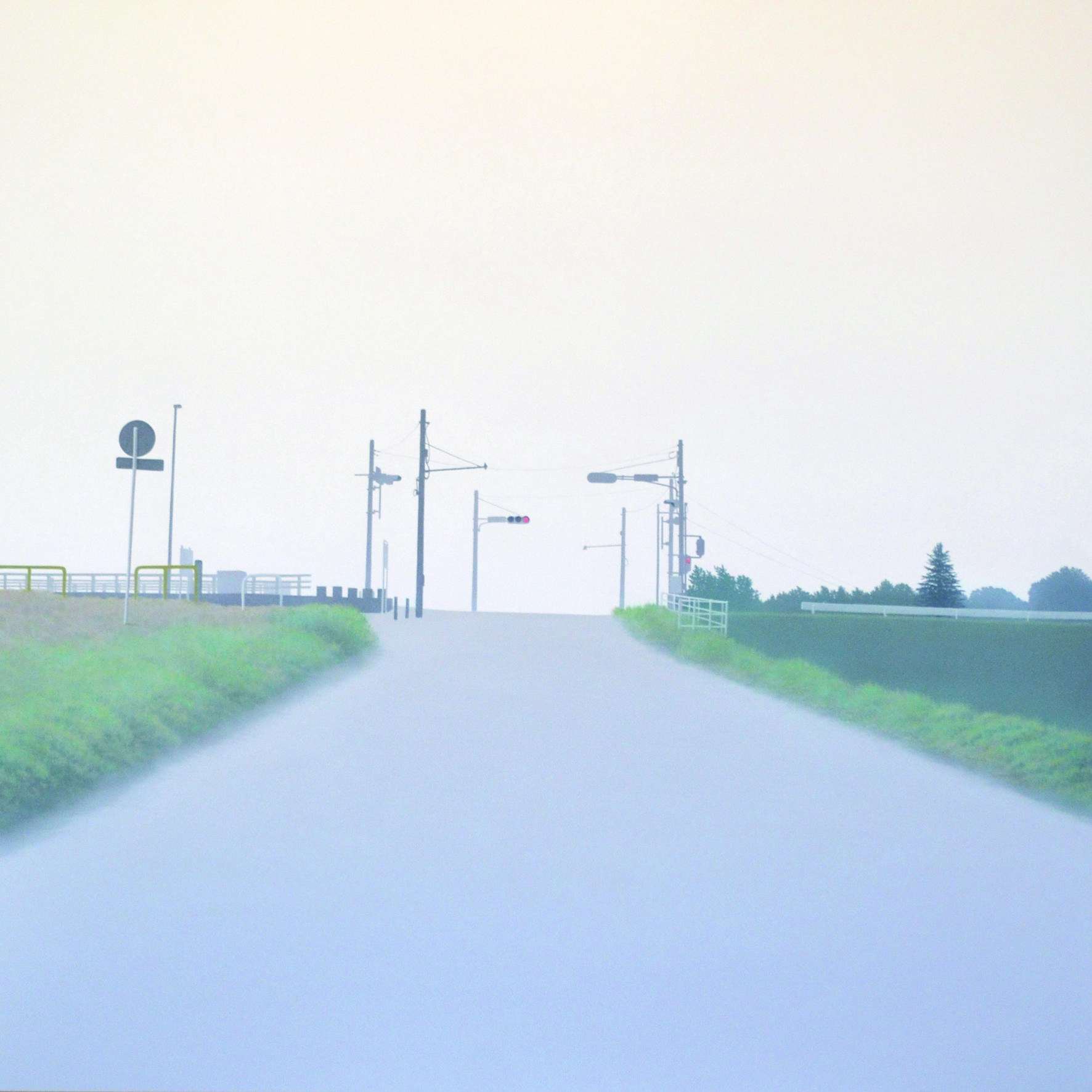 
In principle, photography requires distance between lens and subject. However close-up the thing is, there will be a separation. Photography is like the product of one’s eyes, while painting, by contrast, is the result of touching. A painter makes brush traces on a surface, touching the subject, even if it is the open sky.
One thing that fascinates me in Tokuro’s work is his roads. At first glance, a division between the asphalt-coloured plane and the white lines seem the sole point of interest. But the real pleasure, I feel, comes from a texture which appears only when one looks close. One might call this the matière of Tokuro’s paintings. This is not the texture of an actual road, but the trace of a road as touched by Tokuro. His compositions reduce things to their ultimate limit, and are like devices bringing us close to the joy of touching a surface with brushes.
Asphalt roads are many-layered. Below the final surface are base, upper and lower strips. This resembles the process of making paintings. Traditional Japanese art uses a white sea-shell powder called gofun as the base plane. Gofun has the same chemical components as cement. It literally creates a ‘construction’.
This is how painters touch the ground, the water, or sky. I feel an impulse to touch the surface of Tokuro’s paintings each time I see them too, though I know I must supress this wish.