We introduce the exhibition of Kawaguchi in the past for better understanding of his creativity. 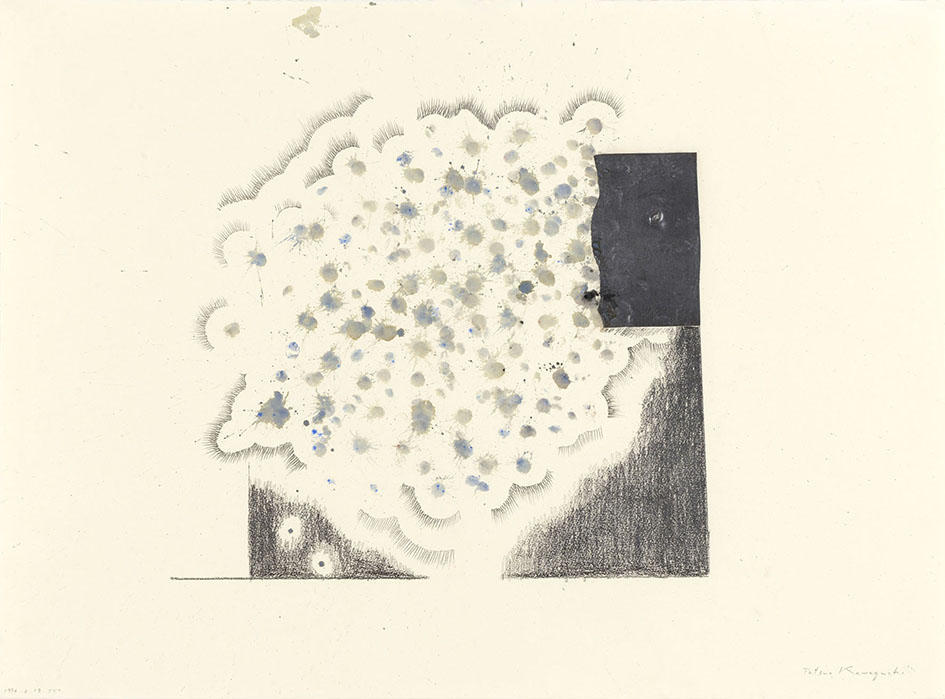 A series of works titled “Surrounding the Seed” to be presented in this solo show consists of 30 paper-based works in drawing style with two sizes, small and large, which were produced in 1990, and of ten copper-sheet-based works in objet style, which were produced in 1991 and 1993. All of them have small pieces of lead plate pasted on a paper or copper sheet, and conceal plant seeds between paper or copper sheet and the lead leaf, in that respect, this series inherits the fundamentals of the series: “Relation-Seed”, many of which he has made since 1986, but it shows other elements as well. While in the “Relation-Seed”, lead plate covers the whole tableau just like sealing and concealing seed, the “Surrounding the Seed” places more weight on pounding the surface, the splash of paint, making the infiltrated space sensible with lines and colors around the buried seeds than on sealing seeds with lead plate, which only a part of the work. That is, the subject in the “Surrounding the Seed” is not the seed nor sealing the seed, but calling back the seed sealed in the hermetic world to the sensory world by beating and awakening the place coating seed like a field. In fact, three of the paper works of “Surrounding the Seed” do not include seed nor lead, but mark out a space like a field on paper only with pencil and watercolors, and stimulate it all around. 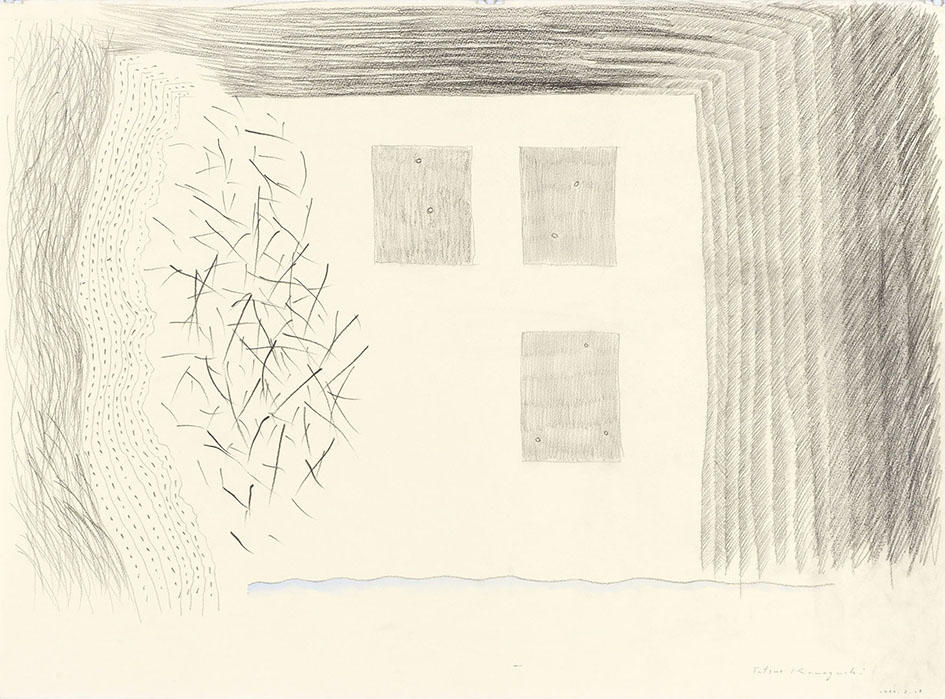 Does that mean that both series are exactly going in opposite directions, while showing the same act: to coat seed in lead? The “Relation-Seed” is toward concealment, the “Surrounding the Seed” is toward manifestation. However, in the latter series, the copper-plate-based works in objet style are rather hermetic in the principle of objet – it is true that each of these copper-plate works is put in a white wood box --, and the paper works in drawing style are rather manifestative in the principle of painting; they produce the original effect of “drawing” and “painting” which is to invite people to realize the secret and the invisible thing by being manifestative. 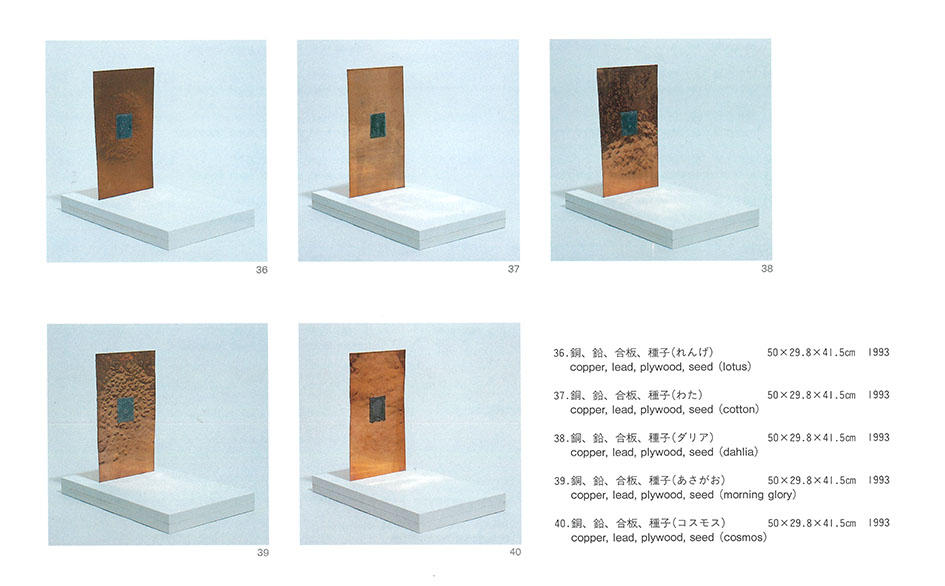 Concealment and manifestation. And maybe, the direction for objet and that for painting. It should not be accidental that Tatsuo Kawaguchi’s recent works, especially the works taking up “seed”, the ambiguous material and subject, seem to show those two directions. Because the two opposite directions have contended in outdoing each other like a seesaw game in his activities since 1966 to 1967, when he left painting and chose a more conceptual way of art. For example, “Land and Sea”, which consists of 26 photographs and was exhibited in Tokyo Biennale in 1970, and “Relation-Energy”, which was presented in the Pinar Gallery in 1972 and in the Paris Biennale in 1973, encourage us to realize the invisible power and non-present relation behind while manifesting visible power and sensible phenomena. That is, they “make us aware of the invisible by showing everything clearly”. They can be said to connect with the paintings consisting of chains of a matchstick shape, which Kawaguchi drew by 1966, and with his earlier paintings in Paul Klee style, beyond the difference of style.
On the other hand, the way of making people strongly conscious by concealing is highly typified by the objet sealing sound, slight, darkness and light in metal vessels from 1971, especially by the works sealing soil, water and air in long metal pipes from 1986. I think this technique of concealment as well as that of the eye trick of “making the non-present as present” were accomplished when he played a part in the Japanese Intellectualism School with Jiro Takamatsu, Etsutomu Kashiwara, Nobuo Sekine and others from 1867 to 1968. While he soon gave up the technique of the eye trick as it was not art but amusement, he could not abandon that of concealment because of his strong interest in the insensible. 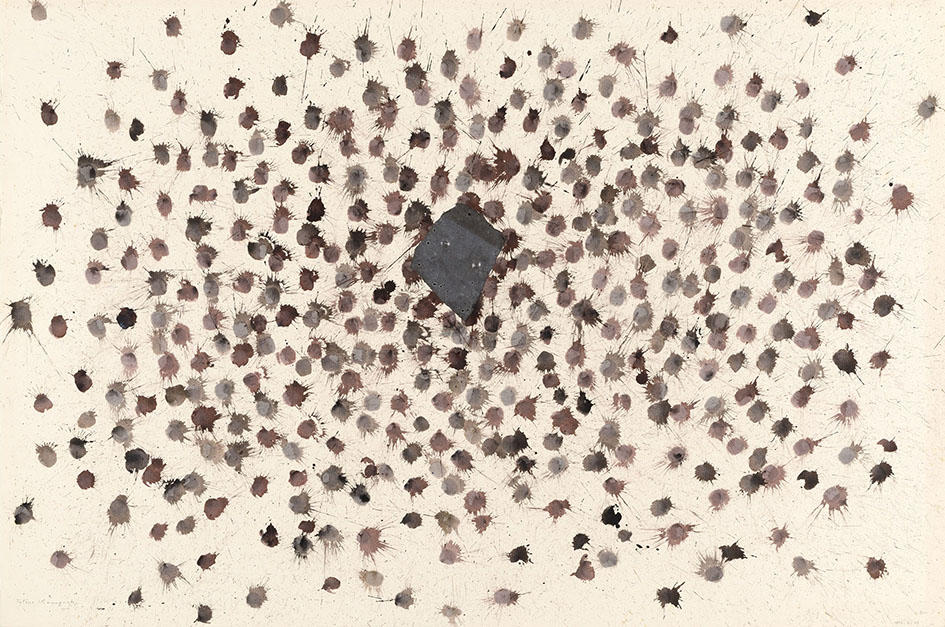 Then, are concealment and manifestation equal to Kawaguchi? Not so. The concealment in the style of Duchamp is not appropriate for the Asian artist who perceives expiration and atmosphere in matter. As that series of rust works from 1976 announced and the pounding in this “Surrounding the Seed” suggests, what Kawaguchi conceals cannot help starting to move toward manifestation and revival autonomously and heteronomously．His experienced technique of concealment will not be annulled, and if so, it would be a total loss for him. However, why he chose plant seed as object to be sealed is that he learned that the seed involved a turning point from concealing to revealing, as it should start vibrating and raise a call to germinate one day. From concealment to manifestation. Taking a wrong step on this road, the modern times advanced from alchemy to positive science and lost any sensitivity to the “invisible”. Why Kawaguchi did not abandon the technique of concealment is that he did not agree to such one-sided manner of modernity. While making objets, he should have connected himself to the pre-scientific technique (alchemy) of concealment. At the same time, his essence as a painter seems to start vibrating to manifestation by art (revealing mystery by manifestation), not by pre-science or positive science. Do people feel so, when seeing the drawings of “Surrounding the Seed”? There the gesture of pounding to awaken the seed (awakening of time) is unified in the proper way of plastic arts to make the spatial vibration sensible by lines and colors. 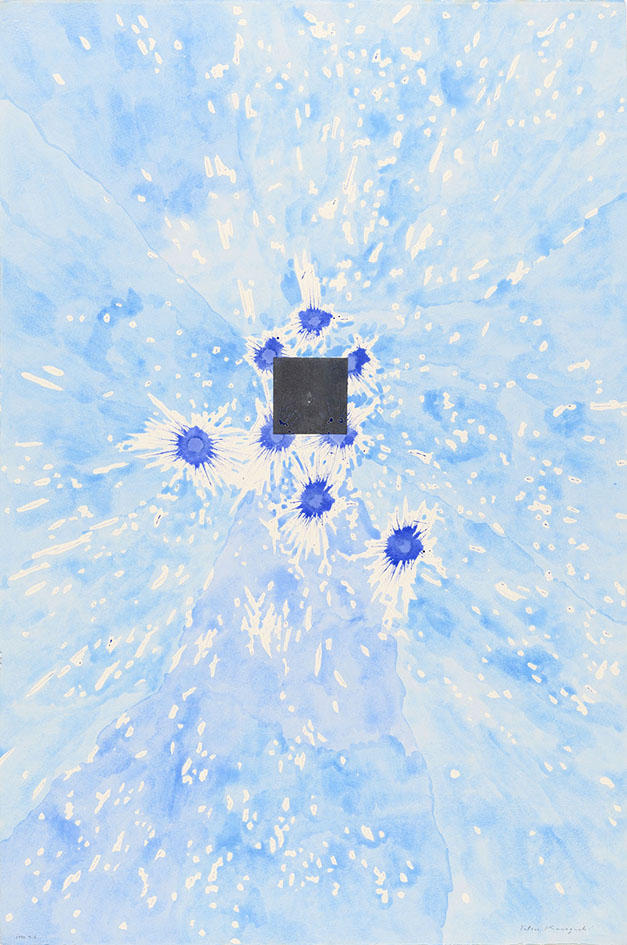