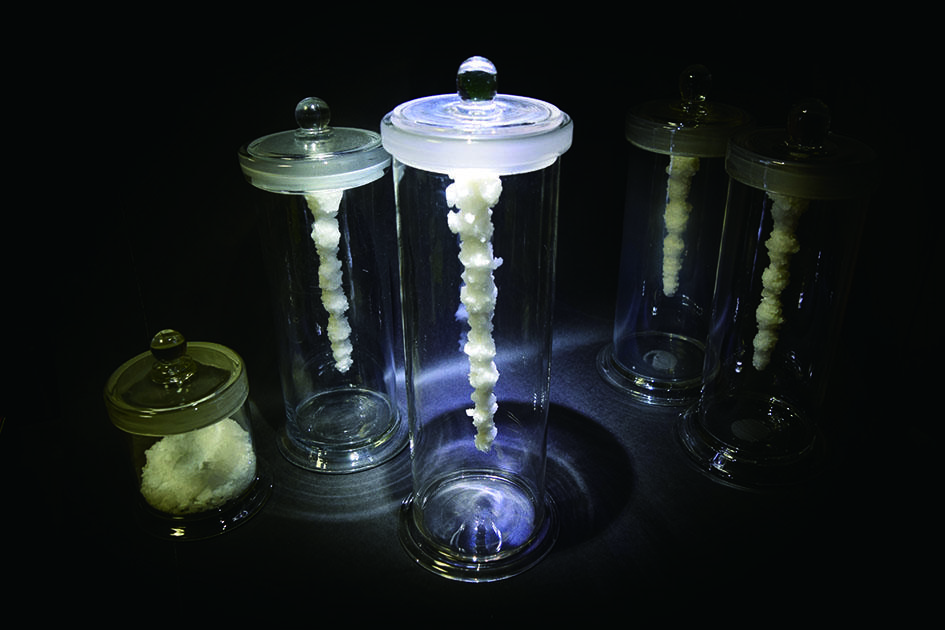 
Yoshitaka Nanjo’s daughter once gave him a precious object, from which came the idea for this exhibition of new work. The object glittered in Nanjo’s hand. It was a piece of quartz, called in Buddhism one of the Seven Treasures, and thought by the Mayans to magically make wishes come true.


Nanjo’s concern as painter and artist is with the sense of ‘place’.
He is most interested in what is called the atelier or studio, where artists materialise thought into created objects and forms. His concern extends to museums, galleries and spaces of exhibition. Consider the recent shocking news of extensive damage to Notre Dame de Paris, a World Heritage Site (April 2019). It is a space filled with icons, hung on the walls of that gigantic religious structure. We understand it has been a site of prayer for a very long time. This is a ‘place’ where iconography concretises worship. It is a good example of what matters to Nanjo with his notion of ‘place’.

In 2017, Nanjo was an invited artist at the Oku-Noto Triennale at Suzu City, on the tip of the Noto Peninsula. Knowing this is Japan’s biggest producer of diatomaceous earth, or fossilised plankton, Nanjo used that material. He produced a dramatic installation exploiting the possibilities of the building in which it was exhibited - a former cinema, so an atmospheric space where locals once watched exciting stories unfold. For the present exhibition in the gallery, Nanjo explores qualities of place particular to another area, Kumano, in Wakayama Prefecture, stemming from the quartz object given by his daughter.


The exhibition is in two parts.

The first, Room A, shows Nanjo’s rediscoveries and reinterpretations of Kumano, as prompted by the piece of quartz. He returns to the 10th Century, when Kumano pilgrimages were initiated by Emperor Uda (r. 887-897). Today, quartz is used in watches, so can also symbolise time. Room A shows these elements via meticulous relations of light and sound, projections and LED lighting.

Room B shows work similar to what Nanjo will present at the Setouchi Triennale 2019. Here, using his notion of place, pieces are specific to his home town, Sakaide, Kagawa Prefecture, a city facing the Seto Inland Sea. Sakaide used to be a major salt producing area, and Nanjo takes inspiration from salt crystals. Icicle forms are placed in bottles to suggest the slow process of dissolving. It represents memory of place and time, in a manner pertinent to Sakaide, making the city feel both near and far.

When a university student, I had a friend from Shingu City in Wakayama. He invited me to stay at his home each summer vacation, and we lodged at the family house in Hongu, further up the Kumano river. The building dated to the Edo Period, and it was an extraordinary experience for me to eat fish cooked on an earthen charcoal brazier, bath in an old-fashioned tub, and sleep under mosquito netting.


Whenever I stayed, we visited the three Kumano shrines at Hongu, Hayatama and Nachi. We walked ancient Kumano pilgrimage paths, and were splashed by Nachi Waterfall. Dense forests of thick trees, sun filtering through their branches, and sparkling waters from the Kumano river helped me appreciate the serene and secret nature of this special region. In these deep mountains people offer prayers to the gods.

Yoshitaka Nanjo now lives in Kumano, and he exhibits his sharply sensitivity work nurtured by his viewpoints on region’s historical, religious and geographical significations, infused with his personal experiences.
Gods of the Kumano mountains might be viewing all this from afar, and if so, with their gently different expressions, they surely chuckle at the development of Nanjo’s work, as they ponder his artistic future.