Leandro Erlich is an Artist who was born in 1973 from Argentina. We can say, he is the most well known in Japan as a foreign artist who made famous swimming pool in 21st Century museum of contemporary art Kanazawa.

I bet some people still don’t know his work also exhibiting in Echigo-Tsumari.
In his carrier, his first shown his work in Echigo-Tsumari is 2006. And he showed his huge mirror piece that is called “House of Tsumari” After that he has exhibiting his bizarre Storage house in Echigo- Tsumari Satoyama Museum of Contemporary Art KINARE that is one of the main stage of Echigo-Tsumari art triennial since 2012. 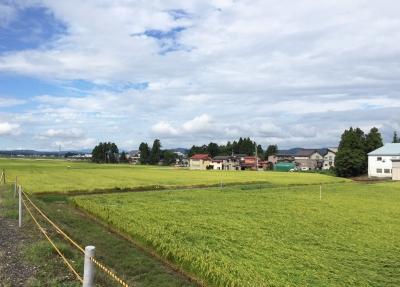 Exchange hall KINARE that designed by Hiroshi Hara has been renewed as Contemporary Art museum at Last triennial in 2012.
Fram Kitagawa who is main director of Echigo – Tsumari Art Triennial define those Satoyama area in Echigo- Tsumari as the field museum and he also place the facility as an entrance of it. He tries showing many elements such as the vegetation, climate, food and culture as their microcosm. Leandro’s storage has been placed in the main facility. 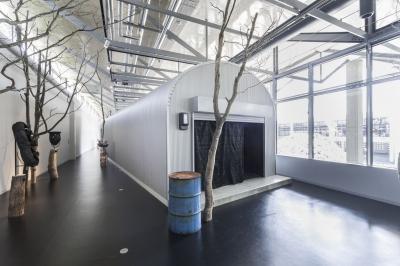 Firstly, what things catch our eyes are woods consisted by broad leaf tree in the room when we entered the 1st exhibition room. Inside the trees, there is an storage that the roof formed as Kamaboko (Japanese fishcake) : the roof shaped as a semicircle. 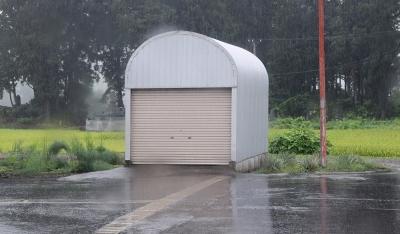 This area has much snow that basically piled it more than 4m height in winter time. The storage form is well considered to bear the pressure from heavy snow in one of the most heavy snowfall area. In front of entrance, the oil drum has placed as a normal view of this area even this artwork is located in a museum. Such as well considered and detailed expression shows his own character for his idea for creation. Inside of this storage you will see it has made as an inside of a tunnel. That is also made very detailed and you can see it as real. That make me feel moisture of wall and road inside a tunnel. 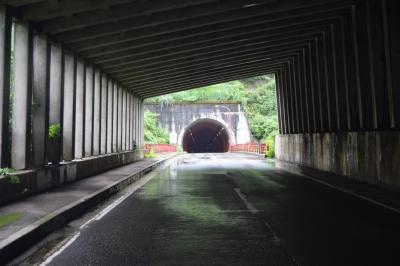 The tunnel is also the symbolic one which cannot look over in this area. In Echigo-Tsumari, there are 6 area and more than 200 settlements that some of them are even placed inside mountain. Tunnel is necessary to connect all those areas since it built in 1970s. Leandro combine those 2 symbols of this area that artist has been fascinated with since the very first he arrived here to create the art work which is uniquely and distinctive in that area. 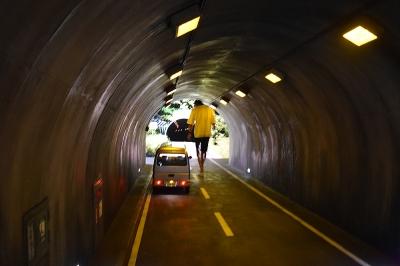 Finally, I want to suggest a point how to look at the work better. Leandro’s work trick us into thinking something real its often using material such as mirror.However, It is clearly different from a trick art because he uses common things in our daily life to make us doubt our understanding. Therefore, the trick is always easy and let you into the secret purposely. Actually you can see people are suddenly looked as a giant by some visual effect by this tunnel when you enter inside of the tunnel. But in mostly case, people just go through without realizing it, because they don’t know right way of appreciation of this work.