We are pleased to introduce Mounir Fatmi's New works.
Mounir Fatmi has attracted much attention in contemporary art world, participating in Venice Biennale or other art festivals. While keeping his Arabic identity, he develops his ideas in the context of contemporary art. He is interested in language or education as reflection of political power or in social problems of mass consumption.
In this column, we would like to focus on his brand-new installation work " The class room", which is created in the motif of the classroom of elementary school.

Flying chairs in the classroom space refer to an abandoned school with nostalgic air. 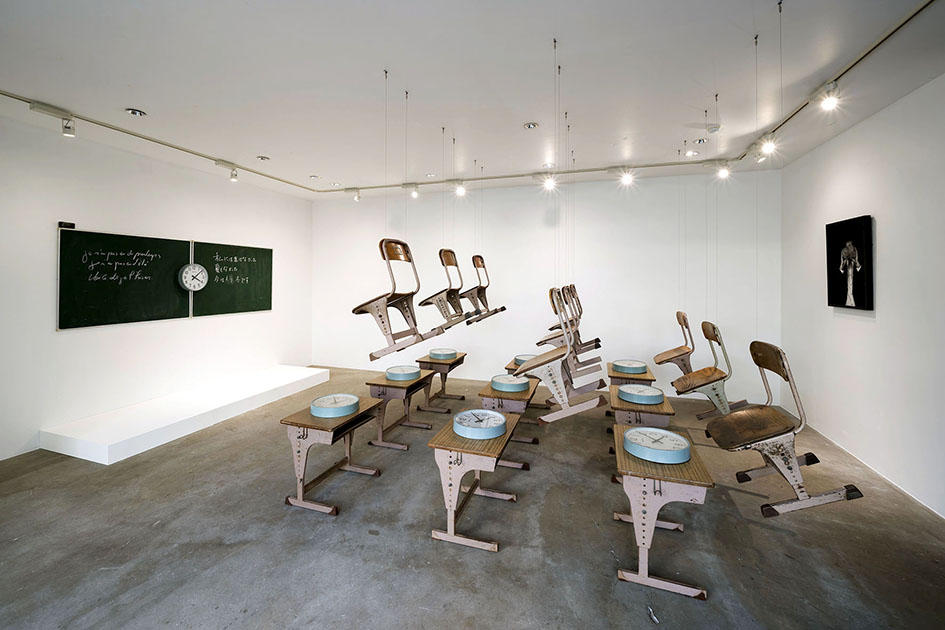 
The clocks all indicating the same moment, the French text on the blackboard going as ‘I did not have spring’. What is the story or anecdote beyond this “place of knowledge” according to the artist who could not regularly attend the primary school in his childhood? 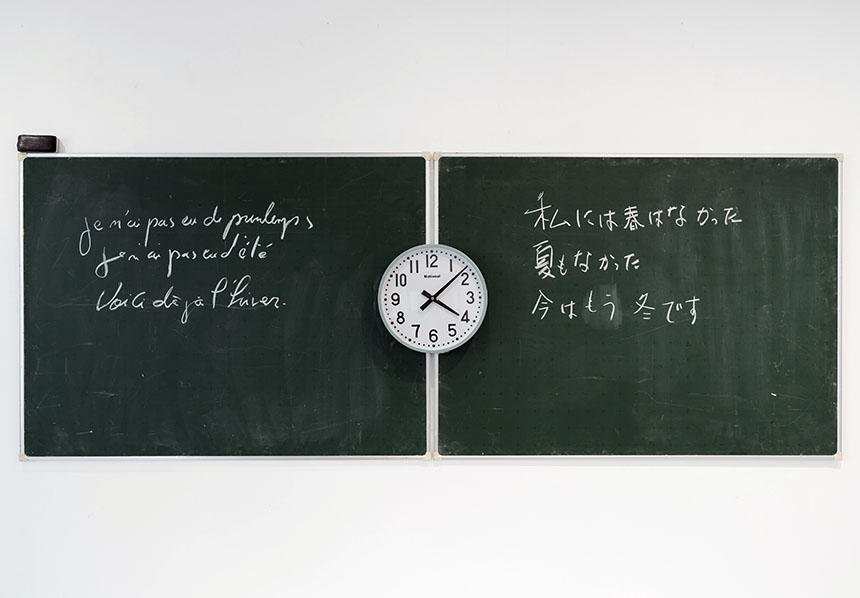 Mounir Fatmi participated in Setouchi Triennale in 2016, his first site-specific work in Japan. The artist had attracted much attention in the Western world through his participation in Venice Biennnale among others and this time, and this time in remote island Awashima, Fatmi created an installation based on the given school and its surroundings. 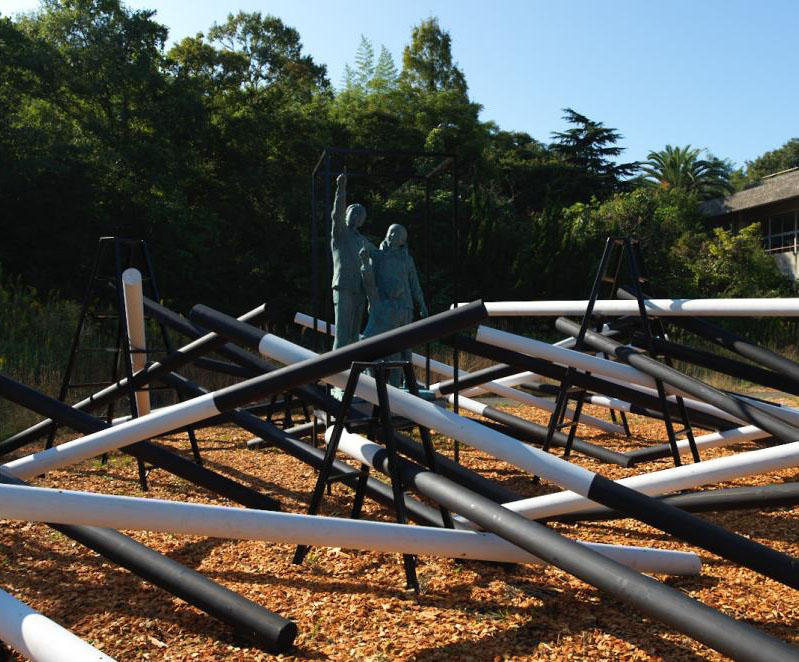 
For example, sounds recording the voices of children or school song coming from the classroom, natural elements such as light, shadow or wind all suggestive of the past days. On the ground was produced a composition of poles with original bronze of boy and girl. While the boy pointing there in the distance, the girl pointed here this land, which may be overlapped with the artist holding double identity of Moroccan and French ones. 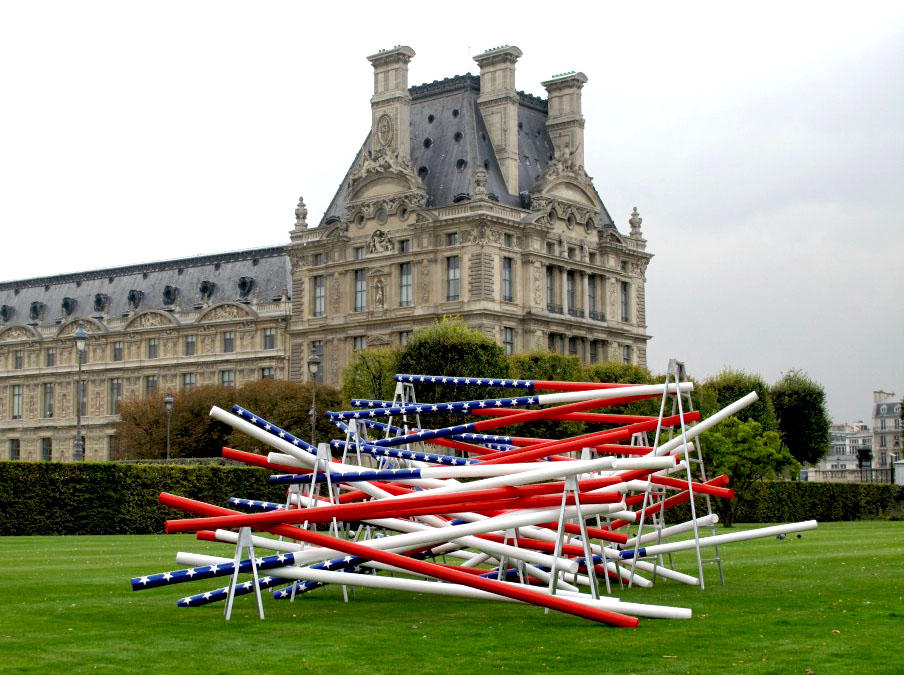 
Fatmi left his hometown in his youth to ‘go and see the larger world’ although he still keeps his hope for modernization of Arabic countries. He once stated that his jumping pole recurring like leitmotif in his work represents the present society moving forward to results-based supremacy: faster, higher and no failure. So far, the jumping poles may have been used for ‘obstacles’ for democratization or modernization of these countries as the obstacles suggesting flag of the United States have been installed in the Tuileries garden or in Dubai changing its meaning in respective place. 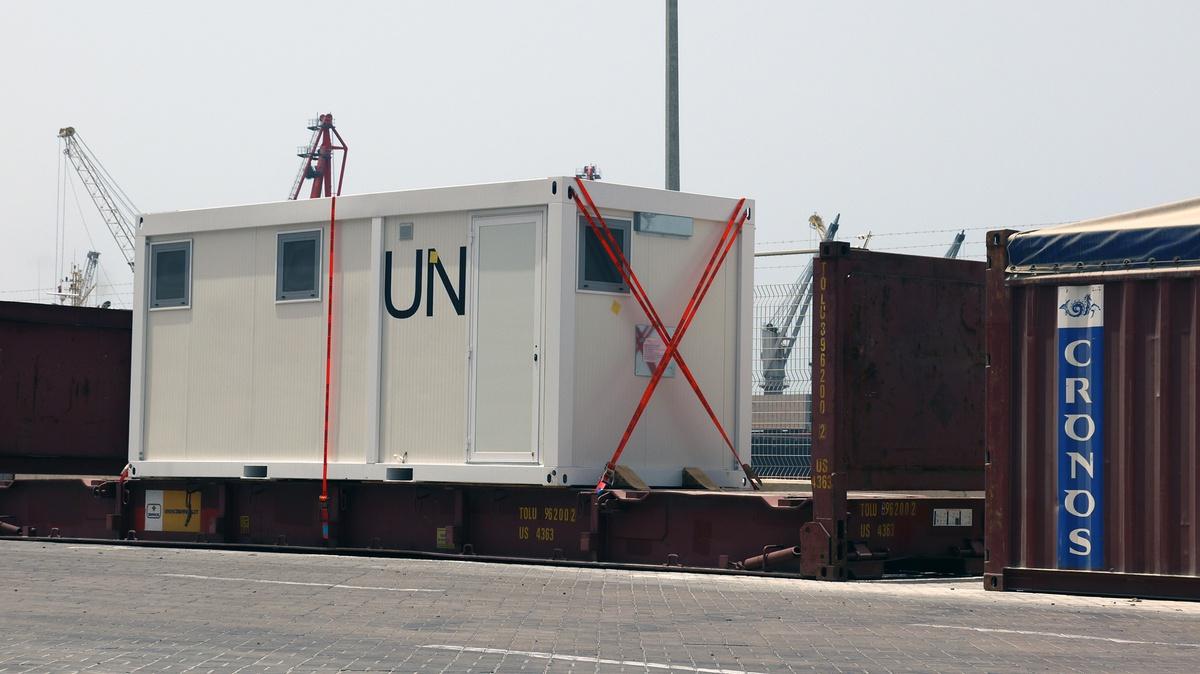 
Last summer in Venice Biennale Fatmi presented a work in relation to immigrant issue in Tunisian pavilion. He calls himself immigrant worker once out of the museum space. He notes the fact that he has no voting right in Paris where he lived over the years while his staff have themselves. He continues to create pieces out of such situation. He will participate in Echigo-Tsumari Art Triennale in 2018, and his new development is expected then.