Art Front Gallery is pleased to announce the upcoming exhibition Mounir Fatmi.
Born in 1970, Tangier, Morocco, mounir fatmi lives and works between Paris and Tangier. He constructs visual spaces and linguistic games. His work deals with the desecration of religious objects, deconstruction and the end of dogmas and ideologies. He is particularly interested in the idea of death of the subject of consumption. This can be applied to antenna cables, copier machines, VHS tapes, and a dead language or a political movement. His videos, installations, drawings, paintings and sculptures bring to light our doubts, fears and desires. They directly address the current events of our world, and speak to those whose lives are affected by specific events and reveals its structure. mounir fatmi’s work offers a look at the world from a different glance, refusing to be blinded by the conventions.
Mounir fatmi’s work has been shown in numerous solo exhibitions: in Mamco, Geneva, in the Migros Museum für Gegenwarskunst, Zürich, Switzerland, at the Picasso Museum, war and peace, Vallauris, at the FRAC Alsace, Sélestat, at the Contemporary Art Center Le Parvis, at the Fondazione Collegio San Caro, Modena, at the AK Bank Foundation in Istanbul, at the Museum Kunst Palast in Duesseldorf and at the MMP+, in Marrakesh. He participated in several collective shows at the Centre Georges Pompidou, Paris,The Brooklyn Museum, New York, N.B.K., Berlin, MAXXI, Rome, Mori Art Museum in Tokyo, Museum on the Seam, Jerusalem, Moscow Museum of Modern Art, Moscow, Mathaf Arab Museum of Modern Art, Doha, the Hayward Gallery, London, the Art Gallery of Western Australia, the Victoria & Albert Museum in London and the Van Abbemuseum in Eindhoven.
His installations have been selected in biennials such as the 52nd and 54th Venice Biennial, the 8th biennial of Sharjah, the 5th and 7th Dakar Biennial, the 2nd Seville Biennial, the 5th Gwangju Biennial and the 10th Lyon Biennial, the 5th Auckland Triennial, Fotofest 2014, Houston and the 10th Bamako Encounters. mounir fatmi was awarded by several prize such as the Cairo Biennial Prize in 2010, the Uriöt prize, Amsterdam, the Grand Prize Leopold Sedar Senghor of the 7th Dakar Biennial in 2006 as well and he was shortlisted for the Jameel Prize of the Victoria & Albert Museum, London in 2013. 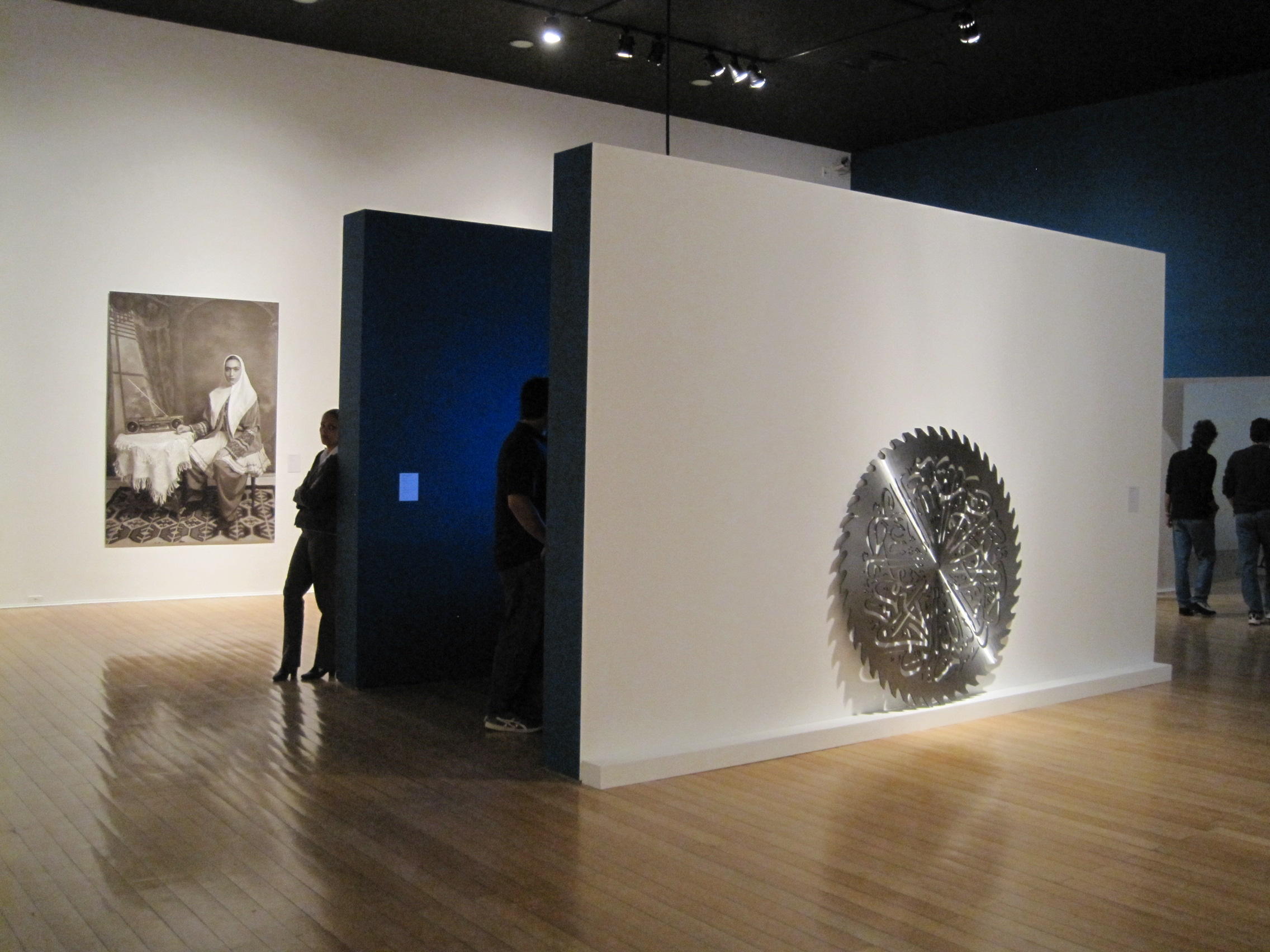 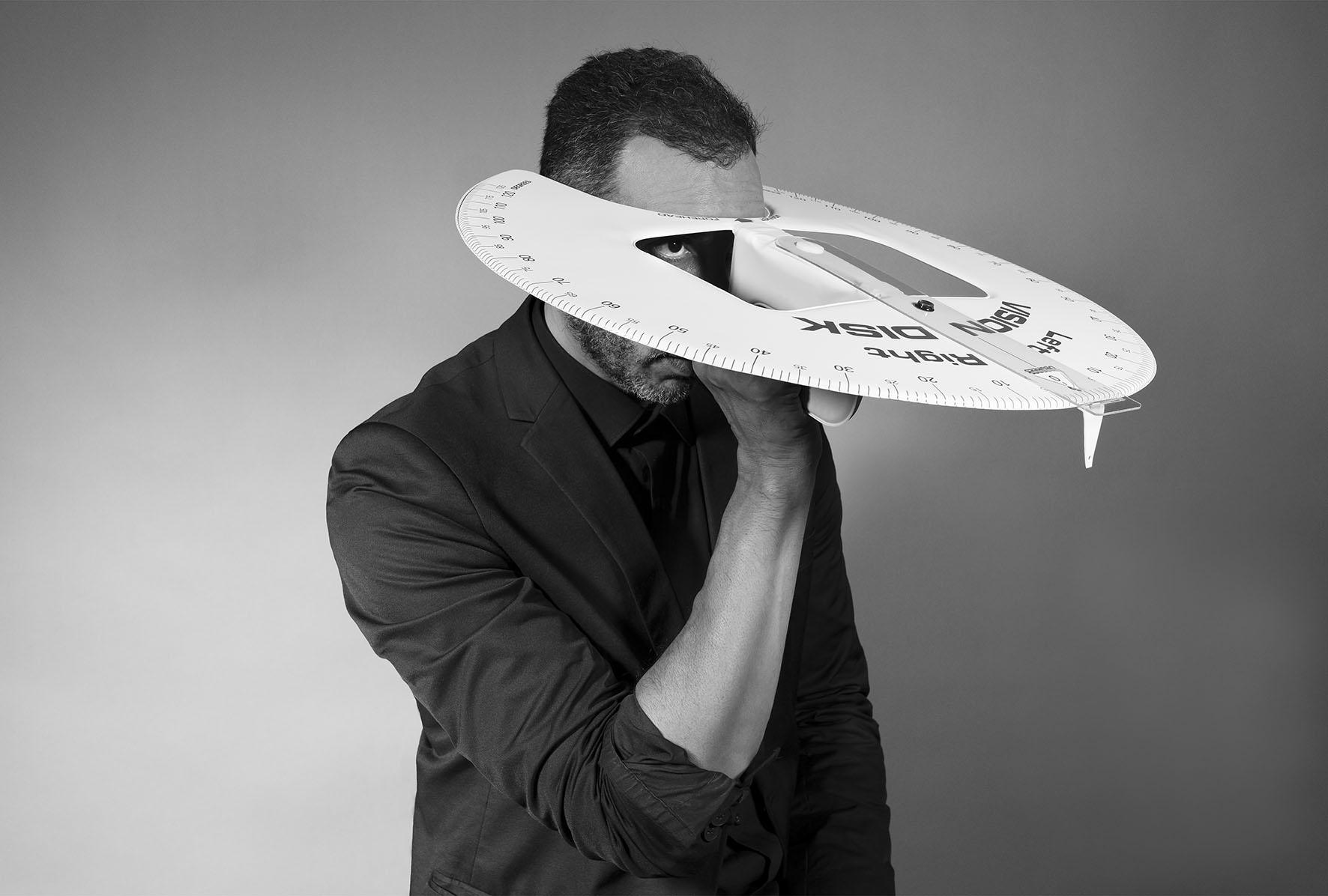 I first encountered the large scale works of Mounir Fatmi at Africa Remix, a touring exhibition that came to the Mori Art Museum. Fatmi made a Constructivist-like installation from horse jumping barriers. It suggested fragility, as if even a light touch would cause everything to collapse. It was a sublimation of the dangers of competitive horsemanship’s demands for ever faster running and higher jumping. Rails in vivid colour, looking rather pop at first glance, added a somehow dry feeling, resisting interpretation．

Mounir Fatmi was born in Tangier, Morocco. His viewpoint was developed in the local markets, and he then went to study at an art school in Rome. He transgresses the boundaries between these two cultures, relativizing them, and attempting to bridge their differences. In 1993, Fatmi ‘symbolically announced his death’ in the media, and in a departure from Moroccan tradition, entered into a world of free creation. This meant he no longer saw any culture from established points of view, but treated all equally, without adjudicating or taking sides. This led him to a kind of transcendence.

Fatmi was invited to the Setouchi Triennale in Japan, where he exhibited an installation in a disused schoolyard on Awashima Island. He used stick-like materials placed around an existing statue of children. He also exhibited an installation inside the school building using clocks and world maps, suggesting relative relationships between space and time. This installation occupied many rooms, including a former music room and the head teacher’s office, but giving visitors the impression of an integrated storyline. Fatmi also uses sound as the material of his installations, and has created many video works. In this sense, he can be called a ‘storyteller’ in many, varied materials and in a truly liberated manner.

This solo-show by Mounir Fatmi uses the limited space of the gallery to give a symbolic glance into his diverse modes of expression.
Fumio Nanjo  Director, Mori Art Museum