An interview of Teppei Kaneuji about "Summer Fiction".

G: (gallery） This solo exhibit was organized in relation with Echigo-Tsumari Art Triennale 2018, showcasing the very snow of Echigo-Tsumari area. What was the starting point to use “snow” or “snowplow” as artistic motif?

K: (Kaneuji) I visited Echigo-Tsumari in fall 2017 for the first time. I was then impressed to know that the area has been suffering from heavy snow, hearing about the geological, meteorological or historical characteristic of the area. They told me that the world will be completely different between summer and winter. My first visit was in October without snow, however, I found colossal snowplows just standing with such an overwhelming presence as well as impact! It was a strange feeling of some flying or floating sense in the vacant space, which opened the world of SF of mine own. 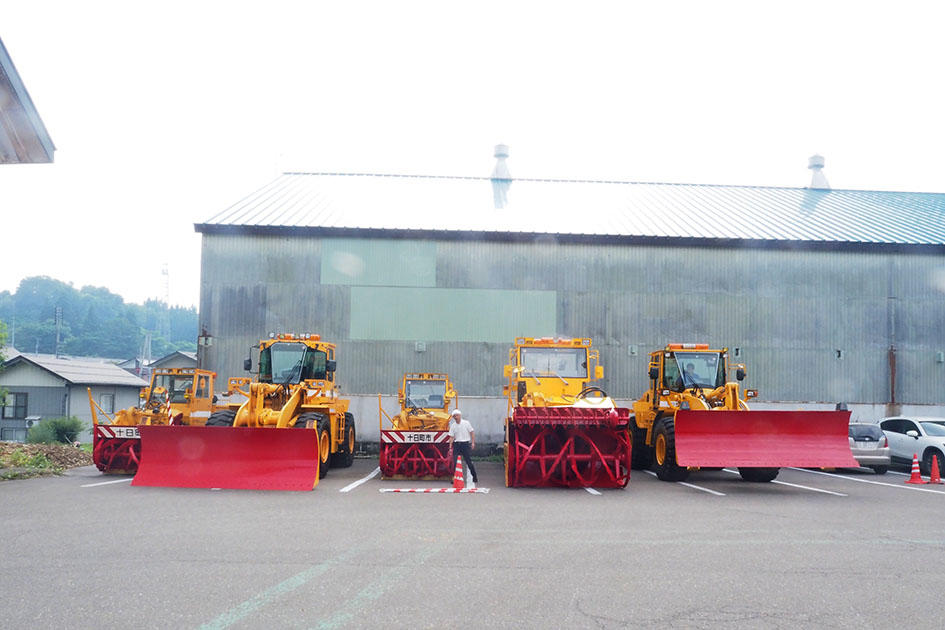 
G: That was the core of your concept to represent snowplows as well as snow-scape in the midsummer without snow. You exhibit a series of huge snowplows in Tsumari work while you put smaller snowplow for family use in Art Front Gallery.

K: First, I thought of showing simply snowplows parked in the warehouse. In order to elaborate the fictional state of the scene, I added the imagery of video, photo, sound or lighting all integrating as installation. That will, I believe, encourage the viewers to imagine during summer time the winter time far from the present situation. They will also imagine the far place of Echigo in exhibit of the gallery in Daikanyama. 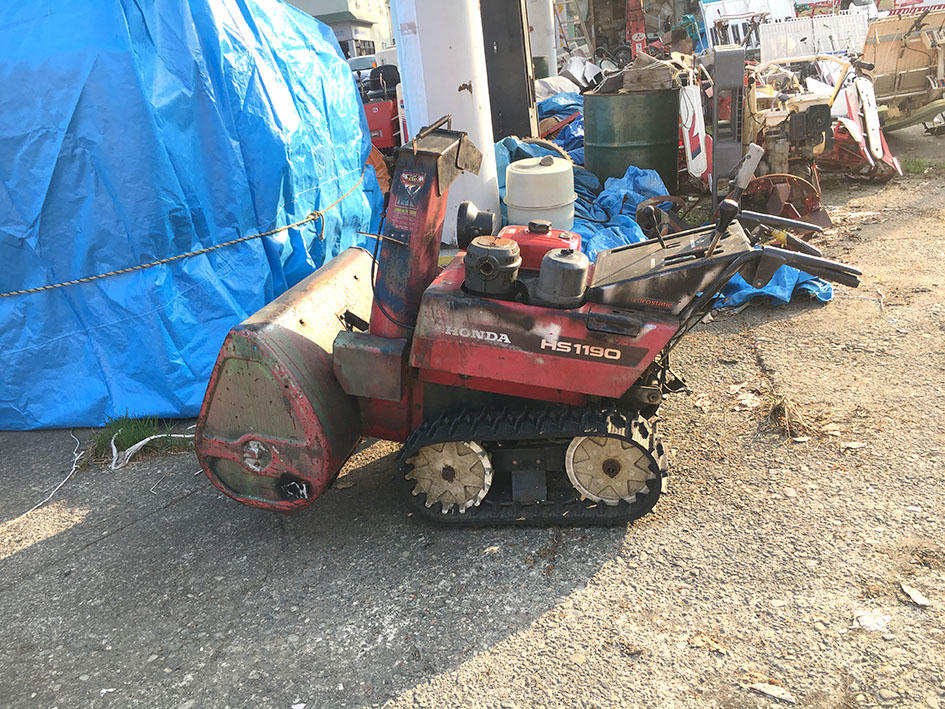 Caption: Small sized snowplow used in the farm of the locals


G: Did you visit Tsumari again in heavy snow of February for research of video, sound and photos?

K: That time I was with Masamitsu Araki, sound artist, and with Takuya Matsumi, video artist. We focused on shooting the activity of snowplows closing up the snow blew out or focusing some “traces” of snowplow such as the snow wall or snow mountain created by snowplows. 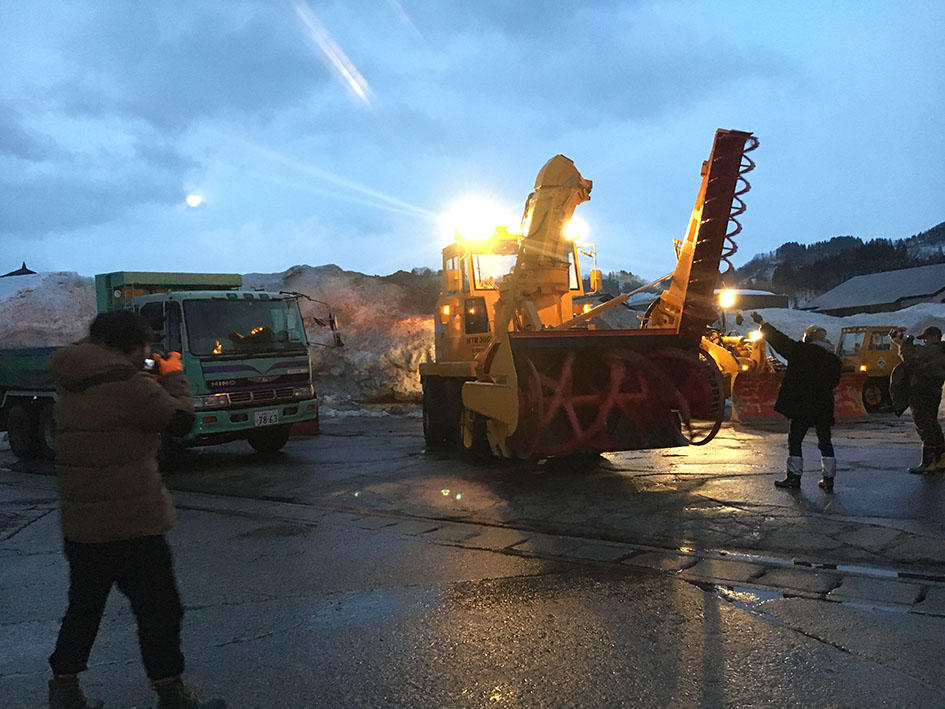 Caption: Scene of research (Kaneuji on the left)


G: During the research for recording the activity of snowplows, did you have any impressive anecdote?

K: Honestly, we could not shoot the active snowplows at first, there was not much snow falling in February. As soon as we caught the information of snowplow working, we rushed to follow their activity! What interested me on the other hand was the snow mound created artificially. They are rather dirty grey mound, as you see in these photos or video, had been produced in the parking area of shopping center to pool the eliminated snow. They were giving a presence, outcome of the battle between men and colossal natural phenomenon showcasing a form of collaboration of men and nature at the same time. This product impressed me most. 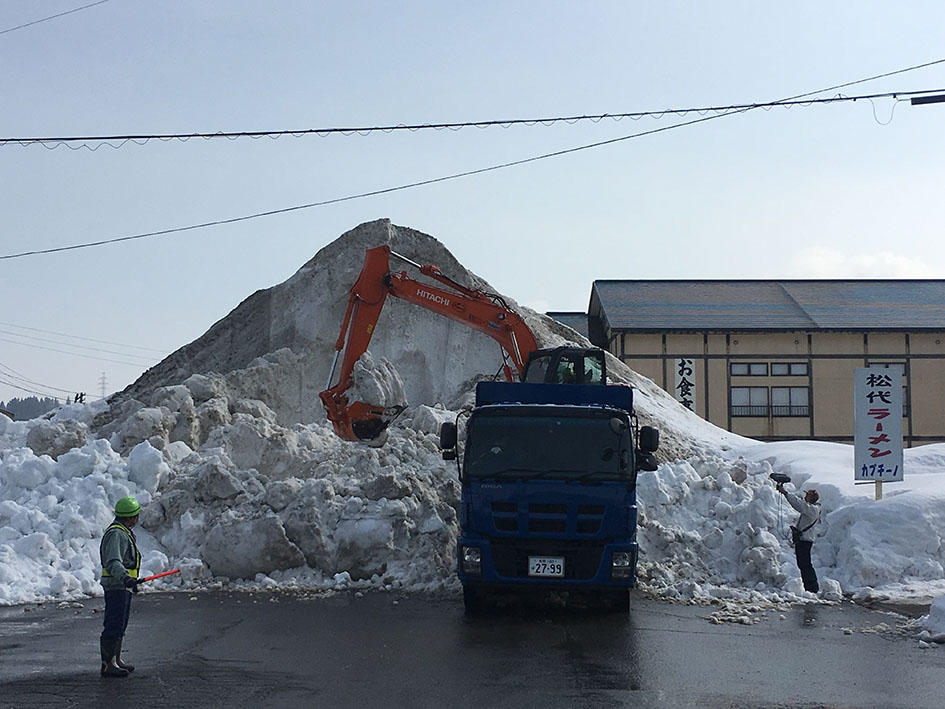 
G: You have collaged comic images on photo work. How did you conceive this idea?

K: Comic images are printed silkscreen on the acrylic board over the photo. I encounter this way of presentation during my artist’s residence in STPI in Singapore. The collaged images have been taken from the SF comics I read in my childhood. For the most parts come from the comics in the seventies or eighties, which, according to the researchers of comics history, allow a wider world of future through these images with detailed background, for example. 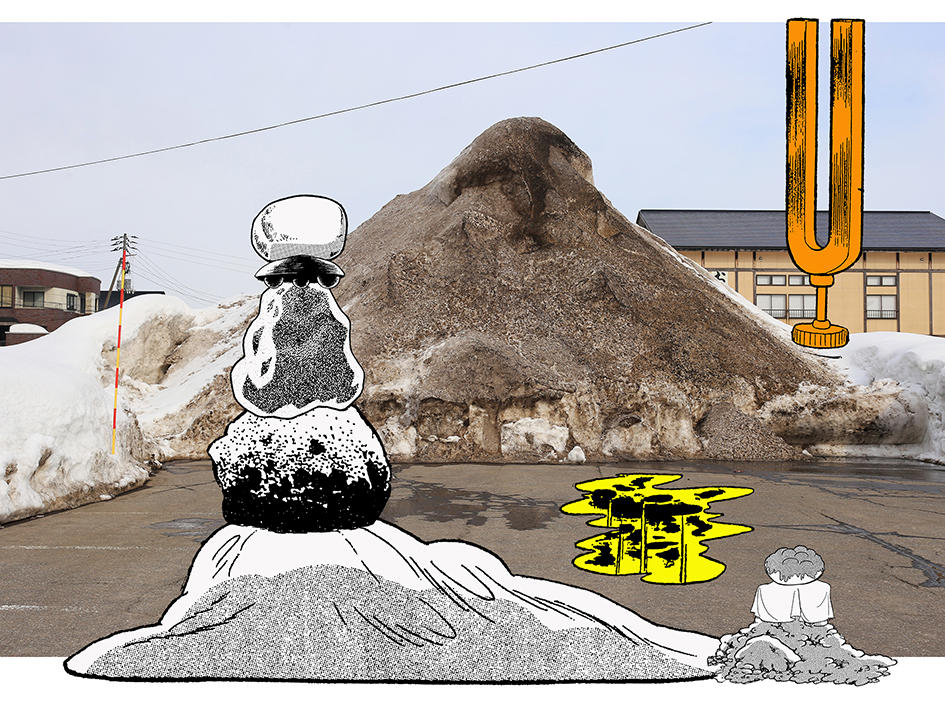 
G: Surely a variety of images are encrusted into these works.

K: Silkscreen prints on photos are monotype since layout are changed every time.
The used colors are those taken from the body color of snowplows such as red, orange, green and yellow. These colors are also used in the reflective sheet pasted onto the wall paper work. Reflective sheet found in the road signage inspired me as iconic material of landscape or earthy image in this area. 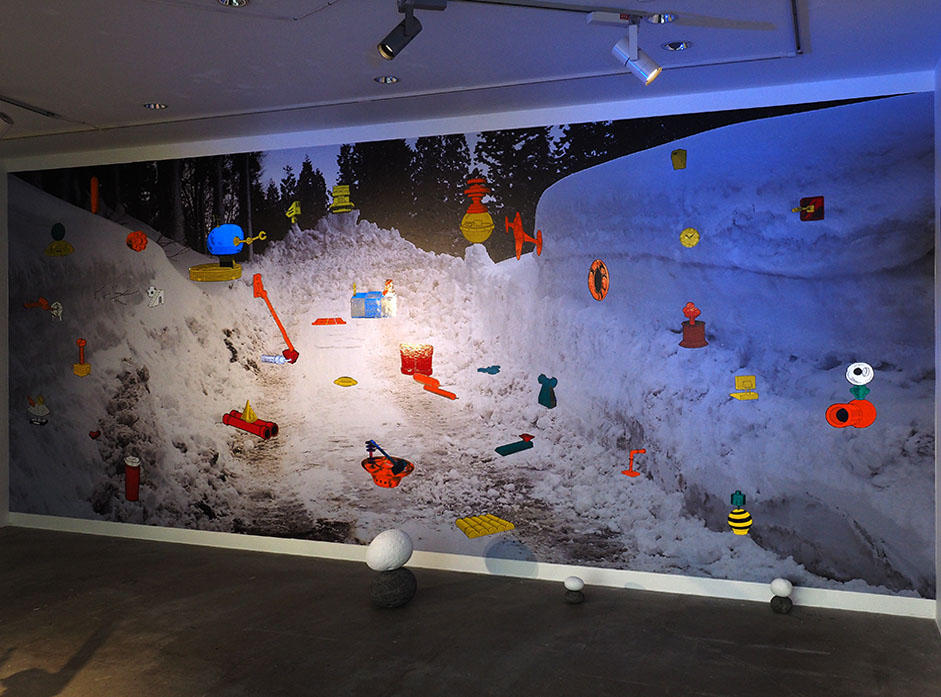 
G: In the exhibit of gallery, unlike in Tsumari, you have stone sculpture.

K: These stones came from the Shinano River in flowing in the Ttsumari area. Shinano river stones are round and so cute that I wanted to make them art pieces!
The stones are cast into that on the stone with white resinous material. The appearance is like snowmen, which will hopefully convey my idea to visualize the snowfall in an artistic representation. In other words, a prototype of the snowfall exists underneath. Combination of the stone with snow also develop the more complicate time scale, that is, stones have lived long years to come into this time, which will be overlapped with the time scale of ephemeral snow varnishing in summer. 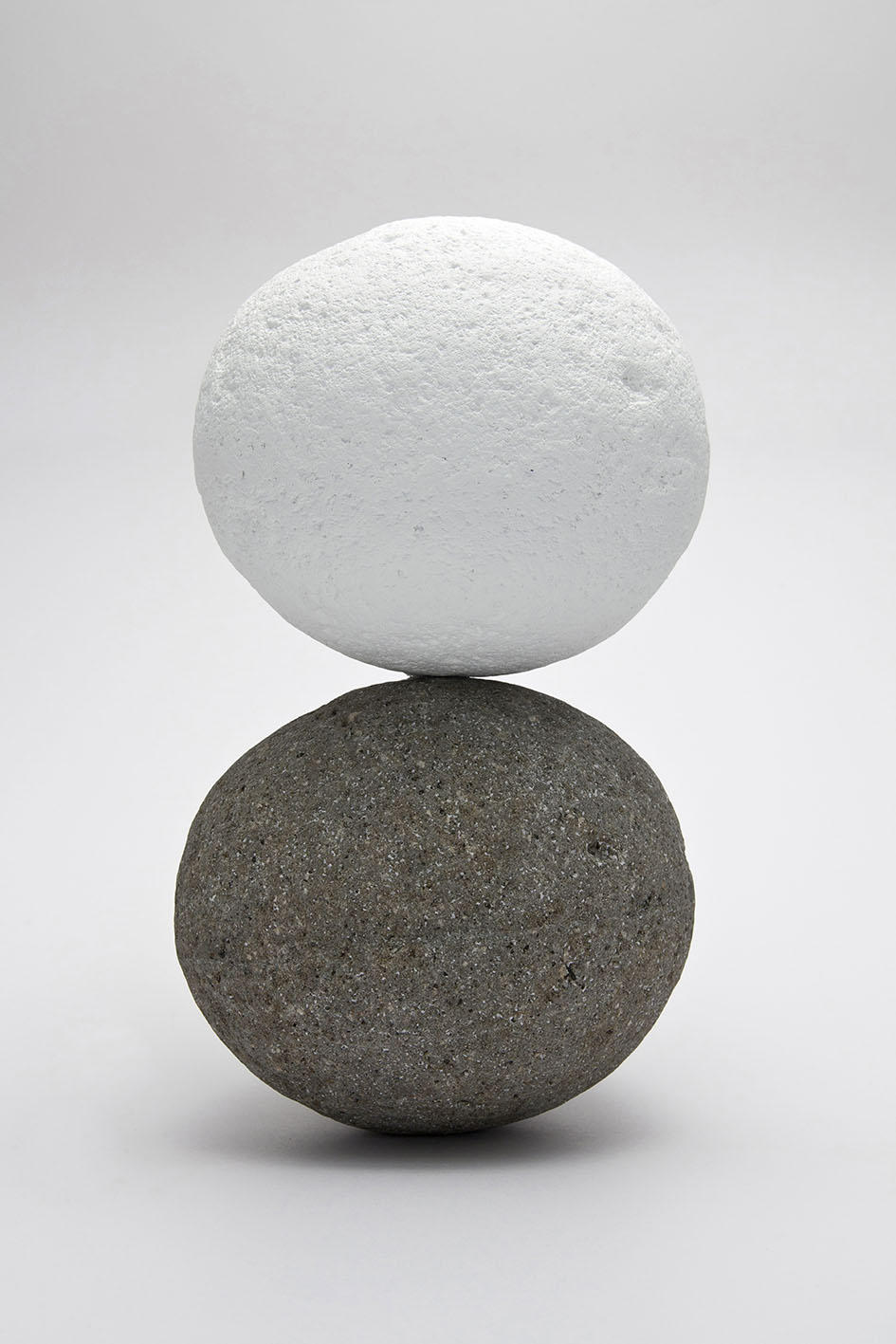 
G: You have developed the series White Discharge with snowfall landscape as a subject. Have you long been interested in the new landscape or new form with snowfall?

K: Yes, I am interested in the fictional image produced by snowfall. The sound you hear at the gallery is edited from the interview of the drivers of snowplow, telling about, for example, difference of their lives between summer and winter. During the winter they are stuck in the houses allowing time to reflect on something, and some are even writing stories. In particular, many of aged men are producing novels.
The change in lifestyle because of the snow may contribute eventually the birth of fiction, which I find extremely interesting.

G: I agree, for your work help us to imagine the opposite season of snow season in midsummer or the lives developed in the area. We hope that many audience will experience the “summer fiction” through your works both in Tsumari and in Daikanyama, Tokyo. 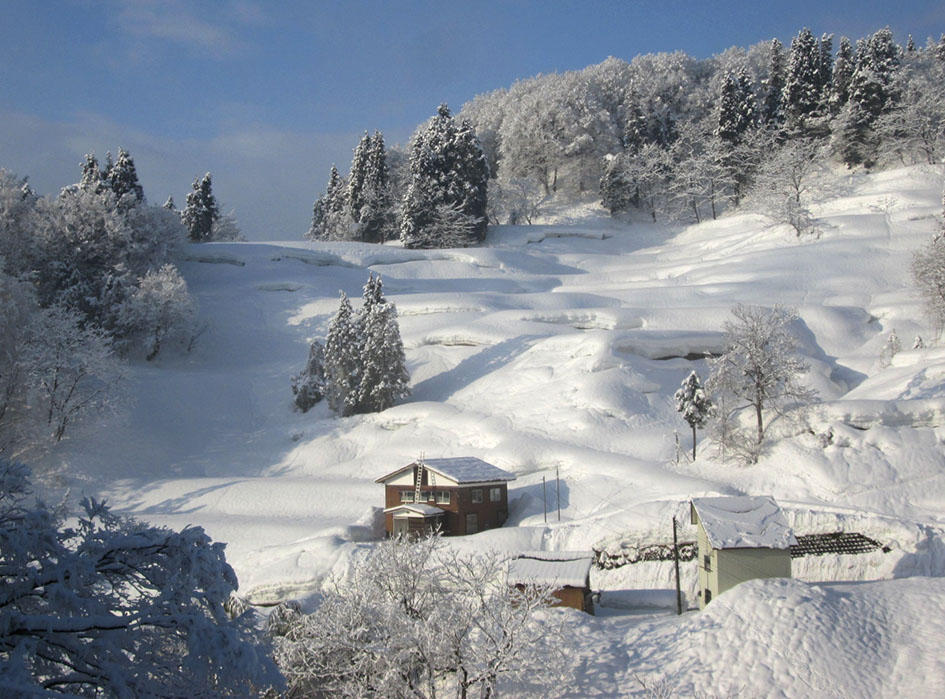