We interviewed Teppei Kaneuji on his solo exhibit at Art Front Gallery.
This show developed the various series created between 2013 and 2021, combining different objects in the field of image, technology, context or value. The artist reveals the core, common factors among the materials and representations, or his creative attitude vis-à-vis his work.

This exhibition is composed of tower series and collaborative works executed in a number of foreign countries.

Tower series continues since 2008 in various form. The closest form to original one in his formative years is on view this time on the wall. At first, I drew a tower without sense of scale nor detailed explanation of the inner space, and that was the starting point for me.

On the basis of these drawings, I produced a tower of 8m high at Yokohama Museum in 2009, housing different objects in collage, an animation work entitled 《tower(MOVIE)》．In 2017, another example《tower (THEATER)》of 6m high at KYOTO EXPERIMENT International Kyoto Theater Art Festival, served as the theater stage for performances. 《tower(KITCHEN)》at Kyoto Art Center transformed the kitchen of its café into the sculpture work as the tower. Ongoing project includes the 《tower (BUS)》, organized by 21st Century Museum of Contemporary Art, Kanazawa. 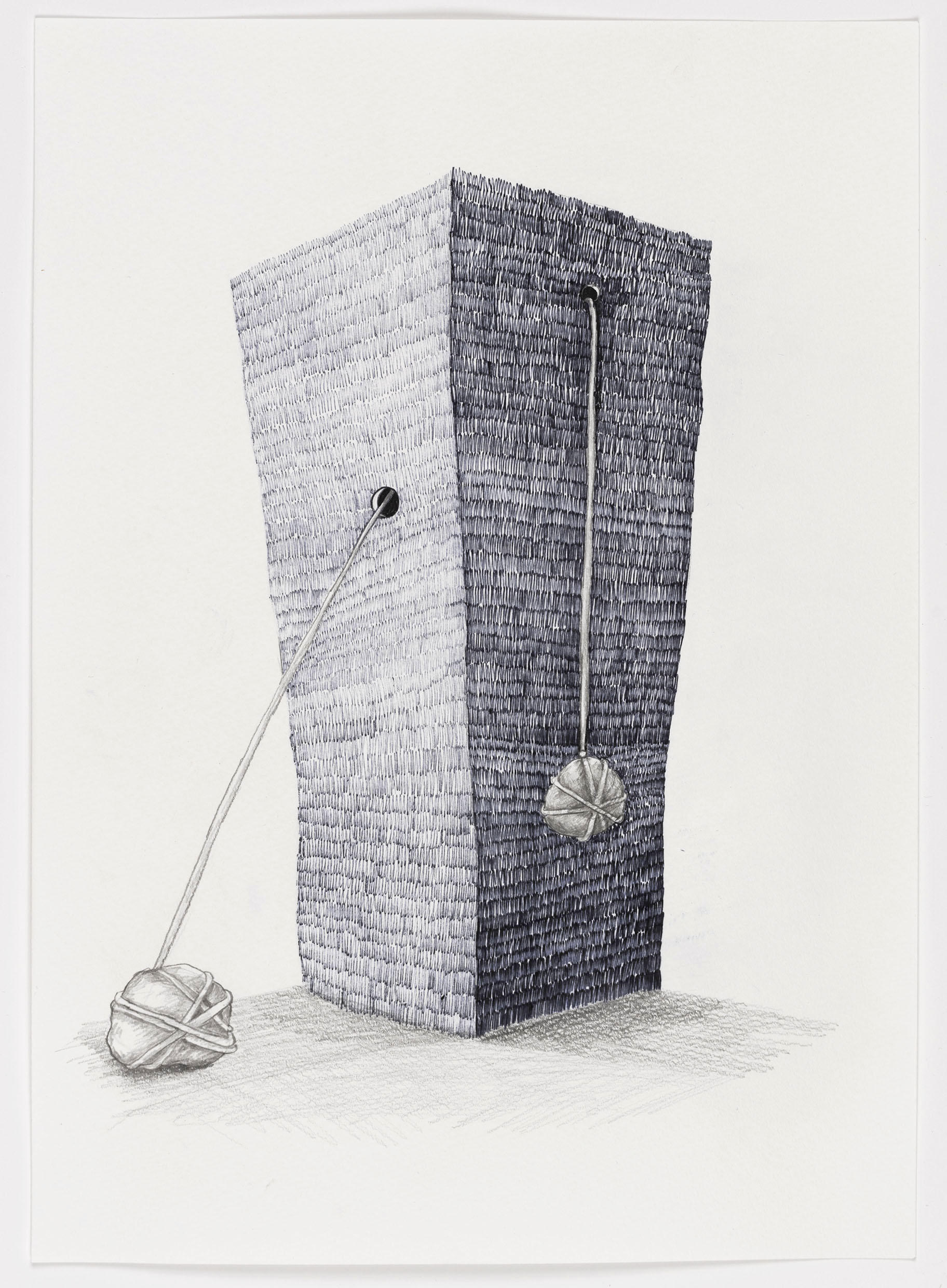 《tower / 2021 #1》2021 paper, ball-point pen, pencil 350x250mm
These drawing series were produced newly on this occasion in the form close to its original work in early years. 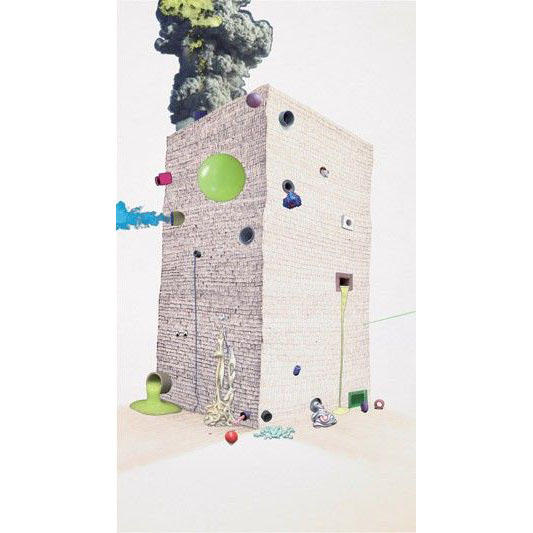 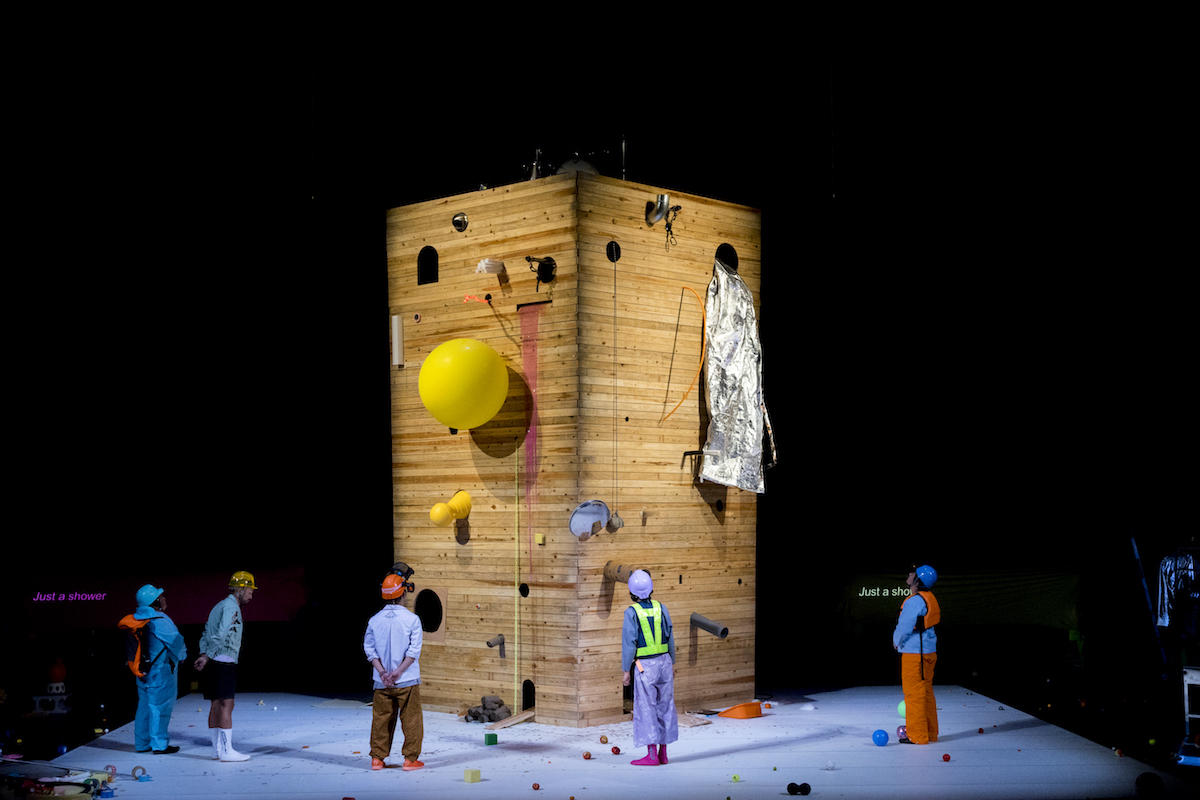 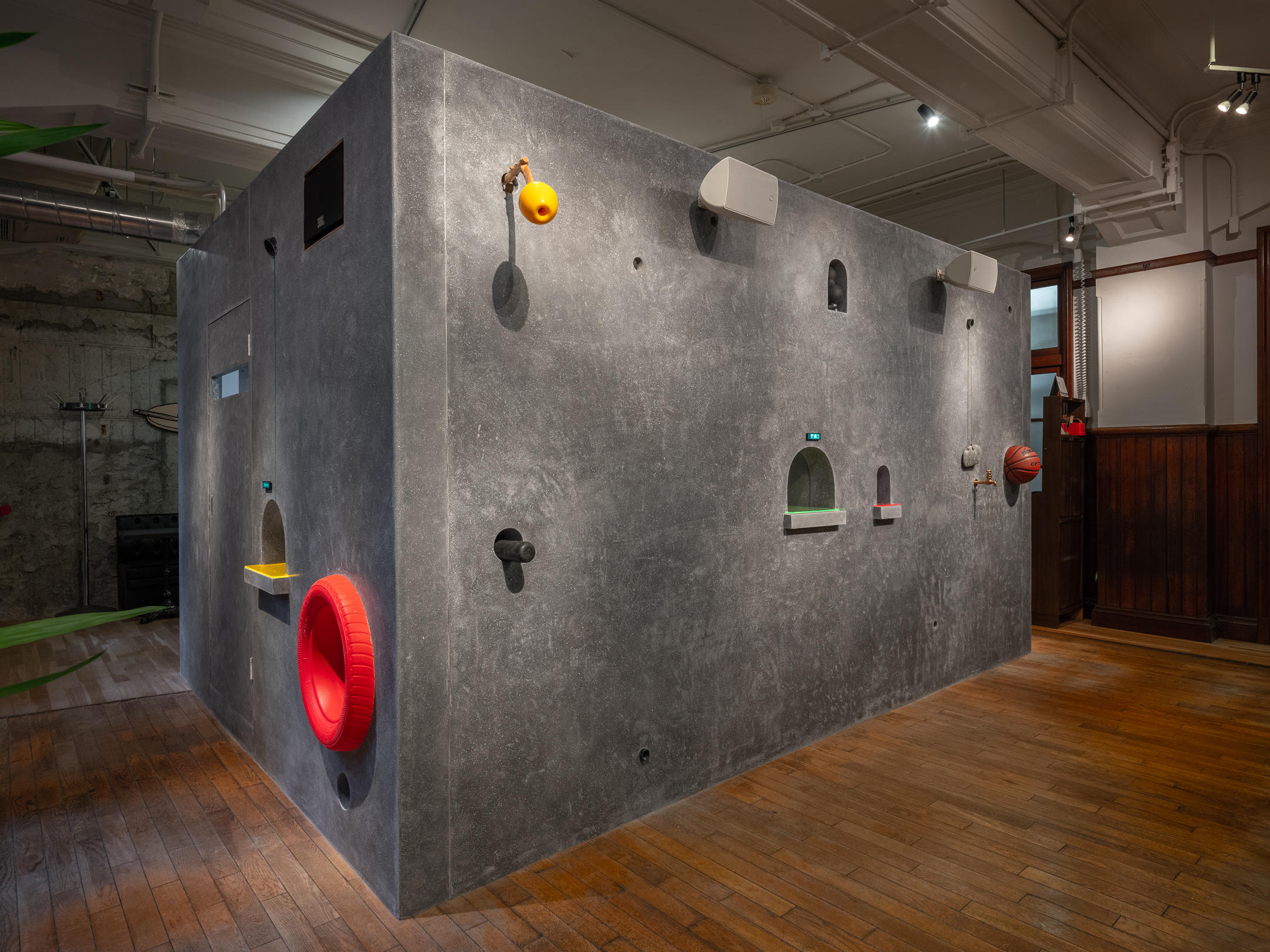 This tower series has its holes on the box-like building, which induces the possible imagination or “connection” with the outer elements through the holes, confusing the sense of scales.

In Oku-Noto Triennale which was open by November 5, 2021, I created 《tower(SUZU)》using local architecture with the holes. In Suzu City of Ishikawa Prefecture, venue of the art festival, Kiriko Warehouses (to house the huge lantern for the festival) are scattered through the city. These warehouses, if taken for granted by the local people well-installed in their everyday life, may look to outsider such as me something impressive for they are in such variation in the size, and the function of the warehouses remain unknown to the visitors. To me, these warehouses connect the ordinary and extraordinary, a strange existence hiding the interior, and these elements are in common with my work. That is why I took this motif of Kiriko in my artwork. 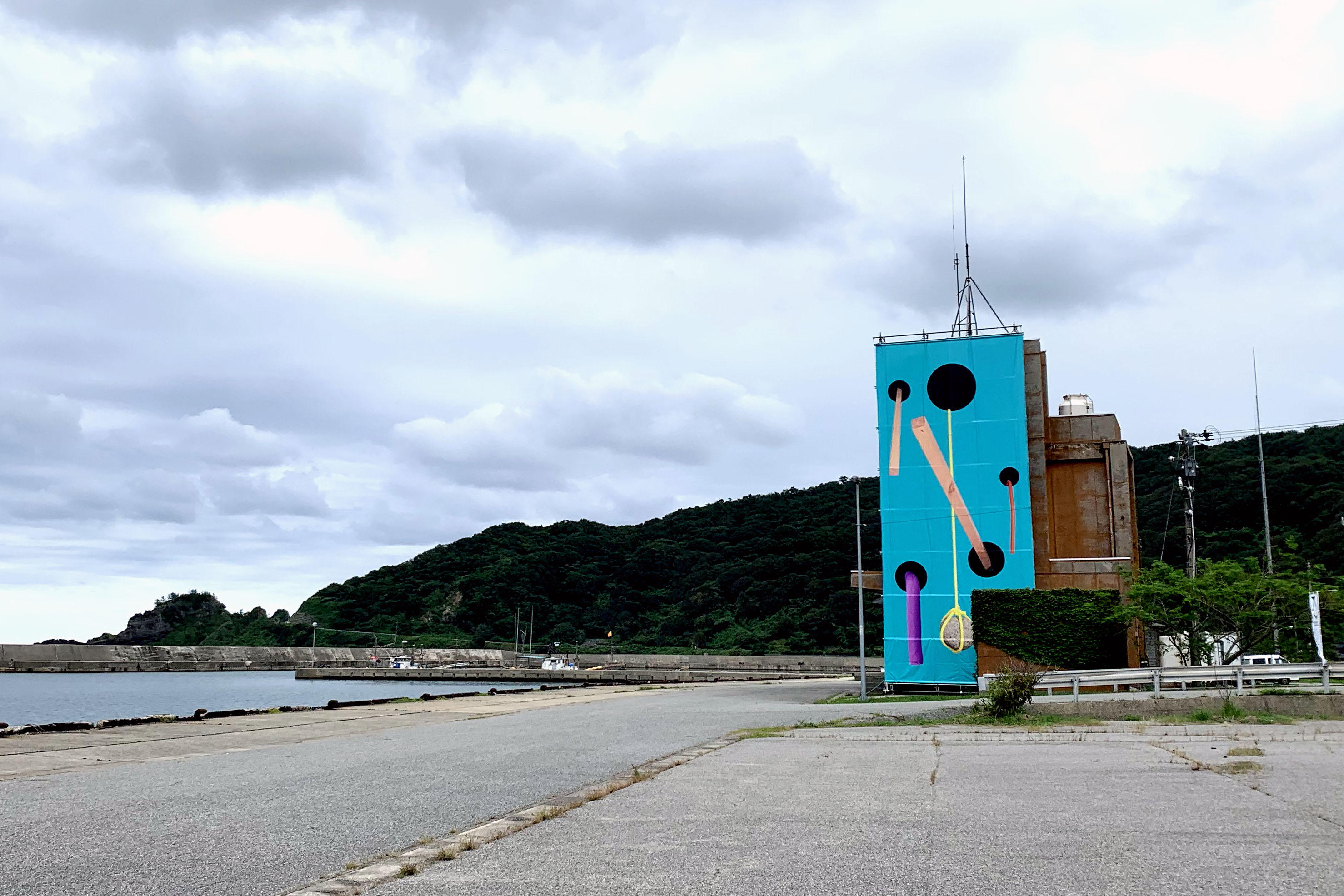 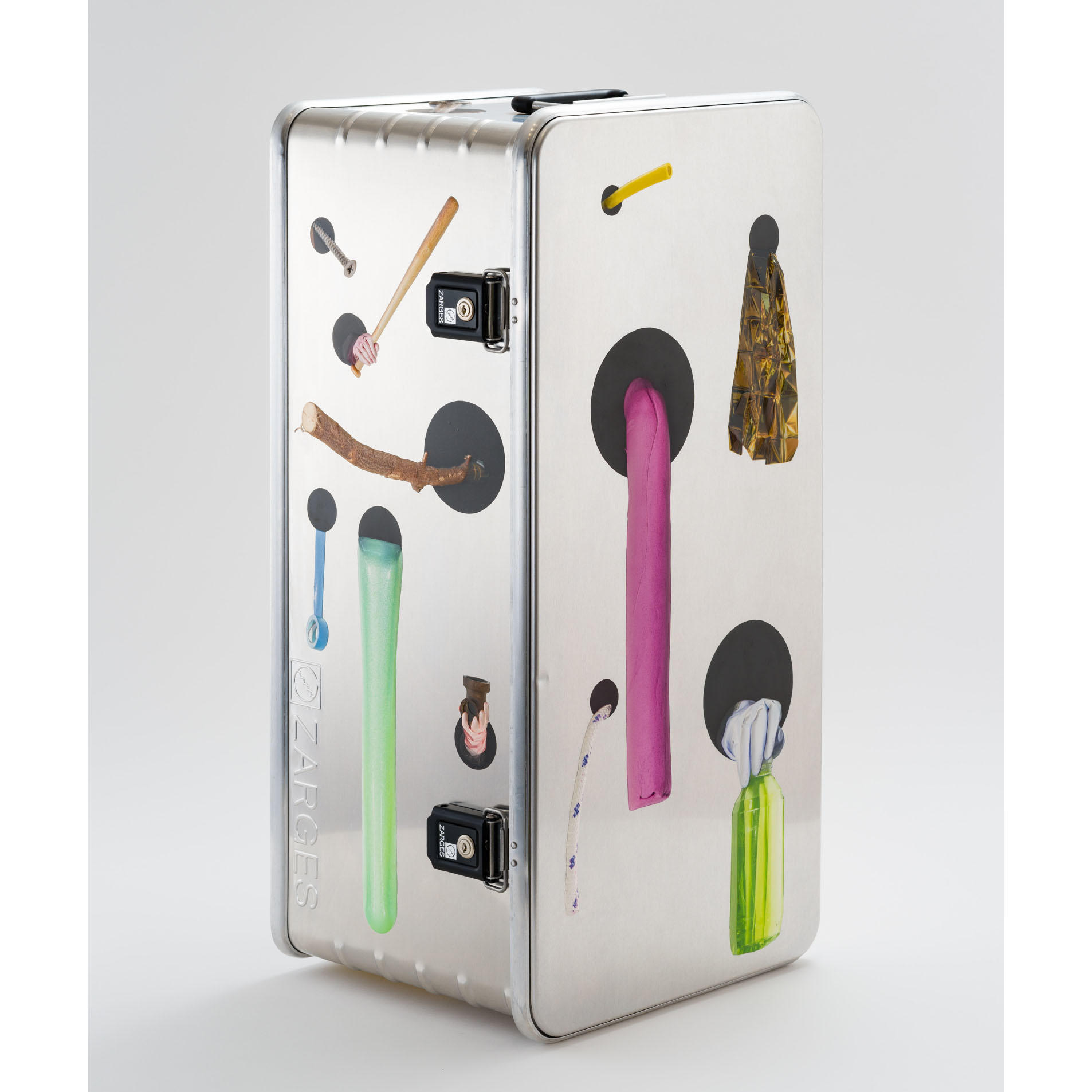 Collaboration as collage
My continued motif or way of thinking includes the idea of “collage” connecting different things. It is not limited to the objects or images, but also the technology, context, values are included to this system of integrating the different things into a new, totally alien thing. In this sense, I try to collaborate with a number of occasions. 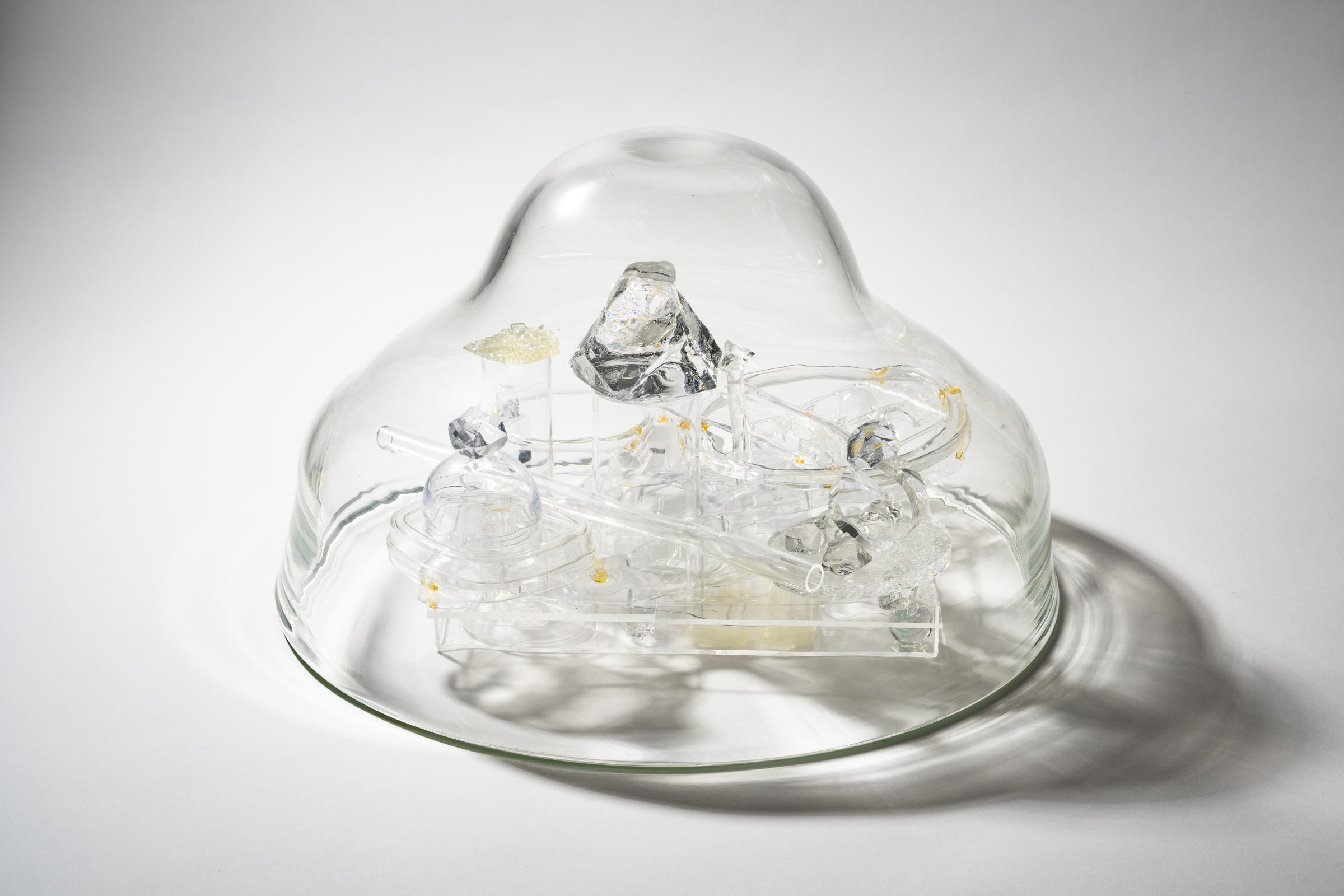 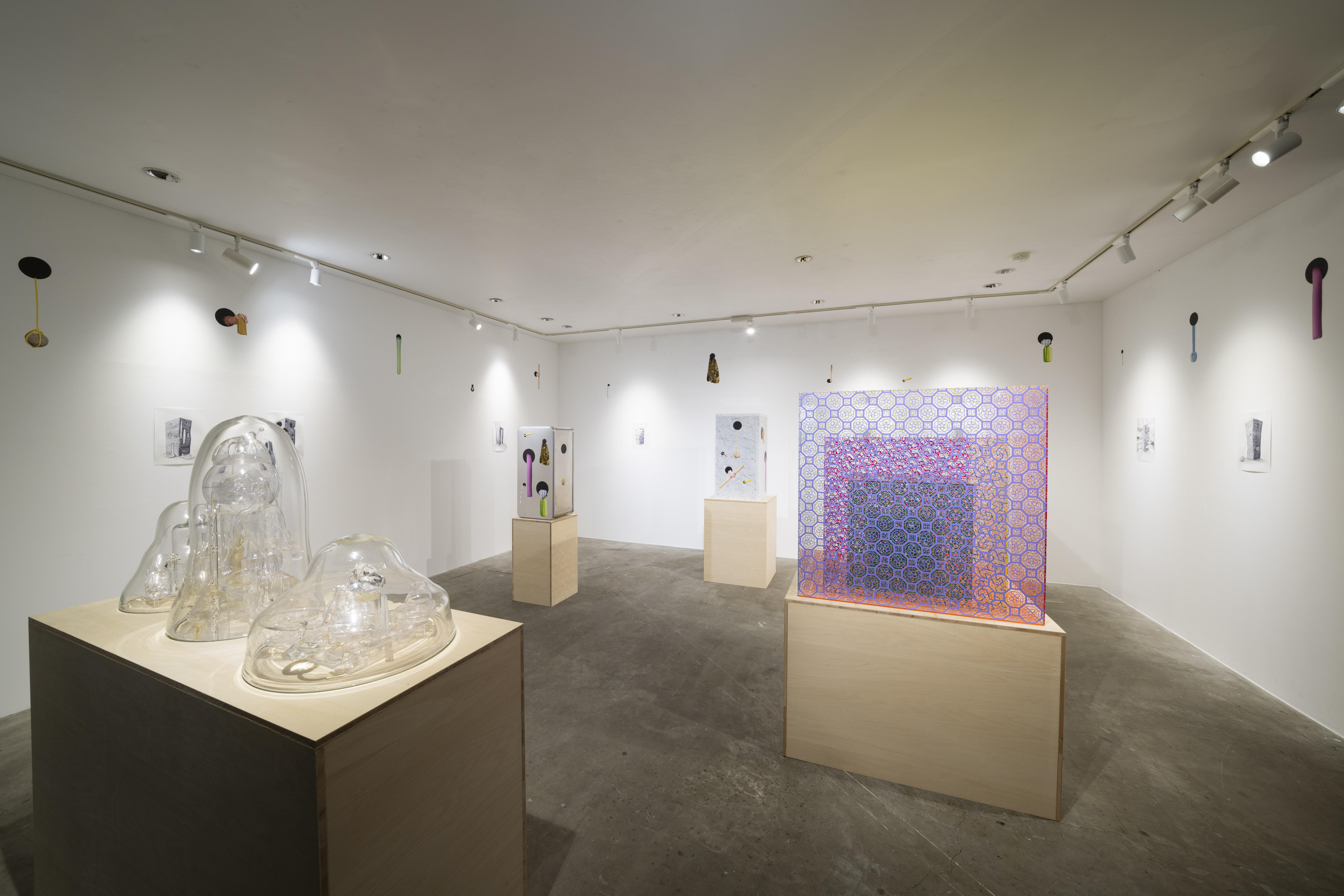 《Model of Something #7》, four boxes of different sizes have layers screen print with motifs. It was made it with the collaboration of the staff at STPI or a print studio in Singapore. Singapore is a multi-popularized country composed of Indian, Chinese, Malaysian and British people. I imagined their everyday life, so I screen printed respective traditional motifs on each plane of their people. Combining these motifs into one work may generate complex motifs and it looks different if you walking through in front of this work. 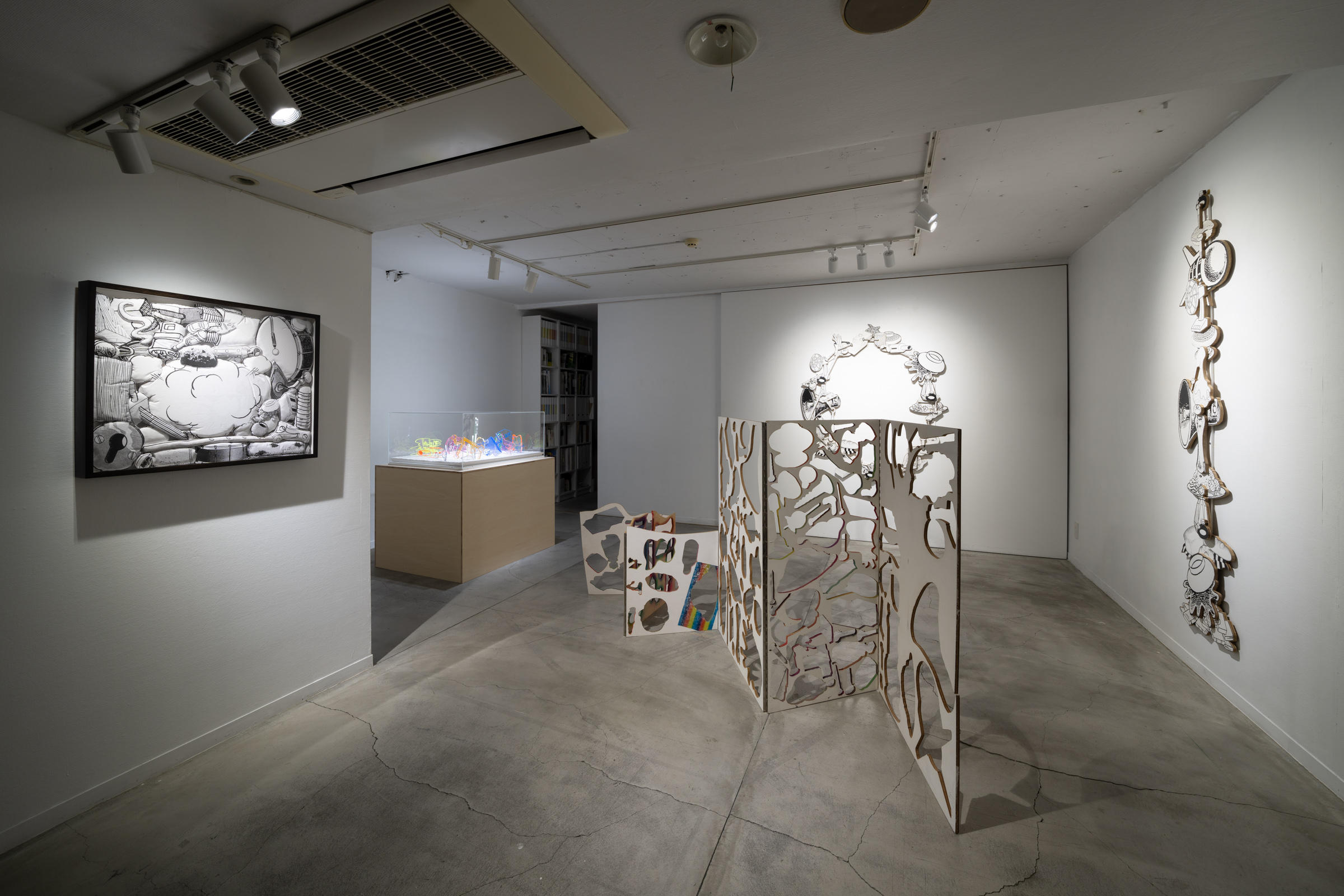 All the works exhibited in the second room are from STPI.

The folded screen work in the center came from the remaining part of the wood panel from which the relief works on the wall were cut out. In addition, the panel served as the stencil form for another piece of two dimension, then finally it became an artwork. In the process of production, the “rubbish” became a tool and artwork, the existent and non-existent are ambivalent in its inversion process.

This image is like the hole of the towers: according to the place, viewpoint or time situation the meaning or value of the things may differ, exchanging its elements.

These images of the work will integrate each other through combining “form” and not content of the motifs. Different scales will be integrated into one mass, and at least I aim at such goal. This apply to the works created in STPI, and the “image of comics ＝ formless” will be materialized, which is the starting point of the creation. Therefore, the cushion or acrylic board are used with the same motifs in different backgrounds of the material. 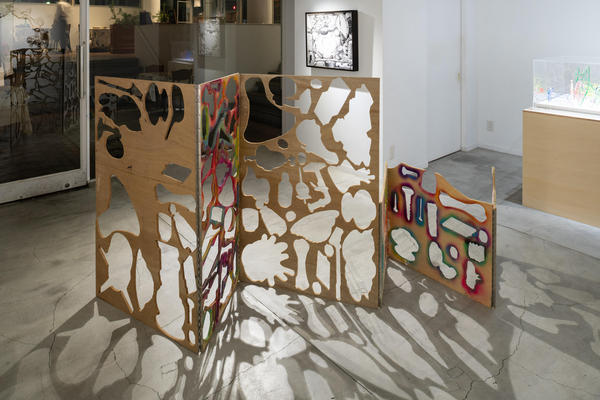 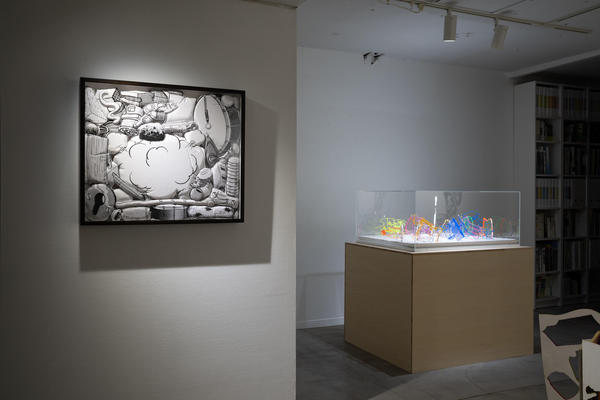 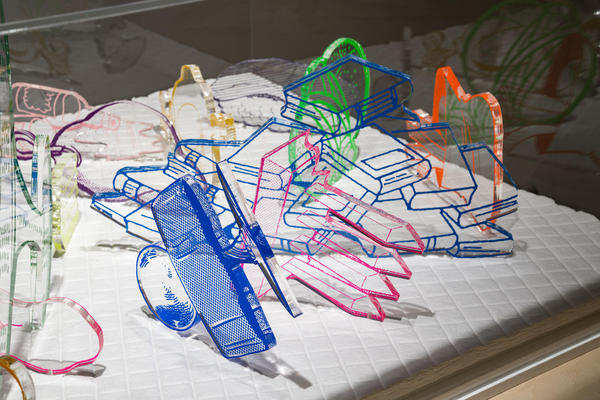 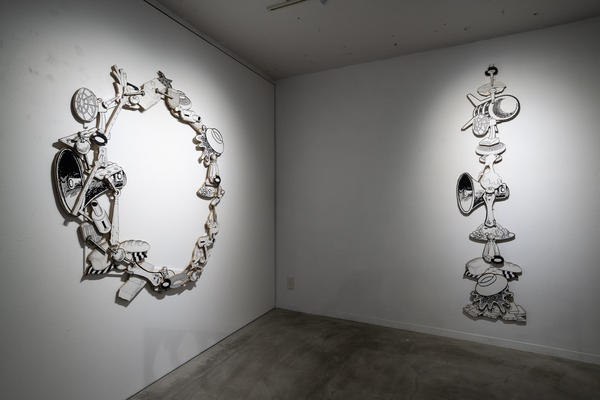 《Smoke and Fog(Ghost of Material)＃38 》is the series to return to my original point of sculpture after my itinerary in collaboration, in theater among others. Briefly, this is a series of monotone assembled with each other to create a sculpture, just as the same case of transparent glass. The initial function is sometimes used while not used in other cases. Also, sometimes the form has relationship with the original function while in some other cases not. Surprising illusion should be coordinated, and thus I keep on creating something in harmonize to strange sensation. In this series too, there are holes of the metal, dealt as the monotone material.
Ghost of Material, as the title, is issued from my concept that assemblage of the different material might lead to a situation where the materiality will float. The meaning as well as use of the forms will be revealed in the course of the creating process of applying the forms or not.

The exhibition of Teppei Kaneuji “Smoke and Fog” will be through October 3rd, 2021.
We are pleased to announce the characteristic of Kaneuji.