Today, in transformation of global form, Teppei Kaneuji is questioning the contemporary meaning of "sculpture"!

A large-scaled solo exhibition "S.F. (Something Falling/Floating) will open on April 16, at Ichihara Lakeside Museum in Chiba Prefecture. Prior to the newly produced works for the exhibition, we introduce here some of his works so far in the creative lineage of the artist.（for inquiry ofavailable works of Kaneuji, please refer to：contact@artfrontgallery.com ）

【Message from the artist for the exhibition】
This exhibit will be an installation on the reflection of “sculpture” which elaborates my personal standpoint or given space. It is based on various collaboration I have achieved in the past five to six years ranging in cross-bordering or site specific projects in art festivals I have participated in.
If “times of uncertainty or anxiety” often comes up in our discussion, it seems to me that there have been no era or period without uncertainty or uneasiness. I believe that this is the very starting point for creating the a real “mass” where the meaning and value is to get rid of them from the existent objects and to give birth to meeting place of forms, keeping nevertheless their vector in opposing direction. Such contrast can be applied to the relationship between “nature” and “art”, where invisible things are always floating, or mixing up through various borders. For instance, if we imagine what it is the snow clearance, flood or virus, they may take form of human, city or of a society.
――Teppei Kaneuji
Starting over again the sculpture 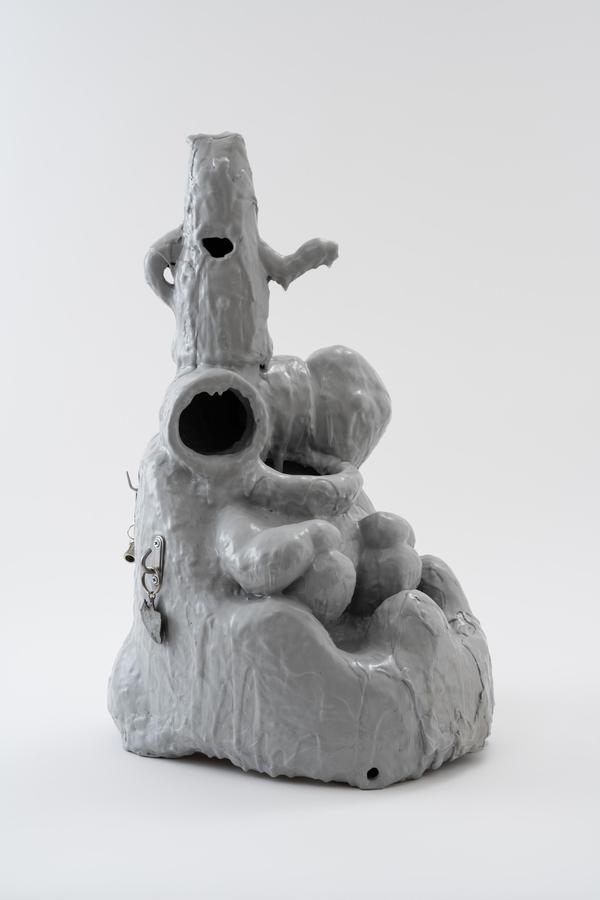 《Smoke and Fog(Material Ghost)＃38 》, exhibited in the solo show at Art Front Gallery in 2021, is one of the works returning to the starting point of a sculpture after period of collaboration with others. Assemblage of the variety of monotone material, with or without function of the objects themselves, with or without relationship between the forms. Kaneuji creates his form struggling against discomfort as well as comfort. Even the “holes” are composing elements of monotone, just like other materials such as metals.
Its title “Smoke and Fog” is inspired by a mixture of images which are different but similar, just like smoke and fog. Imagination can be generated with both fiction for fiction and fiction with real materials: important is that the action of imagine is what is in common for the works of Kaneuji.

“Material Ghost” may indicate the expectation of floating materiality through combining different materials, removing the mean and function, or connecting them. This “Material Ghost” Series was exhibited in Reborn-Art Festival 2017 in the city of Ishinomaki, Miyagi Prefecture under the title “Boiled Daydream (Material Ghost / Ishinomaki) #1、#2、#3、#4”.
Kaneuji once stated that in this area of Ishinomaki, they often see the fragments of destroyed building or roads together with the new materials for future architecture and streets in its various state. “I try to create a situation where take place simultaneously demolition and creation, significance and insignificance, installation and abandon, holy and profane. “Tangible” ghost and snow balls whose timescale in melting are different are such examples.” （Kaneuji） 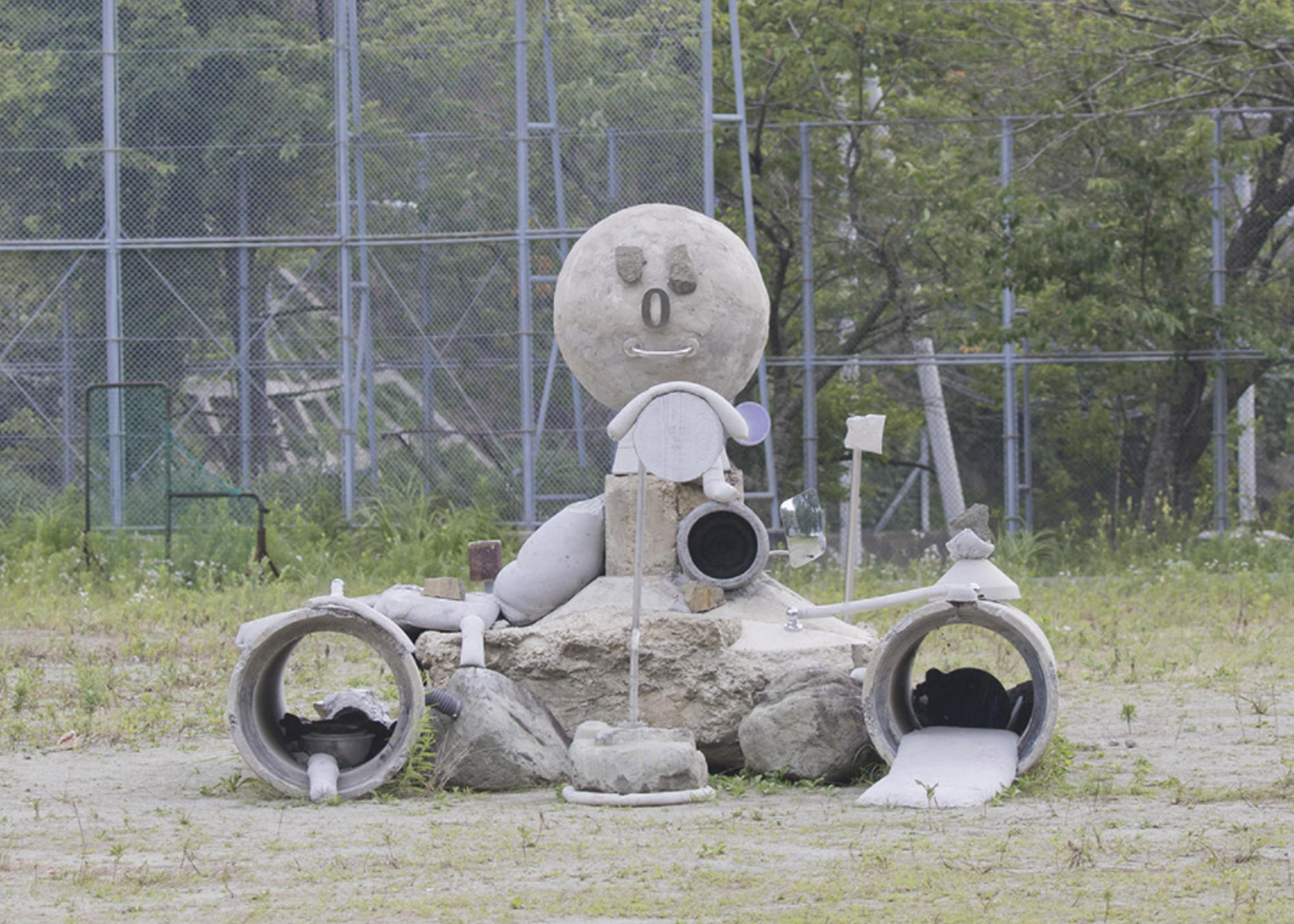 《Summer Fiction(River Stone)》, associated with the snow balls, was born out of encounter with stone from the Shinanogawa River, at the occasion of his participation in Echigo-Tsumari Art Triennale 2018. The pieces then were exhibited at Art Front Gallery as commented by the artist.
“These stones came from the Shinano River in flowing in the Ttsumari area. Shinano river stones are round and so cute that I wanted to make them art pieces!
The stones are cast into that on the stone with white resinous material. The appearance is like snowmen, which will hopefully convey my idea to visualize the snowfall in an artistic representation. In other words, a prototype of the snowfall exists underneath. Combination of the stone with snow also develop the more complicate time scale, that is, stones have lived long years to come into this time, which will be overlapped with the time scale of ephemeral snow varnishing in summer.”（Kaneuji） 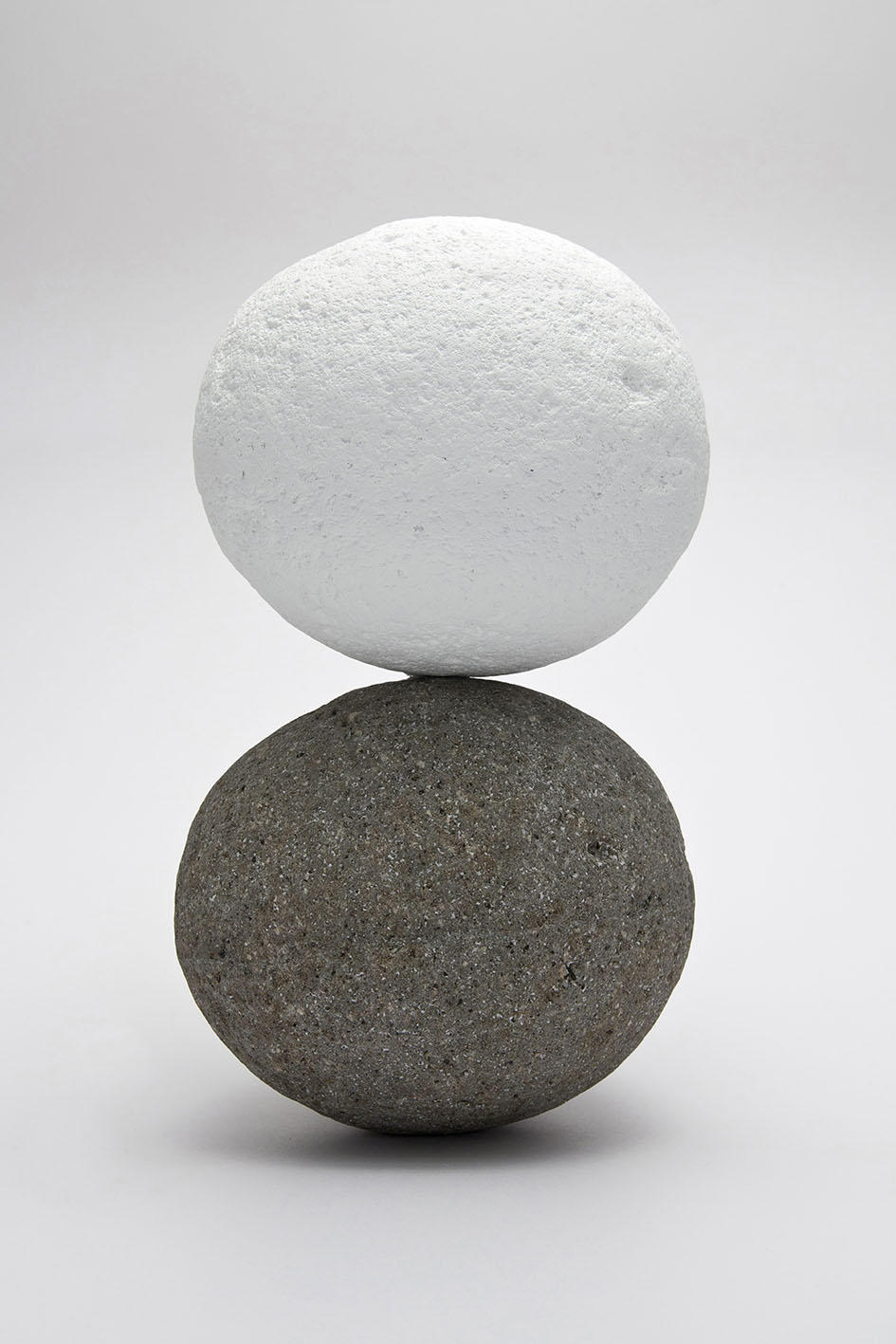 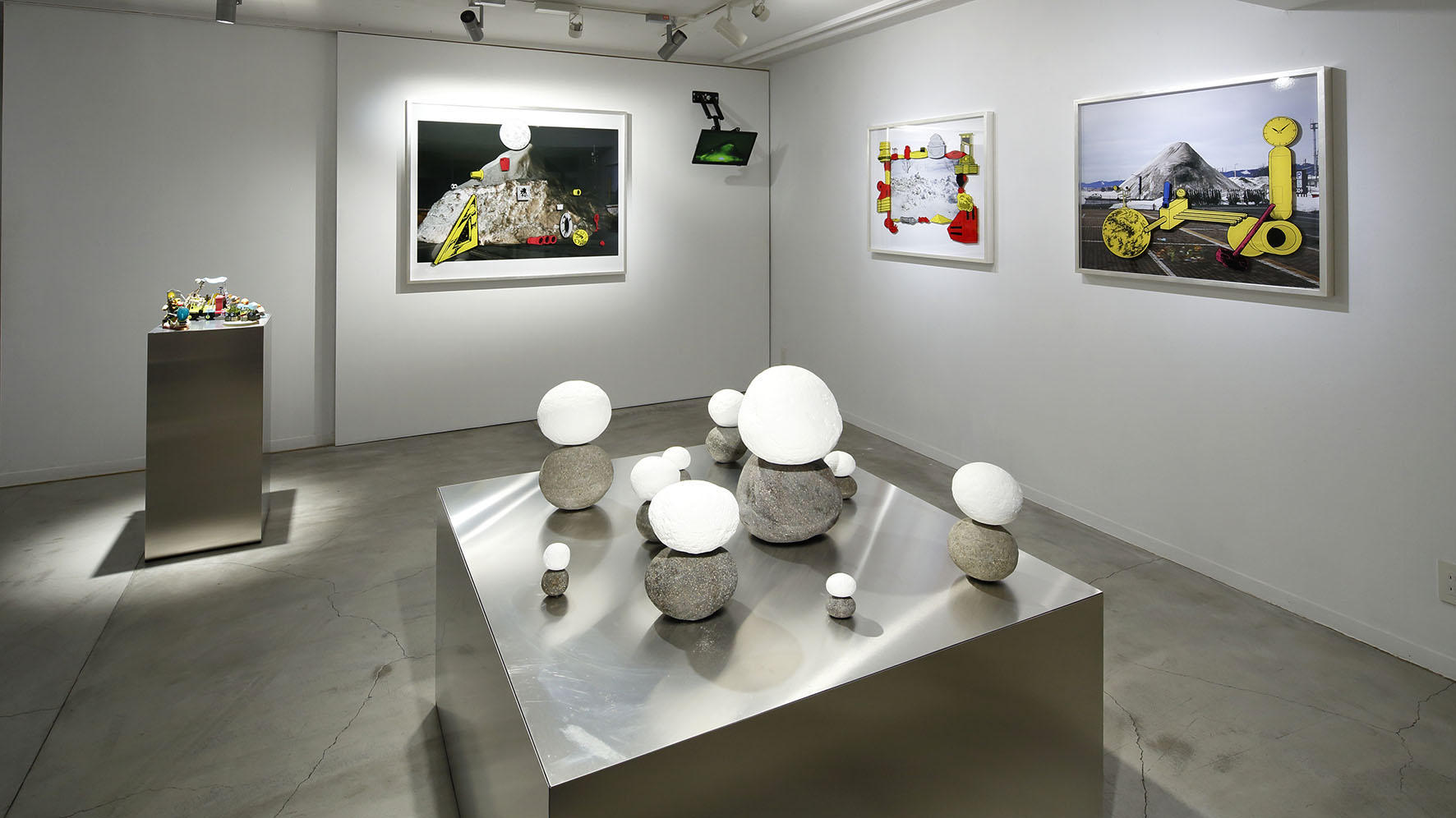 In this same exhibit, “snow” as another motif for the two-dimensional works. The series entitled 《Games,Dance & the Constructions (snowplow) 》was produced out of research of Echigo-Tsumari area with heavy snow, visualizing the statement of the local worker as an inspiration for the works saying “we have this area totally different world according to the presence of snow”.

“What interested me on the other hand was the snow mound created artificially. They are rather dirty grey mound, as you see in these photos or video, had been produced in the parking area of shopping center to pool the eliminated snow. They were giving a presence, outcome of the battle between men and colossal natural phenomenon showcasing a form of collaboration of men and nature at the same time. This product impressed me most.” (Kaneuji) 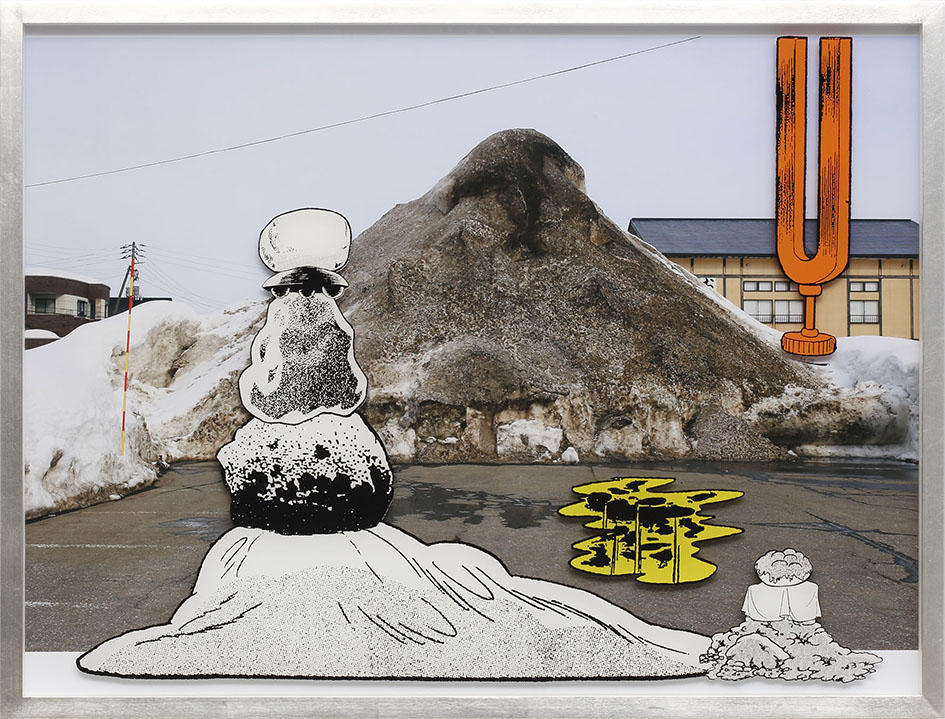 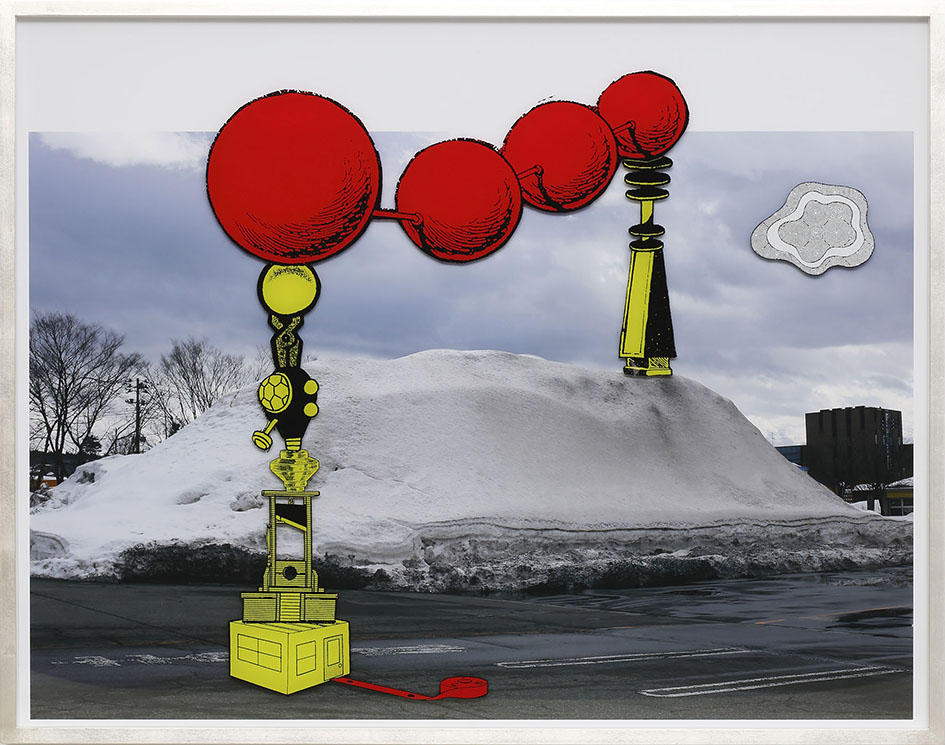 《Games,Dance & the Constructions (snowplow)》includes collaged image of SF comics in the seventies to the eighties, favorite of the artist. According to Manga researchers, these old comics present the detailed background more minutely than those of today, trying to showcasing more enriched world in the future through tactics of “manga”. The color of red, orange, green or yellow used for the collage refer to that of snowplow’s body, thus connecting the everyday culture of Tsumari and creativity of the artist.

Also, “snow” is an important keyword for his credited series of White Discharge. Kaneuji accumulates and recompose the variety of ordinary objects without altering their forms, then covering the surface with the white resin to finish---thus he visualizes and features the ambivalent definition of “individuals” or the ambivalent borders between the co-existing multiple objects. This series, inspired by the snow scape as well, are in the public collection of Museum of Contemporary, Tokyo, Toyota Municipal Museum of Art, and Yokohama Museum of Art, and is a masterpiece series credited of Kaneuji. 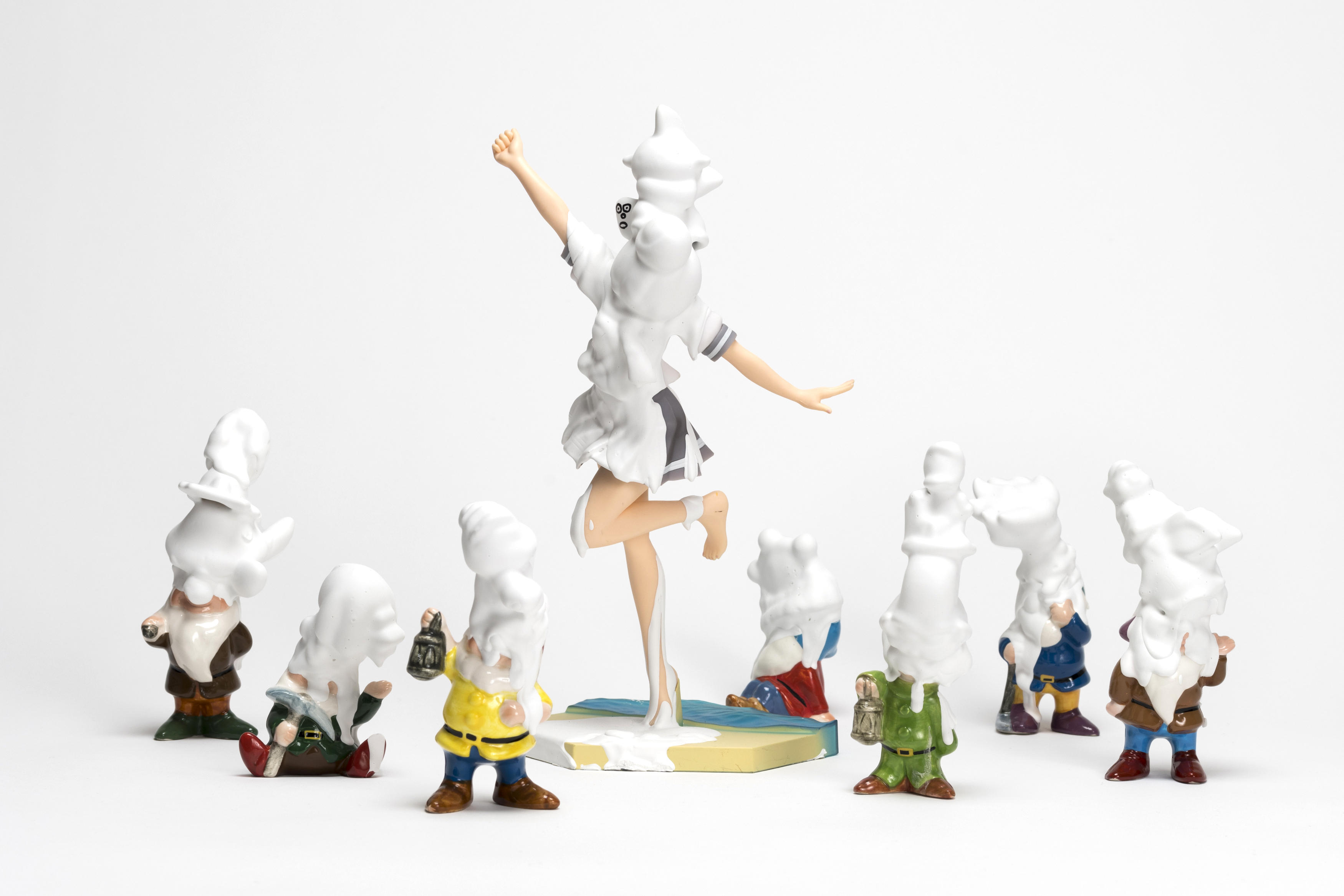 The solo exhibition “S.F. (Something Falling/Floating)” will showcase the latest works by Teppei Kaneuji who has developed a wide range of the artistic styles. We appreciate your kind expectation.

Workshop
“To think and to make S.F.Sculpture with Teppei Kaneuji”