Chihiro Kabata : the World Crosses Over the Mirror

Art Front Gallery will present "the World Crosses Over the Mirror", solo exhibition of Chihiro Kabata who had a solo exhibition last June.
For more information on the artist's profile and works, please kindly check the artist page linked below.
This is the third exhibition for her to show the work at Art Front Gallery since her first show in May 2010. The time when I first met Kabata, her works were mainly two dimensional works having shiny surface painted over paper with a ballpoint pen. This may be the impression towards her for most people at that time. But, it does not mean that she did not create three dimensional works. There was a work piled up several layers of papers and an acrylic three dimensional work, its the surface covered by black ink. Then, she presented large transparent fabrics which were hung from the ceiling at the MOT Annual. She used a mirror and a reflection on black water surface as an element of the work in her solo exhibition at Art Front Gallery last year. At Art Forum Azamino held in the beginning of this year, she has started creating uneven mirror surface work besides shiny ballpoint pen works. Visitors’ own shadows being reflected on the works are now becoming the significant element of her works.

This artist said few years ago when I met her, using a ballpoint pen, as a material, itself is not the most important in her work. The black surface made by ballpoint pen tends to be seen as a result of her endless repetitive action like a shrine maiden being by mysterious power. I think that there was a luck of discussion on how the viewers would confront the work, after the work is completed. We may have been focusing too much on the state of the artist’s individual that “trying to catch something invisible” while straining our eyes. There are still many fans who wish to see her ballpoint pen works even now, and of course, she has energy and time to create the ballpoint pen works. But, looking through her recent changes in work-style and choice of material such as mirror and water, I see luster and reflected dull shadow of viewers, both which has been foreshadow during the artist’s early practice, becoming even more important aspect of her recent works. Basically, it is impossible for viewers to understand an inner individuality of the artist. What the viewers can only see may be reflecting of their own shadow from the beginning, thus, a mirror which reflects viewers and the surrounding area is the significant material as a ballpoint pen.

In this exhibition at Art Front Gallery, she will use light as a significant element. When mirror works have been developed, light should be the important element at the same time, and a mirror, like a window, to connect this world to the other invisible world should be necessary as another element. She is also working on an installation work which is constructed with lines stretched in a space. Each exhibition is merely one waypoint for this artist developing rapidly. Kabata has been trying to catch invisible being by covering the surface, and her works will surpass her private boundary as an individual artist. I believe her works will exist as an opened subject for visitors as this exhibition reflect their inner world like a mirror. 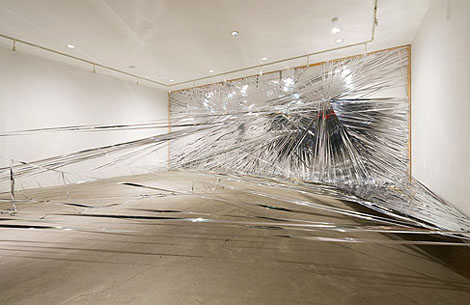 exhibition view of "the World Crosses Over the Mirror" (installation, untitled)