We are pleased to announce the solo exhibition of Chihiro Kabata will be held at ART FRONT GALLERY. One year since her last exhibition at our gallery, she explores a new direction from her past monochrome world.

Exhibiting her new works for Art Stage Singapore 2014 specially only for 3 days from Fri. 29th Nov. to Sun. 1st Dec.

Supported by Kashima Corporation
Many artists work in monochrome even though our visual world is naturally coloured. It may not have been until the arrival of photography in the 19th century that artists thought of making large-scale monochrome pictures ? apart from a few exceptions, where technology required it, such as in prints and drawings. There were, of course, other notable exceptions, such as Ingres’ Grande Odalisque, where the lack of prominent colour was used to enhance a sense of volume.
Chihiro Kabata uses black ball-point pen as her basic tone. With this, she articulates something about the ambiguity inside her mind , and about her acts of seeking to grasp this. Her work is aimed at expressing something invisible, and to that extent monochrome is appropriate, as her objects of depiction do lack colour, unlike things in our actual visual experience. Monochrome may also be a logical consequence of her use of the ball-point pen, for her mechanism of expression is close to extemporaneous drawing.
Over the last few years, Kabata’s monochrome has undergone a shift. Her early pieces had forms that remained rather inchoate, with finely drawn outlines merging into white. Now, with the help of the new medium of mirrors, she uses ball-point pens to render black surfaces as shiny chunks and with more defined outlines. This increase in volumetric sensation reduces the impression of improvisation, or instinctive drawing. However, while her work has become more interesting, well thought-through and controlled, it also risked falling into formalism.
While I was thinking about this shift, Kabata made another change. She began using coloured ball-point pens. We first saw this at the beginning of the year in her solo show in Zurich. Stationers sell ball-points of many colours, and blue-black is no longer the archetypal shade. Kabata’s work had previously gained clear outlines in monochrome, but it now began to take on colour, yet at the same time to lose the clarity of outline and revert to the original improvisation and ambiguity. She has much expanded the possibilities of her work through this controlled use of colour. The art scene today demands work be exclusive to one particular artist, and it is no longer enough if it is a search for form, or the manifestation of an individual’s consciousness ? for all that artistry was precisely those things throughout history. Contemporary artists must present something unseen, and they must constantly change as they tackle new materials and themes, our contemporary times always in the background. An artist has to make sure they have something to say in common with the era. At the present exhibition, Kabata stands at the door of this new development. As she oscillates away from her previous monochrome world, we look forward to much more of this type of work from her. 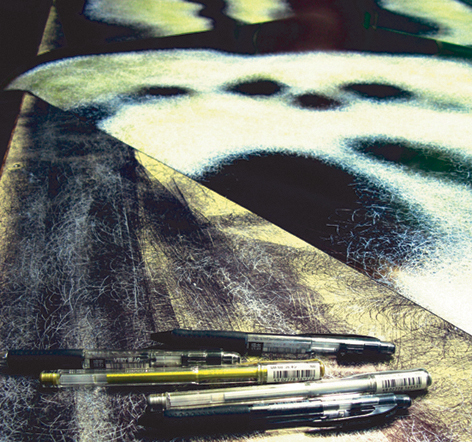 Kondo (K)：Titles of the works in the exhibition look different from your present years. For example, there are works which have names of philosophers or novelist. Can I say that they are from the books you like?

Kabata (CK)：I did not make the works imagining of their writings, but I just wanted to give specific names to each work. Of course, I would not put a title with the names of people I don't like. There may be names of authors who the viewers like. This time, there are also works with the names of ocean. Many of them are those where I've never been, and there are even some titles taken from the ocean on the moon. It is possible for me to develop my imagination from the specific names, but titles may also help viewers to imagine something from the work. 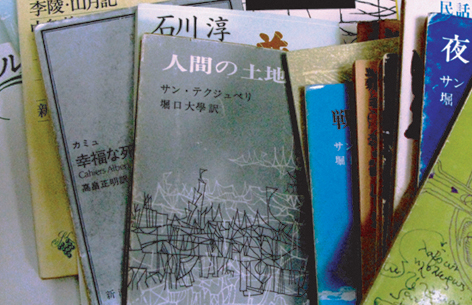 TK：You have been creating works using mirror or creating works by drawing black circle which reflects the surrounding space. In this sense, your works pull in the surrounding world as a part of the work. But this time, in this exhibition, you seem to have considered arrangement of the work according to the shape of the room. Have you had an idea to change the way to relate the work and the space? Not only the work itself, but the viewer's experience of the space and the work is becoming more important than the previous years. Can you tell me your idea about the relation of the work itself and the time and space?

CK：In this exhibition, there are series of works installed in a line, around the corner of the wall. I basically consider that the works are separated individual works. Each of them has the world of its own. Therefore, they are not connected. My basic working manner is that way. I create individual works and combine them to suit the space to exhibit them. Even the works are individual works, I hope that they also look as one set of works, and if they will have the relation with the space, this may help the viewers to find another interesting side of the work. 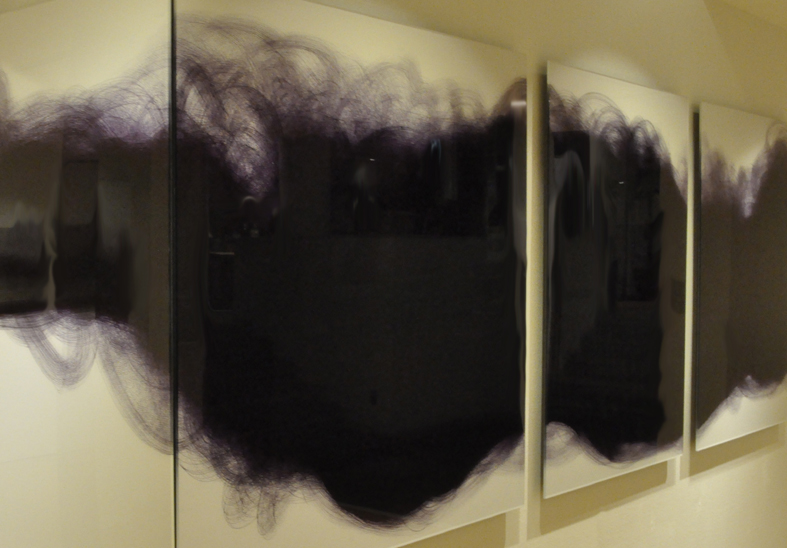 CK：Some people preferred to see my works in this exhibition through daytime, but some say the opposite way. Time and lighting changes the impression of the work. I heard from one audience that my work would fit more to the daily living situation rather than museum and galleries. I think that the living situation which that person was trying to say meant to be a place one actually lives or warm comfortable space of his own. Maybe it was a private space.

TK：In this exhibition, you are using several color ball pens instead of concentrating on using only black ink. What was your intention to adopt new colors?

CK：In the new works, I adopted gold, silver and white ink along with black ink I been using. But it was not about making the works colorful. Though I applied different, colors, the intention was same as the time I was using only black ink. I only made lines with the pen. Drawing with black, and then silver, and then, black, gold, white, and black again, and silver… Just switching colors one after another. 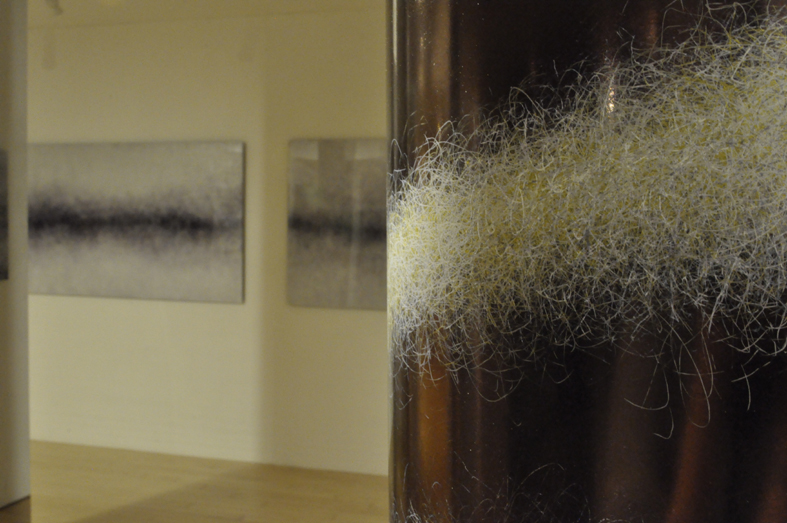 CK：By using different colors in one work, a stroke which used to be almost invisible in one dark black part of the work became visible. By making a stroke clearer, one is able to see more of my action, and as a result, the drawing received certain depth as a work.

TK：So, it was about make a stroke visible…

CK：Yes, I also like to add that gold and silver color reflects light and they sometime will be invisible or sometime visible depending on where the viewers would see. I also covered the picture surface with transparent acrylic. The acrylic will be another layer between the work and the viewers and changes the impression of the work by the reflection on the acrylic. Silver and gold are good because of the reflection, changing the impression of the work, and it is also good that when drawing and seeing, it would be hard to visually capture lines. The acrylic on the surface also functions the same way.

The motive is often simple. For example, the reason why I chose ballpoint pen was that my writing is always too strong that I always broke pencils, or any other pen. My encounter with the ballpoint pen gave me a chance to write anytime with relieved feeling for the first time in my life.

TK：I see. If I ask you about the first motive to use ballpoint pen or color pen, it would then become a fact about the artist. But naturally, there should be chance meeting or necessity to become how you are at the moment.

CK：A teacher from my junior high-school days came one day to this exhibition. It was already 20 years since I met her before, but she was talking her impression that works I'm working on is reflecting my personality. I remember about my drawing from my school days which she liked. I was drawing a trunk of tree with black lines in the class to draw green trees in the new spring season.

And another episode is from the day of an entry exam to an art university. The students had to make a pencil drawing seeing a plaster head laid sideways. I happened to sit on the side of the bottom, that is, on the side where only the round opening is visible. I had no other choice but drawing a black circle taking 6 hours. I was impressed how universities are open minded. 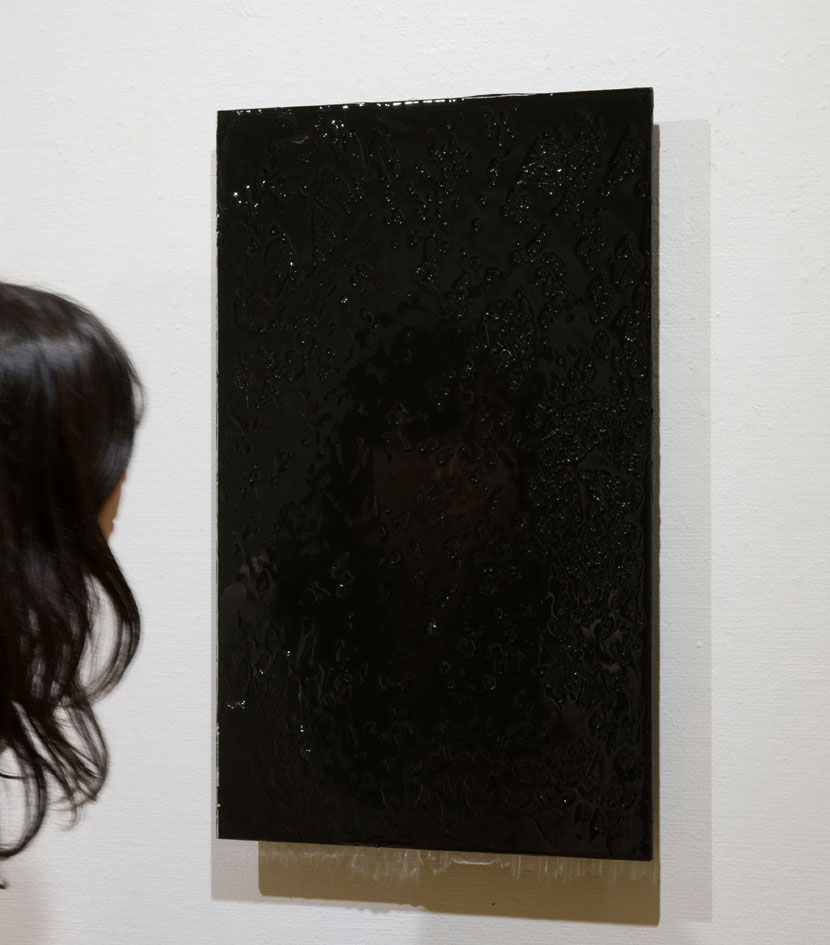 
TK：Many people must had an impression that you are an artist who is always creating a black work. How did you feel this time by hearing viewers' comments?

CK：The most interesting comment I heard this time was that my works look "Japanese". And it was curious to know that many people felt that way. I did received similar comment outside Japan. But it was fresh for me to hear that from same Japanese. Probably, I would not able to do that if I intentionally try to make my work look Japanese.