Born in Yamagata 1982. Harada has been debut with her exhibition in conjunction with Miyuki Takenaka in 2011 at Art front gallery. She had first solo show with us in 2013. Since that we have many collaborations in the field of arts included public art production in Tokyo.
The characteristics of her work are in her vivid colours and flat surface of painting as we can see, but the most important point of her painting is unusual subject that is the 3D virtual world her created through her personal computer.
In this latest her exhibition, She creates 2 different rooms are inspired by our gallery spaces. One is big installation work by painting. On the other hand, she creates complicated world between virtual and real through her huge painting of virtual reality. She creates same gallery space by 3D computer soft and draw it on canvas and hanging on the space of gallery in real world. We can see new images that has been analyzed and reconfigured by the artist in the gallery space. 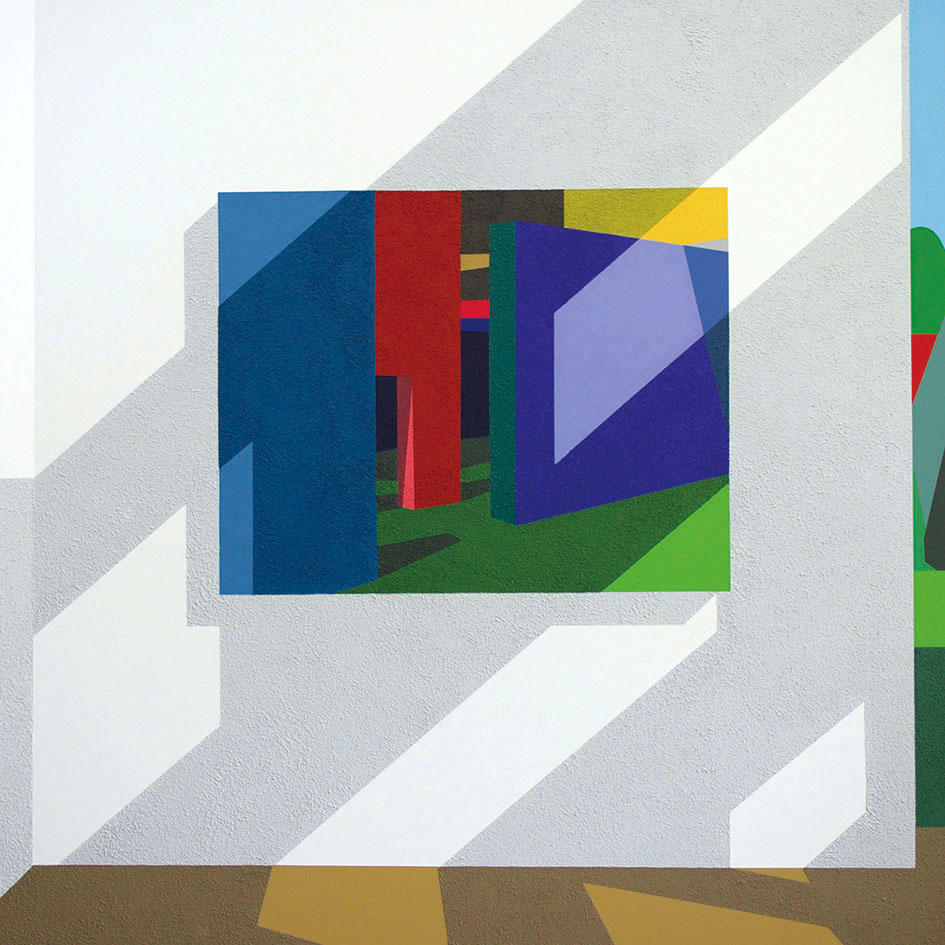 
Painting: A Window to make a Place

Windows and paintings share an ontological function. Both bring forth a world within a demarcated zone. A window is a physical hole in a wall, rendering reality of outside visible. A painting, by contrast, creates space virtually, within a frame. Murals have been found at Pompeii depicting landscapes as if seen through open windows, and equally interestingly, 17th-century Dutch paintings were sometimes curtained, like windows, and their trompe-l'œil formats were in the same manner. It is also well known that work by René Magritte asked the question, ‘is this a window, or a painting?’ Today TV and computer screens have assumed a similar probing role. The old cathode-ray TV was a chunk of glass with solid materiality, while large contemporary flat-screen TVs are devices to create other worlds within the room. What we might call pictorial-type work shows consciously chosen landscapes, but has nothing to do with the spaces in which it may be exhibited.

By contrast, a window shows something from a particular spot. In this sense, the strong notion of place we find in Harada’s work makes it more window-like. In the Modernist era it became technologically possible to make whole architectural walls in glass. At this exhibition, Harada will turn the entrance wall into a window/painting, and the floor will become one, too. In a gallery, she superimposes a virtual space onto the exhibition space, through manipulation of a group of paintings. It is important that Harada’s work is not based in realistic representation. Ever since the introduction of perspective in the Renaissance, painting has aimed to replicate actual space in two dimensions. Yet Harada’s painting is a world of computing, not of reality. In another words, while being connected to a real place, she does not imitate it so much as creating another world, which she then causes to intrude into reality.

When I visited Legoland I noticed how blocks were used to make life-size fantasy characters, which then mixed with real people. I had a sense of co-existence between reality and a data-generated space. No human shape appears in Harada’s paintings. But I wonder if there is any sign of someone or something inhabiting the world beyond looking back at us.