Iku Harada will participate in Taipei Dangdai in coming January 17th on. She has already exhibited in Singapore or Hong Kong appealing to Asian admirer of her characteristic art style to increase her renown in International art scenes.
On the other hand, she also works in Japan for some permanent works. We introduce here a commissioned work realized, over one year and a half for Senzoku Gakuen, a school campus in Kanagawa prefecture.

“HOME GROUND (Senzoku Gakuen)”, this work is composed of two paintings on the wall and four minutes’ video. The artist visited the venue of the campus several times to capture iconic buildings (hemisphere music hall) or symbolic tree of Metasequoia in the playground. She represented these icons in her three-dimensional virtual space on computer together with signs and architecture she created. 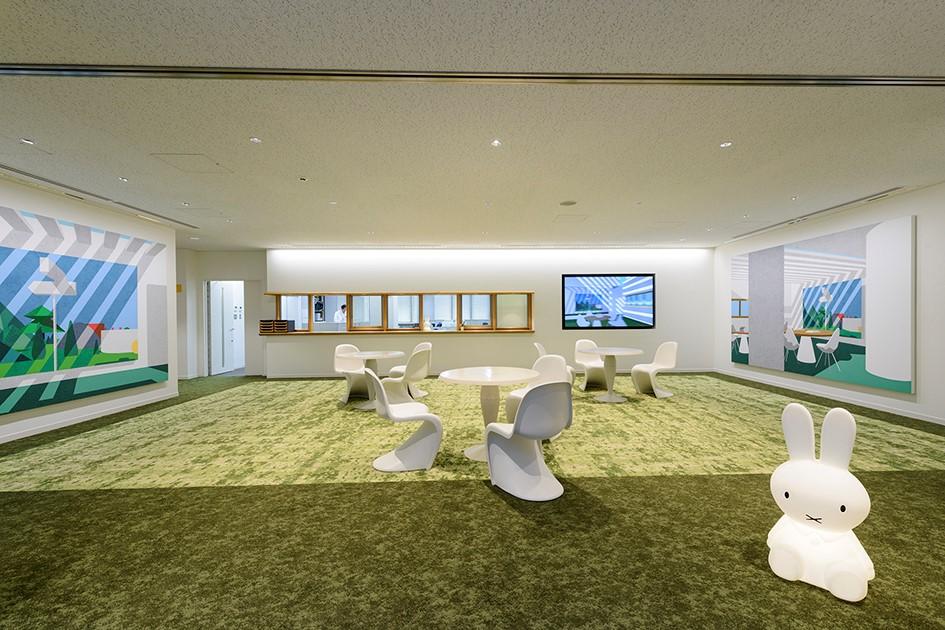 Harada’s unique style is to produce on computer a virtual reality spaces, and then she creates from that world in paint so sometimes a painting is the “nested” of another as above photo. Inspired with geometrical architecture scattered in green campus, Harada naturally introduced them in her own virtual space. What she emphasized most in the real space of paintings were “window”, “shadow” and “columns” or the border between this real space with outside. This functional space as school office is considered by the artist as a big Window connecting this welcome space with outer space of campus. 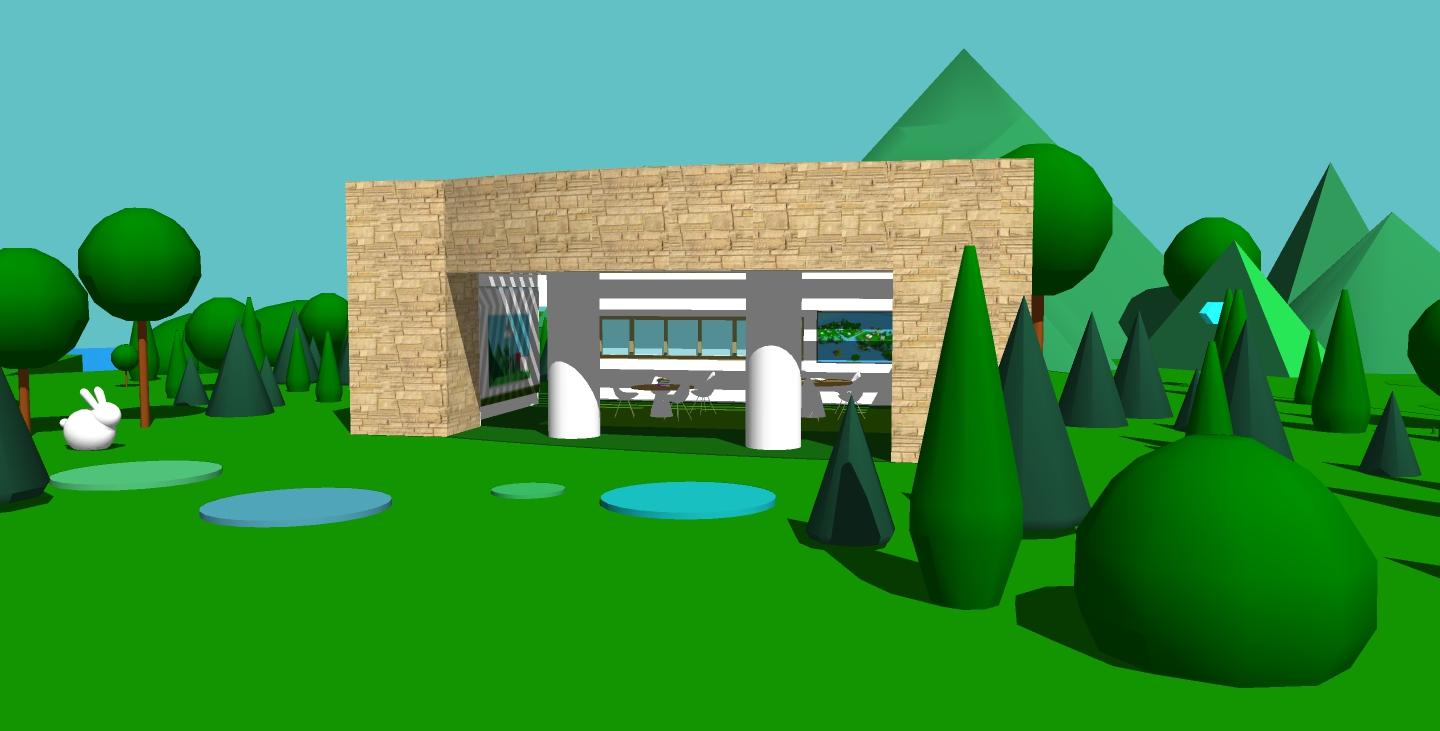 Unique idea for this commissioned work is the space with striped shadows of solar ray through slit roof. If she presented the real shadow checked with painted shadow, in her solo show at Art Front gallery in 2018, this time the solar ray comes from afar generating narrow stripes, thus giving rise to a new school space unlike any houses or galleries. 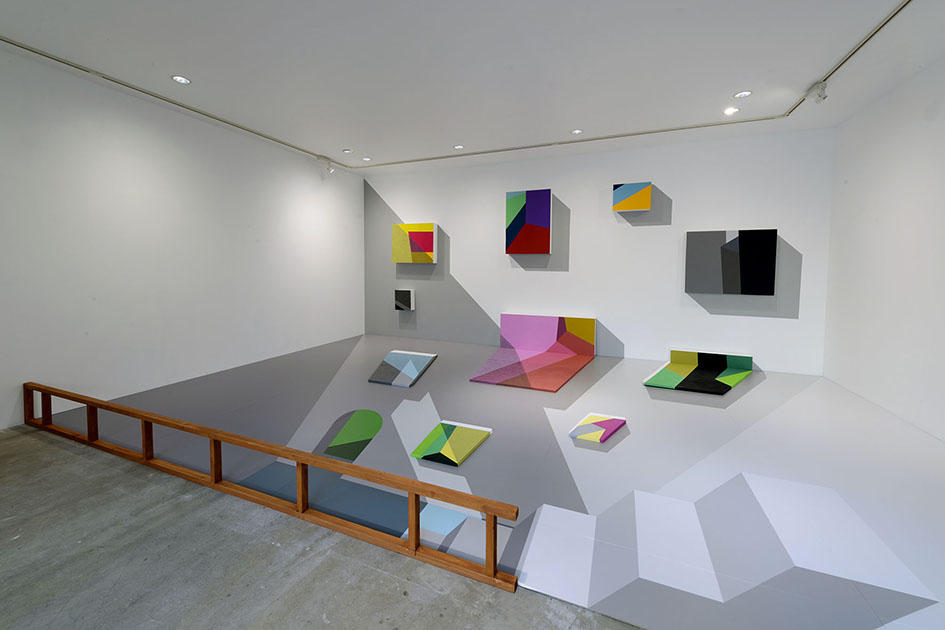 In Senzoku Gakuen version, her virtual world is shoot from bird-eye angle giving charm of multi-layered space. On its right is the two dimensional work depicting a pillar or cylinder column. 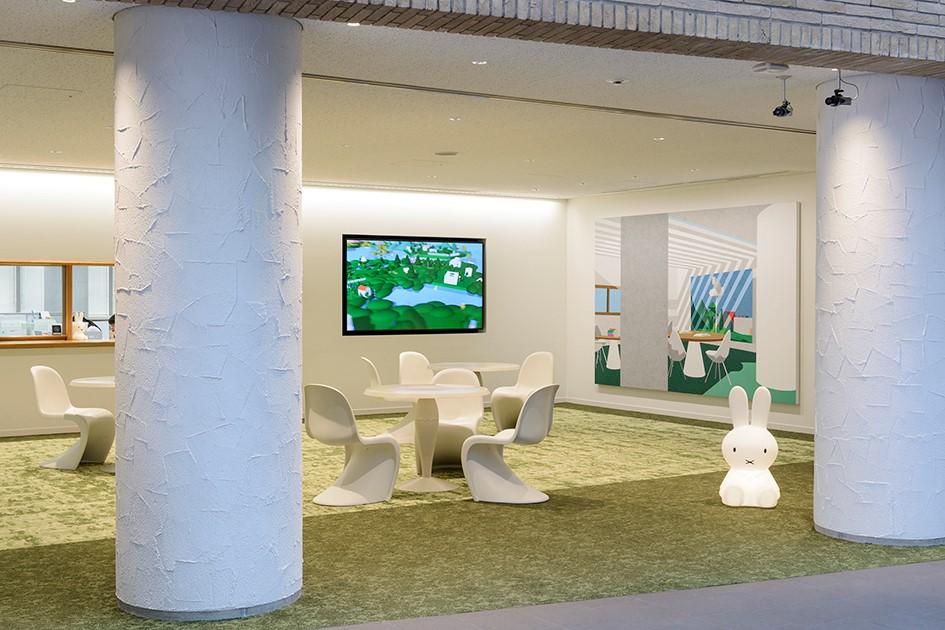 Harada re-place the left painting in her virtual world to paint it again in a nested situation where the real columns are introduced in the new painting on the right. The real columns have been renewed by skillful plasterer for the renovation this time. Harada’s painted pillar themselves resonate this column, with special mixture of paints and sand giving the effect of gradation within the same gray tones. 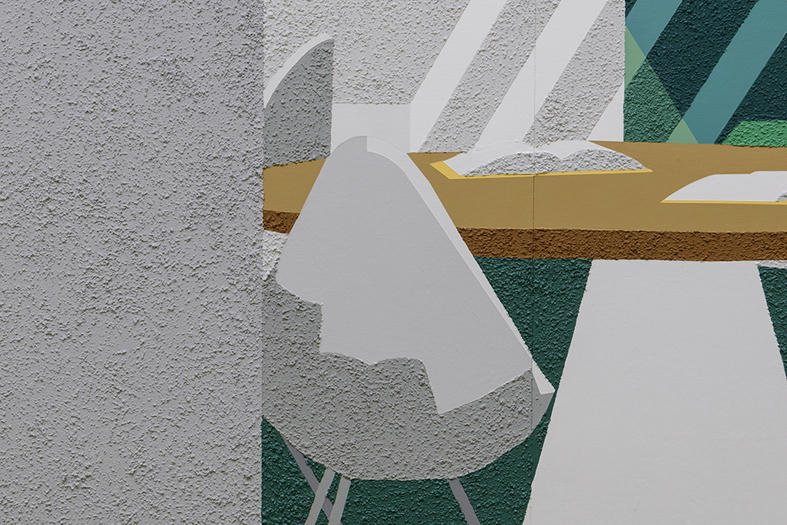 The two paintings and video, installed in the same school space, succeed in constructing a whole spatial artwork. Given such space and occasion, the artist could challenge her own adventure starting from the space. It will watch in future as a big window connecting inside and outside of the campus as well as students and visitors of the space.
(This artwork is not open to public.)