Harada has been creating a fictional world with a house and a park inside a computer, and presents its space in a form of paintings in reality.
Today, more AR (Augmented Reality) or VR (Virtual Reality) becomes available in our life to experience worlds created in a computer, more her efforts are showing a very interesting spread.

Yoro Tenmei Hantenchi is a venue "to rebirth our recognition to bodies" developed by Shusaku Arakawa and Madeline Gins taking 30 years. Various pavilions are dotted on about 1.8ha of ground which has been bored in a mortar shape. Such a firmly calculated space construction throws out visitors' perspective sensation and equilibrium, which provides unexpected "wonder." It is an attempt to invert the human destiny heading to "death" by experiencing the space and releasing sensibilities. Although Yoro Tenmei Hantenchi was completed over 20 years ago, only a part of which was originally conceived was realized and built. Harada expressed unrealized part, images and words of Arakawa Shusaku and Madeline Gins of those days as a member of the research team "Reality Arts." Please keep an eye on the continuing progress of Yoro Tenmei Hanten Augmented Reality project. 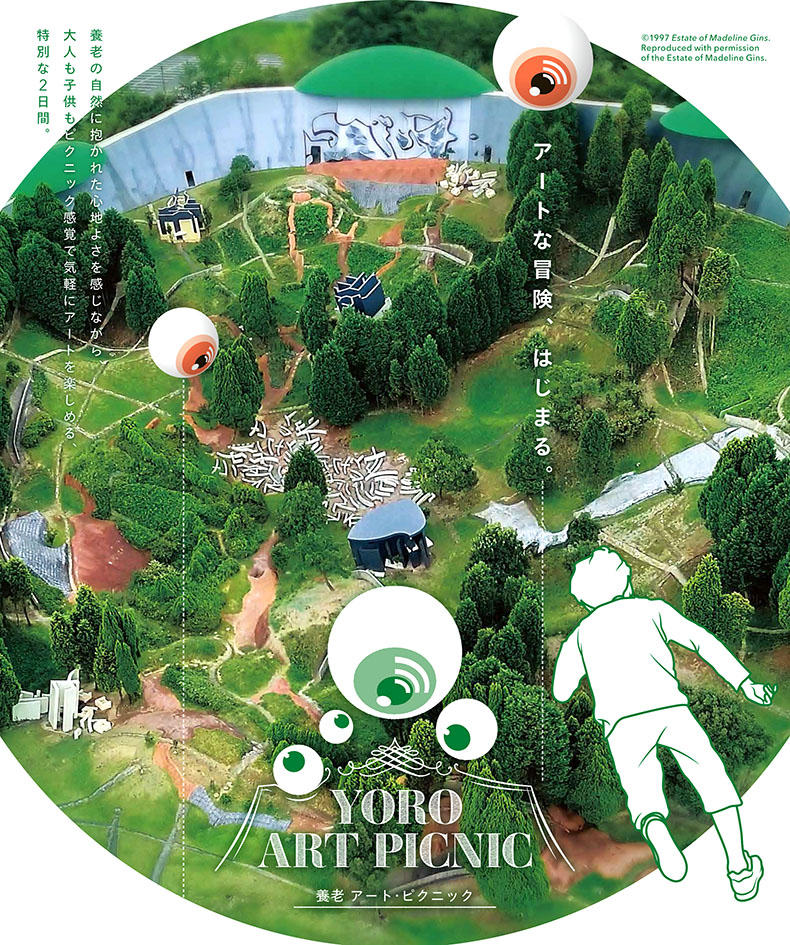 Yoro Tenmei Hanten Augmented Reality is a tool to enjoy a work by Shusaku Arakawa and Madeline Gins titled Yoro Tenmei Hantenchi (Site of Reversible Destiny) (1996) (Fig.1). With the aid of this augmented reality tool, you can view ideas that the artists left unrealised in their drawings or graphics, as well as the realized parts, superimposed onto real space. Users will gain a better understanding of the work, and make fresh discoveries. The software was created to show the artists’ ideas in three dimensional CG layers, named 1) models, 2) signs and 3) plants, all superimposed on the oval- and cone-shaped Yoro Park at 130m×100ｍ. It was launched at Yoro Art Picnic. 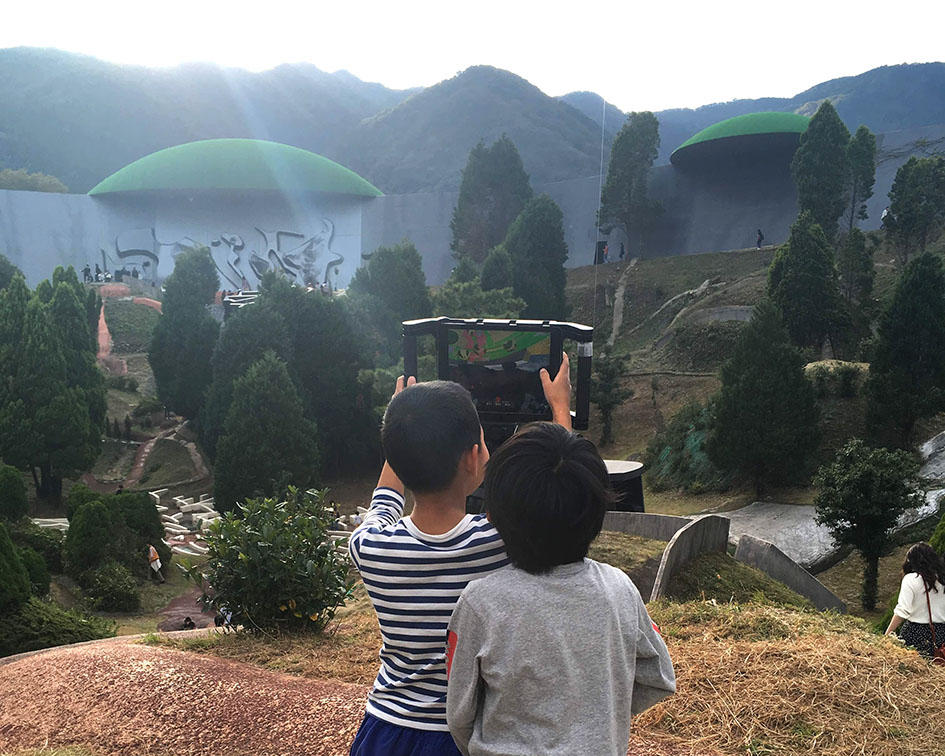 
The AR systems of the application were developed by Masayuki Akamatsu and Tomoki Kobayashi with the 3D models created by Iku Harada. Yasuko Imura and Shigeru Mitsui collaborated to analyse the ideas of Arakawa and Gins. In reinterpreting documents and recreating them in three-dimensional computer graphics (3DCG), Harada played a vital role giving new life to Arakawa and Gins’ ideas.

Harada’s own work creates tableaux of scenes from her 3D CG virtual reality world. In a solo show at Art Front Gallery in 2015, she inverted the relationship between worlds, realising the actual gallery in virtual space. In the solo show NEW DIMENTIONS, held in July this year, she used highly illusionistic single-point perspective to create a new space within the gallery itself. Harada’s work has a materiality similar to painting and the quality of one-off objects. At the same time, surprising about her installation was its interactive aspect, which led viewers to search out viewpoints from which to appreciate the work fully. Single-point perspective is very effective with photographs. I myself came to understand the charm of Harada’s work thanks to visual devices of space-recognition experience, obtainable only in actual space, as well as the diffused camera images (Fig.2). 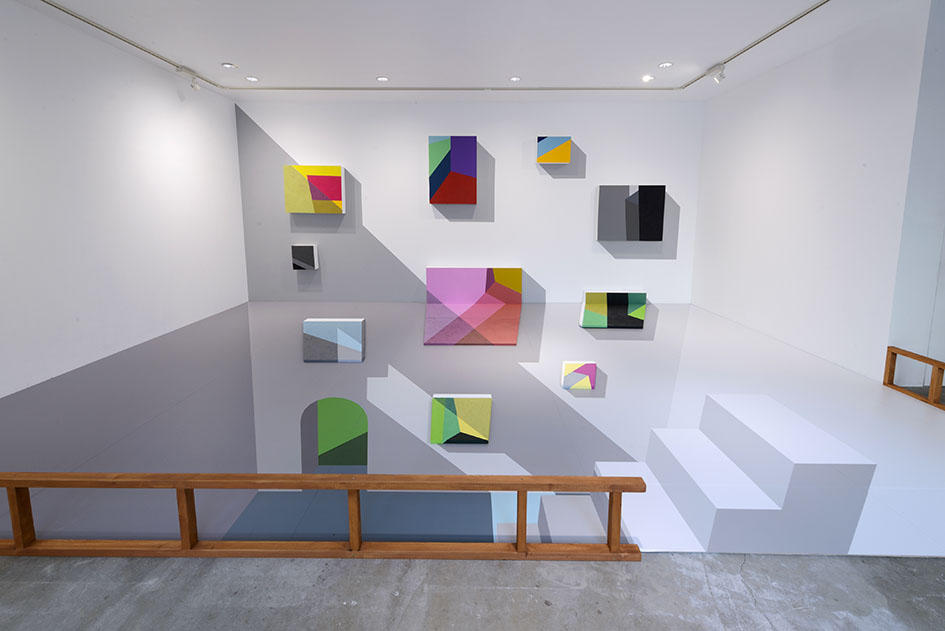 
On the other hand, the worldview of Arakawa and Gins at Yoro park depends on how users interact, as they become inspired by the names of pavilions and paths, as well as undergoing their own physical sensations. That is why the present project shows 1) ‘models’ as motifs of inversion, 2) ‘signs’ indicating the names of pavilions and 3) ‘planting’ for the ever-changing garden. All elements are symbolic and communicate concepts behind the work, with different expressions in 3D modelling, text and animation. 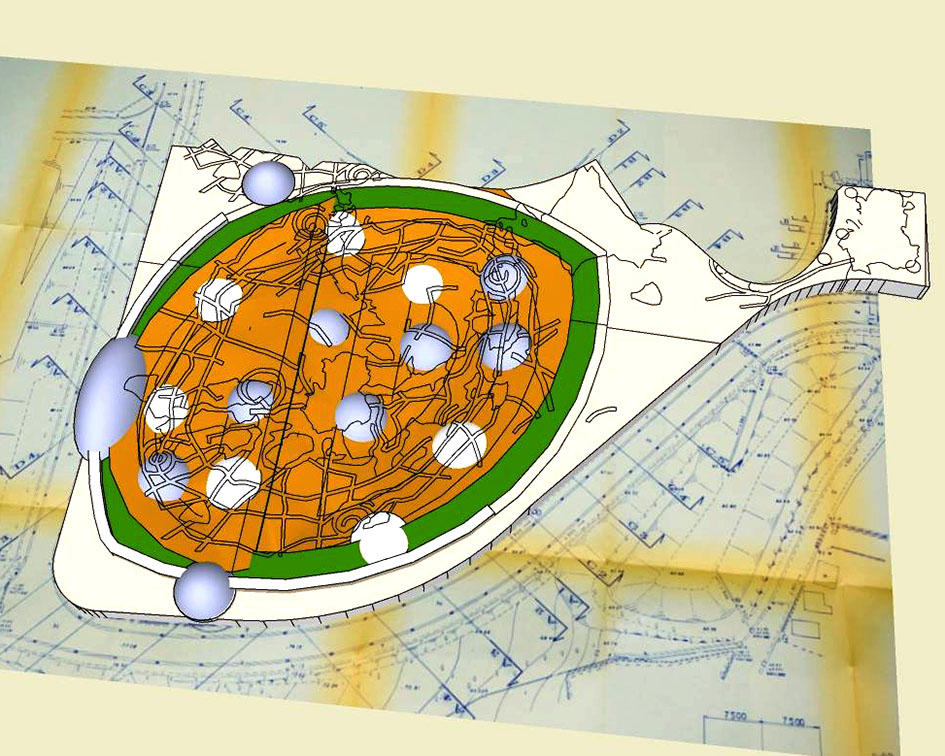 
1)Modelling: Motifs of Inversion
3D models were created from photographs and drawings of completed projects (Fig.3), with a 3D model of vertically-inverted Yoro Park shown above the actual space (Fig.4). Arakawa and Gins’ idea of inversion first appeared in their The Process in Question/Bridge of Reversible Destiny (1973-89) which was the model of an uncompleted bridge project in Épinal, France. That consisted of a vertically and horizontally invertible space which was cut and closed, and on which perceptions were projected. Referring to the artists’ past projects, we were able to reveal our vertically-inverted model, not possible in reality. Viewers can move the model vertically by dragging the image across the display. 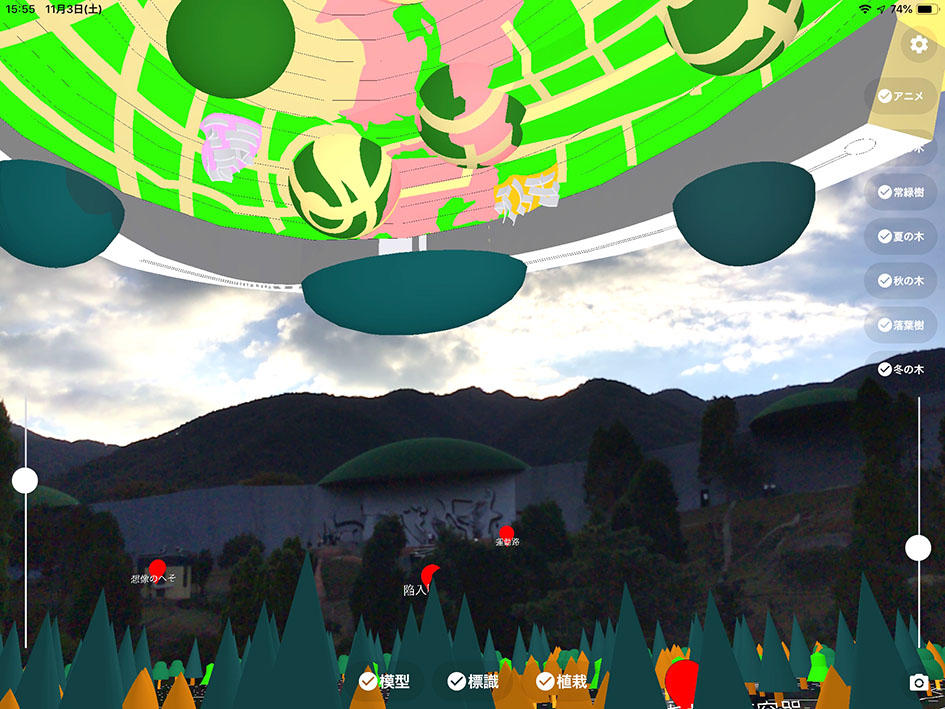 2)Signs: Names of Pavilions
Yoro Park has 143 paths and 9 pavilions across 10 zones, each with a specific name. This application shows the names of the pavilions (Fig.5). Some pavilions are infused with concepts appearing in other work by the artists, such as ‘Cleaving Hall’ and ‘Destiny House/Landing Site Depot’. With texts for clues, viewers are invited into a world outside the world of perception. 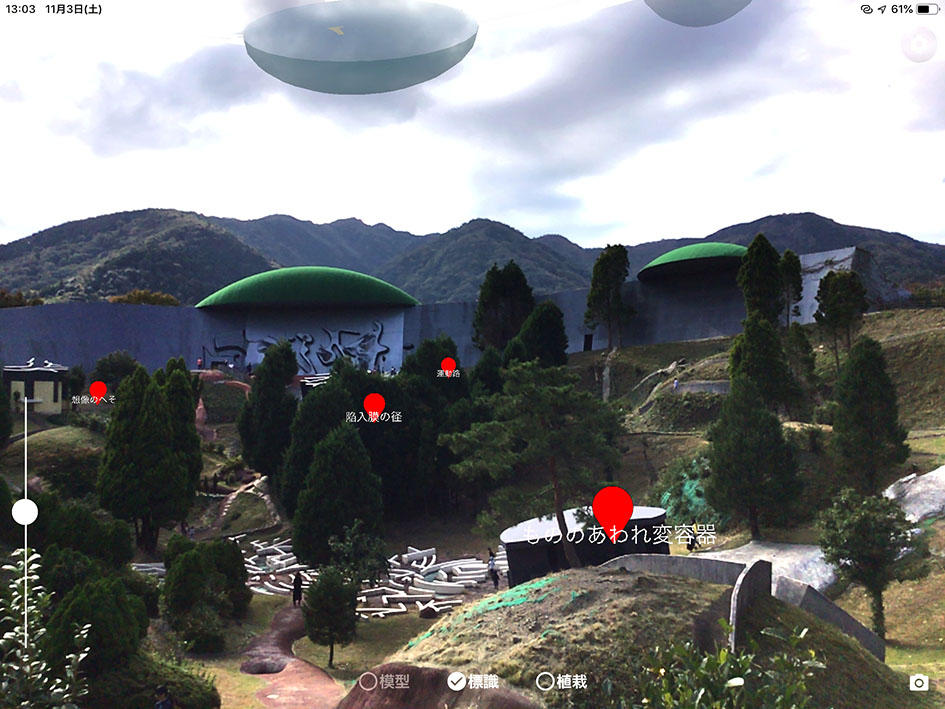 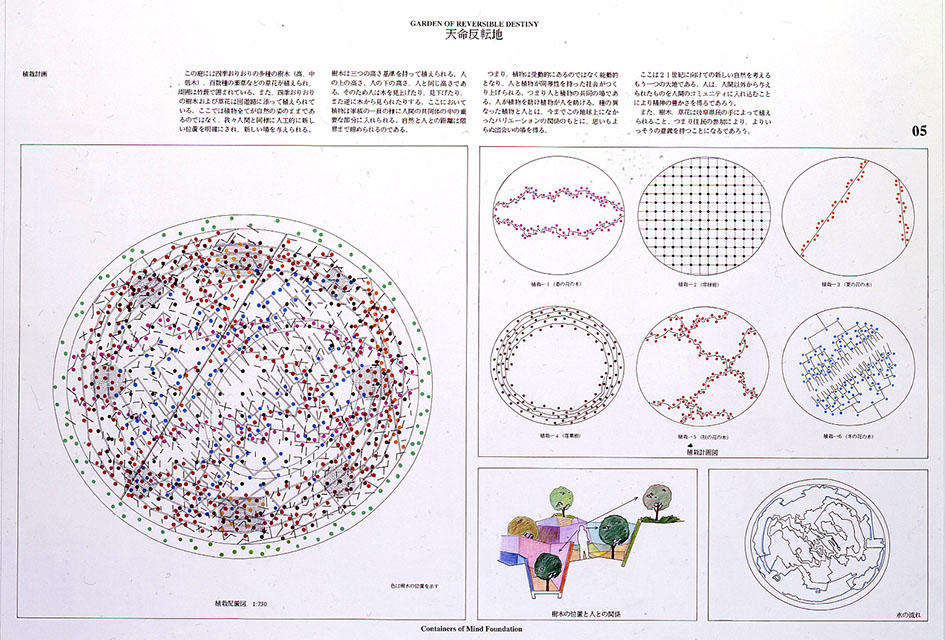 3)Planting: Image of An Ever-changing Garden
3D models were created in 6 layers based on planned planting in CG for Tenmei Hantenchi (1992)(Fig.6). The layers are: spring-flowering trees, evergreens, summer-flowering trees, deciduous trees, autumn-flowering trees, and winter-flowering trees. Animations functioning in display mode slowly show the year’s seasonal transitions, as well as having a separate indication mode. 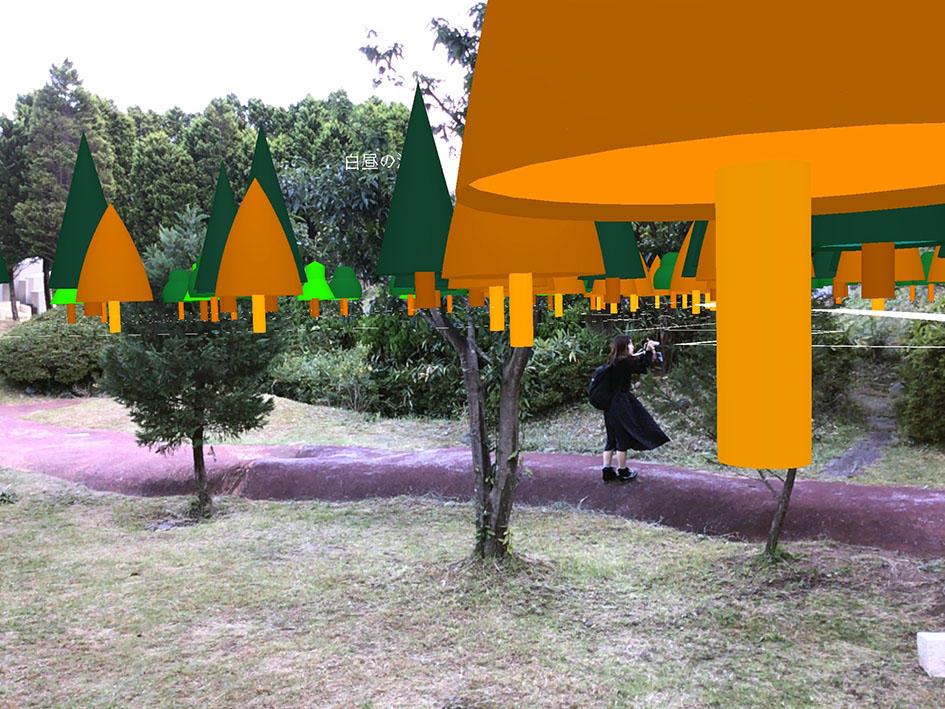 Trees are programmed with different heights depending on the incline, so that relations between people and plants change according to viewpoint. Although the actual planting arrangement at the Park is different from the programme, viewers can see plants in different vertical views, so as to suggest changing relationships between themselves and the growing forms.(Fig.7) 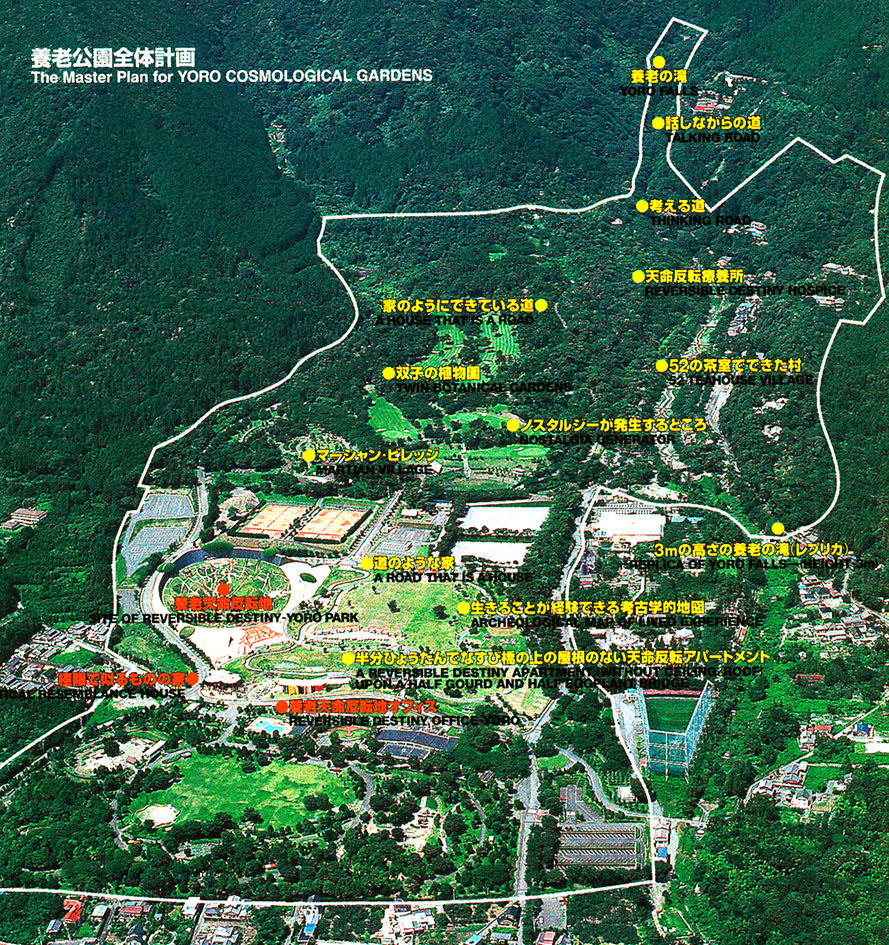 In the more than twenty years since Yoro Park was completed, it has become natural for us to give equal weight to reality and information. The greatest change over that period has been in the media environment that surrounds us. Yoro Art Picnic allowed viewers to photograph synthesised scenes visited on-site and upload them to Twitter (@reality_arts).
We discovered that before Arakawa and Gins realised Yoro Park (1996), they recorded ideas for ‘a total planning of Yoro Park’. These reveal 16 pavilions were intended, though only three were realised.(Fig.8) The original plans offer a glimpse of their spectacular concept for a changing everyday consciousness made by letting people wander through multiple pavilions with evocative names. We aim to go forward with constructing all those unrealised pavilions using AR.