Tadashi Kawamata works column : Early works in the US

Besides on new works of Tadashi Kawamata, let's focus on the early works we are exhibiting and selling just right now, especially which was made in USA...

Among early works exhibited in the gallery, some have been created for the sites in the United States. Kawamata was a resident artist in P.S.1's International Studio Program in 1984-85, and many encounters with the people there led him to significant projects in New York in the following years.
The art director of the Limelight disco visited Kawamata's studio at P.S.1, and reviewing some photos of Tetra Houses the artist had already realized in Japan, proposed a commission work on the Limelight Church. Kawamata then conceived of covering the façade of the old church, which was a challenge since the renovated building itself was already landmark of the city of New York, and the permission of the city for the production in-situ was not given until the last minute. The project was exhibited in 1985 for a month before its demolition.

The maquette for this project are not left many, and the Limelight Project Plan (13) is such example witnessing the process of several meetings the artist had with the related people of the architecture. The construction of the timbers were installed fairly high in position of the facets of the church, which are represented on the maquette in white paint.
As the artist recalls the gap between the quiet silhouette of the Limelight in the day time and that in the night disco youngsters gathered for, and the excitement or hot air of the eighties in Manhattan comes through the piece. 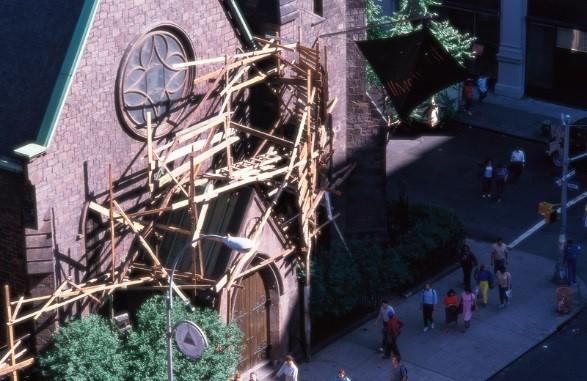 
Another project which started at P.S.1 was by its curator Claudia Gould. From early years Claudia found talent of Kawamata and nominated him one of the artists who would produce site-specific work in Roosevelt Island with its abandoned historical site of Small Pox Hospital. Kawamata explains the project as follows.

“At the time of those projects I was interested in archaeology, and approached them with the idea of excavating the historical background of the sites where they were carried out, or in another sense activating their existing characteristics to transform these sites into something entirely different. Roosevelt Island was home to an isolation ward for Small Pox, and the island itself has its own historical significance. In a way these relations could only be revealed to a broader public through art. Indeed, what was interesting to see was how the project changed locals' perceptions of the site.”(cited from art-it interview in 2011) 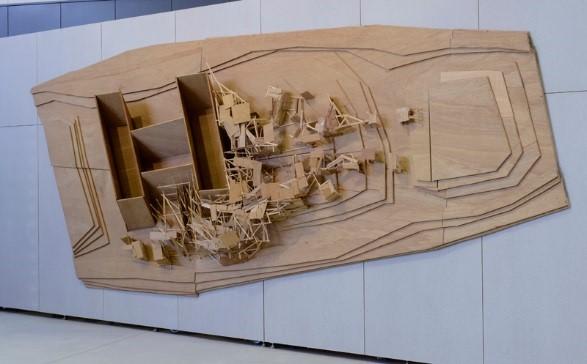 
The maquette of six meters wide gives us the whole sense of intervention into this historical site with materials of scrap limbers collected from construction site in New York. Undulating shape composed of the parts may have been leading to that of the current Starting over, Under Construction. 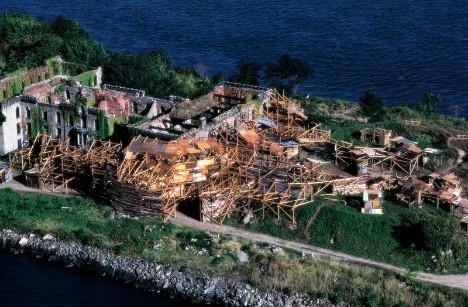