Bunpei Kado explains the work at his current exhibition at Art Front Gallery. 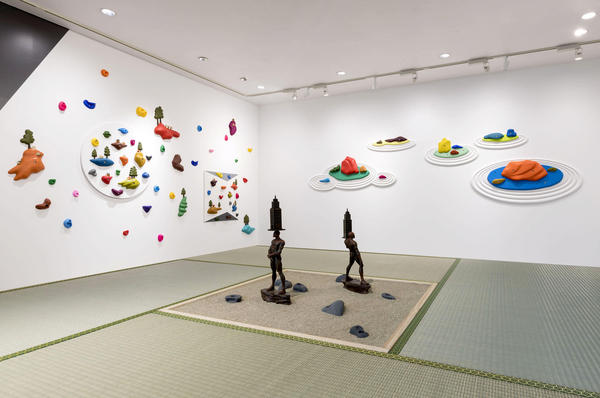 The installation view of solo show : The garden at Art Front Gallery, 2021

I was conceiving the whole room as a garden or temple, so I also added a round window of Zen temple in the material of cutting sheet. From the street, you can view a tatami-matted room against which you see garden.

I had long been interested in its image as a whole where studs on the wall invites people to climb up them, an action against gravity managing to scale up without sense of gravity. The occasion for visualizing such interest came to me a couple of years ago at the exhibition in Fukui Fine Arts Museum located in my hometown. The exhibition theme was a collaboration between the collection of the museum and the artwork of contemporary artist, to ask the latter to generate a new work inspired with a museum piece on artist’s choice.

The line of this prefectural museum is fairly classic, out of which I chose a screen painting, a collage-like-piece composed of many different Japanese paintings. Several landscape paintings have been pasted onto the screen, each representing waterfall along rocks in form of so-called screen painting. This image was, for me, associated with a screen of today if these rocks could be transformed into the holds of bouldering. So, I made up a screen painting in “bouldering style”, modifying the composition of the existent screen. 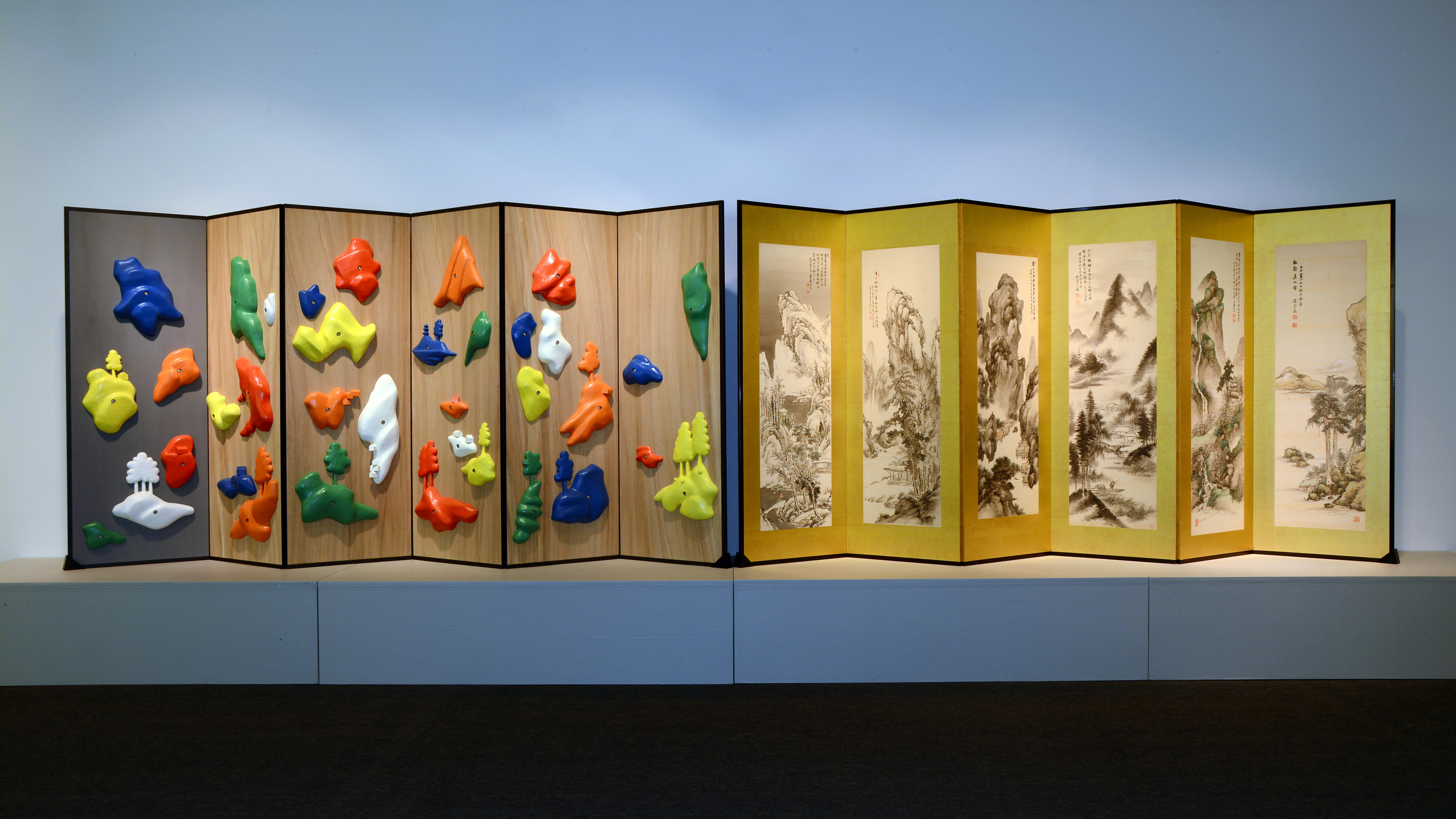 Create a wall-garden in habitation space

I participated in an art competition organized by an interior company “Sanwa company” to exhibit in its show room, Tokyo. Given space was the booth-like space made of wall and floor．I myself is a sculptor, so usually I install my three-dimensional work on the floor, while I am always interested in exploring the possibility of developing my work on the wall and not on the floor, thus enabling the installation of three-dimensional objects in the living space. To create something on the wall, the idea of “garden” came up, a desire to have a garden in the midst of large city, either in a collective habitation or in a single form, making “a garden inside a room”. This is how the garden on the center wall was generated. 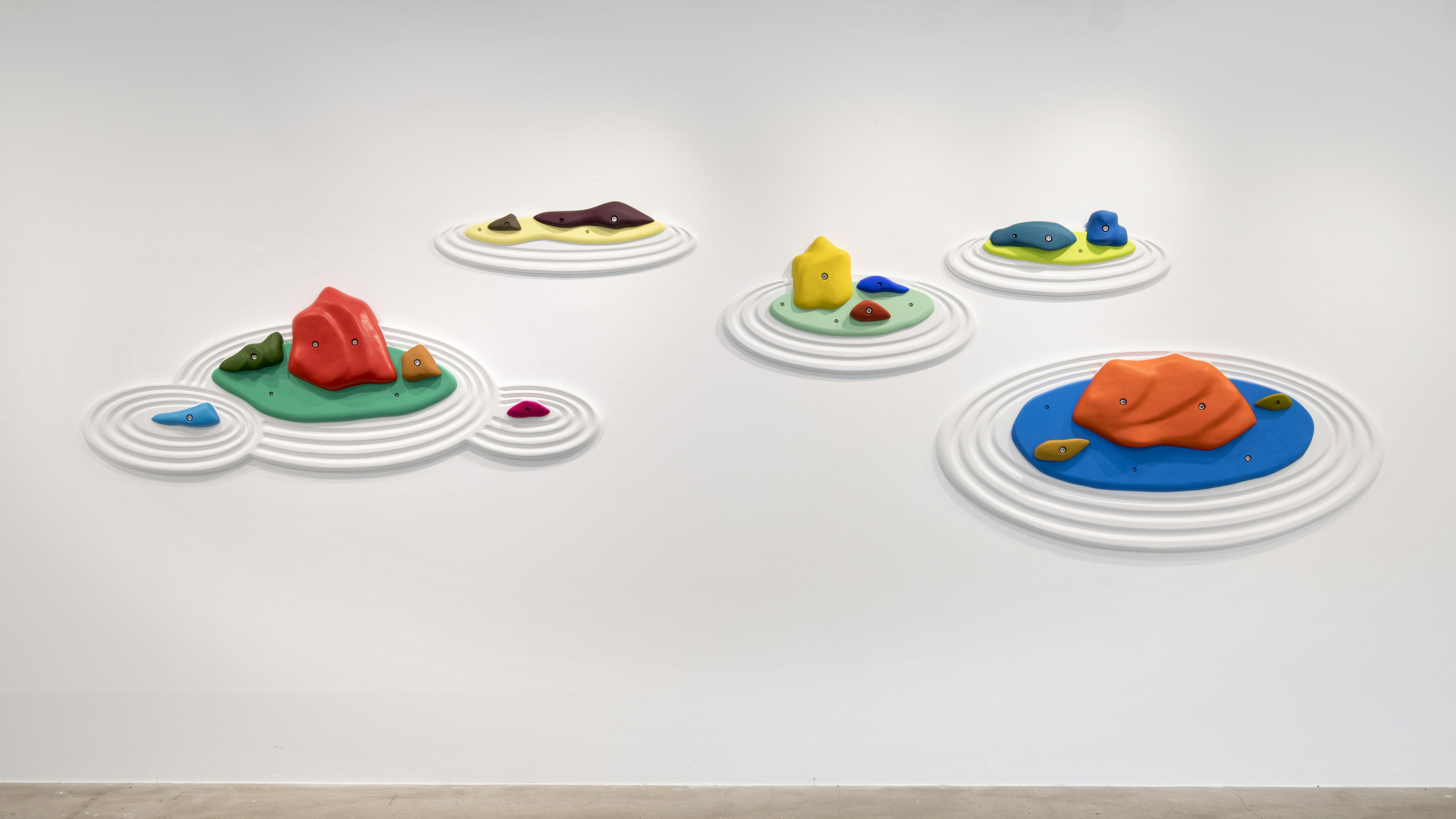 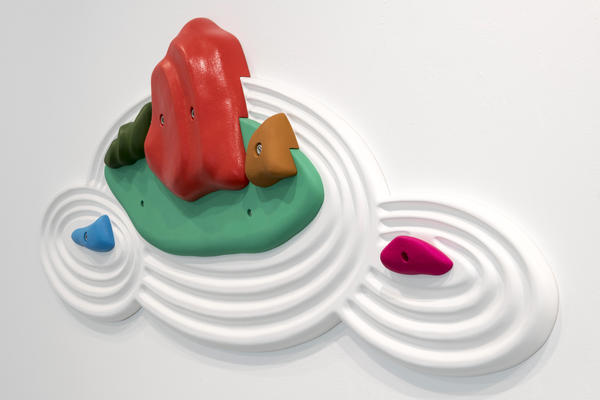 Passing through these initial stages, I created these new series of “Floating Island” on that wall. The pieces in the form of circle, triangle and square are salable in each piece so separable from the wall, around which the real holds and artistic holds are scattered around the space, thus making the whole composition as a floating island. 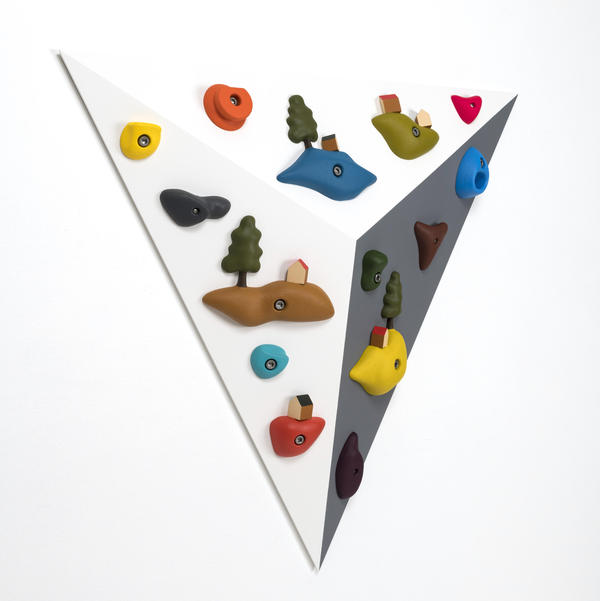 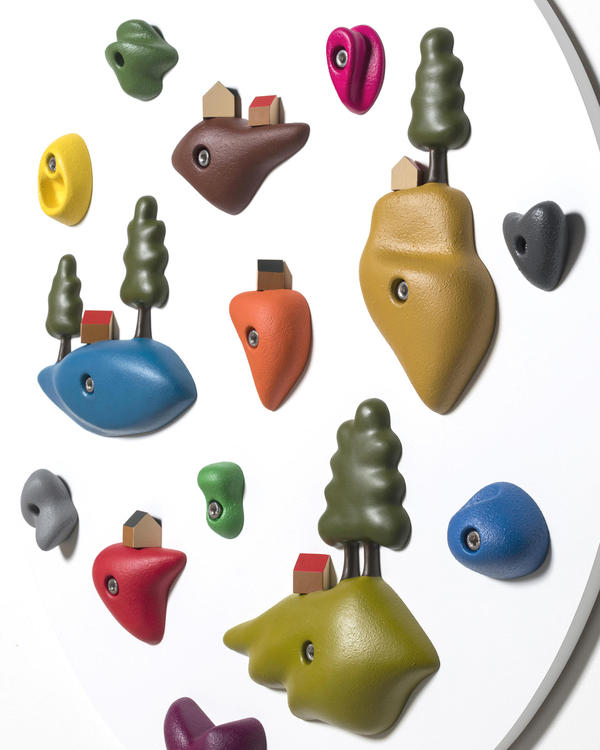 I have long been working with the motifs of houses, trees or habitation which does not stand on the ground but on the wall in dangerous position of special housing environment of human beings. In this case of bouldering, too, the small hutch with nest for swallows is the scale which I aim to produce.

This composition has also a proto-type in Kenninji Temple in Kyoto with “the garden of circle, triangle and square” where the water well, moss and tree in the center, veranda-like structure which is normally straight but oblique in this case. In the creating process I was conscious of such composition of an existent model. 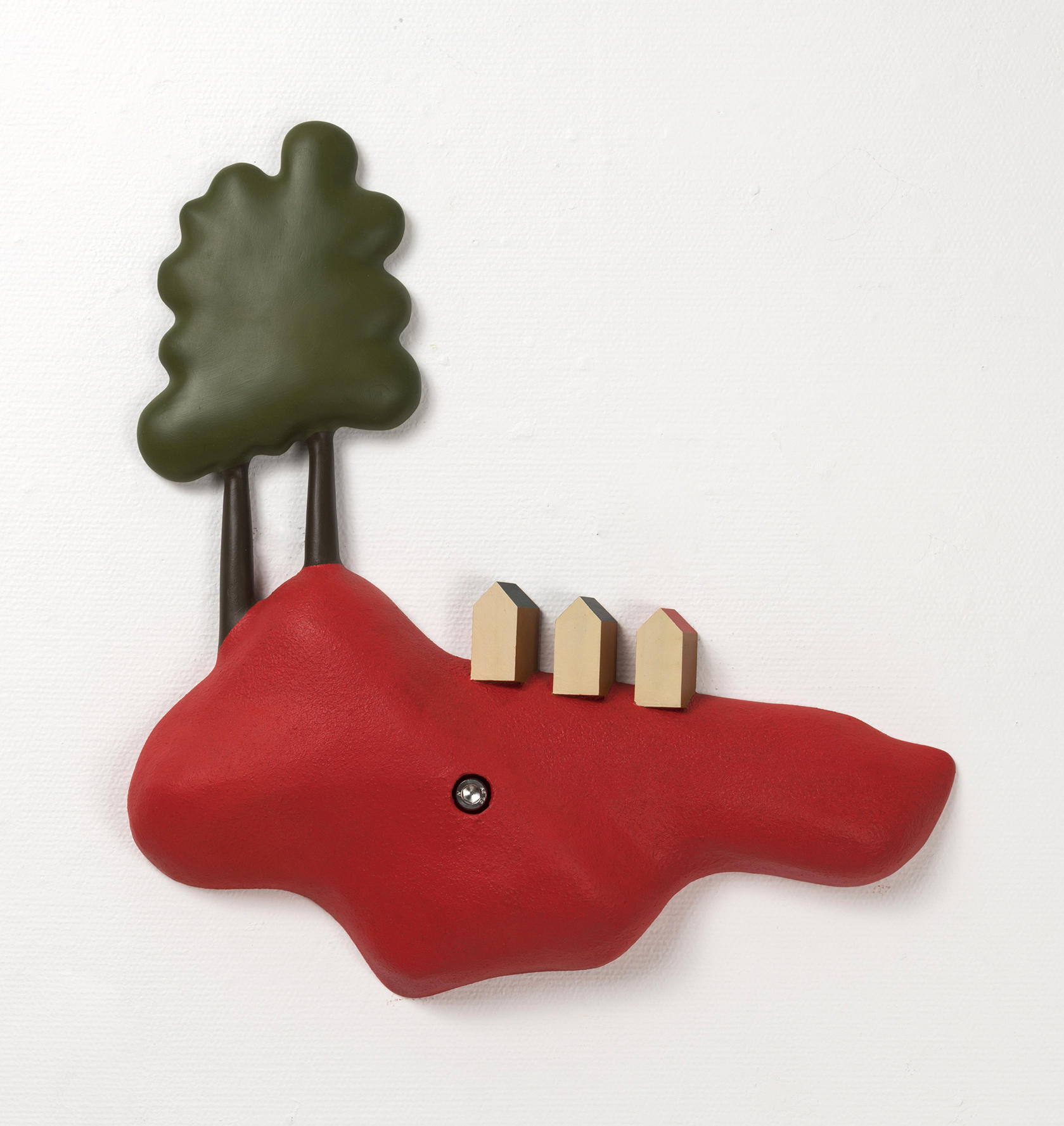 Connected with the contemporary version of hanging scroll 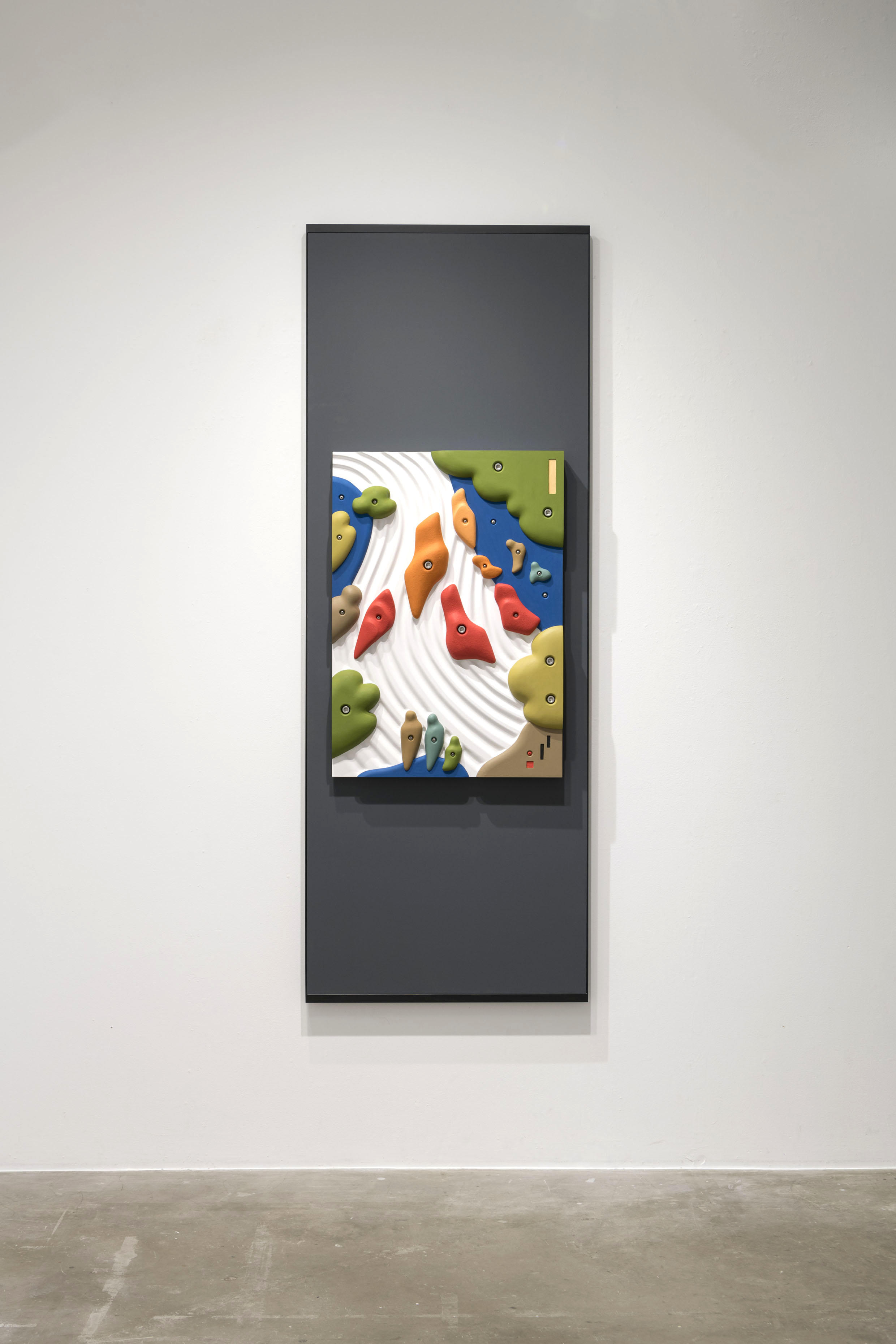 This piece is in the image of hanging scroll. Motif is the Waterfall of the Mount Kurokami in Shimotsuke region by Hokusai. This wood block print is one of the series of “Journey around the known waterfall throughout Japan. The composition has been slightly changed into in my way but basically associated to this composition, with waterfall and rocks in the rhythmical series where splash water vaporizes in the air. The idea of Hokusai is closely connected with mine, so I took it as my own motif altering into the form of a hanging scroll. In general, Ukiyoe or Japanese wood-block prints are in vivid color, but a little bit in restrained tone, so small change has occurred in use of color. This part of title or other seal or sign are also deformed or re-designed in my new version. 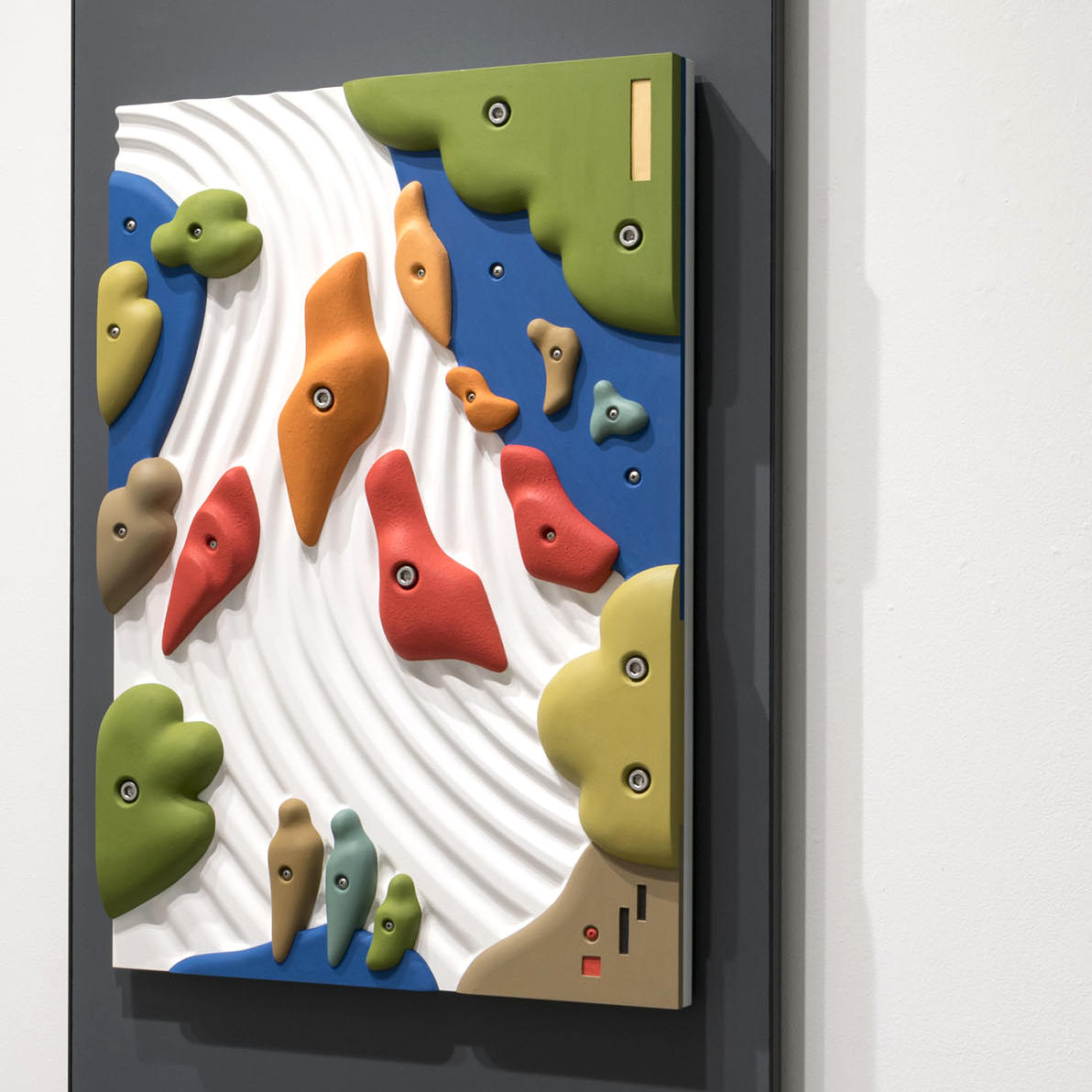 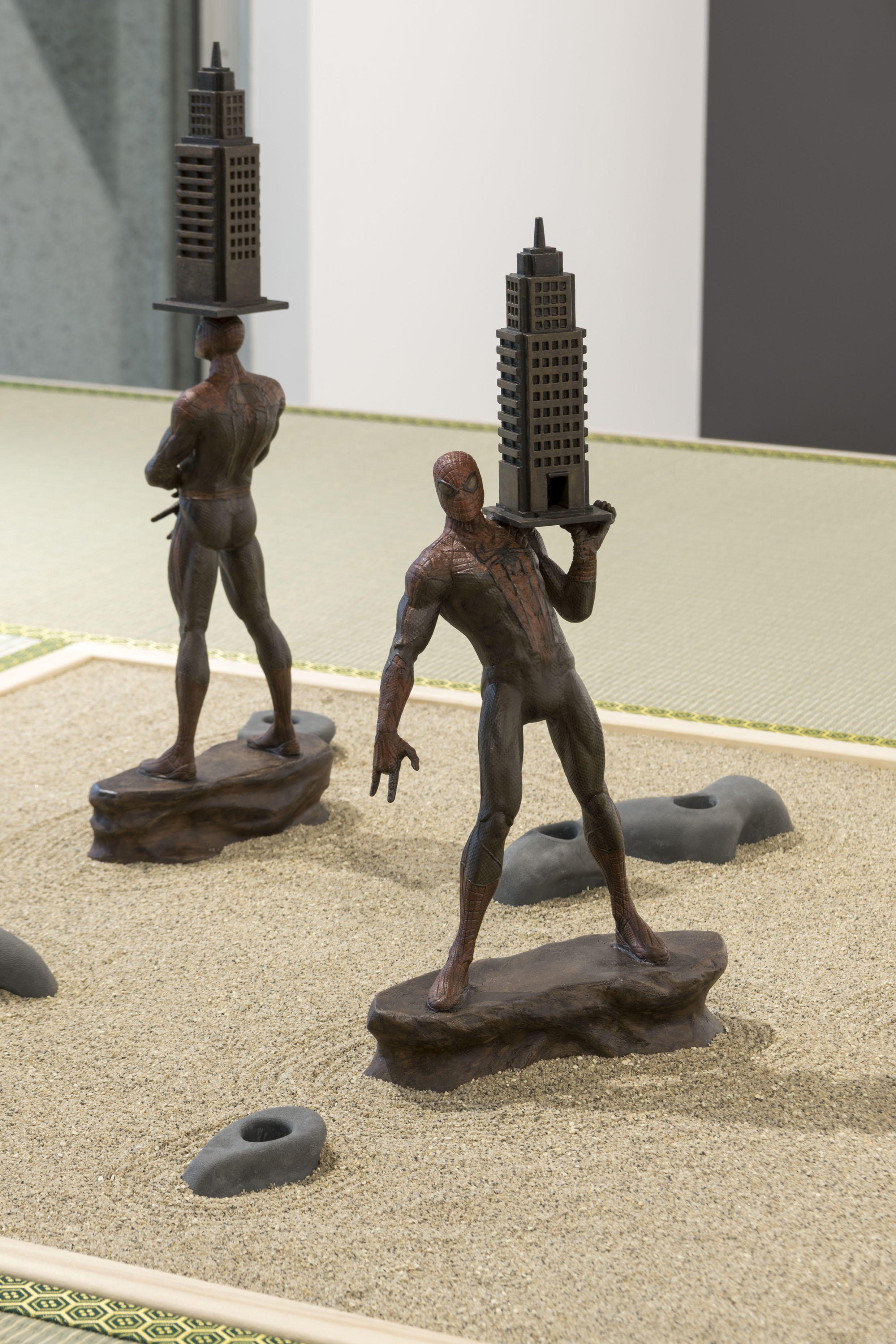 I was searching for something three-dimensional in the center of limited space of four-and-a-half tatami and picked up the motif of Tentoki and Ryutoki , a national treasure said to be created by the third son of famous Unkei, the Buddhist sculptor for the Kofukuji Temple in Nara. If the one sculpture is holding the lantern on the head while the other on his shoulder, and it seems to me that both pieces are fairly avant-gardist for that time of thirteenth century. The main theme of climbing will lead an idea of spiderman, a symbol of hero keeping the both elements of good and evil, climbing illegally but rescuing people, just like the devils holding the both sides of the world. That is why I replace the lantern with the maquette of a building, surrounded by the bouldering holds floating on the dry garden. 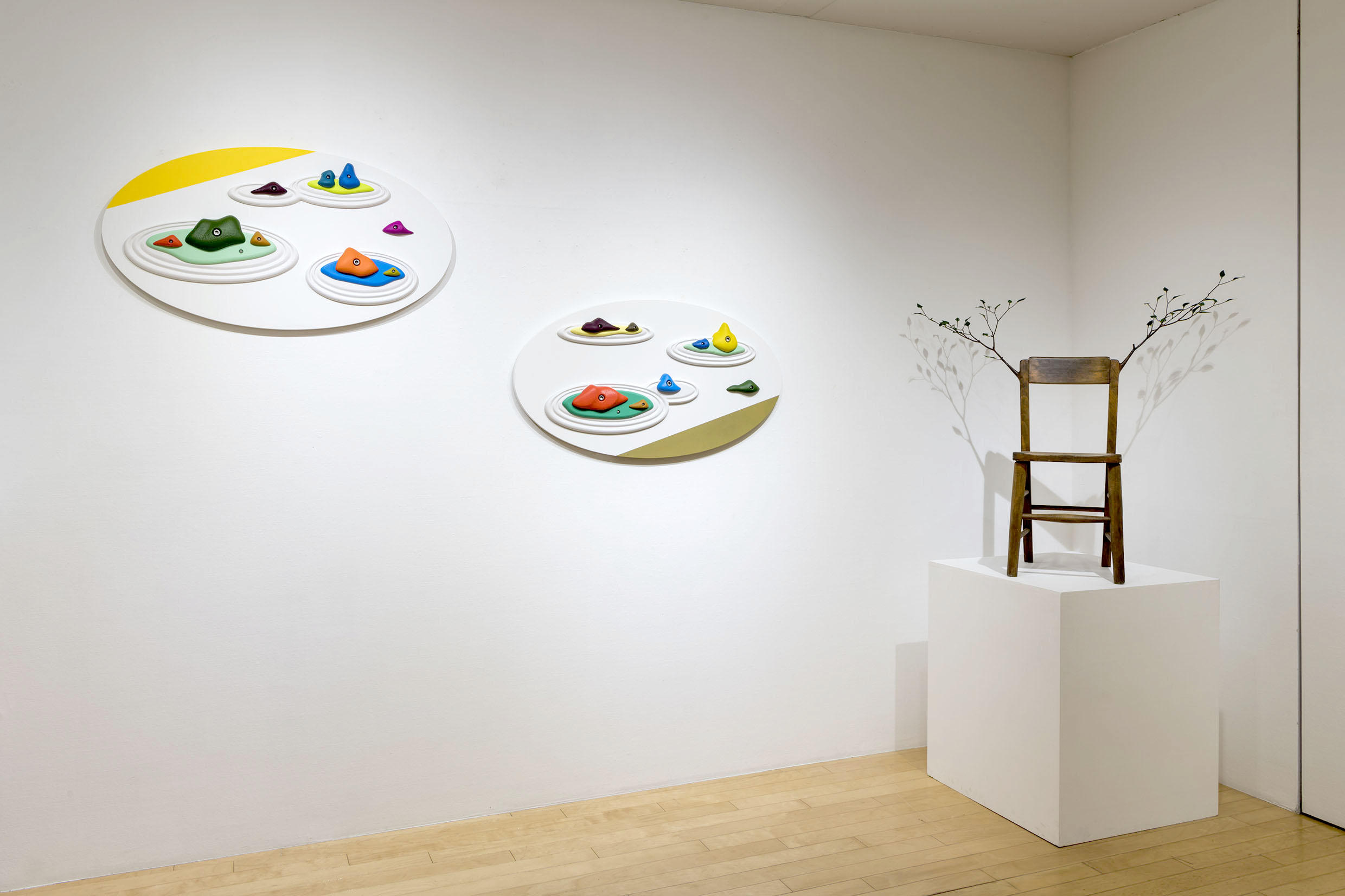 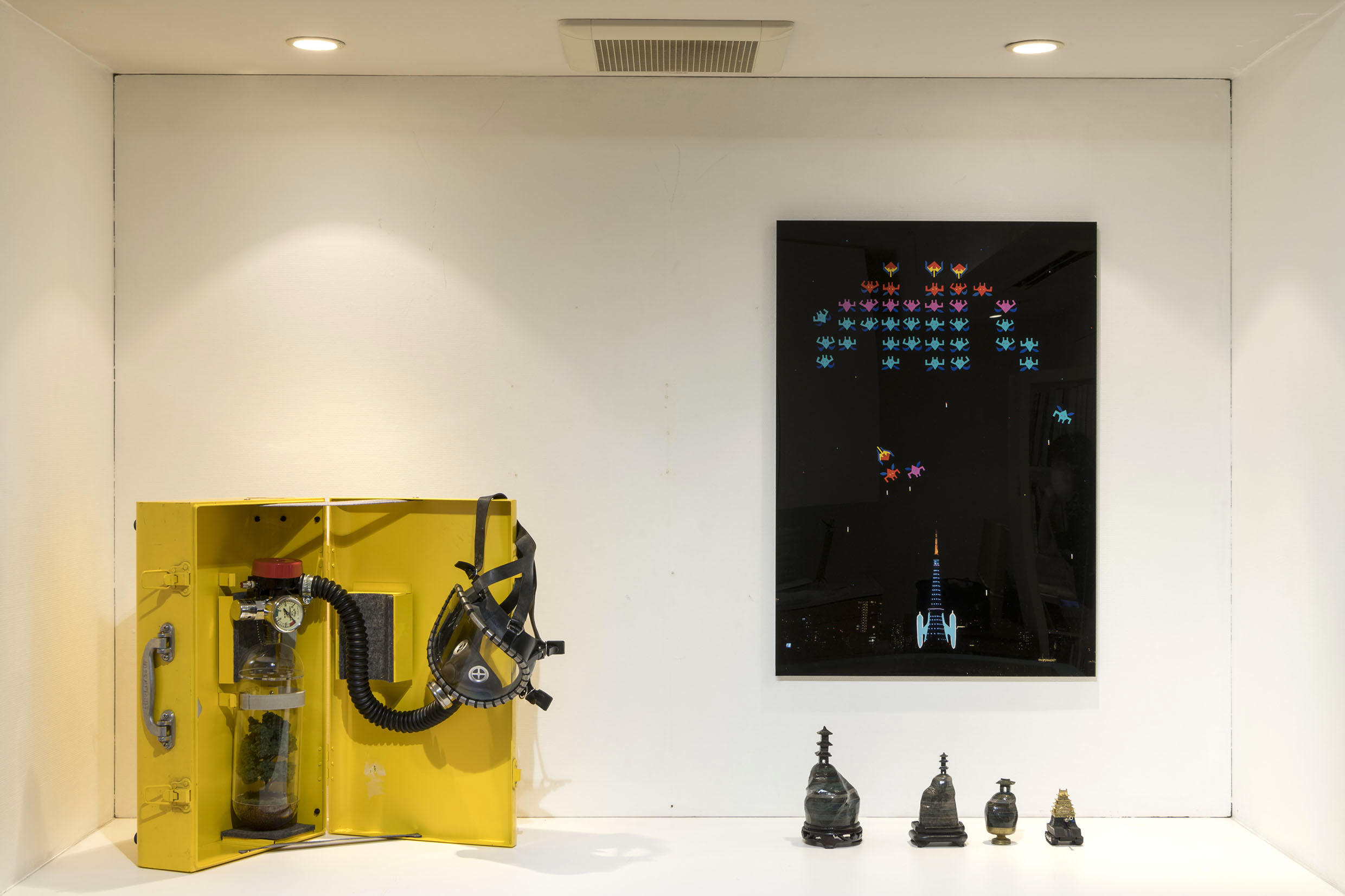 In the third room, exhibited are the small Rock gardens or the availble works og the aritst. We appreciate your kind visit.