The current "Collections of Echigo-Tsumari Art Triennale 2022" features the best selection of works by artists who have participated in the Echigo-Tsumari Art Triennale. The first exhibition was held in 2000, when Echigo-Tsumari Art Triennale actively invited artists from abroad. Ilya and Emilia Kabakov's "Rice Paddies," which symbolizes the energy of the Echigo-Tsumari Art Triennial, is a work that is literally rooted in the earth and continues to connect visitors to the land of Tsumari. The work exhibited in this collection "Ship of Tolerance", aims to create a world without conflict by encouraging interaction among people through art. The background of its creation and the artist's thoughts will be presented. Another work by Oscar Oiwa, who also participated in the first exhibition, "The Beautiful Thatched House," is also based on the motif of life in Tsumari and is a vivid green landscape painting captured from an outside perspective. It will be introduced along with Oscar's recent activities in Setouchi Triennale.

Ilya & Emilia Kabakov embarked on the "Ship of Tolerance" project in 2005. They were invited to the Siwa Oasis, located in the Libyan Desert in western Egypt. Kabakov was fascinated by the beauty and mystery of the lake, and when he learned that none of the local children had ever seen a boat, he thought to himself, "Yes, let's build a boat with the children! " They asked the children to draw "ships they had never seen before," and combined the drawings to form sails.
Indeed, we can see a boatman who looks like an Egyptian rowing a boat with a slightly eccentric sail in one of the works, and we can feel the warmth of Kabakov's eyes that accepts the children's drawings just as they are. 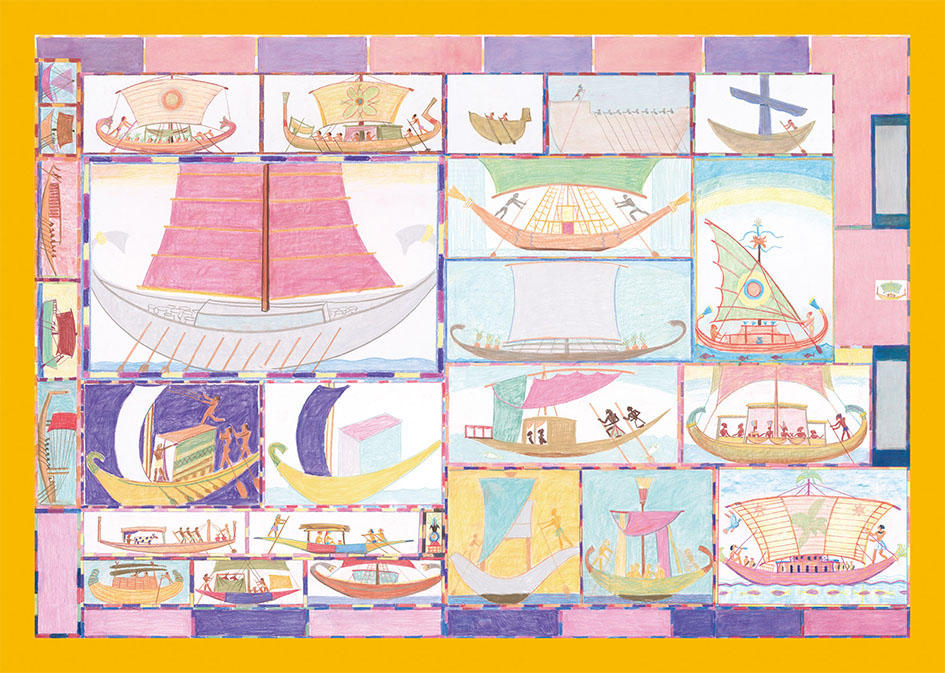 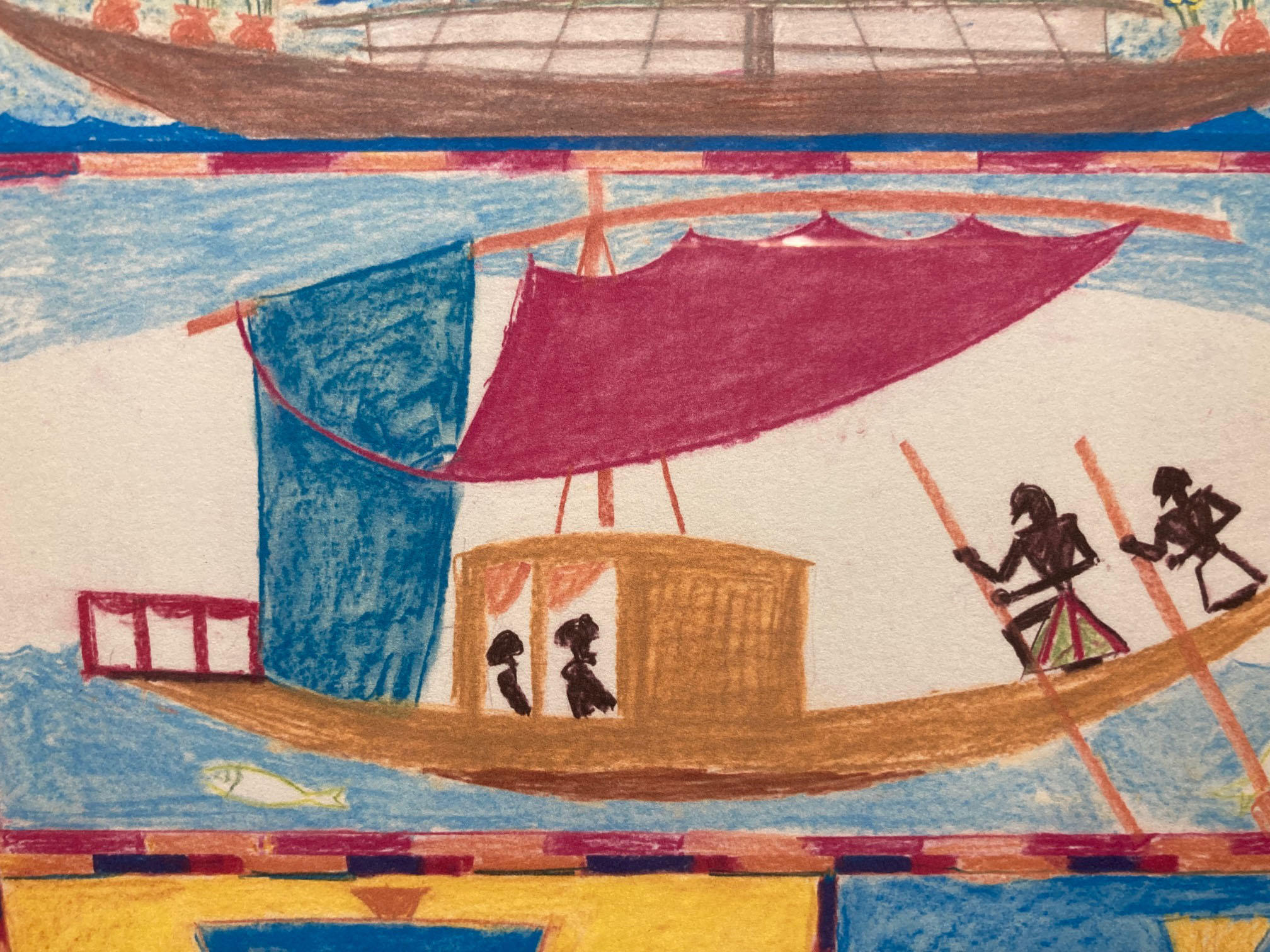 ”The Ship of Tolerance” (detail)
For the boat itself, we asked David Harold, a lecturer at the Manchester University of Art and Design, with whom we had worked for some time. He took his students to an oasis in his native Egypt to build the boat using local bamboo and reeds. The process took three to four weeks, during which time hundreds of visitors came daily to see the construction and learn about the project. The beautifully lit ship was then launched with the blessing of children, supporters, friends, community leaders, and the general public.
Since then, through several sponsor changes and more, their ship has been rebuilt and sailed through Venice, St. Moritz, Miami, Havana, Moscow, London, Chicago, etc. In London in 2019, it was moored at the Millennium Bridge near the Tate Modern, and at the Chicago Architecture Biennial the same year. The ship appeared at the Navy Pier and attracted a lot of attention. 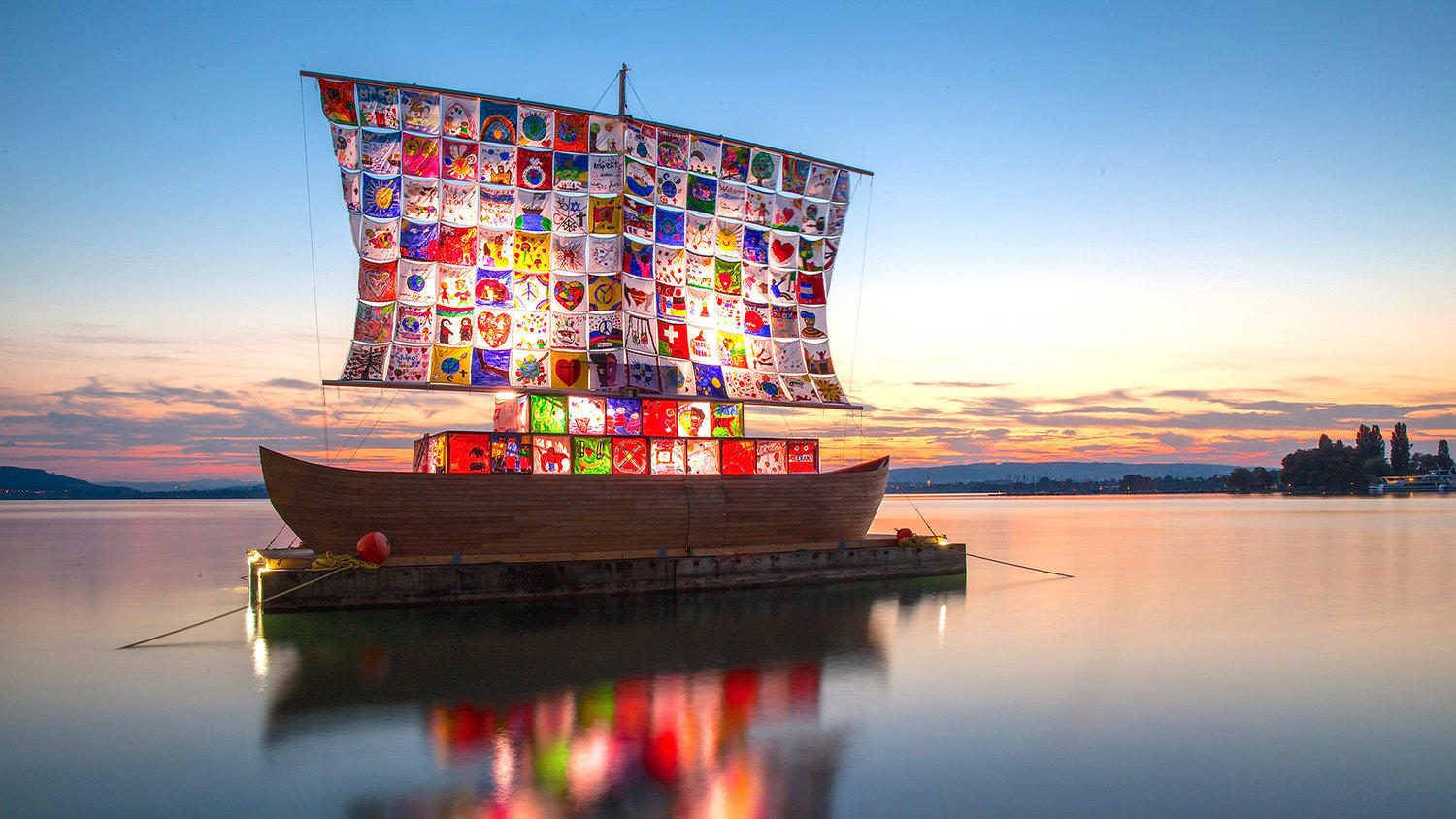 Ship of Tolerance ©photo by Daniel-Hegglin, courtesy of Ilya and Emilia Kabakov Foundation

The "ship of tolerance" project is not only for children, but also for many other collaborators. Literally translated, this means "ship of tolerance," but what is the meaning behind it?
As you know, Ilya Kabakov was born in Dnipro, Ukraine, to Jewish parents who evacuated to Samarkand, Uzbekistan, during World War II to escape persecution by the Nazis. Recalling his own childhood, he said, "By participating in the creation of this boat, children learn to respect different cultures and ways of thinking and to understand how they are different from themselves. In short, through this creative process, children demonstrate tolerance and learn vivid lessons." The artist says. Tolerance," which transcends racial and ideological differences and embraces diverse ways of being, is the message that Kabakov consistently conveys to us. In Siwa, Egypt, where Emilia Kabakov visited before building this boat, she witnessed the following scene. When Emilia saw children fighting over a small gift, she remembered an old saying in the Caucasus: "If a woman comes between two men who are fighting, the fighting will soon stop.
Even conflicts between nations are human struggles, and Kabakov continues to appeal through his artwork and projects for ways to come between them and to help them.
Reference: Ship of Tolerance website: https://shipoftolerance.org/ (by Kabakov Foundation)

Oiwa Oscar expresses a world full of narrative and social satire in his powerful canvases. With his unique sense of humor and imagination, he continues to work while living and working in Sao Paulo, Tokyo, and New York. Born in Sao Paulo, the artist graduated in architecture and worked as an artist while working for an architectural firm in Tokyo. After receiving a scholarship, he moved to New York and continues to be based in the United States. Oiwa travels often and seems to be searching for his own identity rooted in multiple cultures while on the move. 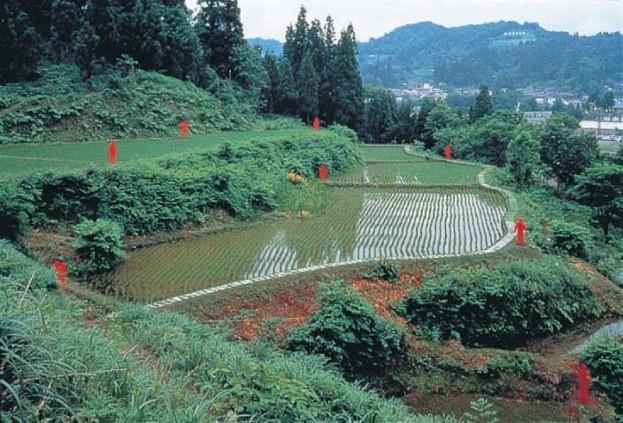 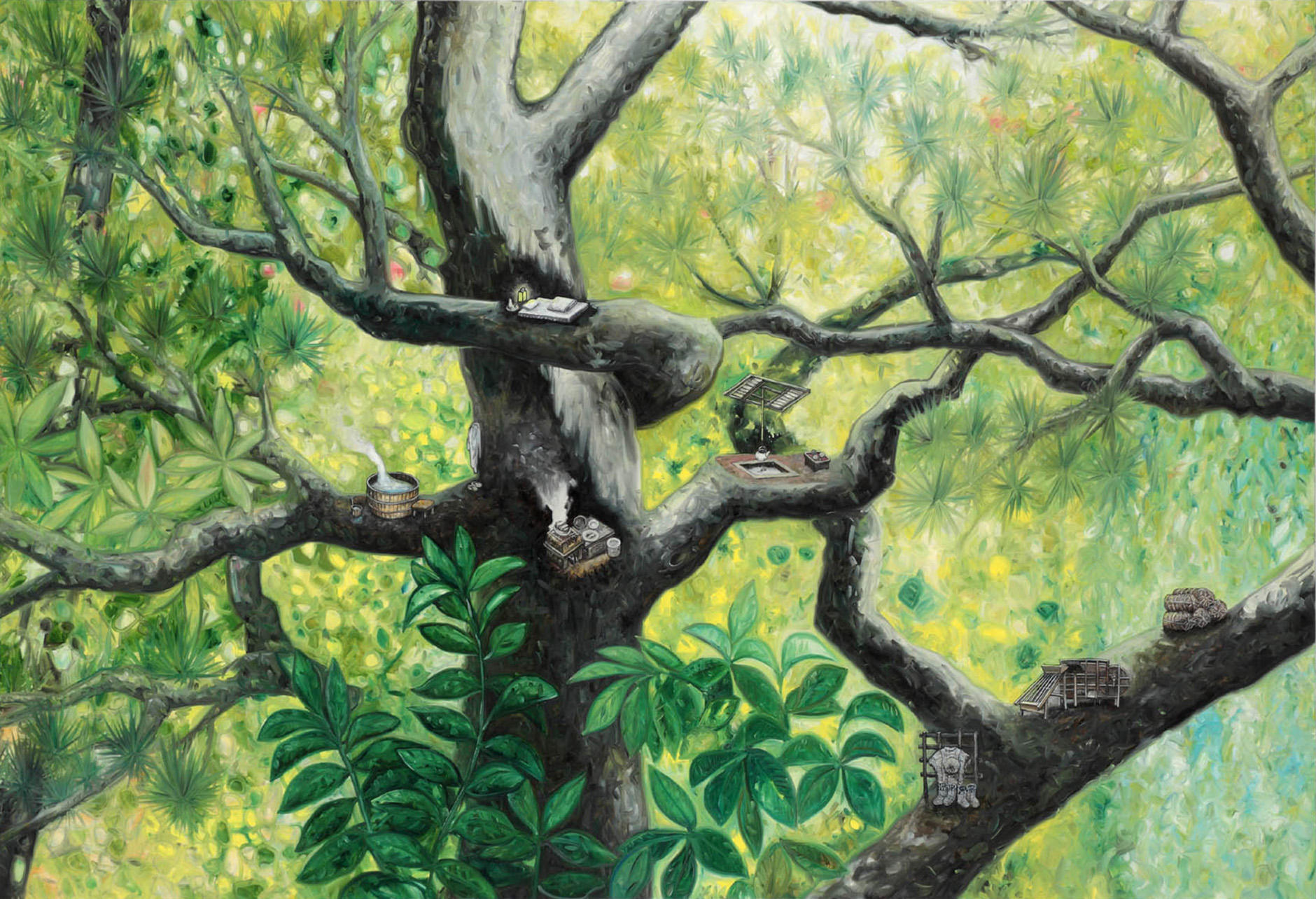 ”Beautiful Thatched House" (2009) oil on canvas 1303x1940mm
This work was painted in Tsumari. When he conducted research on the local area, including at the Museum of Ethnology in Niigata, he learned about traditional customs and architectural spaces, and painted hearths and rice bales on the branches of trees. The trees seem at first glance to be Brazilian jungle, but cherry blossoms, pine trees, and maple trees are painted in the lower left corner of the painting, which was also exhibited at the 2017 North Alps International Art Festival.

The Ogijima Pavilion, a collaboration with architect Shigeru Ban, is one of the highlights of the Setouchi Triennale. Ban creates structures out of paper tubes anywhere in the world, including disaster-stricken areas, and Oscar painted marine life all over the windows of the building. When the windows are slid open, the patterns overlap, and beyond them the islands of the Seto Inland Sea spread out. 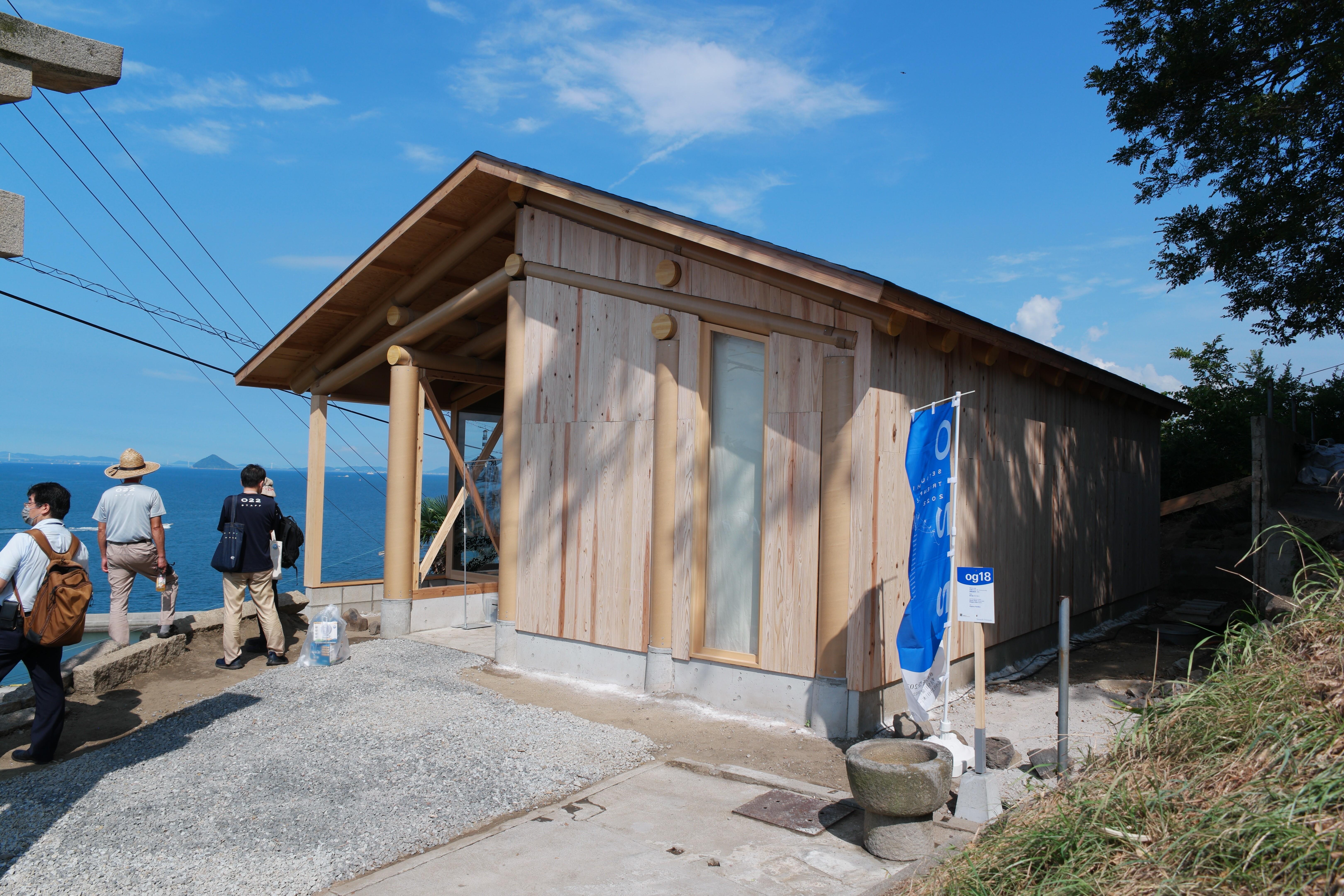 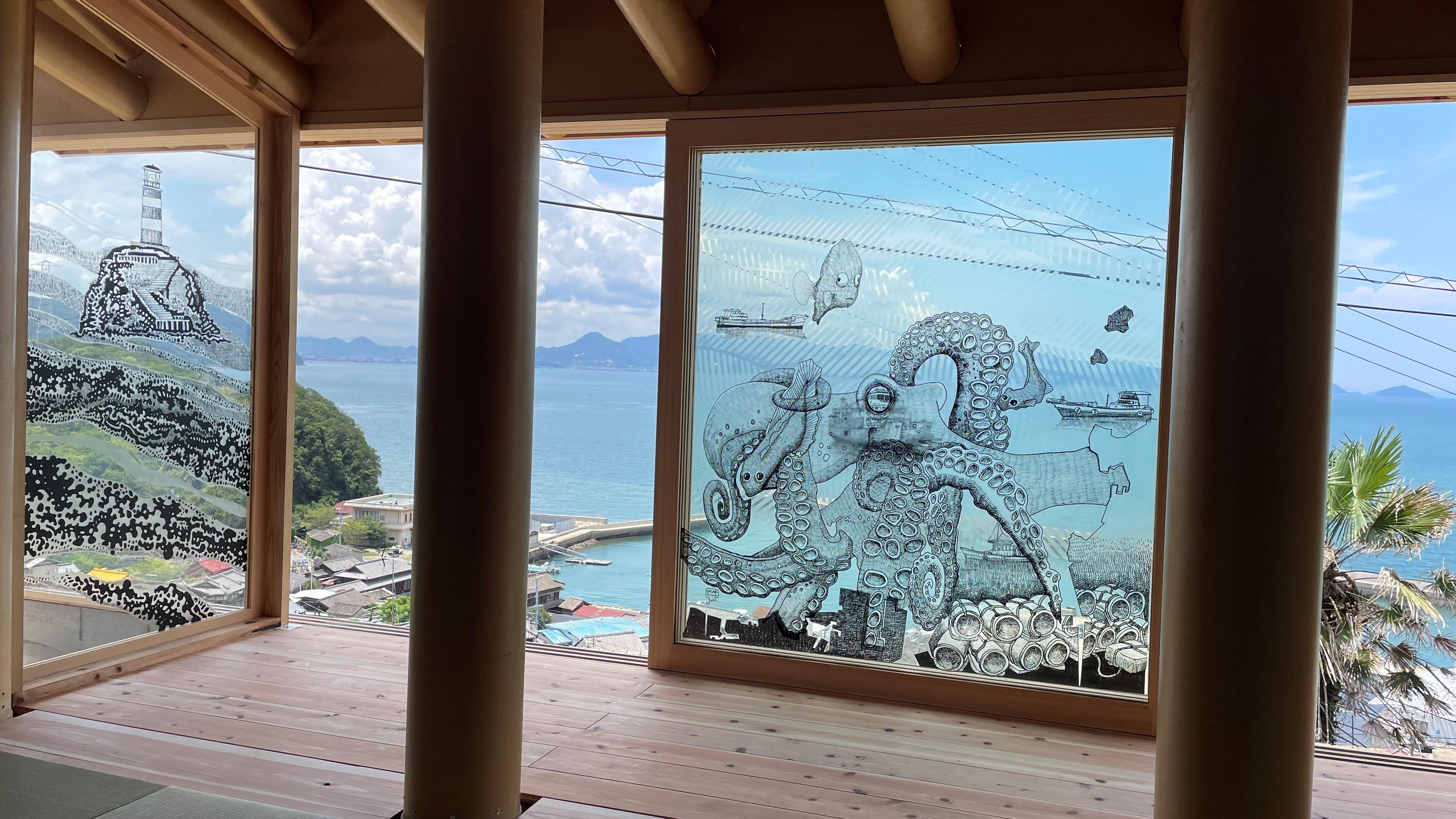 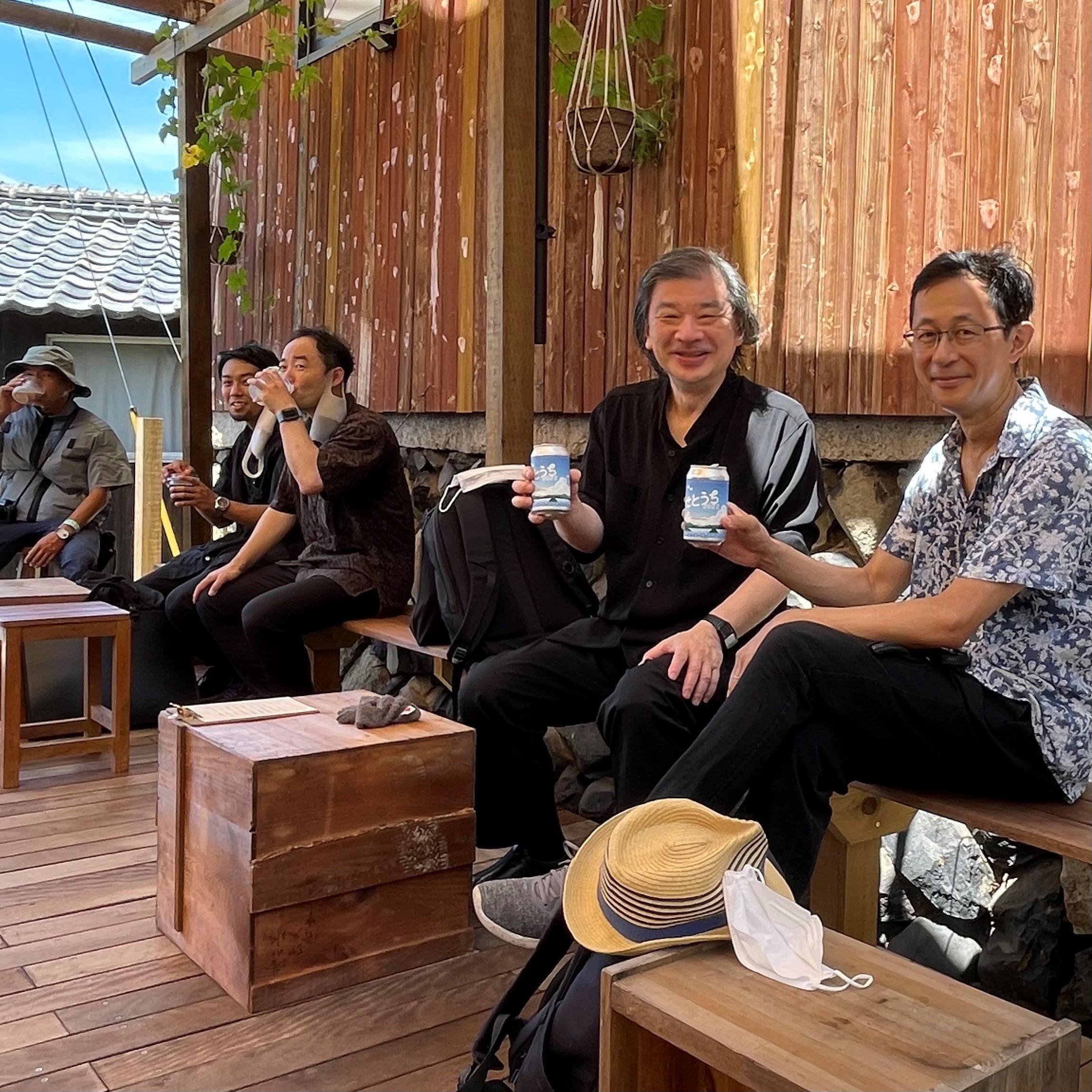 The Collection of the Earth exhibition will be open until November 13.
The museum will be open on Saturdays, Sundays, and holidays from 10h-16h in October and November. Please note the opening hours of the museum.