As a little child may start drawing once given a piece of blank paper, act of “drawing” seems to be equipped in human nature. The possibility of different facets of drawings in the context of both time and space can vary according to either materials or motifs to be depicted. In this exhibit, materials as well as its technique such as acrylic paint or oil pastel, silver ink, spray or marbling sumi ink will be showcased, shedding light on drawings of the environmental world around us.


Kana Kou, passed away in last spring, is known for her depiction of mountains and sea on the basis of her own experience of intervening in the grand nature. She once stated that oil pastel is a material which could catch up with the accelerating expectation of the artist when drawing in the grasp of surrounding landscape. In this work is also used transparent water color in the area of pebbles in the riverside, whereas the dense oil pastel covers the trees in the mountain side. The artist loved the various climate as well as geography, travelling to North Europe, LA in the US or Shodoshima Island in Japanese Inland Sea, registering her memory onto the paper. Other drawings in this line are on view as well. 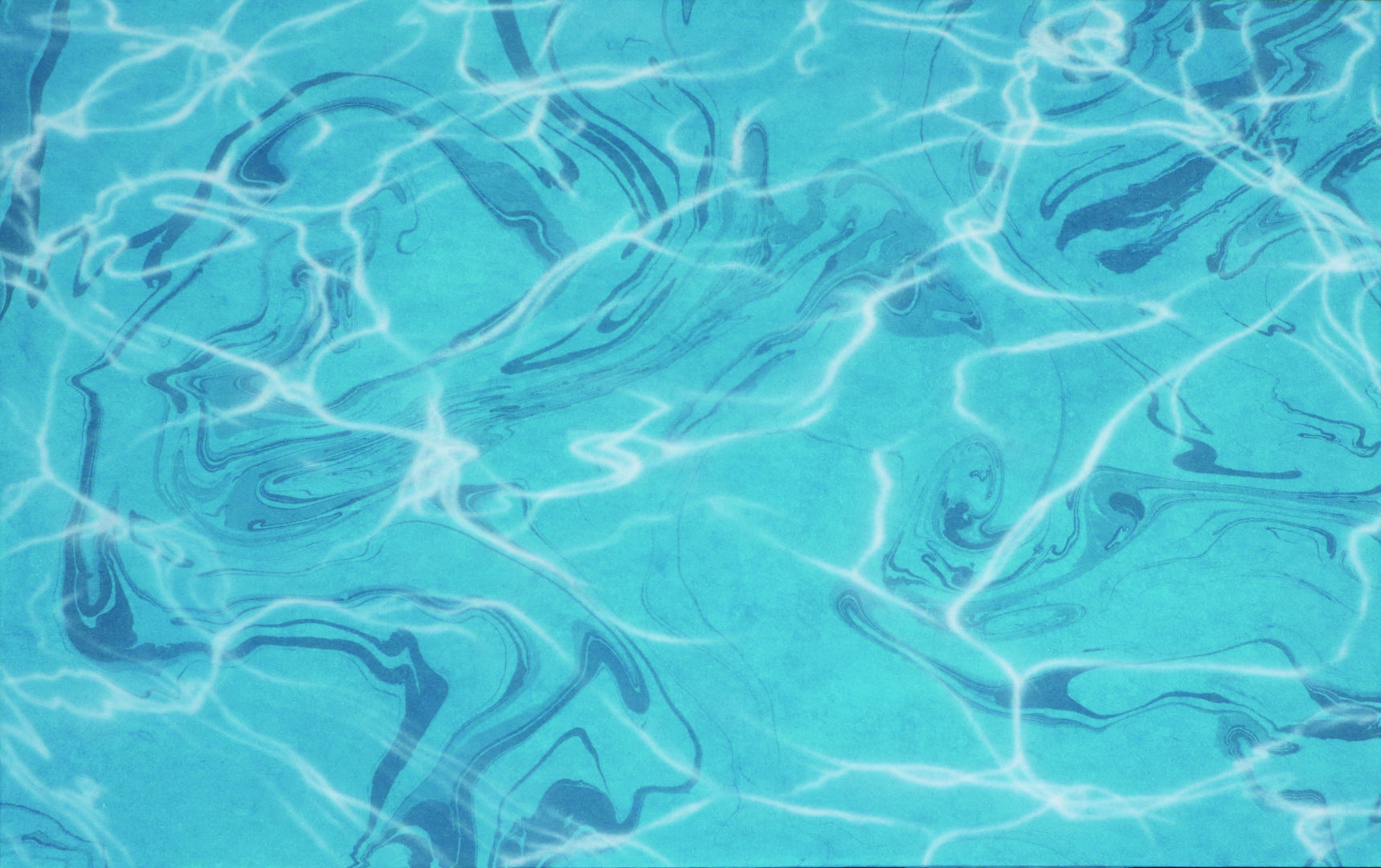 
Water surface series of Tokuro Sakamoto depicts the glittering water, ripple wave or diffused reflection of the light on the water, and is in the developed style of his all-over painting of water face. 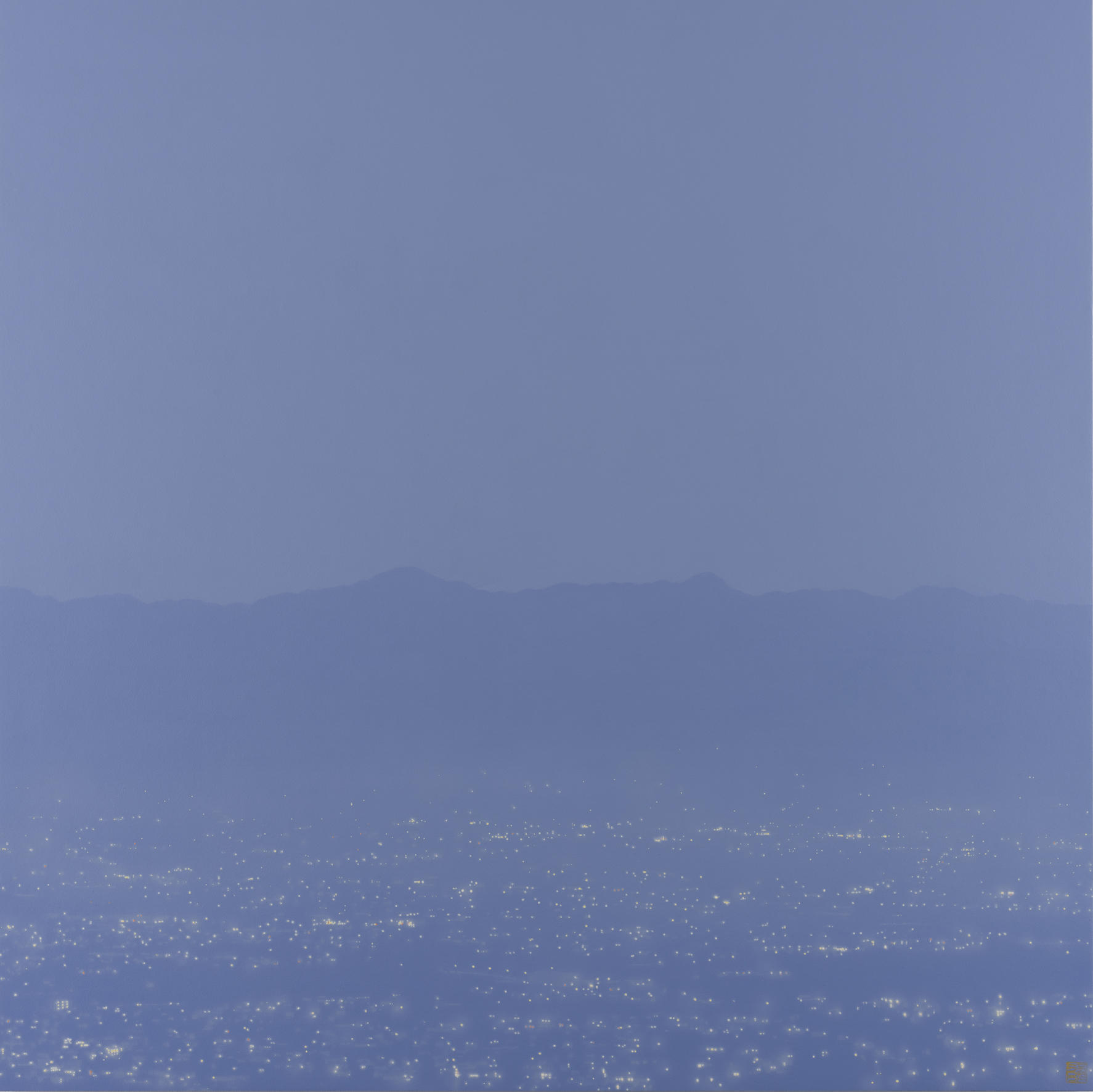 
In this case, the production process starts with marbling of sumi ink on the Japanese paper, on which the artist draws the lines of acrylic paint in free-hand. Combination of both accidental and realistic motifs generate the multi-layered sense of depth.
He also exhibits the work with more panoramic viewpoint. For example, “Evening View” of Kofu Basin where the artist lives nearby, reflects the scattered dots of evening light under the darkening sky. Minute touches of the brush works without its trace in use of thin brush conveys the atmosphere of the place through photographic representation. 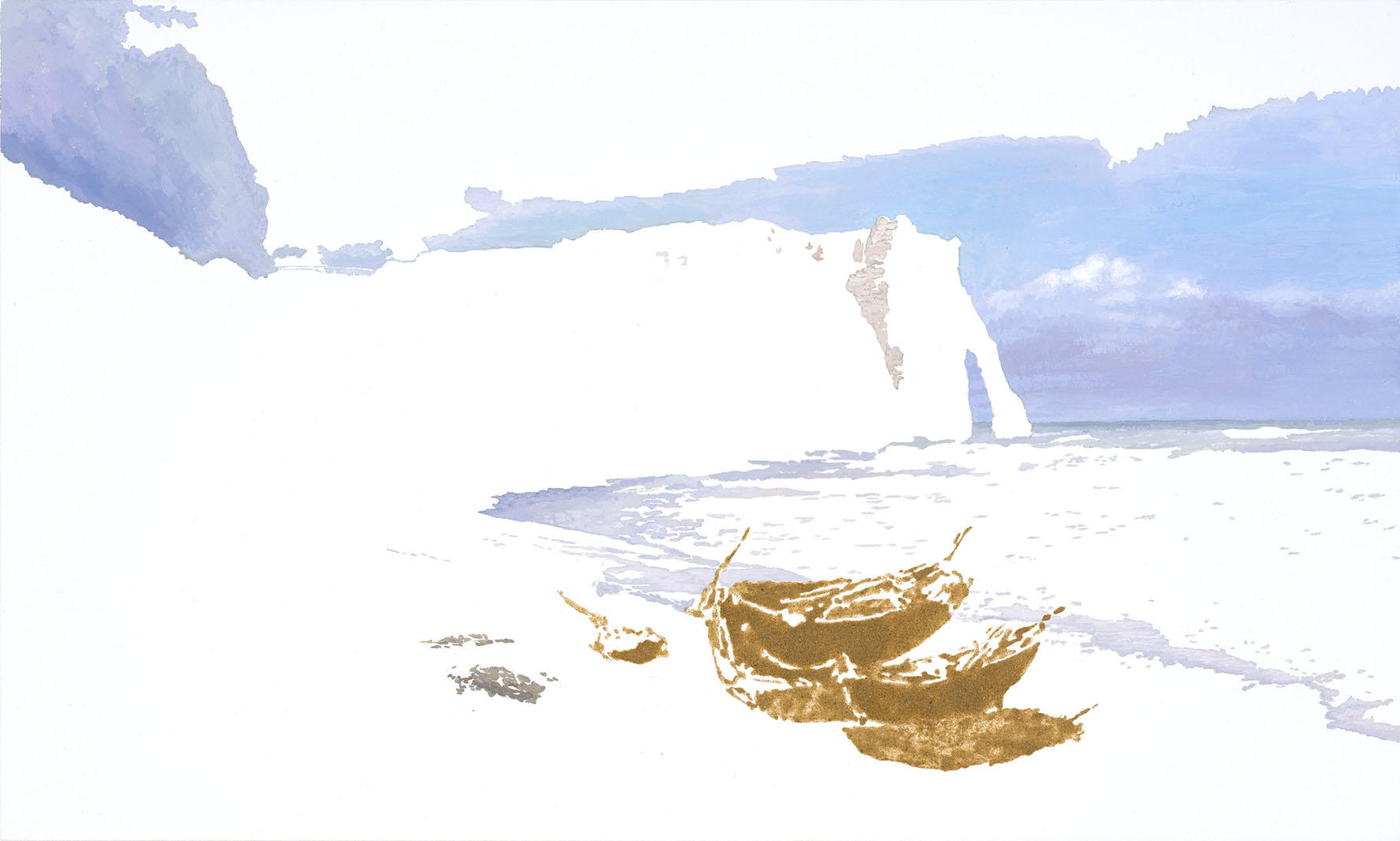 Nanjo often travels around to bring back the soil from the visited places, using the specific soil in his creation. Etretat in the Normandy is a scenic spot which has inspired various painters including Monet or Courbet, and Nanjo, looking after the composition of his predecessors, painted with the soil on the spot. This unique way enables him to install his own memory as a physical material.
Nanjo will participate in Oku-Noto Triennale 2020＋ held in Suzu City, Ishikawa Prefecture from September 4th. He will be in charge of Suzu Theater Museum as a director, while his own installation develops with the old wood ship and piano together with screen images. 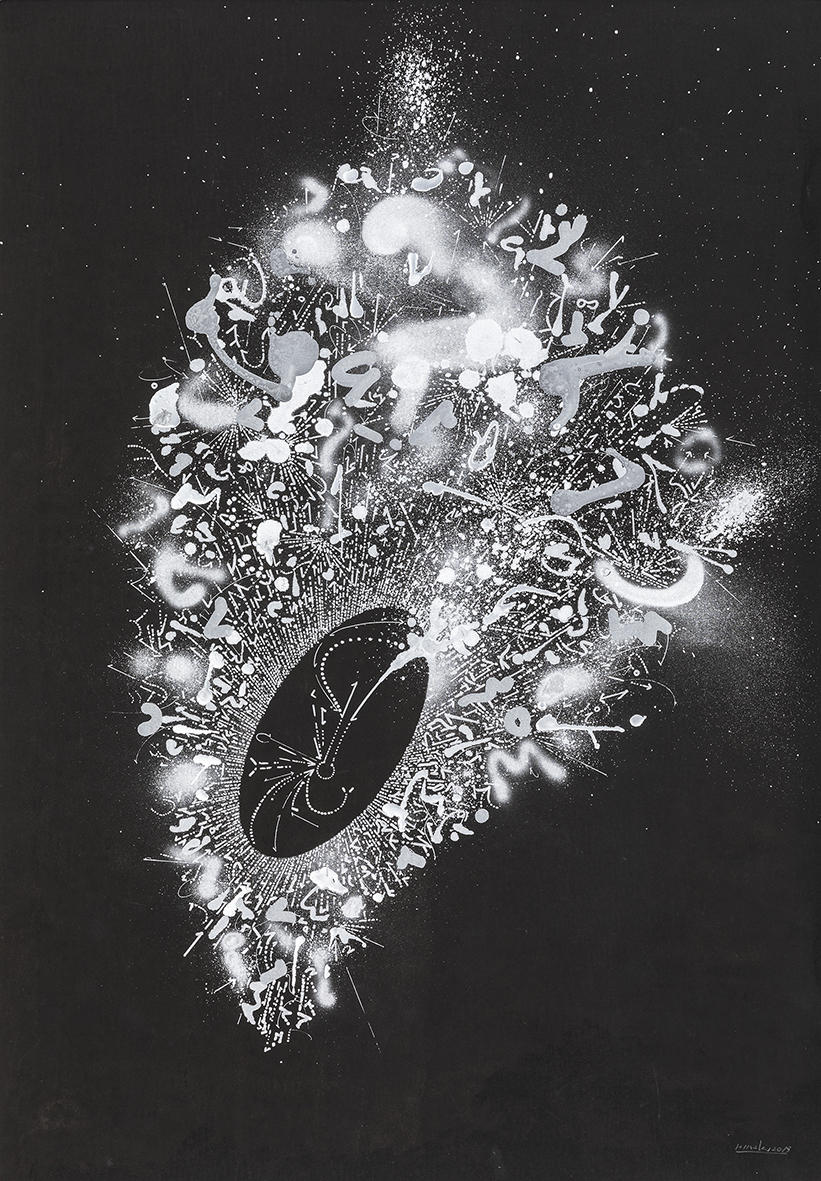 
Drawn in light-reflecting silver ink onto the jet-black paper permeated with Chinese ink, this piece entitled “Constellation” depicts the particle of light associated with lines to accumulate regularly sign or letters. Hiraku Suzuki, who considers “drawing” as an act between image and word, tries to enlarge the border of possible drawing through various means of two-dimensional works including wall paintings, sculptures and performance. Given a place belonging to a specific environment, the artist explores the history or topology of the place, leaving his own bodily trail or traces on it. In other words, he tries to apply the “excavation”, his interested methodology of archaeology since his childhood, to the urban space in present world, thus creating future ruins. Memories passing through multiple backgrounds, accompanied with musical rhythm on the plane, generate a line which unites past with future.


Also, a large work using reflector as material will be on view in this exhibition. The reflector, usually used in the street as a traffic sign, will be re-arranged as a fragment of ordinary sign of everyday life, will induces a dialogue with the viewer, reflecting the light in renewed junction. 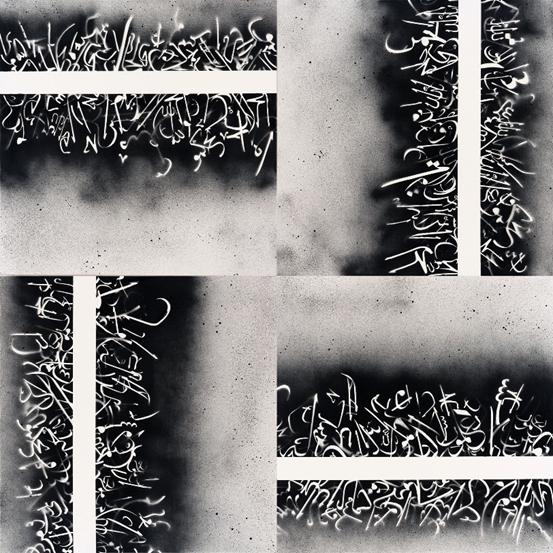 
Mounir Fatmi was born in Morocco, lived for long in France, and now works in Spain. He is worldly known for his broad range of the motifs of religion, language and education all swiftly integrated in his work. This piece was painted with spray using stainless cutouts meaning the Koran in Arabic letters. It is composed of four units of paintings which could also be juxtaposed horizontally. While Fatmi is familiar with the Western religion or culture, he always keeps on his viewpoint from the “periphery”, representing his own multi-identities through materials in everyday life.


Leading artist in Indonesia, Eko Nugroho participated in the last Oku-Noto Triennnale (2017) or Setouchi Triennale (2019), developing a wall painting in an abandoned house in Ibuki Island. This time, the exhibited works are monochrome drawing with swift brush works. According to Eko, the masked people depicted reflects the changing form of communication where the people communicate with absent view. 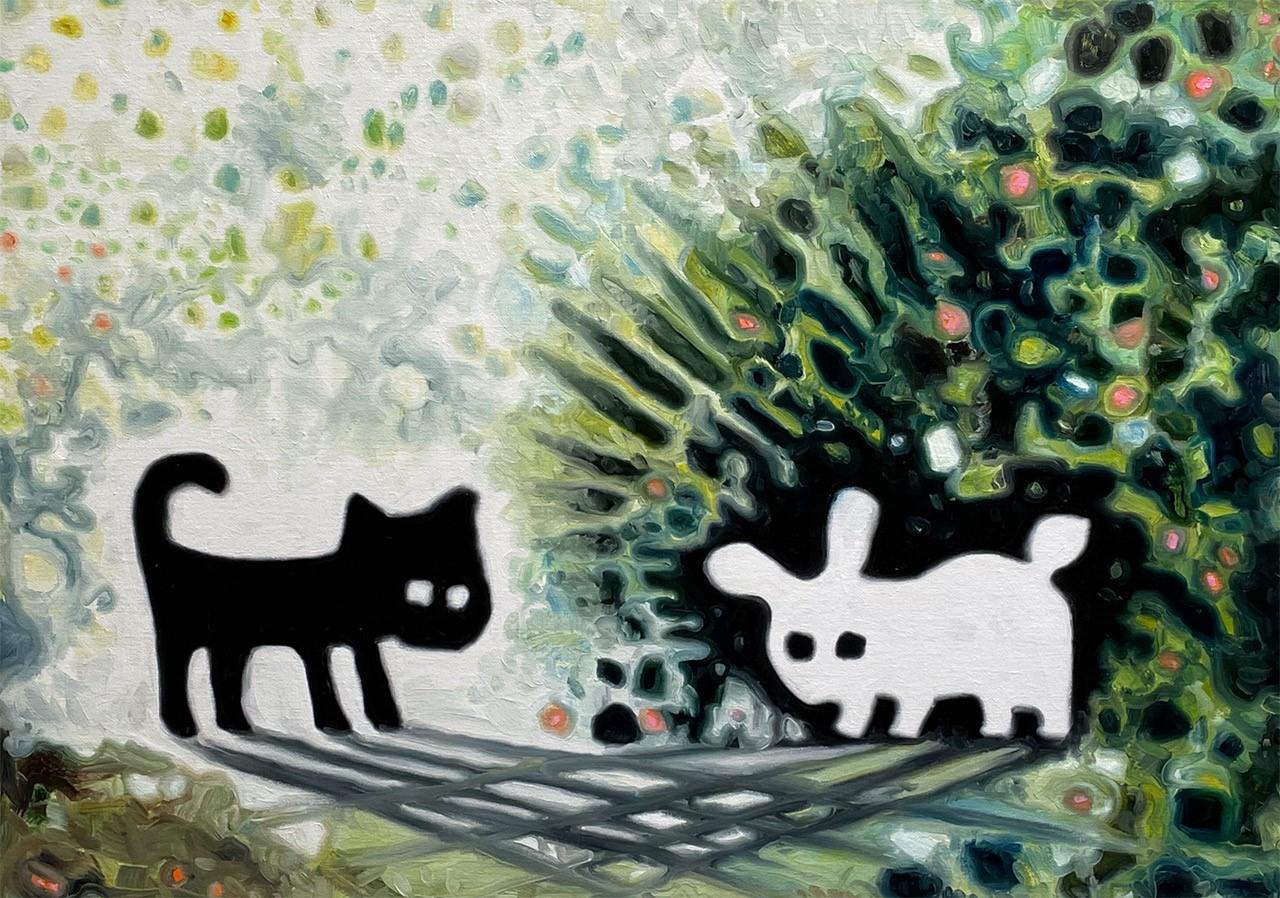 
Oscar Oiwa often draws in walls using maker pen and used to dream an imaginary trip in his childhood through such monochrome drawings. Shadow cats and light rabbit is one of the regular players in his trip, and was originally inspired with the band of hares in the airport in France running away in the dusk.
Oscar is currently on view at the exhibition "MOT Collection: Journals", Museum of Contemporary Art, Tokyo. We appreciate your kind visit to this temporary exhibit.